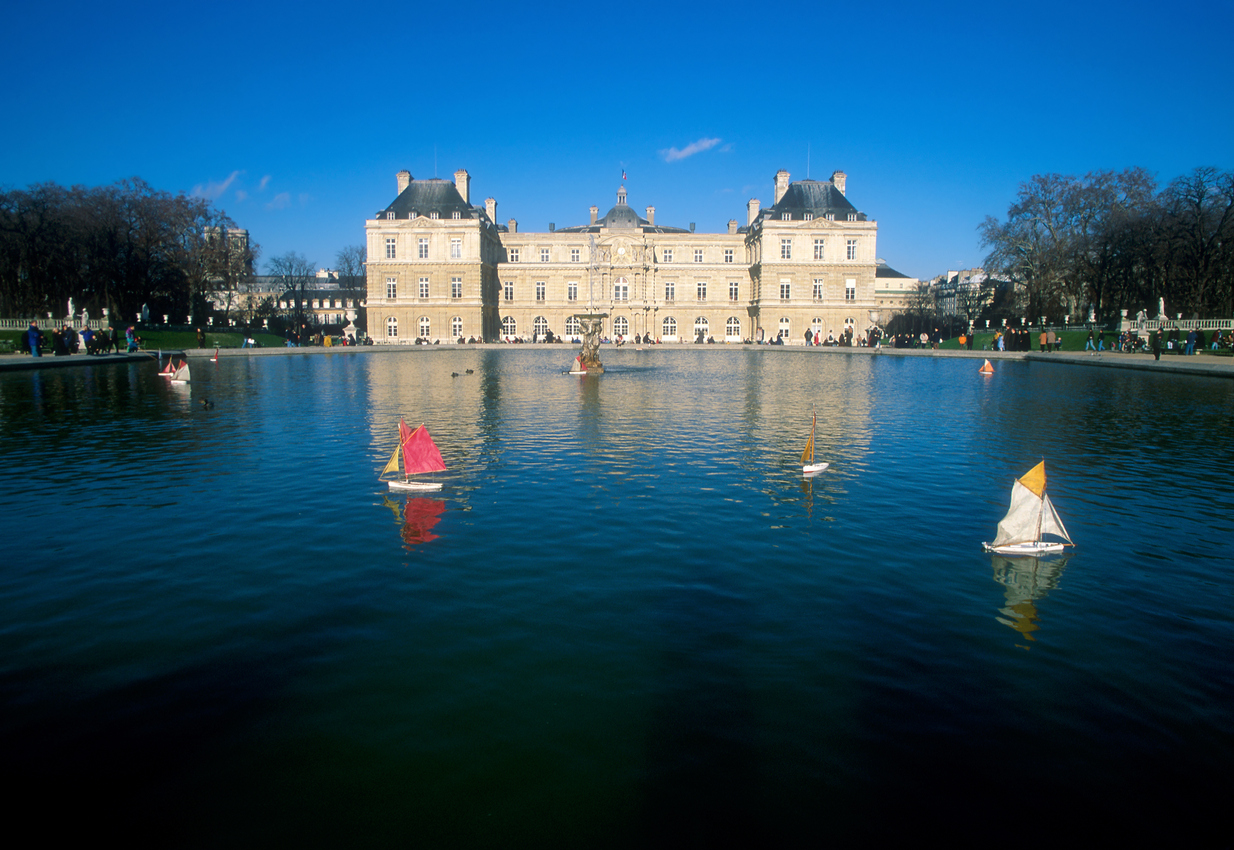 For all the justly celebrated and iconic landmarks, museums, and districts of the City of Light, from Notre-Dame, the Eiffel Tower, and the Louvre to the Champs Elysées, the Left Bank, Montmartre, and the Marais – let us not forget its many lovely and historic parcs, which of course come especially alive in the summer – and are of course especially à propos for social distancing in our pandemic “new norml”. Here are the half dozen which should be on your green radar:

The most central and the most likely to be seen by visitors thanks to being next door to the Louvre, the onetime garden of the royal Tuiléries Palace (top) stretches across 22.4 hectares (55 acres) between that world famous museum and the Place de la Concorde. It’s also Paris‘ oldest extant park, first created in 1564, opened to the public a century later, and nationalised after the French Revolution of 1789.

It’s basically a big rectangle of manicured lawns, hedges, flower beds, and forested patches, all anchored by a pair of large water basins (one round, one octagonal) and bisected by a grande allée promenade – this and other walkways lined with statues including four of Auguste Rodin (one of them a copy of his famous The Thinker). In the middle is the Café des Marronniers – delightful for a drink or bite under the chestnut trees – and at its western end you’ll find a pair of small museums: the Musée de l’Orangerie displays an Impressionist collection including Claude Monet‘s “water lilies” series and hosts exhibitions such as this summer’s, of the metaphysical works of Giorgio di Chirico. Across from it, the neoclassical Jeu de Paume National Gallery hosts exhibitions of contemporary photography and media. From late June through late August, the Fête des Tuileries brings some 60 rides, games, and food stands in for some summer family fun.

Almost identical in size but somewhat different in layout, over on the Left Bank of the Seine near the Palais du Luxembourg (which now houses the French national senate), this 23ha (57-acre) spread dating back to 1612 is perhaps even more than the Tuilèries a favourite and famously peaceful warm-weather retreat of many Parisiens, who stroll its tree-lined gravel walkways; hang out on its benches and lawns; contemplate its elaborate 17th-century Medici Fountain and 19th-century Fountain of the Observatory; and (if they’re enfants) sail radio-controlled model sailboats – available here for rent – on the octagonal water basin at its centre. Kids are especially catered to in this park, with playground, a vintage carousel, and a puppet theatre amidst apple and pear trees. Other amenities include a gazebo (which sometimes hosts live music) an orangerie which besides being a plant nursery also hosts warm-weather photo and art exhibitions, a half dozen tennis courts; a basketball court; and a (somewhat pricey) café. You might also spot a martial arts or tai chi class under the trees.

The Luxembourg is also noted for its many statues – about a hundred of them, About a hundred statues, most notably Liberty Enlightening the World, the 1870 first model by Frédéric Bartholdi of his magnum opus, the Statue of Liberty in New York Harbour) and 20 “Queens of France and Illustrious Women” (who were also either royals/aristocrats, like Mary, Queen of Scots or saints, like Geneviève, patron saint of Paris). As they say, cherchez la femme…

The city’s largest green space of all (just under 10 square kilometres/four sq. miles) lies out on its eastern edge, reachable via Metro (Line 1, Château de Vincennes station). Founded in the 12th century as a royal hunting estate, it was opened to the public by King Louis XV in the early 18th century, then formally reconstructed as a public park in the 1860s under Emperor Napoleon III.

As you can perhaps imagine, on a spread this size there’s room for a lot of nature and recreational options. Besides woods, lawns, monuments, statuary, and paths for strolling, skating, and biking, notable features include four lakes (with boat rentals and one with three little islands, one of which is home to the ruins of a medieval monastery); a 31ha (77-acre) floral park; an arboretum; a tropical garden with four glass-in pavillions; the Cartoucherie de Vincennes theatre; the Hippodrome racetrack and concert venue; and the thousand-animal, 14.5ha (36-acre) Paris Zoo; a Buddhist centre and temple; several restaurants and cafés; and especially for the little ones, a carousel and farm/petting zoo. And then of course there’s the onetime royal hunting lodge, the rectangular, very medieval-castlelike Château de Vincennes, complete with a moat an imposing 52-metre-high (171-foot) keep; you can tour the inside, but there’s little more than bare walls, with no furnishings nor exhibits.

Way across town on its western edge, Paris’ other major forest park is slightly smaller (845 ha/2,088 acres) but a similarly fetching refuge from the city’s urban hustle. Besides its woodsy areas and lawns, you’ll find an English-style landscape gardens with several lakes (complete with various waterfowl) and a little waterfall, along with two smaller botanical and landscape gardens as well as a greenhouse complex, the Jardins des Serres d’Auteuil, with around 100,000 plants. There are plenty of other attractions out here, as well, starting with the pink Château de Bagatelle (a relatively small, neoclassical hunting lodge, built in 1777, with surrounding formal gardens and period-furnished interior open to visitors) and the white Pré-Catalan, opened as a restaurant in 1856 and now the domain of three-Michelin-star chef Frédéric Anton. (another 19th-century manse is open to La Grande Escalade, with one star, and various other less grandiose eateries can be found throughout the park).

You can take in some contemporary art at the Fondation Louis Vuitton with its funky-mod architecture. And there’s a kiddy park here, as well, the Jardin d’Acclimation, with some farm animals, birds, and nearly 50 rides from mild to mildly wild. In season, you can catch a horse race at not one but two tracks, Longchamp and Auteuil., or a tennis game at the Stade Roland-Garros (home of the French Open). And finally, a quick note: keep in mind – especially when going with kids – that some of the woodsier areas, late afternoon and evening, you may spot “working girls” hanging out to solicit business. Not dangerous, just FYI.

This 8.2ha (20-acre) wedge in the city’s northeast 8th arrondissement, along quiet, leafy  Boulevard de Courcelles and just a seven-minute stroll from the Arc de Triomphe, may not be one of Paris’ bigger parks, but it’s a charming little jewel – it certainly charmed Claude Monet, who painted it six times.  Built in the late 18th century under the patronage of the Duke of Chartres, Monceau is landscaped as an English garden – that is to say, not an exercise in symmetry and formality but rather an elegantly idealised form of nature. Here behind high, wrought-iron fencing you’ll find curved, bench-lined pathways; a duck pond and little bridge-forded waterways; tiny waterfalls; and lawns set against groves of trees. It’s all punctuated by shrubbery and flower beds as well as statues and “follies” (scaled-down architectural structures) including a neoclassical rotunda at the main entrance; a classical-Roman-style colonnade and Corinthian Greek pillars; miniature ancient-Egyptian-style pyramid; and a Japanese stone lantern. All that’s rounded out by play areas, pony rides, and a merry-g0-round for children. Truly a sympathique little oasis amid the urban hubbub.

A bit larger and of somewhat later vintage, this park in the southern 14th arrondissement has a somewhat different vibe, thanks in part to its location next to the Cité Universitaire – meaning this 15.5ha (38-acre) spread is a major hangout for uni students. Created like Bois de Vincennes and Bois de Boulogne under Emperor Napoleon III in 1869 by the famous Baron Haussman, Montsouris has wide, sloping lawns; several wooded hills; a good-size pond with ducks, geese, and turtles; a reservoir that’s the source of a third of Parisians’ drinking water; a cascade; and a profusion of shrubs, flowers, and trees including horse chestnuts, cedars, yews, and weeping birches. But apart from that, fewer bells and whistles than the five others on this list, besides a few inevitable statues as well as a café; a playground and pony rides for les enfants; a guignol puppet theatre which stages performances from May through September; and a bandstand which often hosts free concerts in warm weather. Also très sympathique!