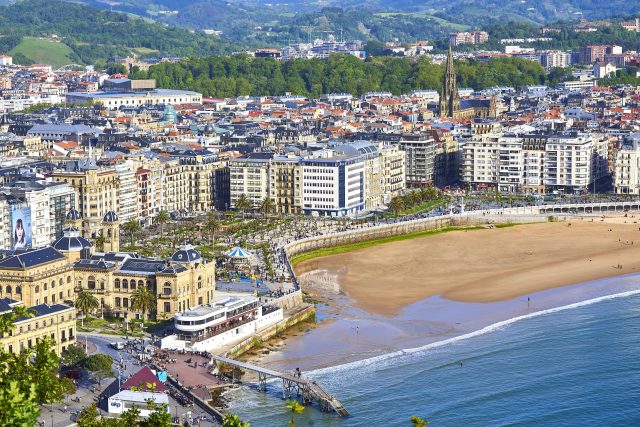 A couple of weeks ago this blog published a post about one of the world’s most gracious cities, astride the Bay of Biscay in Spain‘s northerly Basque Country, but beyond the handsomeness and sheer charisma of San Sebastián (Donostia in Basque), let me take the opportunity to get a little more into the aspects – both the classic and cutting-edge yang, sophisticated and accessible, elegant yet practical – that make this city such a delight for visitors. This time I won’t be looking at its crown jewel, the Bahía de la Concha (Seashell Bay), nor its fine museums, nor its famous festivals, such as the San Sebastián International Film Festival. Instead, I’m simply going to roam its streets of two key districts: the old town, La Parte Vieja and the Barrio de Gros. Come along with me! 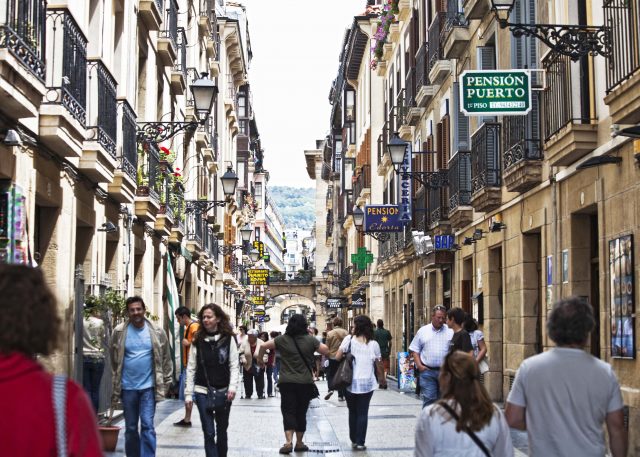 Though it’s called “the Old Part”, the Parte Vieja (also known, in Basque, as Alde Zaharra) isn’t actually the oldest district in town; that honour goes to the Barrio Antiguo toward the western end of the bay). But it certainly has plenty of historic feel – and in addition it’s the centre of much social and cultural life for donostiarras (as locals are called).  Bounded by the Urumea River, the bay, and Monte Urgull, the hill at the bay’s eastern end, its main drag is cobblestone Calle 31 de Agosto, named after the date of a monumental fire in 1813 when during the independence war against the invading troops of Napoleon Bonaparte. In addition to many sites interesting to visitors – museums as well as iconic, mostly 19th- as well as some 18th-century buildings including of course churches – the Parte Vieja is home to myriad bars and cafés, many serving some of the city’s best pintxos (as tapas are known here in the Basque Country). 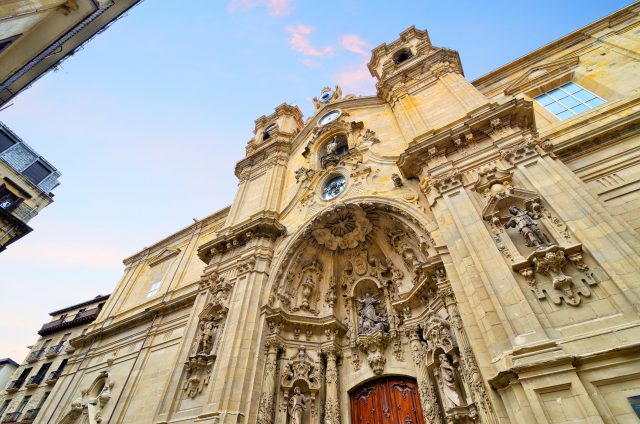 Speaking of churches, one of the district’s most prominent is the Baroque Basílica de Santa María del Coro on Calle Mayor. Finished in 1774, it’s so important locally that those baptised here, dubbed josemaritarras, are prominently mentioned in the San Sebastián March of the Tamborrada, the drumming extravaganza at the heart of the city’s 20 January celebration of the day of its patron saint. 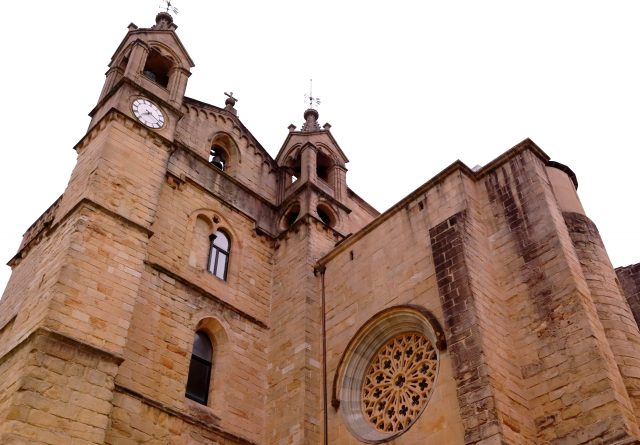 Another prominent house of worship, the 16th-century Gothic Church of San Vicente, is the city’s oldest, and home to an elaborate, multitier Romanesque altarpiece by artists Ambrosio de Bengoechea and Juan de Iriarte, with various panels depicting the Passion of Christ set amid gilt frames. 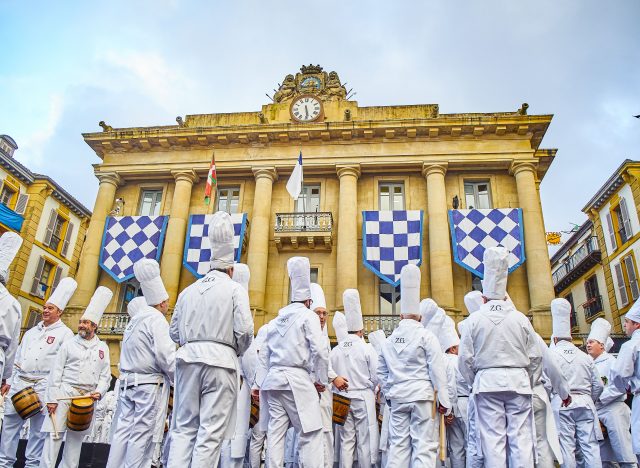 The heart and hub of the Parte Vieja, meanwhile, is the 213-year-old Plaza de la Constitución, (or “Plaza de la Consti”, as locals call it), presided over by the handsome neoclassical building that served as the city hall until the 1940s. Ringed by arcades and restaurants/cafés, it’s also the stage for many local festivals and events. Also, see those numbers on quite a few of the balconies above? Back in the day, the square was a venue for bullfights, and the balconies served as numbered viewing boxes. 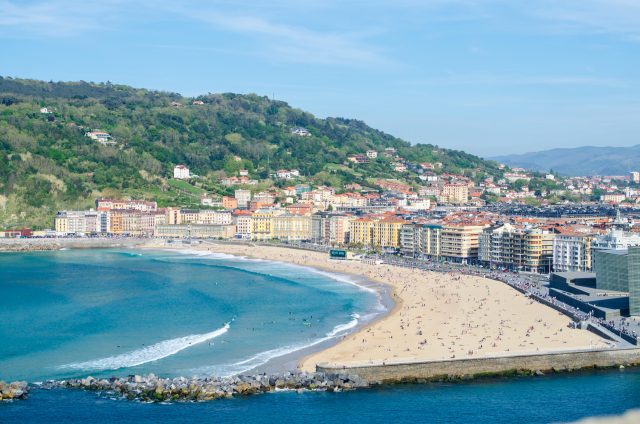 For a big contrast, to the north across the Urumea River is a very different-feeling district called Gros, dating back to the end of the 19th century and these days especially known for its sunsets; beaches; a sporty, youthful, and relaxed atmosphere; and cutting-edge cuisine, architecture, and shopping. 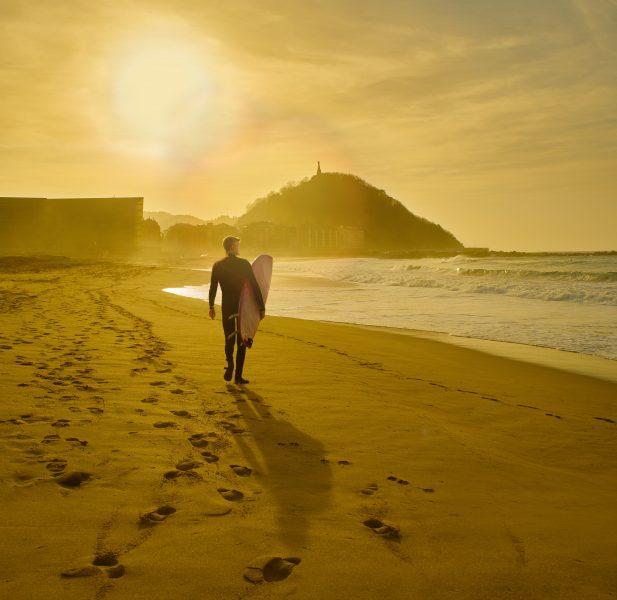 In many ways the centrepiece of Gros is one of San Sebastián’s three beaches, Zurriola Hondartza, an 800-metre (2,625 feet) strtetch of sand located between the mouth of the Urumea and the feet of  Mount Ulía – a haven for beach bunnies and especially surfers. 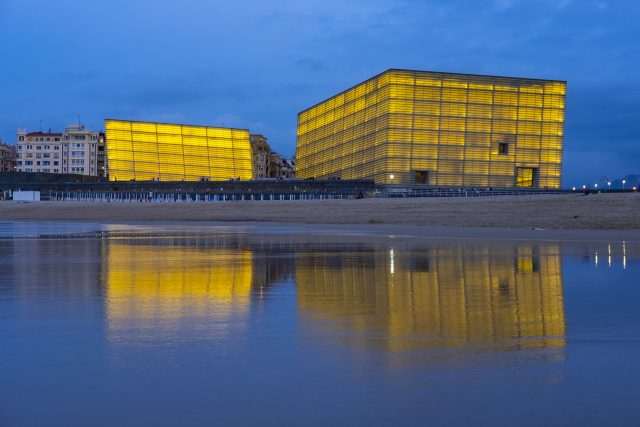 In terms of buildings and architectures, the star of Gros is indubitably the 21-year-old  Palacio del Kursaal, a venues for performances and events (including the famous annual film festival). It was designed by one of Spain’s top starchitects, Rafael Moneo, as a dramatic pair of prismatic cubes. 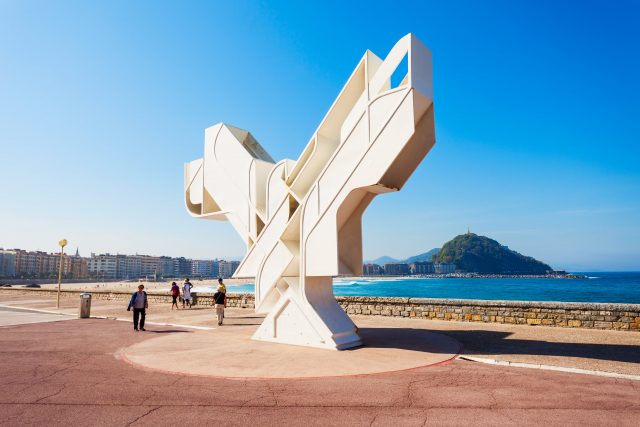 Right alongside Zurriola, a seafront promenade along a low wall called Sagüés. has become a favourite running, biking, and simply hanging-out spot for donostiarras. Its main landmark is an impressive abstract sculpture, dating from the late 1980s, called La Paloma de la Paz (The Dove of Peace), meant to remind us that dialogue should always be preferred before violence. It’s also a great spot to catch some of the city’s prettiest sunsets.

And by the way, if you can make it over to Gros on a Thursday, you can take advantage – as many young locals do – of the weekly Pintxopote, when the district’s pintxobars offer their savoury treats at reduced prices. 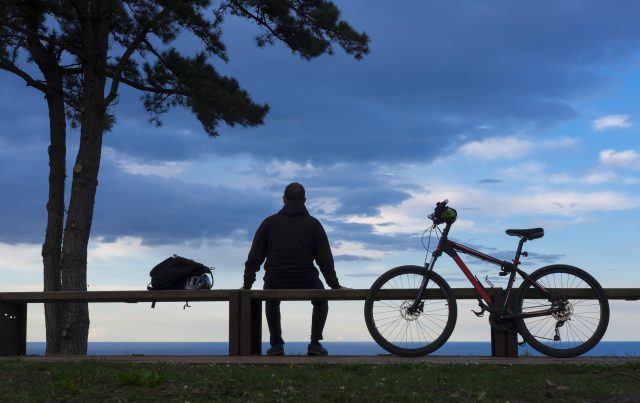 As for the aforementioned Mount Ulía, this green oasis of forests and cliffs rises 235m (770 ft.) and covers 320,000m₂ (79 acres), a recreation area offering a nice change of pace from the city streets or even the beach, with myriad strolling paths, picnic areas, playgrounds, a café/restaurant, a watchtower, and an “interpretation centre” with exhibits on the area’s flora and fauna.

So there you have it: two very different neighbourhoods but each very engaging in their own way, and essential parts of what makes San Sebastián the gem that it is.

For more info in English: SanSebastianTurismoa.eus.