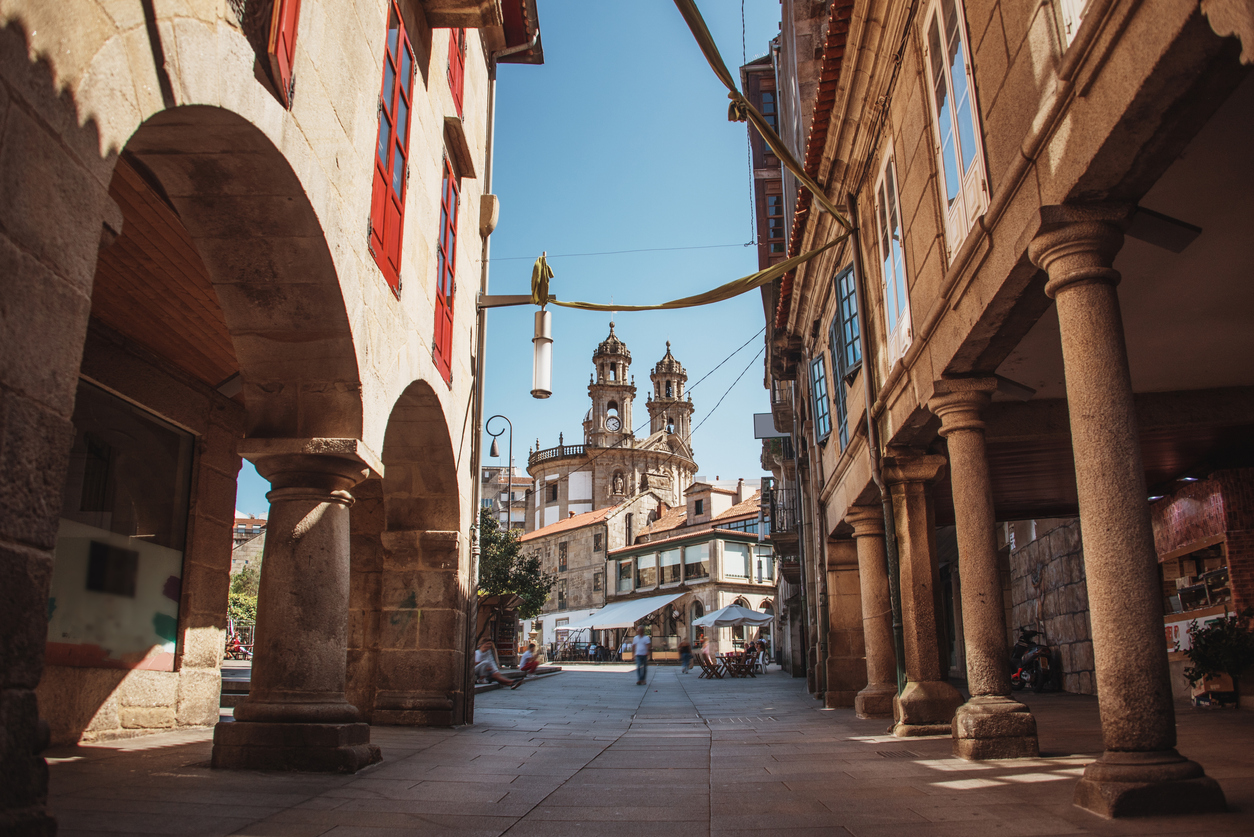 Once the largest of Galicia‘s cities and today number six (pop. 83,000), Pontevedra is a 45-minute drive or hourlong train ride south of Iberia gateway Santiago de Compostela. Its setting is beautiful, amid rocky cliffs and broad, sandy beaches at the tip of one of the four Rías Baixas (Lower Inlets), fjords which reach into the coastline from the Atlantic Ocean like long, salty fingers. Yet it can sometimes admittedly get overlooked in a community with bigger, more high profile urbs like Santiago, A Coruña, and Vigo.

As someone who knows Galicia, however, I can tell you that Pontevedra is a true gem for lots of  reasons, including its setting, historic architecture, culture, and liveliness – not to mention sheer liveability. For example, it’s made headlines in recent years for award-winning urbanisation schemes that among other improvements completely pedestrianised its elegant old quarter (the original medieval walled city), eliminating fumes and traffic, boosting access for locals and visitors alike, and making it a true delight to wander. May I introduce you? 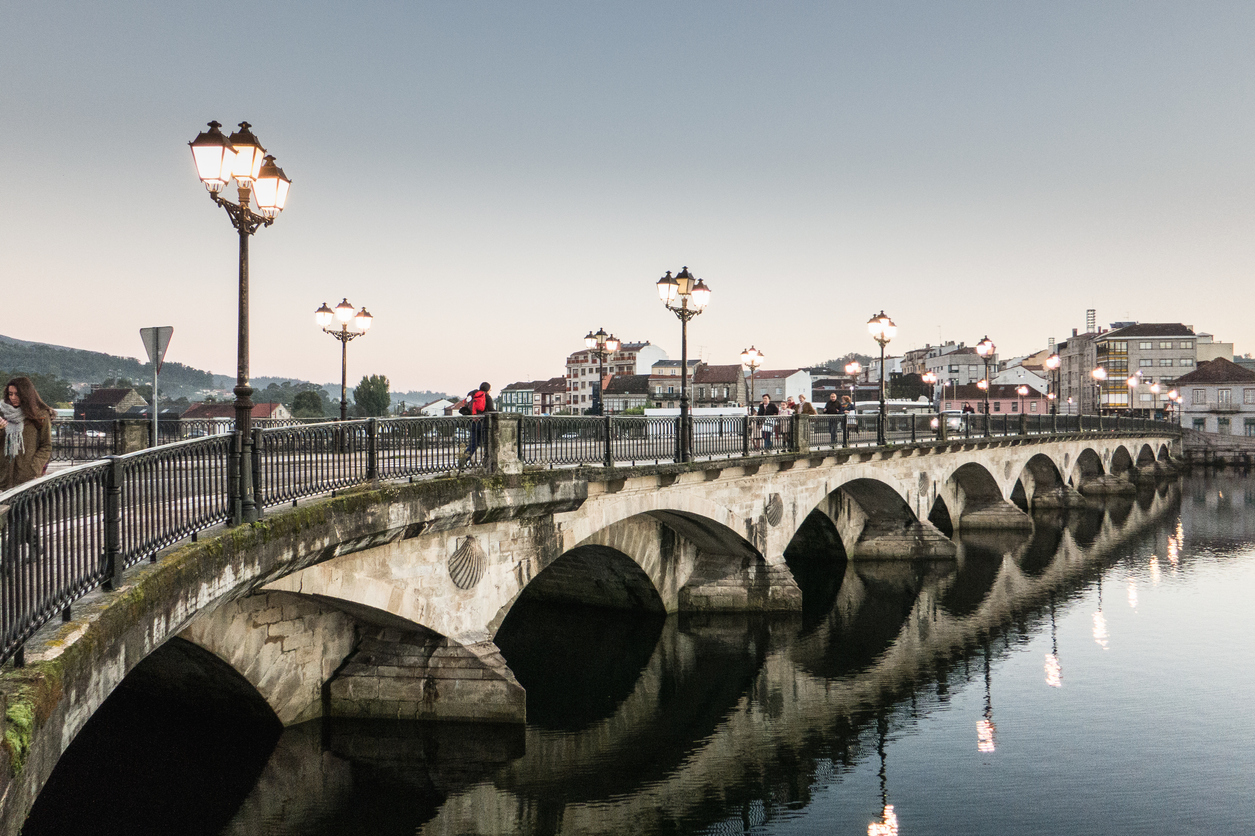 The capital of the Rías Baixas region has a long and proud history, dating back to 1st-century Roman Hispania, as during the Middle Ages came to be known in Latin as Pons Vetus, then corrupted to Ponte Vetera (Old Bridge), named for a Roman span over the local Lérez River. This bridge was replaced in the 15th century by the multi-arch Ponte do Burgo we see today, and the town became a strategic nexis of a trade network including other settlements such as Lugo, Astorga (now in Castile-León), and Braga, Portugal. Over the centuries it amassed a proud, history, strongly influenced by maritime traditions and the sea. Among other things, for example, some claim that it was here during Pontevedra’s peak as Galicia’s main port that it’s said the Santa Maria, one of the three ships sailed by Christopher Columbus, was constructed.

That history has left this city with a lovely old quarter which is, after Santiago’s, Galicia’s most important. Plazas are full of life with lively sidewalk cafés, friendly shopkeepers, and a population of pontevedreses which skews younger than the national average. Quite a few families still live in many of the pazos, fine manor houses built in the 16th and 17th centuries, marked by the family’s coat of arms, prominently displayed; others have been converted into upmarket boutique hotels, like Casa Do Barón on Rúa Barón, once the residence of the Counts of Maceda, now one of Spain’s network of quasi-publically-owned paradores (inns). 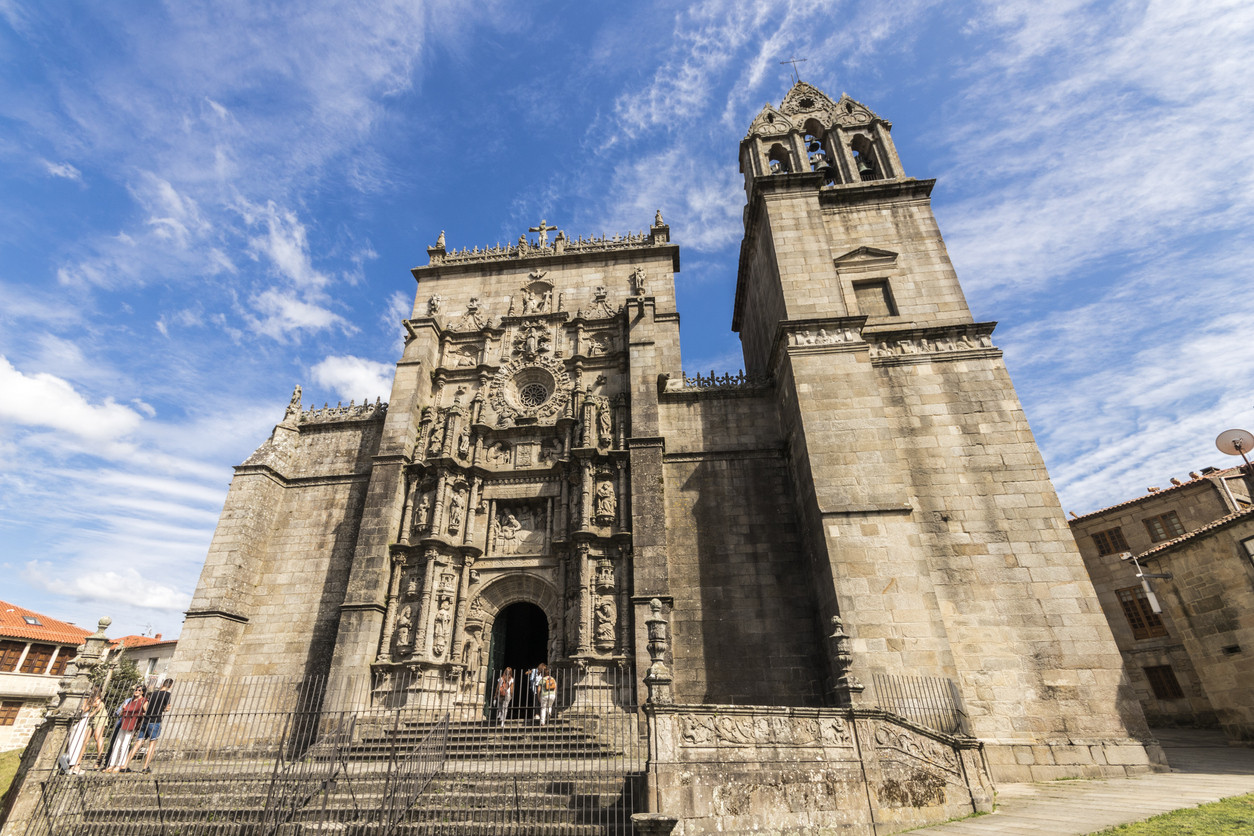 Landmarks not to miss include the 16th-century Gothic Basilica of Santa Maria a Maior;  financed by the seafarers guild, much of its façade is decorated in flamboyant Portuguese Manueline style (Galicia is culturally and linguistically akin to next-door Portugal), as well as incorporating maritime elements (look for the busts of Columbus and Hernán Cortés (conqueror of Mexico) depicted alongside the Catholic saints on the western façade). You can get the best view of the upper façade from the elongated adjacent square Praza de Alonso de Forseca, also home to the Rias Baixas tourism office.

There are a dozen or so of these wonderful prazas dotting the old quarter, including the quaint Praza de Leña (above), surrounded in part by a colonnade; nearby Praza da Verdura, named not for its trees but as the site of an old produce market; and one of the liveliest, Praza da Ferrería, lined with bars and restaurants, with its main landmarks the Igrexa de San Francisco, a doughty Gothic church built in the 13th and 14th centuries. 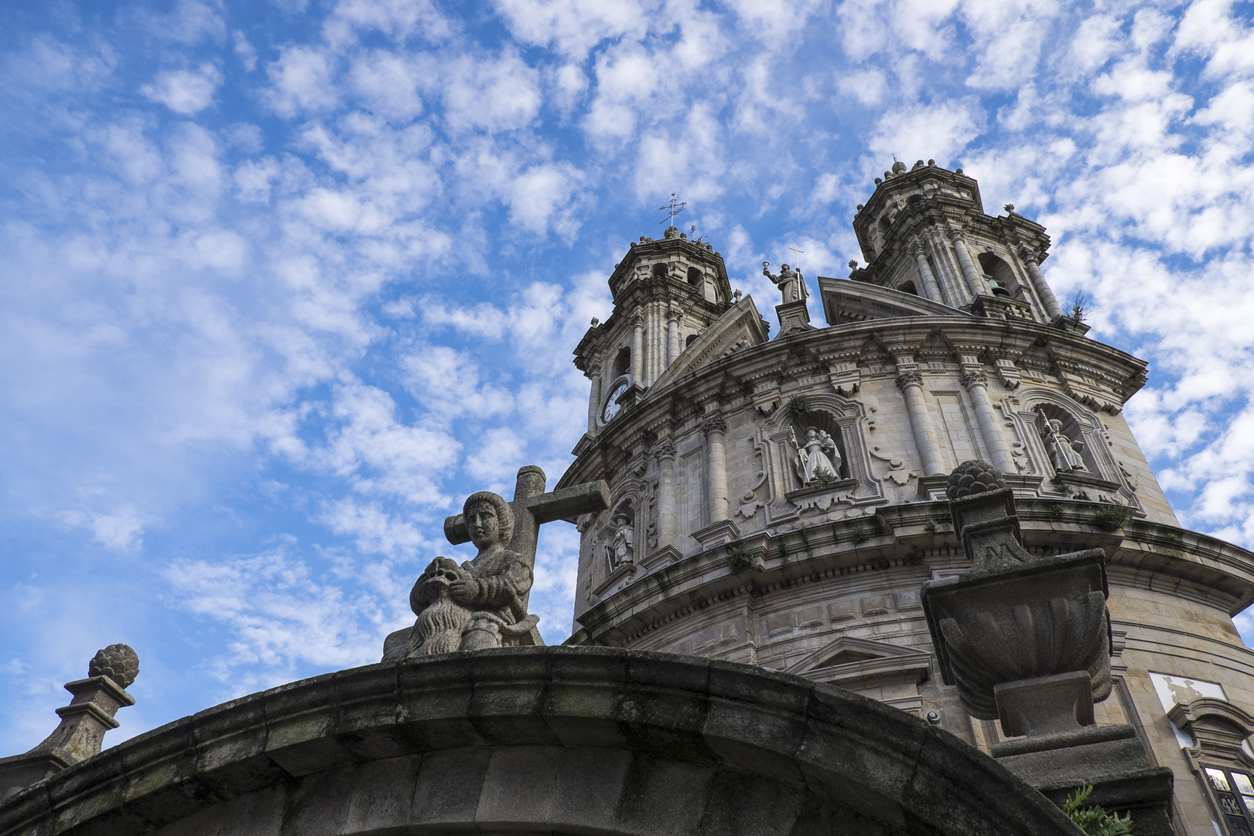 Speaking of which, another notable feature of the old town is its legacy as a major stop on the Camino for pilgrims walking from Portugal. Just off the Praza da Ferreria, for example, the Santuario da Virxe Peregrina (Sanctuary of the Pilgrim Madonna, above and top) is a late-18th-century chapel laid out like a scallop shell (a symbol of St. James) on whose distinctive rounded façade you can see the Virgin Mary – who’s also the patron saint of Pontevedra – kitted out as a pilgrim alongside St. James and her hubby St. Joseph. If you look closely you can spot scallop shells on the piers supporting each of the arches of iconic Burgos Bridge, as well. 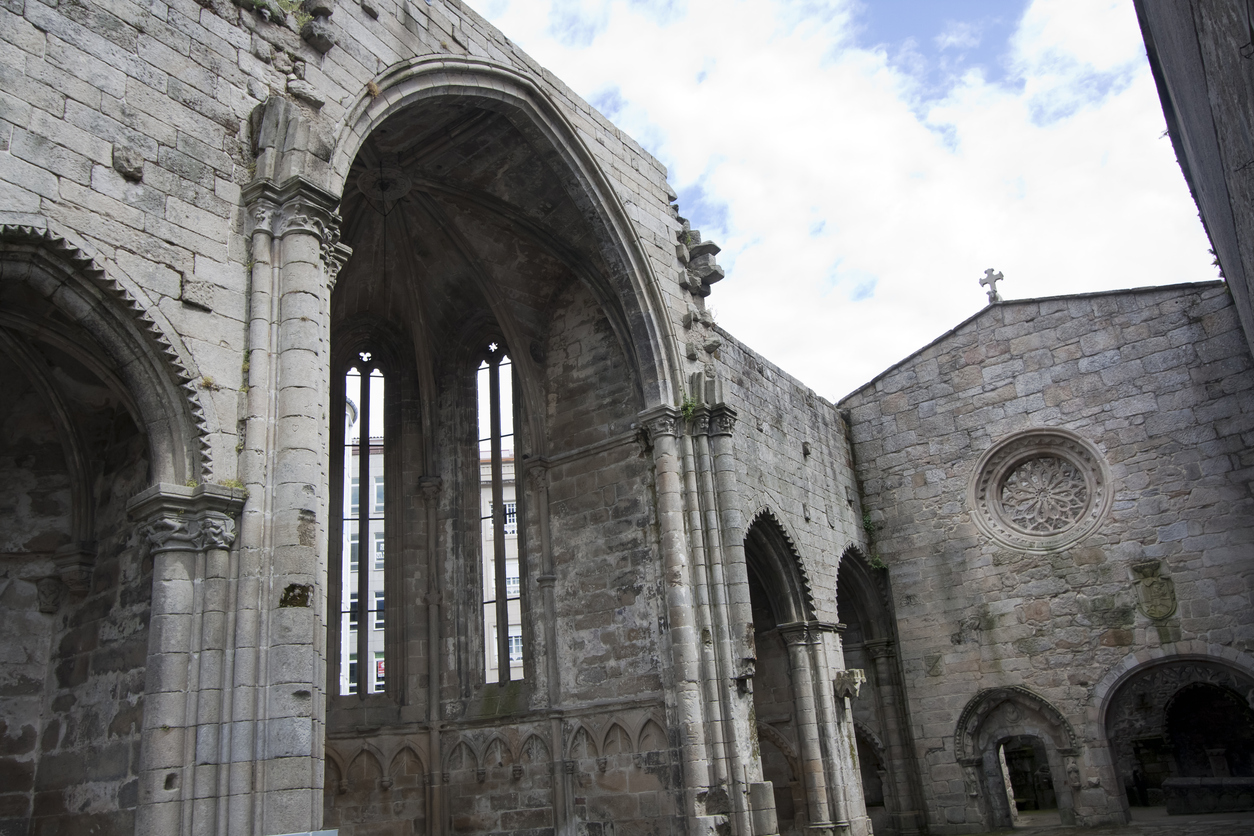 Also absolutely don’t miss the Museo de Pontevedra, one of Spain’s most comprehensive provincial museums – and not just because of its interesting collection of historic and archaeological artifacts dating back to prehistory and artwork including Spanish greats Salvador Dalí, Joan Miró, Esteban Murillo, Pablo Picasso, and Francisco de Zurbarán,  along with Italian and Flemish masters. Several of the five buildings amongst which it’s spread are landmarks in their own right, such as the Ruins of Santo  Domingo (above), what’s left of a 14th-century Dominican convent church (it was burned by the British in 1719) where amidst the atmospheric arches much of the museum’s medieval collection is housed, and the Edificio Sarmiento, an 18th-century college now home to contemporary Galician art along with temporary exhibitions.

Outside the centre, the Parque Illa das Esculturas across the river is a green retreat designed around modern granite sculptures placed along with a bridge-crossed canal in a natural, riverside setting beg contemplation and mindful strolls.  A bit farther afield still, in warm weather there are more than a hundred beaches to enjoy within easy reach of the city, with two notables including Praia de Mogor, just 20 minutes away, with golden sand with restaurants, pedal boats, and views of the Ría de Pontevedra estuary, and a half hour northwest, Praia A Lanzada (above), a 2,400-metre (7,874-foot) stretch of fine, white sand lies in a microclimate that’s usually several degrees warmer than the surrounding region. Besides strolling the beach and looking out into the vast expanse of the Atlantic Ocean (spotting the island of Ons in the distance, also a popular warm-weather beach destination of its own), there are cool spots to explore nearby, such as the ruins of an 8th-century fortress and its still standing Romanesque church; the remains of the 3rd-century Roman Adro Vello necropolis, villa, and temple (converted by the Visigoths into a church); chic resort town of Sanxenxo; and charming fishing village O Grove, known for its aquarium, its mid-October Festa do  Marisco (seafood festival) and the hot-springs spas of its A Toxa island. 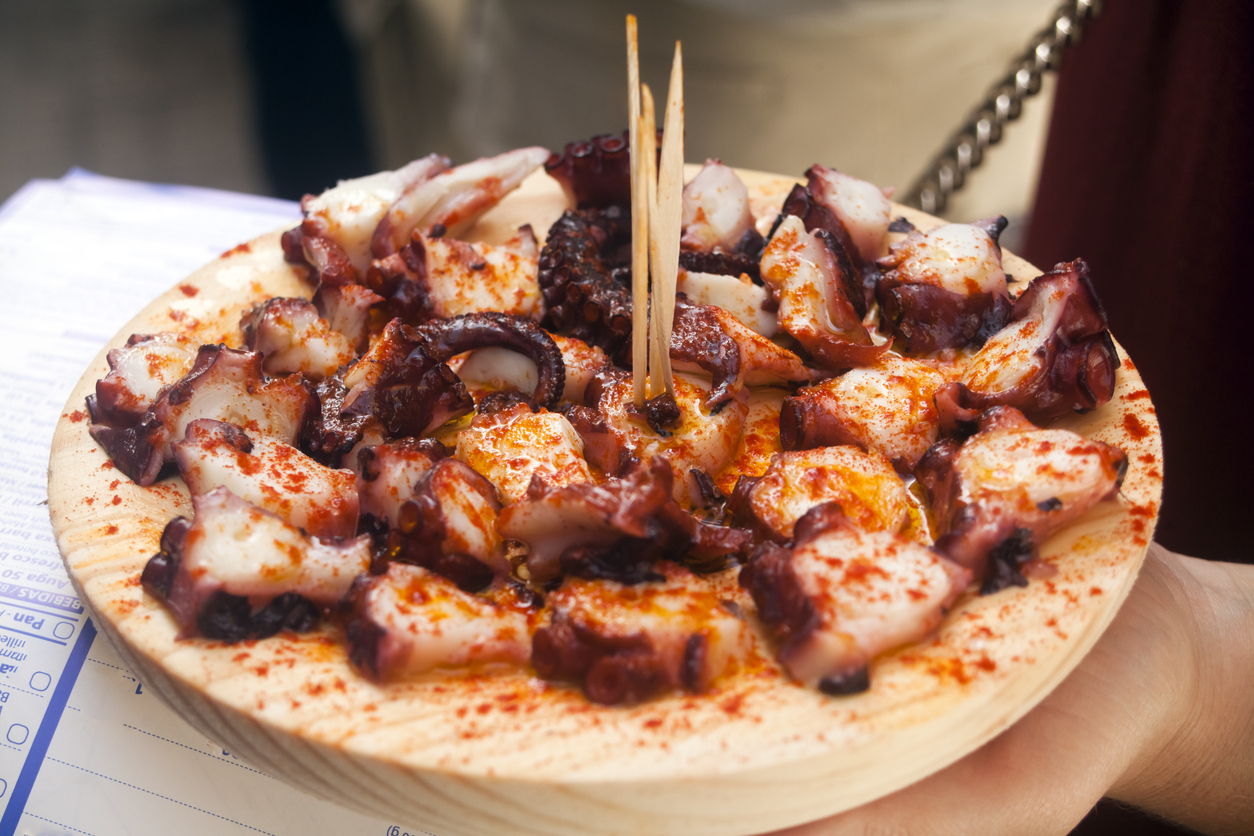 While you’re in Pontevedra, by all means take full advantage of its proximity to the ocean to sate yourself with fresh, high-quality seafood such as grilled or boiled polbo (octopus, above) and spider-crab croquettes; there are plenty of land offerings, as well, such as the local classic lacón con grelos (ham with turnip greens). Finish off with a lovely tarta de Santiago (marzipan pie) and wash it all down with Galicia’s crisp white Albariño wine, or perhaps a dry Galician sidra (cider). You can check out a lot of the goods right off the boat at the Mercado Municipal on the river, not to mention rubbing shoulders with the locals as they go about their marketing. 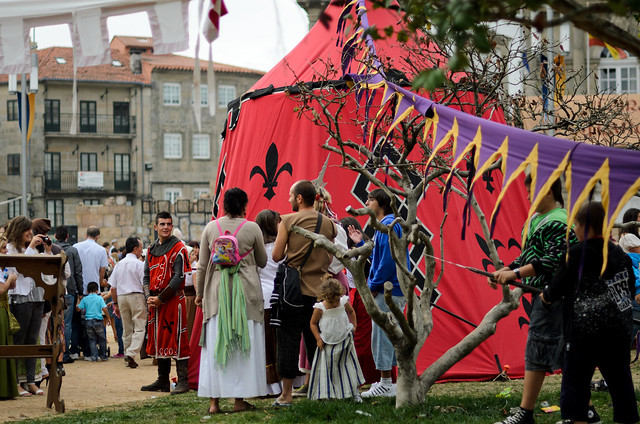 Finally, to witness the city decked out to the nines, book well ahead to be here the week beginning the second Saturday in August, when the Festa da Peregrina is held in honour of the Pilgrim Madonna with outdoor concerts, a fairground, and street parades. Or the first weekend of September, when since 1989 many locals have donned 15th-century garb for the Feira Franca (above), a festival that pulls in around 100,000 visitors each year with its displays of medieval pageantry, music, art, jousting, and more. Forsooth!

Stacey Wittig is a travel journalist and author of several books on the Way of St. James, including Spiritual and Walking Guide: León to Santiago. Find her online at UnstoppableStaceyTravel.com.