With awards season winding toward culmination in this coming Sunday’s Oscars (which will include two high-profile Spanish nominations; see below), in late January the Academy of the Cinema Arts and Sciences of Spain held its 34th  Premios Goya gala awards (named after one of the country’s most famous artists, depicted in the prize statue) in Málaga – continuing a nascent trend toward spreading the love to other Spanish cities besides the traditional awards site Madrid (last year they were held in Seville). Watched on television by some 3.6 million viewers and allegdly “carbon-neutral” (how trendy), these Goyas honoured the best of 2019 in Spanish cinema, which has been marked by masterpieces for much of the late 20th century but especially in recent decades evolved into one of Europe’s – and the world’s – most dynamic and distinguished.

So once again: the sobres, please!

The three-hour show was emceed as last year by Catalan actress/comedian Silvia Abril and her talk-show-host husband Andreu Buenafuente, who kicked things off with a bemusing stage number in which they went through a series of goofy costume changes, popping up like whack-a-moles from behind a low curtain; as Spain’s prime minister Pedro Sánchez looked on in the audience, did a bit on the country’s political travails of the past year – including digs at the right wing – using titles of movies by the country’s most distinguished director – and biggest winner tonight – Pedro Almodóvar (sitting garbed in black, scarf and all, flanked by his stars Antonio Banderas and Penelope Cruz); Silvia doing a bit as invisible actress superhero; and finally the literally cheekiest stage exit I’ve ever seen onscreen (which would never fly in the USA or Britain!). It was all punctuated by a pair of soulful musical performances and rounded out with a high-kicking chorus line (below) with Banderas at its centre. 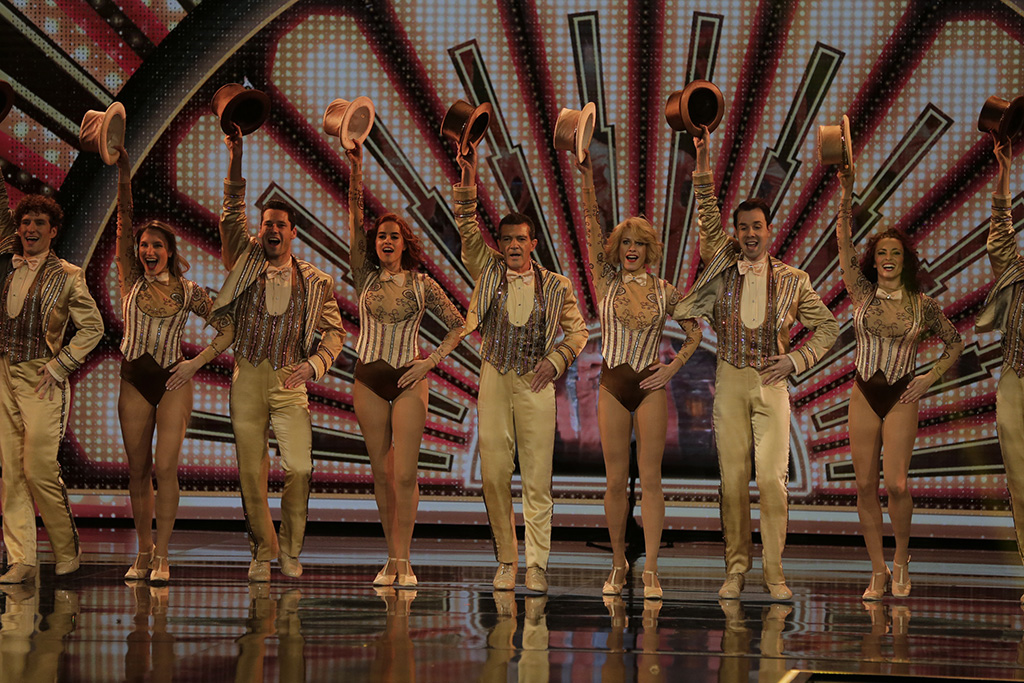 There were 29 diverse categories – wardrobe, cinematography, soundtrack, special effects, and so on – so obviously I can’t list them all, nor give the blow-by-blow, but the five top honours of the night were:

At age 70, Almodóvar (top) is the grand old man of Spanish cinema, as well as probably the country’s best known director ever. Starting in the 1980s as the premier avatar of post-Franco Spain’s cultural blossoming in the 1980s, the 20-year-, 21-movie oeuvre of this prolific man of La Mancha has ranged from the wild, wacky comedies of his youth (Women on the Verge of a Nervous Breakdown was a game-changer for me personally) to searing dramas and even pyschological horror, with women usually front and centre as his muses, as well as boundary-pushing themes like homosexuality (Almodóvar himself is gay), transsexuality, incest, sacriligiousness, and more.

The director had already won nine Goyas in past years, and tonight his latest scooped up a number of the top awards – in addition to the three above, Best Actor (see below), Best Original Music, Best Supporting Actress, and Best Film Editing. Powerful and with plenty of autobiographical elements, the film centres on the creative crisis of an aging gay director in decline and addicted to heroin (Banderas), unfolding episodically with present-day scenes as well as flashbacks including his childhood in a Valencian village (with Cruz  playing his mother back then) and his life in go-go 1980s Madrid. And will this movie also win the Academy Award for Best Foreign Film this Sunday? Odds are good!


A 36-year-old born in Seville and raised in Fuengirola, near Málaga on the Costa del Sol, she’s been primarily known as a stage actress but she’s also done plenty of television films, including 17 movies (in 12 of which she had a leading role). This was her third Goya nomination and first win, for playing in La Trinchera Infinita (The Infinite Trench, see below) the wife of a man who goes into hiding during the Spanish Civil War of the late 1930s. 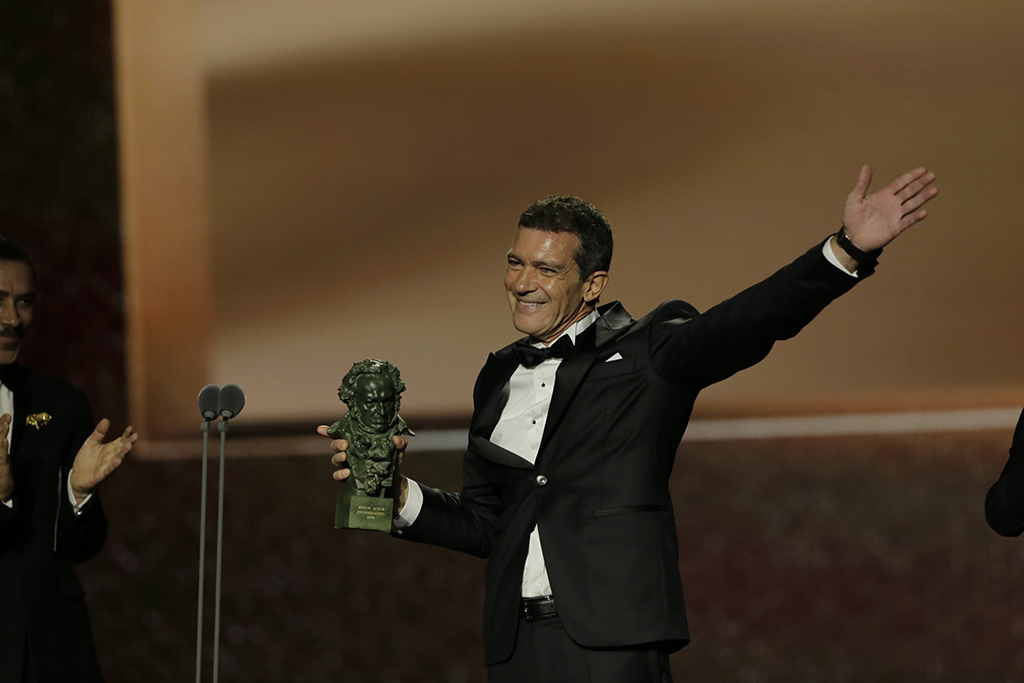 
This 59-year-old actor for many needs no introduction. Born here in Málaga as José Antonio Domínguez Bandera, he delivers a powerful performance as  Salvador Mallo, Pain and Glory‘s fictionalised version of Almodóvar. Quite fitting in a sense, because it’s due to this director that Banderas is an international star in the first place, thanks to appearances in various of his films such as Women on the Verge of a Nervous, Labyrinth of Passion, Law of Desire, Matador, and Tie Me Up! Tie Me Down! He went on to make it big in Hollywood in films such as Evita, Interview With the Vampire, Philadelphia, the Shrek movies, and Zorro, and in 38 years has amassed a body of a hundred films. Also nominated for this same category and film in the upcoming Academy Awards, he’s also in the current fantasy film Dolittle, and three flicks coming out later this year: The New Mutants, The Hitman’s Wife’s Bodyguard, and Lamborghini – The Legend.

It’s also well worth taking a look at the four other outstanding Best Picture nominees:

Intemperie (Out in the Open)

Based on a 2013 first-time novel, directed by 55-year-old Sevillan Benito Zembrano, and set amidst the parched, pitiless badlands of 1946 Andalusia, it’s the moving and visually stunning (if unsubtle) story of a 12-year-old boy who escapes from a plantation and is hunted by its tyrannical overseer. A grizzled nomadic shepherd takes the lad under his wing, and they both face the sadistic baddy’s harrowing cat and mouse pursuit. Nominated for four other categories besides Best Picture, it won for two: Best Original Song (though in my obviously subjective opinion, this plaintive tune’s a bit of an acquired taste) and Best Screenplay Adaptation.

More than 80 years after the end of the Spanish Civil War, this traumatic three-year conflict which scarred and held back Spain for generations continues to hold fascination for today’s filmmakers. Yet another take on it, inspired by the real-life story of the mayor of the Málaga town of Mijas, comes from co-directors Aitor Arregi and Jon Garaño (nominated for Best Director and winning for Best Original Screenplay in 2018 for the film Handia) along with José Mari Goenaga. Filmed in Andalusia and the Basque Country, this tale is of a Republican Loyalist who in 1936 is marked for death by the fascist side after seeing his comrades being shot. He becomes a topo (mole), going into hiding in a bolthole under his house – and in fear of retribution from the victorious Nationalists staying hidden with the help of his wife (played by Belén Cuesta, who won this years Best Actress award for this role), for a staggering 33 years, until being pardoned by the Franco régime. It’s a complex, riveting tale of secrets and lies, as well as enduring love. Of its 15 nominations, in addition to Belén Cuesta’s win it also nabbed Best Sound.

Set in the countryside of Galicia‘s Lugo province and filmed in Galego (the regional language of Galicia, similar to Portuguese), this is the story of an arsonist who’s released from jail after serving time for starting a fire. He lives a quiet life back on his mother’s farm with her dog and three cows, until a suspicious new fire roars through the area. It’s the second feature by Franco-Spanish director  Oliver Laxe, who favours non-professional actors on their home turf – getting from them such high-quality performances that Benedicta Sánchez, a local cast as the firebug’s mum, won a Goya for Best New Actress (one of the films four nominations and two wins, the other for Best Photography Direction) – at the tender age of 84! With white locks flowing, Sánchez delivered her acceptance speech in both Spanish and Galego, commenting that “life gives you surprises, and this is a big one in my long existence”, and dedicating her win to “a meiga terra (my land)”.  It was definitely one of the endearing highlights of the evening.

Mientras Dure la Guerra (For As Long as the War Lasts)

Once again it’s back to 1936 and the Spanish Civil War, this time with the focus on one of Spain’s all time greatest writers and philosophers, Miguel de Unamuno, who during the last six months of his life decides to come out publicly in support of the rebellion against the Second Republic by the forces of General Francisco Franco, reasoning it would bring order to the country’s chaotic situation. He’s thus immediately fired as rector of the University of Salamanca, but then before long become disillusioned by the brutal excesses of the Nationalists. When newly named “head of state” Franco transfers his operations to Salamanca, Unamuno visits his headquarters to ask for clemency for some imprisoned friends. (By the way, his falling out with the Francoists was complete when he risked being lynched in a public row with another general, known for his fanatic slogan “Long live death!” He was placed under house arrest and died that December.)

This is nine-time Goya winner Alejandro Amenábar‘s (The Others, Regression) Spanish-language film since 2004’s Mar Adentro (The Sea Inside), and this year it got 17 nominations and five awards, including Best Artistic Direction, Best Supporting Actor, Best Production Direction, Best Hair and Makeup, and Best Wardrobe Design.

Well, it was an abundance of virtuoso talent on display that night for sure – let’s see what 2021 brings us!