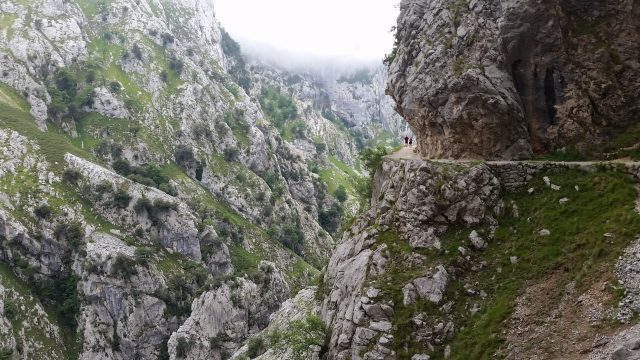 In northern Spain, the Picos de Europa range straddling the autonomous communities of Asturias, Cantabria, and Castile-León delivers some of this country’s most majestic mountain scenery with peaks reaching up to 2,650 metres (8,690 feet). One superb example is the aptly named Garganta Divina (Divine Gorge) – gaze into the depths and you’re pretty much overwhelmed by its dizzying heights and dramatic natural splendour. And this narrow limestone gorge in Picos de Europa National Park running from southeastern Asturias into the northernmost tip of Castile-León is accessible only via a 12-kilometre (7½-mile) trail called the Ruta del Cares or Senda del Cares.  A series of tunnels and ledges carved into vertical walls, the Cares Trail is, yes, a bit remote but oh so worth the journey. 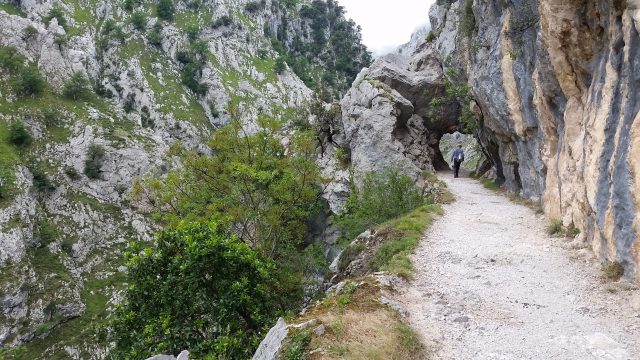 As you emerge from any of the many tunnels (said to be 71, but we lost count), the trail looks as if it drops off in front of you. Still, you can’t help but tilt your head upwards straining to see the jagged peaks of the Picos far above. Only the brave – or foolhardy – can see the Cares River flowing through the chasm below. The impressive vertical views – both overhead and below – triggers exhilaration and a sense of breathlessness. Yet the gravel trail is wide and level, so the only chances of falling are from tripping in inappropriate footwear or not paying attention whilst taking selfies. 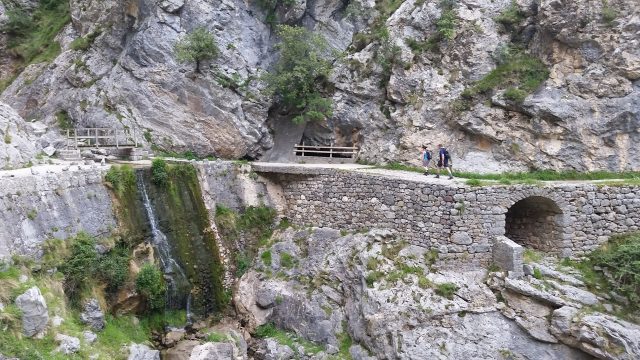 The elevated track was blasted out of the sheer cliffs with dynamite and handpicked for part of a canal system between 1916 and 1921 to resupply the Camarmeña-Poncebos hydroelectric power plant several kilometres away, then expanded in the late 1940s.  Along the way you still see portions of the active canal, which diverts water from the small dam in Caín de Valdeón to feed the power plant. That construction project was an engineering marvel of its time, and 11 workers lost their lives building the canal, which sometimes parallels the track and then disappears into tunnels carved out of the limestone walls. 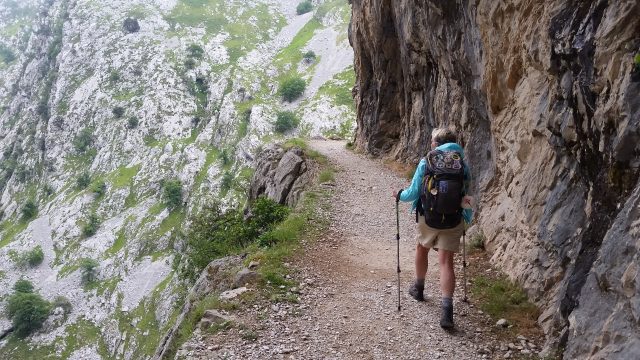 Most people start the trail at the Asturian hamlet Poncebos and end up in Caín de Valdeón in León province. We followed the river, and after a short walk, began our ascent. The climb is steep and on loose rock, but fortunately this is actually the most challenging part of the hike and lasts for only 2km (1¼ mi.).  The remainder of the trek is rated easy for experienced hikers, as from here the trail is relatively level. 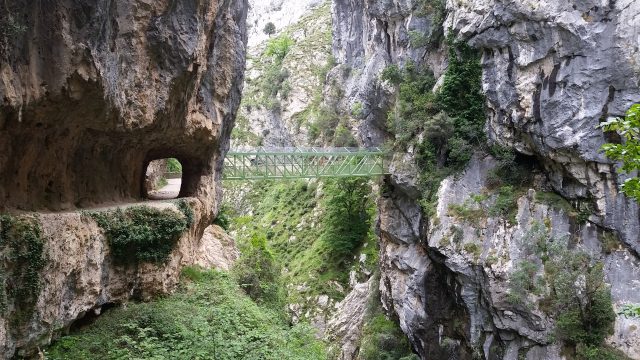 Plan for three to four hours each way; seasoned hikers can complete the out and back trek in one day. But those with a slower pace could choose to make it a two-day expedition by spending the night at one of the termini of the trail and then returning to their start point the following day. The charming mountain hostels that bookend the trail make the overnight venture tempting even for the experienced. Caín de Valdeón (below), with a population of fewer than 100 hearty mountain folk, offers a handful of places to stay including some with thick stone walls, pitched roofs and wood-beamed ceilings typical of Spanish mountain towns. A few seasonal restaurants serve the small community, which also has a market and stone church. Poncebos is even tinier – more a crossroads than an actual  settlement — with three chalet-like hostels which have inviting bar/restaurants.

A third option is to hire shuttle services in yet another hamlet, Arenas de Cabrales, to pick you up at your lodging and drop you at the Poncebos trailhead. Later they gather you at the end of your hike in Cain. A 4×4 excursion is included for the scenic mountain drive back to Arenas.

Avoid Easter week, August, and summer weekends, when the trail is crowded with Spaniards on holiday.

Watch where you place your feet because, in some spots, the cliffs drop from the trail’s edge hundreds of metres straight down. Bring plenty of water and snacks – but not your bike; they’re not allowed. The Cares Trail is not accessible in winter and is not recommended for young children.

Stacey Wittig is a travel journalist and author of several books on the Way of St. James, including Spiritual and Walking Guide: León to Santiago. Find her online at UnstoppableStaceyTravel.com.