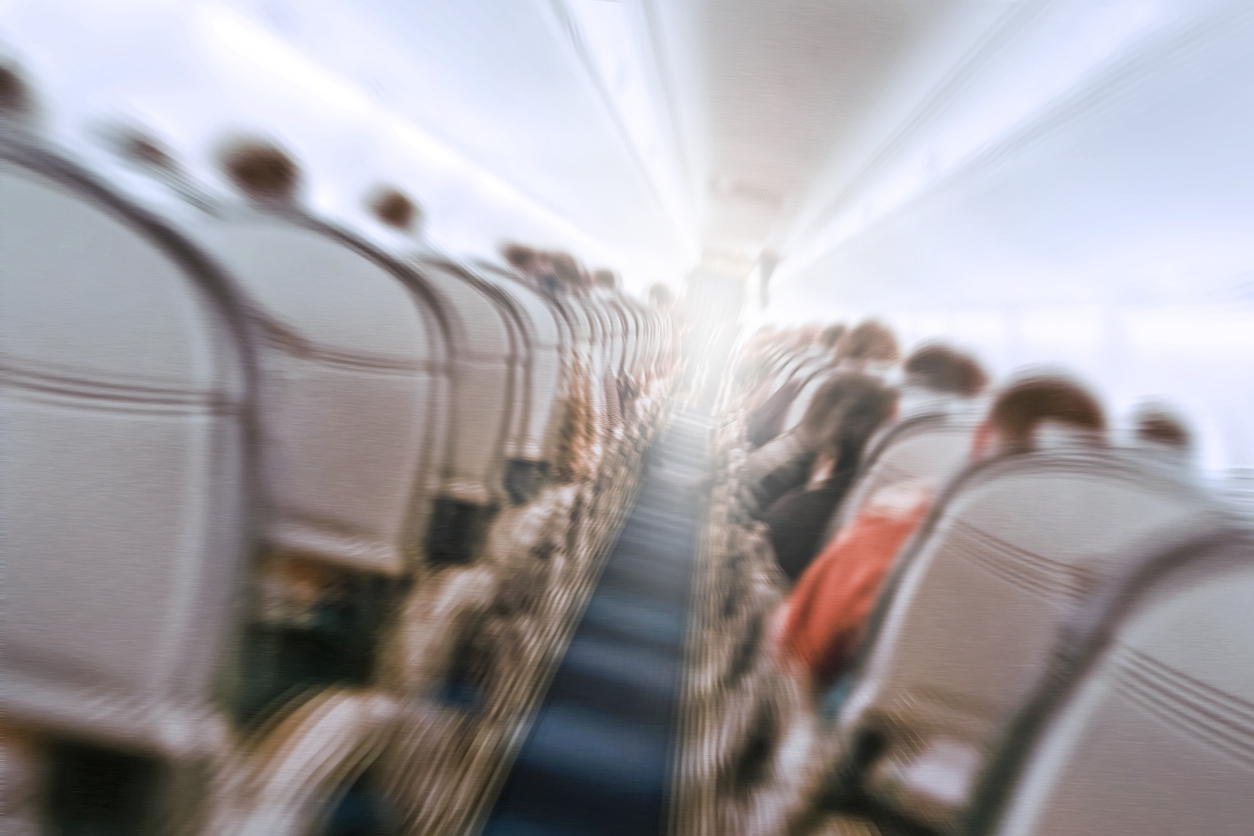 When I’ve flown with anxious fliers, I found many to be extraordinarily sensitive to turbulence. For example, when one said, “What’s that turbulence?” I replied, “What turbulence?” Even when he said, “There, that!” to point out the moment when he felt something, I still didn’t notice anything at all.

If the amygdala gets used to an experience, and regards the experience as routine, it stops reacting. How can we desensitise the amygdala to the feeling of dropping? Go to some stairs with another person. Together, step up onto the first step. Turn around to face the floor. Put your arm around the other person’s waist. Have them put an arm around your waist. Then, standing side-by-side and embraced, count one, two, three, and jump to the floor. It is only 7 inches away. It takes approximately a tenth of a second to reach the floor. But during the tenth of a second, the two of you experience zero G. Normally, as when falling from a stepladder, the amygdala would react. But this is different. You are experiencing zero G physically embracing another person. This physically and psychologically shared experience changes how the amygdala responds; it comes to regard free-fall – at least temporarily – as fun.

Since the benefit may be temporary, do this the day before your flight. In addition, naturally, there’s an app for that. The free SOAR app includes a G-force meter, and Android users can download a G-force meter here. By monitoring the readings on the G-force meter, you avoid exaggeration in which the lightheadedness (at perhaps 0.8 G) is mistaken for zero G free-fall.

How much does an airline actually move in turbulence? A bump in turbulence feels a lot like a speed bump in your car. A five-inch (13-centimetre) speed bump produces a solid jolt at five miles per hour. A one-inch (2.5-centimetre) bump would produce a similar jolt at 50 mph (80 kph). A half-inch bump would do the same at 100 mph, or a quarter-inch at 200 MPH. At cruise speed of 550 mph, the bump would need to be between an eighth and a sixteenth of an inch. Though it feels like the plane moves hundreds of feet in turbulence, the actual movement is a fraction of an inch.

It isn’t possible to slow down enough to produce a significantly smoother ride. Since pilots can’t give you relief from turbulence by slowing down, you need to be convinced how little the plane moves in turbulence.

Here’s how you can prove it to yourself. Hold a cup half filled with water high over a bathtub. As quickly as you can, plunge the cup downward toward the tub (you do not need to hit bottom). Note how some of the water sloshes over the side of the cup. During flight, hold a cup half full of liquid against the edge of the tray table. If the plane goes up or down, so does the tray table, so it serves as a measure. If the plane were to plunge even one foot, you would see the water rise up above the cup. Note how, during even the most intense turbulence, the liquid, while it may wave, stays in the cup. Surprisingly, you will find that drinking from the cup, in turbulence, is less difficult than doing so while riding in a car. Here’s an email from a client of mine who tried this out:

I have gained so much through this course, and my flights have been more manageable. I found the 5-4-3-2-1 exercise most helpful, and I bring an interior decorating magazine on the plane because the pictures have lots of different items to describe when doing the exercise. Unfortunately, my biggest fear is turbulence. I remember you telling me that the plane was typically only moving a fraction of an inch. I remember stopping you and repeatedly asking: “What do you mean it’s only moving a fraction of an inch” I though you MUST have meant relative to how high we were in the sky. But no, you really meant that the plane wasn’t moving that much. For me, it feels like a cork in the ocean, wildly bobbing up and down. On my last flight, we hit turbulence, not bad enough for the flight attendants to be seated, but bad enough that the seat belt sign came on. I asked the flight attendant if we were OK, and then I sort of fell apart. I became a total borderline, unglued, tearful passenger. She was wonderful. But I was mortified. Unlike a true borderline, I didn’t want attention; I wanted to blend in and be “normal.”

On the next flight, I got a clear plastic cup, half-full of water. I told myself that I would NOT allow myself to freak out if the water didn’t come out of the cup. I simply REFUSED to allow myself to freak out over a plane that was only less than an inch. I was taking charge! Anyway, it got turbulent; flight attendants seated kind of turbulence. And the water never came out of my cup. I started at my cup and I counted . . . one-one-thousand, two-one-thousand, three-one-thousand. I figured most turbulence doesn’t last more than five minutes, sos I stared at my cup and counted to sixty-one-thousand five times and if I needed to start over, I did.

I honestly feel like a switch was flipped; like some faulty neurological pathway that associated turbulence with immediate panic was reset. I flew from Houston to Cancun and back from Cancun to Chicago to Cedar Rapids and ALL of the flights were turbulent and I didn’t panic. I was OK. No pounding chest. No tears. No “I’m going to die right now” feeling.