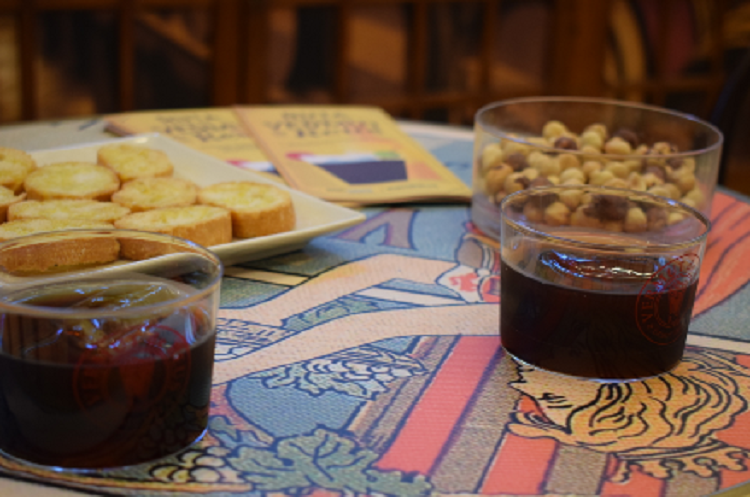 Think of a quintessential Spanish alcoholic drink and you might well conjure up images of sangria, the fruit-and-wine combo that defines many a tourist’s Iberian summer. More frequent visitors to these shores will probably picture the similar but more authentic Rioja tinto de verano (summer red wine) – or perhaps a glass of cava (sparkling wine), sherry, Asturian cider, or ice-cold cerveza.

But what many discover is that Spaniards of all ages have traditionally harboured a passion for the sweet, fortified, spices-and-botanicals-infused wine that first became popular in 18th-century Italy and might be more familiar to many as a key ingredient in cocktails like Martinis and Manhattans. I speak of course of vermouth – here known as vermut or vermú – Spain‘s favourite apéritif, drunk neat or on the rocks and widely available not only in bottles but also de grifo (on tap, below). 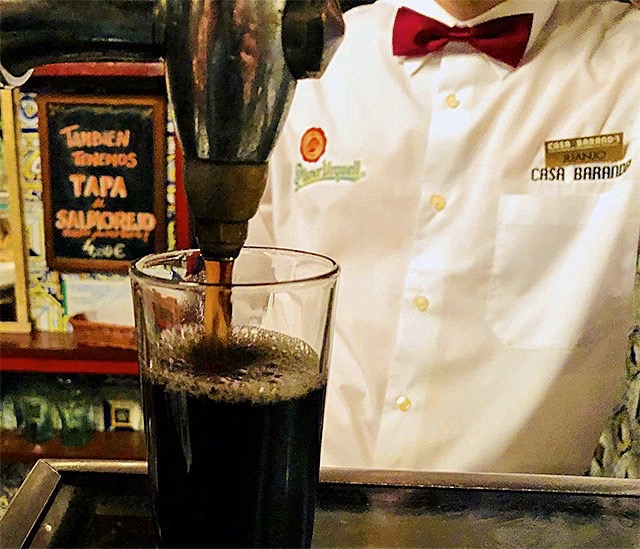 Vermouth starts out as a white wine but is coloured and flavoured by the addition of various ingredients such as bay leaves, cardamom, cinammon, chamomile, citrus peel, cloves, coriander, ginger, hyssop, juniper, marjoram, quinine, rosemary, and sugar, ending up with an alcohol content of 15 to 18 percent. It’s made at present by some 20 Spanish wine producers.

My first acquaintance on Spanish soil with this beverage – which both took pride of place in my grandparents’ home bar (in the form of a Martini bottle) and which was the only booze legally allowed to be consumed (provided you had a doctor’s note!) in the Prohibition-era USA because of its purported medicinal properties – came in the unlikely setting of a Gran Canaria town. Heading to Vega de San Mateo‘s celebrated weekend farmers’ market, my wife and I were surprised to see merry pensioners dancing the tango in the main square. After some quick enquiries, we were able to establish their passion fuellers: vermut served in a shallow glass with ice, slice of orange, and pitted green olive. 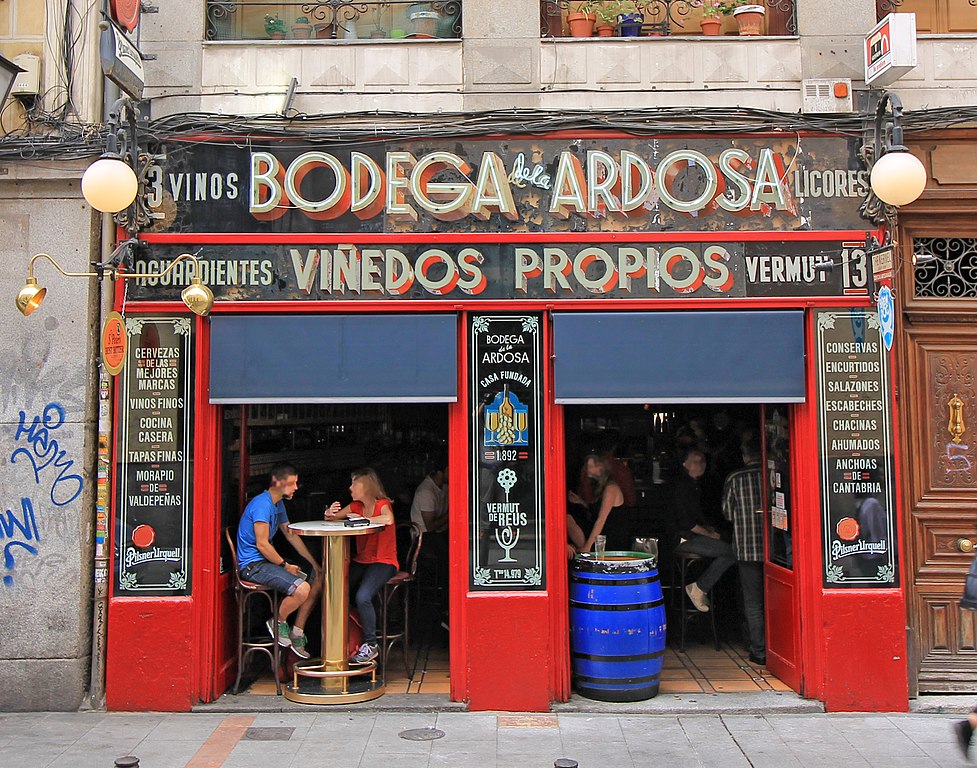 I’ve since enjoyed vermouth with the traditional accompaniment of crisps (whose salty, sharp flavour is the perfect partner for the drink’s slightly bitter herbal edge) in Madrid’s historic centre-city vermouth taverns such as the 102-year-old Taberna Ángel Sierra in Chueca and the similarly venerable Bodega de la Ardosa (two photos above) in Malasaña, as well as in Seville‘s oldest bar El Rinconcillo (est. 1670) and Cal Pep in Barcelona‘s Gràcia neighbourhood. Plus of course closer to home, for example in a pre-lunch appetite-builder of a sitdown in the colonial square of Canary Island La Palma’s charming town San Andrés y Sauces – where I first noticed that I was no longer the youngest drinker in town of this aromatic, fortified wine.

I’m of the opinion that this new development is probably down to one of two factors: A. I’m simply getting older, or B. vermouth has become the new gin tonic. I think the second option’s more likely and not just because I’m vain. That’s because as in the same way a younger Spanish generation reinvented the staid British tradition of a G&T, they’ve sexed up one of Italy’s greatest exports – and now long a traditional product of Spain – and made it a zippy addition to today’s drinking culture.

And though vermouth may be fashionable again, its history in Spain goes back well over a century. Just a few weeks ago I found myself in the Tarragona-province town of Cambrils, and was chuffed to learn that a mere 15-minute drive separated me from this province’s foodie capital and Reus (pop. 100,000), the indisputable Iberian epicentre of vermouth culture, where the stuff was introduced by Italians in the 19th century. Here there’s a temporada de vermut – as in vermouth (happy) hour(s) from midday to 3:00pm (though it tastes just as good prior to dinner as pre-lunch), as well as a “Vermouth Trail” which links the key institutions dedicated to the grand drink.

I started my pilgrimage at the Estació Enológica, aka La Casa del Vi i del Vermut  (below), a modernist building dating back to 1910 that’s a temple to Reus vermouth brands past and present. It’s here that the local tourist board’s Dominique Ruiz Pierrard informed told me or this city’s long history in spirits; in the 18th century, the refrain went, “Reus, Paris, London” set the price of brandy. By the turn of the 20th, the focus had shifted to vermouth, with 30 local producers manufacturing their varying secret formulas. One of the survivors is the acclaimed Vermuts Rofes on Carrer Sant Vicenç. 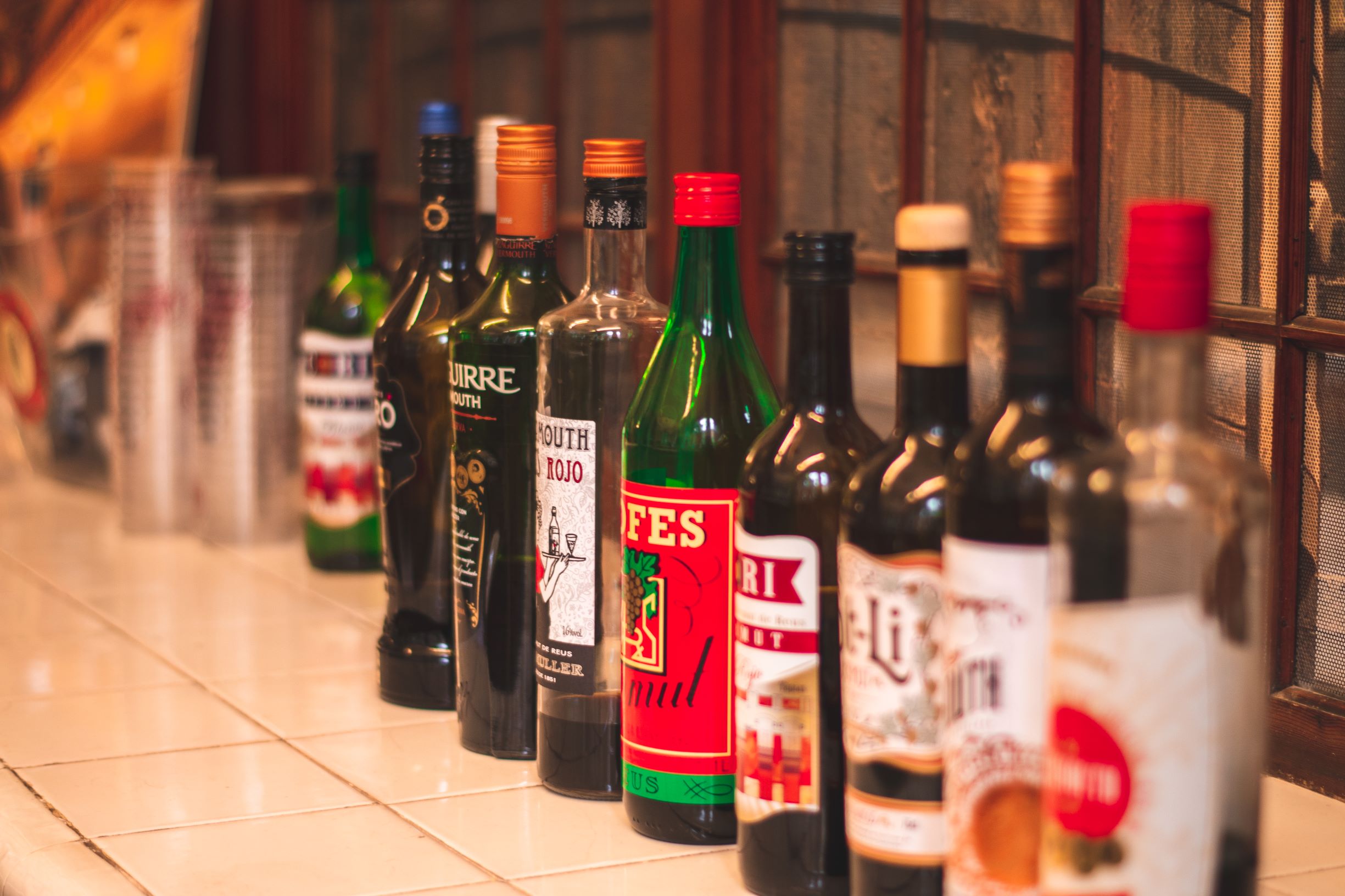 Here I resisted the temptation to taste from a menu at their restaurant, which starts with their very own patatas bravas (chips with spicy red sauce) and concludes with a forest-fruits sorbet. Instead, I head out to a function room popular with celebrations such as christenings and weddings and as I listened to a history lesson from the current generation of family ownership, bespectacled Salvador Rofes, I tried to imagine it as the former cellars, which were connected by vintage truck to the nearby train station.

Thus properly fortified and edified, I next headed to the Museu del Vermut (below), the largest of its kind anywhere in the world (as well as being home to a restaurant of creative Mediterranean cuisine). Initially established in 1982 as a private collection after owner Joan Tàpias stumbled across an old bottle of the classic Italian brand Cinzano. Here I spend a good hour and a half or so drinking in the colourful memorabilia including over 300 classic promotional posters, 1,300 bottles, 3,000 labels, and a bar stocking vermouths from all around the globe, including the U.S. and the U.K. 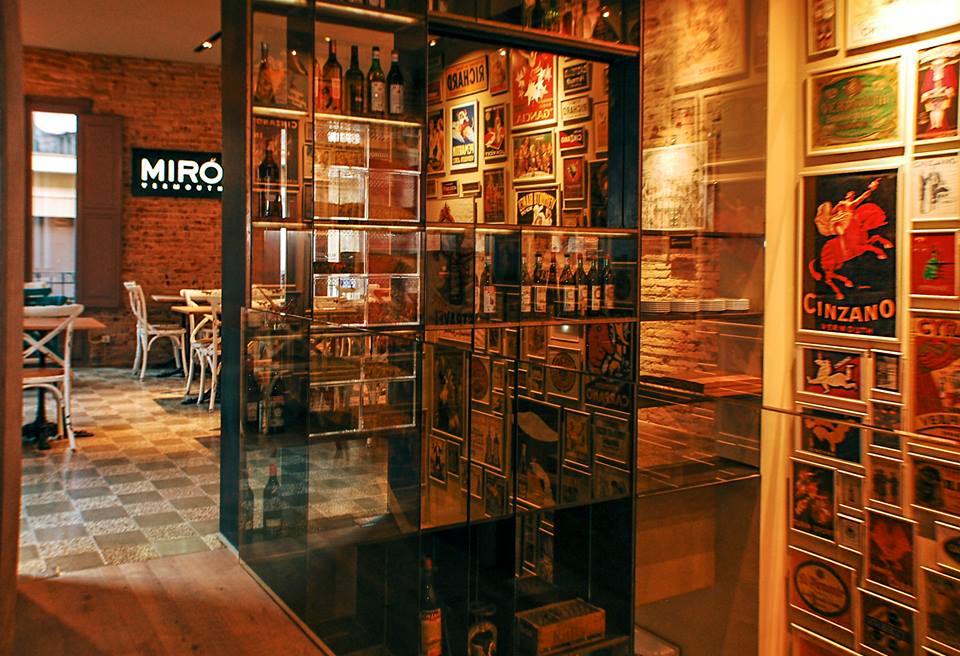 
I finish off where I started with a return to the Estació Enológica, where I wash down Reus-grown hazelnuts and bread drenched in the liquid gold of rich Siurana olive oil with a range of different vermouths, tasting very different to the Italian staple – and  indeed, to each other. And I raise an appreciative glass, first to Reus’ most famous native son, iconic architect Antoni Gaudí (see below), and second to my grandparents. Life is sweet – ¡salud!

Commemorated by a statue of him as a boy, Gaudí left for Barcelona at age 16, but you can find out more about the life and times of the great man at the Gaudí Centre Reus in the main square, Plaça Mercadal. I was fascinated by the photos of natural phenomena of this region, which Gaudí drew upon in his architecture, with the buildings contrasted alongside their original natural inspirations. Nearby, the gloriously ornate Casa Navás, finished in 1908 and designed by Gaudí contemporary Lluís Doménech i Montaner, is the epitome of the Catalan Modernisme style which defines this city’s historic centre.

Matthew Hirtes is the only broadsheet journalist living on Gran Canaria. He’s covered the Canary Islands and beyond for the likes of Spain Buddy and the Telegraph travel section. His Going Local in Gran Canaria is as much relocation manual as travel guide.