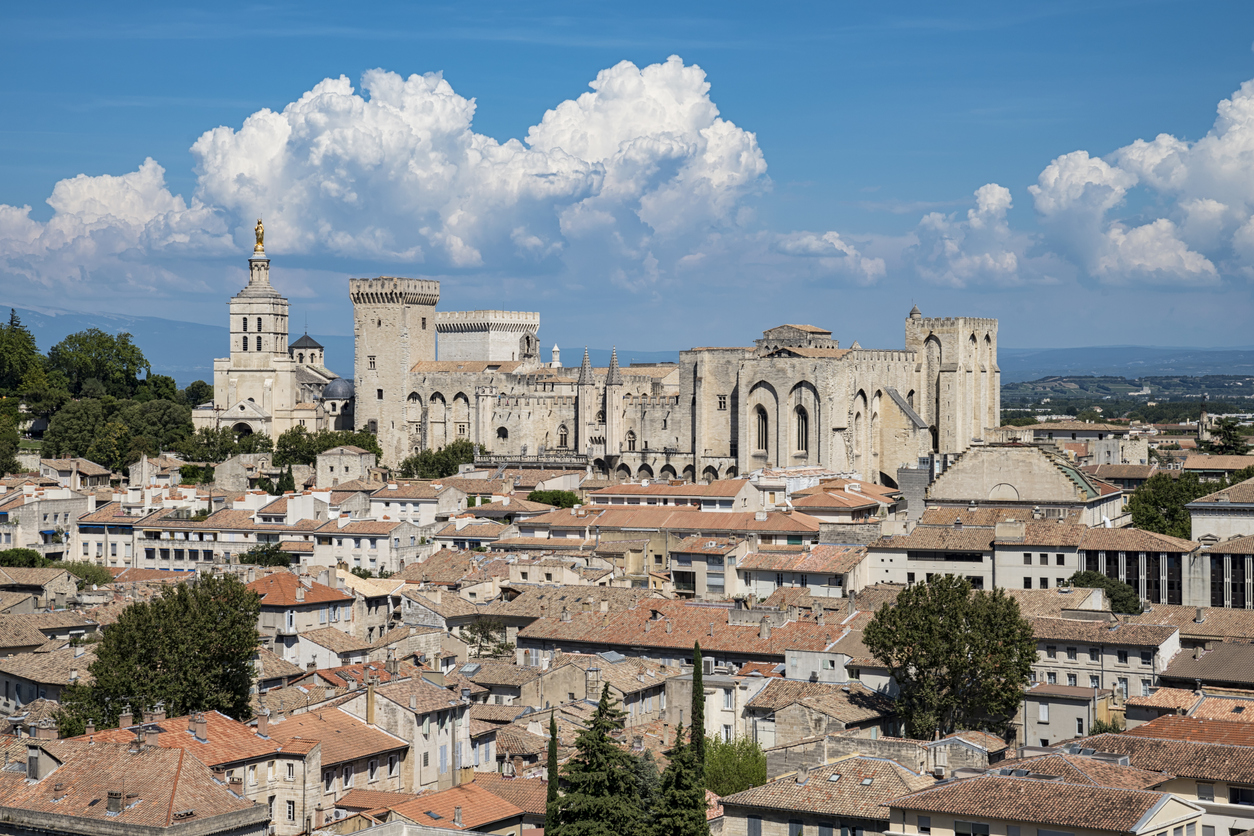 On a recent drive across the south of France – partly driving, partly by train – we passed through an impressive triangle of historic cities of Provence including Arles, Nîmes, and Avignon. And it was this last – the largest of the three, with a population of more than 90,000 – which most captured our imaginations with its vibrancy and lovely medieval core – including a testament to one of the most singular chapters of medieval history.

Located on the left bank of the Rhône River, a bit over two hours’ drive south of Lyon and a little over an hour northwest of Marseille (and significantly less by train in both cases), Avignon today is a city with a strong industrial and commercial sector, as well as being the capital of the famous Rhône Valley wine country. Founded as Aouenion by Ionian Greeks around 539 BCE, from the 1st century BCE through the 5th century CE it was the Roman city of Avennio. But it was during the Middle Ages, after a tumultuous period of back-and-forth between Goths, Franks, Saracens, and the Holy Roman Empire, that Avignon came into its heyday, becoming a focal point of Europe and indeed the known world almost by chance. 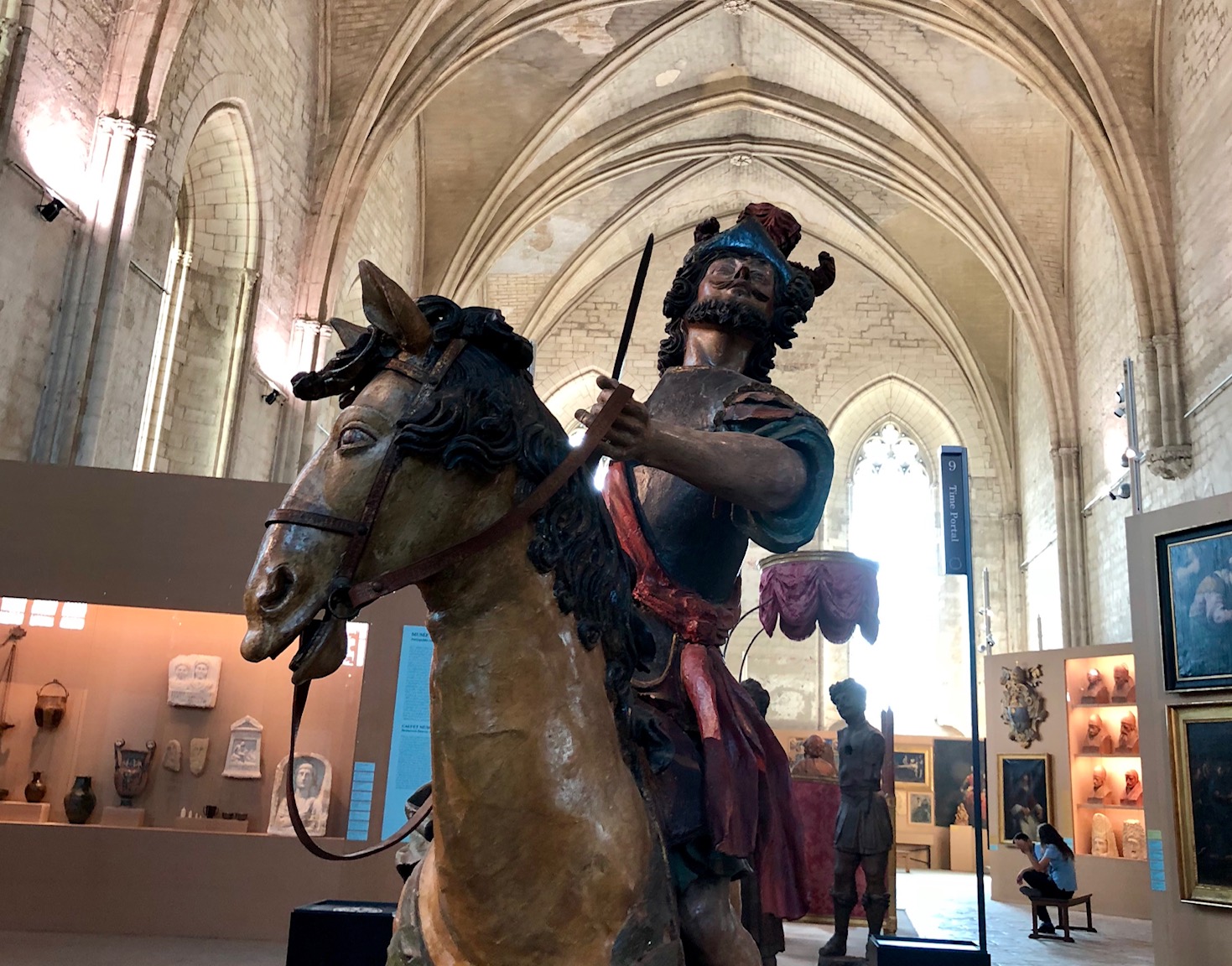 In 1305, the Aquitaine-born archbishop of Bordeaux and later cardinal-bishop of the Roman diocese of Albano Raymond Bertrand de Got was elected Pope Clement V as a result of pressure by the king of France, Phillip IV. Notorious for his abolition of the Knights Templar (who were also destroyed by King Phillip), he also changed the course of European history by moving the papal court from a then chaotic Rome to Avignon, where seven French popes subsequently ruled for 67 years – all under the influence of the French monarchy. This left the city a legacy that is truly fascinating to discover.

The hub of this legacy is the Palais des Papes, an episcopal palace built in the mid-13th century which as a result of the 14th-century Avignon papacy became one of Europe’s largest and most important medieval buildings – and the largest Gothic palace ever built. A massive, sprawling affair of crenellations, towers, courtyards, and arches, it had deteriorated since the end of the Avignon papacy – and in the 19th century was used during the reign of Napoleon Bonaparte as a military barracks, stables, and prison – it became a museum in 1906 and today forms part of the city’s UNESCO World Heritage Site as well as one of France’s most popular attractions. Much of it is merely a shell, housing some fascinating permanent and temporary exhibitions of art and artifacts of the Middle Ages (above), along with a few original details such as chapel frescos and the famous Chambre du Cerf with its medieval hunting scenes. But one modern innovation that truly blew me away are the “Histo-Pads” available to visitors – iPads that when pointed at the palace’s major rooms display a virtual-reality representation of what they would’ve looked like in their original splendour. 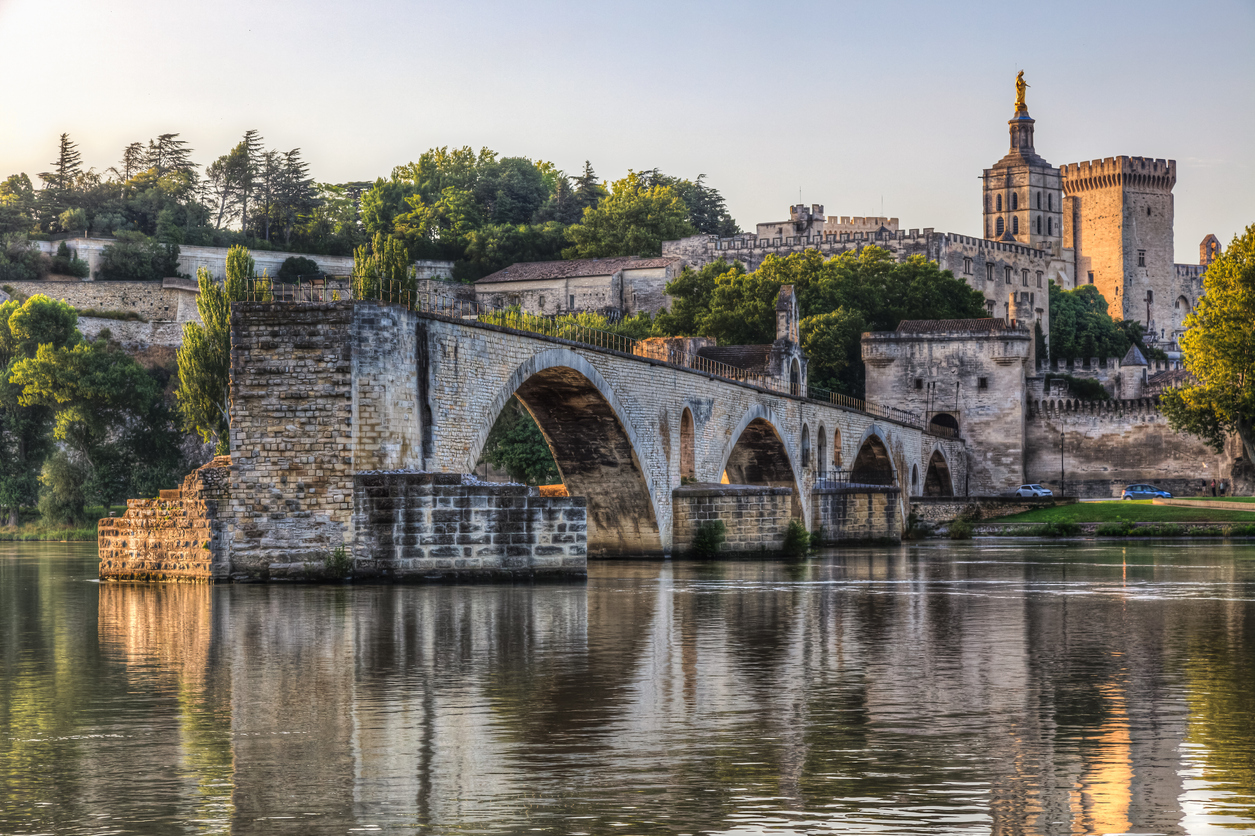 Next door to the Palais des Papes on the Place du Palais, the Cathedral of Notre-Dame des Doms d’Avignon was built largely in the latter half of the 12th century in relatively austere Provençal Romanesque style and crowned by a golden statue of the Virgin Mary; inside you’ll find the tombs of some of the Avignon popes. Just down the hill from both, meanwhile, is another city icon, the Pont St.-Bénézet (above, aka the Pont d’Avignon), a bridge originally built in wood in 1185 and rebuilt in stone a number of times before a flood swept most of it away in the mid-17th century, leaving four spans.  Being an ecclesiastical centre, the old town also sports several other notable churches, like one of the city’s most ornate, St. Pierre Basilica, built between the 14th and 16th centuries, and the Romanesque/Gothic Église et Cloître des Carmes, a Carmelite church with a lovely 14th-century cloister.

With all the history at hand, it’s no surprise that there are a number of good museums in town, as well. The main collection of fine art is the Musée Calvet, housed in an elegant 18th-century manse and including artifacts from prehistory and antiquity as well as paintings and sculpture from the 16th through 20th centuries, porcelain, tapestries, and gold- and silverware. More of the Calvet’s archaeological collection of classical antiquity as well as amazing items from ancient Gaul – at the Musée Lapidaire, housed in a onetime Jesuit chapel. Another small gem, the Musée Angladon, specialises in 19th- and 20th-century artists such as Cézanne, Degas, Manet, Modigliani, Picasso, and Van Gogh (whose Railway Wagons is his only painting on display in Provence). For something in a more contemporary vein, check out the Collection Lambert, with marquis names including Jean-Michel Basquiat, Nan Goldin, Anselm Kiefer, Brice Marden, and Cy Twombly. 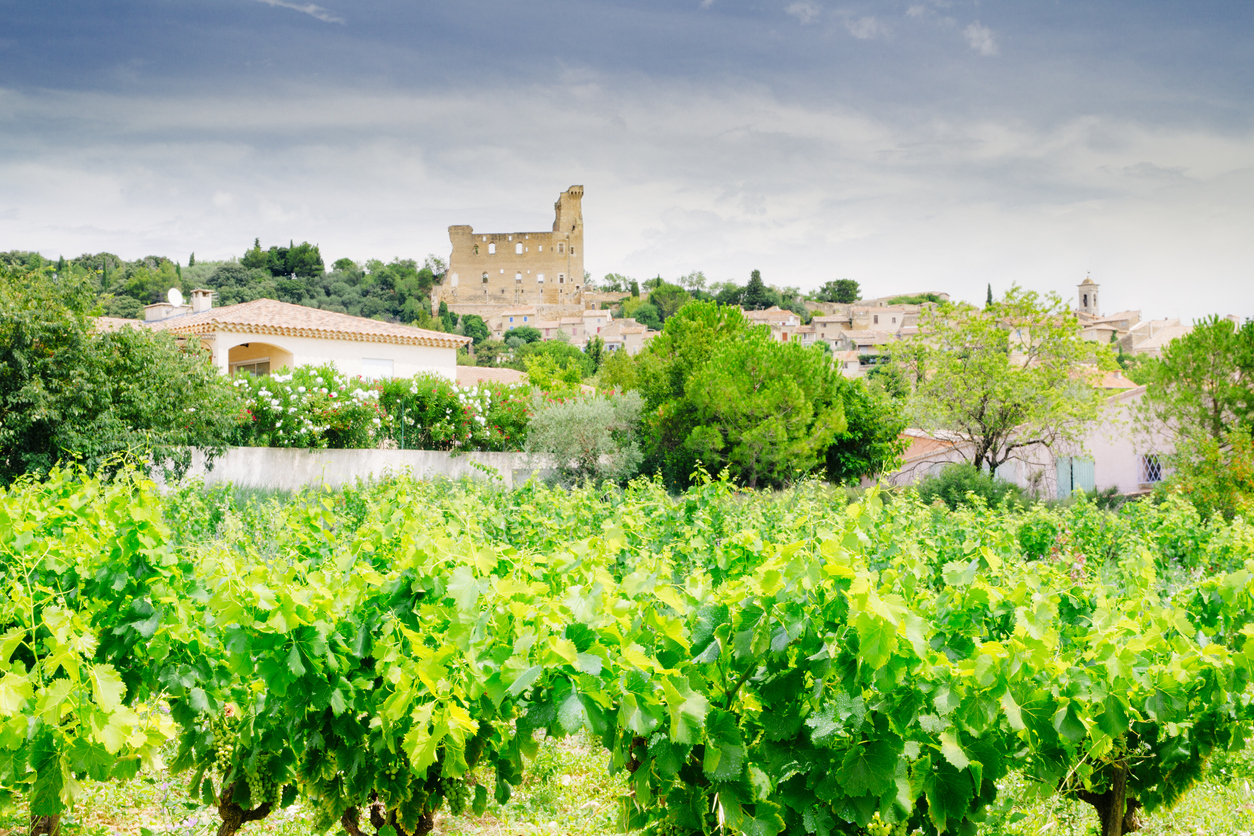 And if you’re a wine lover, the city and region offer myriad delights, starting with
the Carré du Palais on the Place de l’Horloge; the elegant “embassy” of the wines of the Côtes du Rhône has a 10,000-bottle cellar from which it draws for wine tastings, pairings, and classes. There are also plenty of routes for wonderful wine tourism throughout the vineyards of the surrounding countryside – both self-drive and Avignon-based tour operators. One particularly notable destination is the village and surrounding AOC region and terroir of Châteauneuf-du-Pape (above), whose robust reds as the name might indicate developed and were promoted as a result of the patronage of the Avignon papes (popes).

In addition to Arles (just under an hour’s drive and 20 minutes by train) and Nimes (45 minutes by car, 30 via rail), Avignon is also close to Montpelier (just over an hour) – meaning a visit to this area can provide a wealth of sights and experiences guaranteed to keep you happily occupied for a week or more.