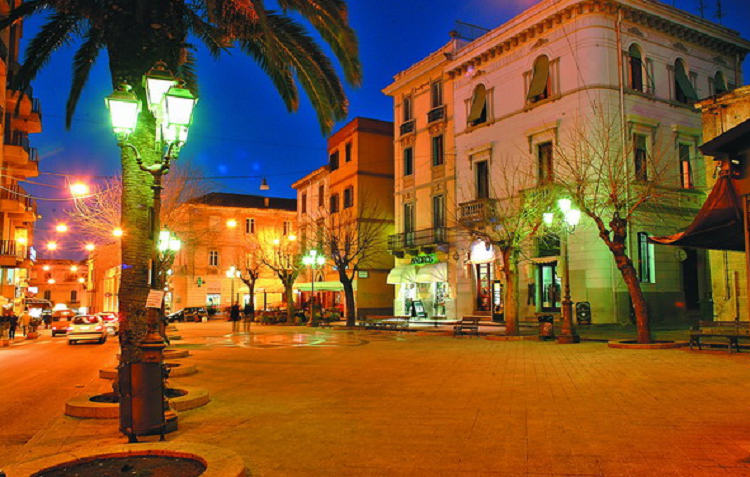 Italy‘s “Emerald Isle”, the Mediterranean’s second largest island after its neighbour Sicily, has become known among holidaymakers internationally for its beaches and the upmarket, jet-settish vibe of areas like its Costa Smeralda, along its northeastern coast, with beaches such as the bay-enclosed white-sand crescent Spiaggia del Principe, so named because it was supposedly discovered by Prince Karim Aga Khan in the late 1950s, and also who also jump started the Costa’s development into one of Europe’s most upscale resort areas. The jumping off point for the coast is the city of Olbia, Sardinia‘s fifth largest (as well as one of this year’s new Iberia destinations) and those who choose to tarry here – whether for its own considerable charms or as a lower-cost base for exploring the Costa Smeralda’s vaunted beaches as little as a half hour away – will be amply rewarded. 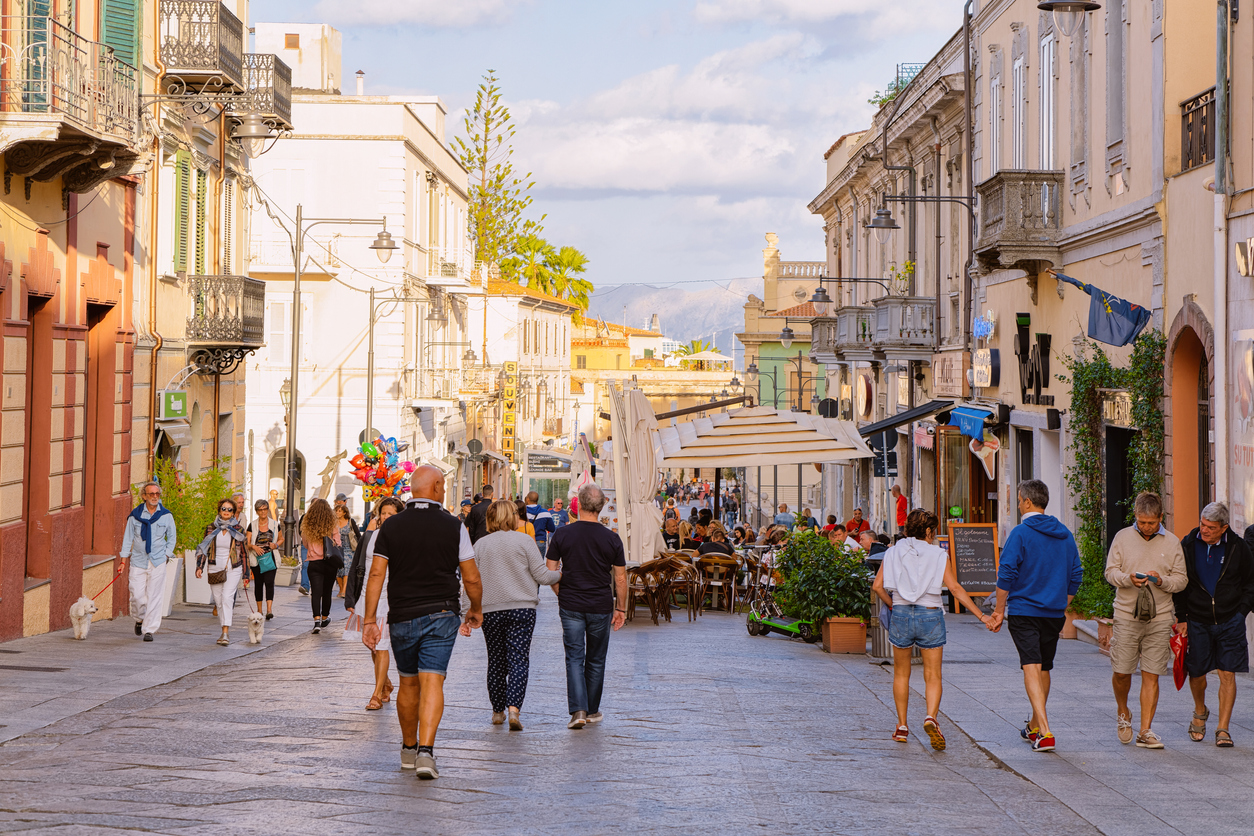 Its origins dating back to the Phoenicians in the 4th or 5th century BCE, Olbia was later colonised by Greeks – who christened it Olbos, meaning happiness – and inevitably the Romans, under whom it became an important port. That and many centuries of subsequent history has left this city of  bit over 60,000 with a legacy that helps makes its centro storico (historic old quarter) in the opinion of many Sardinia’s prettiest – lovely for strolling its streets and squares like Piazza Regina Margherita (top, one of the city’s hubs), Piazza Mercato (the market square), and Piazza Matteotti – and of course enjoying a bite or a drink in its traditional cafés. 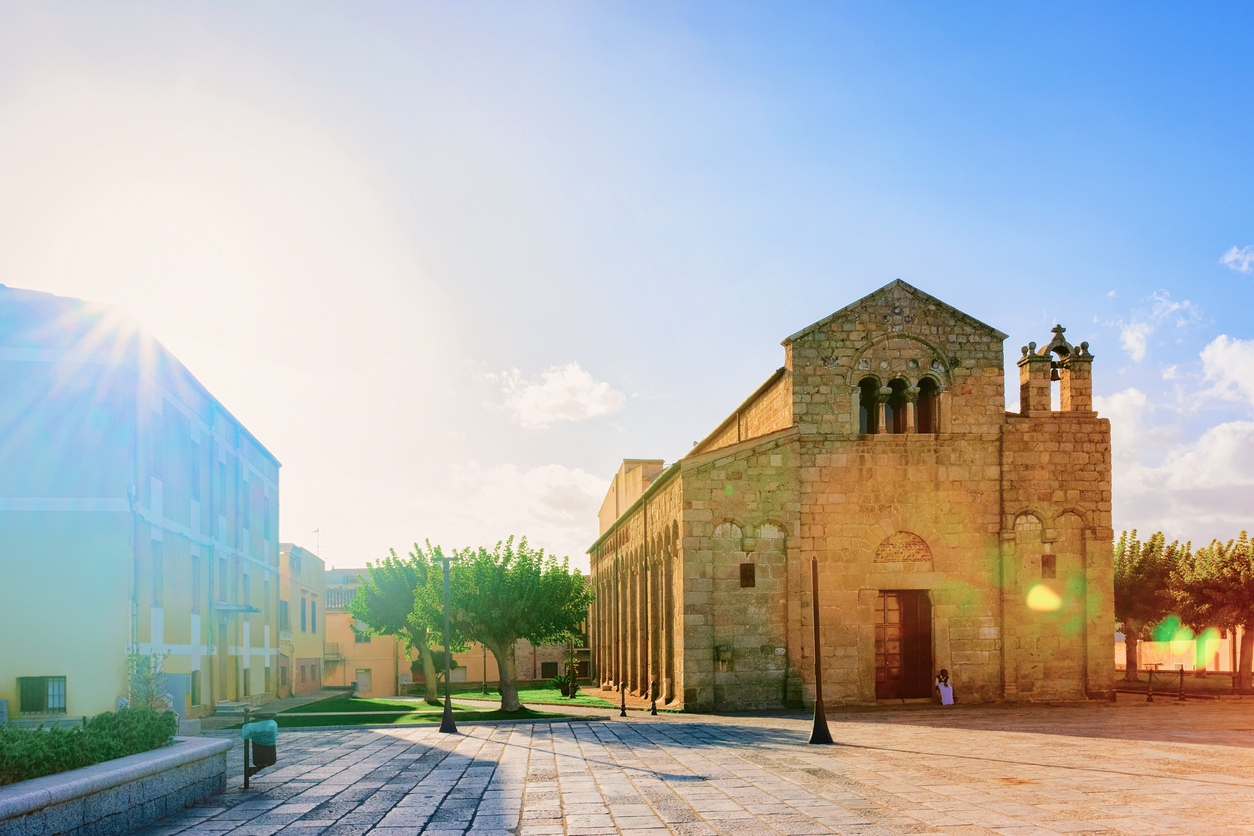 The centro storico‘s main drag is Corso Umberto (second photo above), leading up from the waterfront and lined with shops along with eating/drinking spots. Amid the Baroque and Neoclassical architecture of the centro storico you’ll also spot some Art Nouveau (referred to in Italy as Liberty) from the late 19th and early 20th centuries, such as the Palazzo Colonna and the Palazzo Comunale (city hall).

Other main landmarks include the late-11th-century  Basilica di San Simplicio (above), which echoes its name (actually that of St. Simplicius, a 5th-century pope as well as patron saint of Olbia and Gallura) in its evocative Romanesque simplicity, with some notable frescoes in its apse; under the pavement out front you can also visit excavated Roman graves dating back to the 3rd and 4th centuries. The other main historic church of interest is the Chiesa di San Paolo (below) built in the 17th and 18th centuries, with a Baroque interior and a funky cupola of multihued zigzags.

You’ll also want to check out the ship-shaped Museo Archeologico, on wee Peddone Island, accessed from the port. This modern multimedia affair does a fine job of laying out the history of this Gallura region and other parts of the island dating back to prehistoric times – including a look at Sardinia’s unique, Bronze-Age Nuragic civilisation – the island’s longest lasting, from the 18th century BCE to at least the era of Roman colonisation in the early 3rd century BCE; little is known of this civilisation except for the 7,000-odd, UNESCO World Heritage nuraghe they left behind – small tower/fortresses scattered across the landscape. Another of this museum’s treasures is the remains of Italy’s only medieval shipwreck. 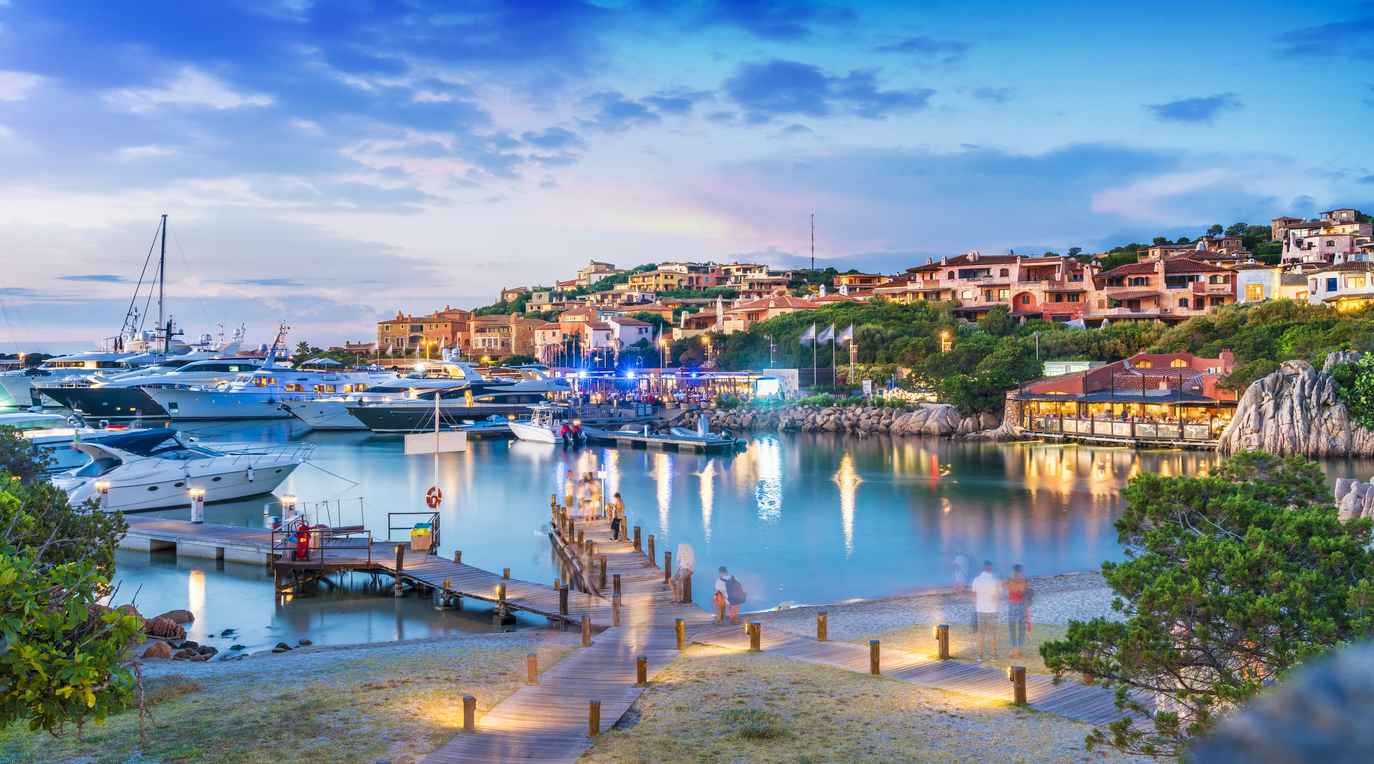 A 40- to 45-minute drive north will bring you to Porto Cervo (above), a picturesque village of pastel-coloured buildings mostly dating from the 1950s and 60s that is the chichi heart of the Costa Smeralda. Its millionaire villas, yachts, resorts, fancy shops and restaurants definitely evoke a vibe along the lines of St. Tropez on the French Riviera as well as Spain‘s Puerto Banús. 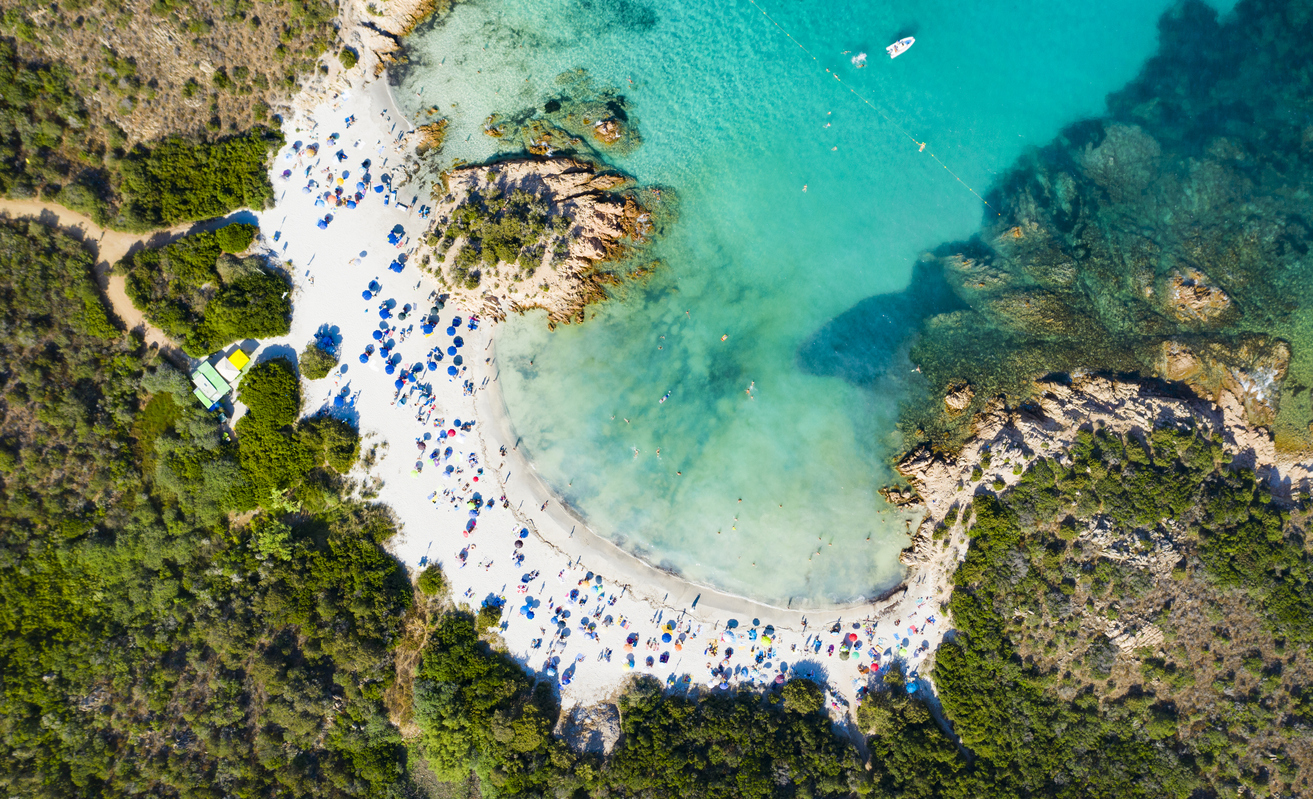 Here along this coast, the top beaches besides the aforementioned Spaggia del Principe (above) are Liscia Ruja (the coast’s longest strand), Capriccioli, Grande Pevero, and Piccolo Pevero, all with their own special attractions.

Some 20 minutes south of Olbia, you’ll find more sweet strands in a protected area called the Tavolara and Punta Coda Cavallo Marine Preserve, both on the coast – Cala Brandinchi (aka Piccola Tahiti), Punta Est, Cala Suaraccia (aka Le Farfalle) – as well as offshore Tavolara Island (above), accessible via ferry from the town of Porto Cesareo and superb for diving/snorkelling along with dolphin spotting.

Cultural stops include the ruins of the 13th-century Castello di Pedres, just 15 minutes outside Olbia, with panoramic views over the bay and the island’s northeast. Older ruins can be found around here, as well, such as a couple of sites traced to the aforementioned Bronze-Age Nuragic civilisation. One of them is one of several grave sites dubbed “tombs of giants”, with huge cut stones stacked on top of each other, at Su Monte de s’Ape, dating back to 1800 to 1100 BCE.  The other, for many even more impressive, is the 18-metre (59-foot) Sa Testa Sacred Well (above), an underground shrine built around a natural spring and devoted to worship of water deities.

Sun, sand, sea, culture, history, delizioso food….Sardinia is a keeper, and when you visit, Olbia and its surroundings in the Gallura region should definitely be part of what’s guaranteed to be a marvellous holiday experience. For more information in English, check out SardegnaTurismo.it, Sardegna.com, and CiaoSardinia.com.