Beyond its A-list blockbusters and easily hundreds of other compelling destinations, Spain is rich with fascinating places that don’t make “bucket lists”, nor do they surface all that much on Instagram and travel blogs (Love2Fly covered one, Soria in Castile-León, earlier this year). And while the central-Spanish region of Castile-La Mancha offers visitors its own share of marquis allures, such as the magnificent ancient city of Toledo and the fabled windmills of La Mancha made famous by Don Quixote (Spanish literature’s most famous novel, by one of the most important of its writers, Miguel de Cervantes) it also harbours plenty of lesser known corners that are rewarding in their own way. One of them is the province – Spain’s third largest – and eponymous capital of Ciudad Real.

Mostly flatlands that are part of the La Mancha plateau, much of the province is arid except for an area of wetlands. The eponymous capital, Ciudad Real is a good place to start your explorations. About an hour by AVE high-speed rail from Madrid and Córdoba, as well as an hour 45 minutes from Seville, it’s small for a provincial capital, with a population of about 75,000, and since it’s mostly a modern working city, it’s not a tourism magnet. Nonetheless, the centre of town harbours a number of landmarks and museums that offer a pretty interesting day or so of touring. 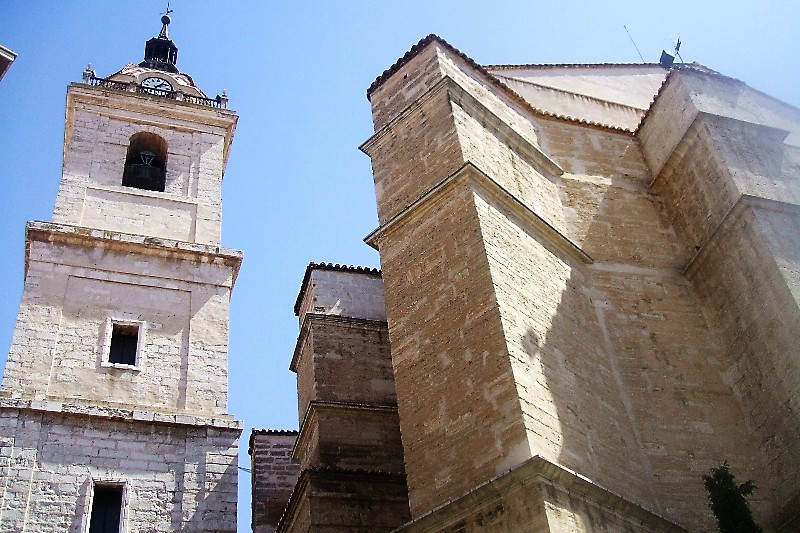 The centre of it all, as in many Spanish cities, is the Plaza Mayor (top), its buildings graced by ground-floor arcades and restaurants/cafés for enjoying local specialities (including manchego cheese and the very good local La Mancha and Valdepeñas wines) and presided over by the Neogothic city hall and a seated statue of Castile-León’s king Alfonso X, founder of the city in 1255 as a bulwark in the ongoing Reconquest of Spain from the Muslims (hence its name, “Royal City”).

Nearby, the 15th-century Casa de Hernán López del Pulgar is home to a museum of local art and history as well as the city’s cultural centre, and across from it you’ll find the also-15th-century Cathedral of Santa María del Prado (above), a mix of Romanesque (from a previous shrine), Gothic, and Renaissance. Another nearby church well worth a look is the 14th-century San Pedro, a stolid, blocky affair mixing Gothic and Mudéjar (post-Reconquest but Islamic-inspired).

From the same century, you’ll find more Mudéjar in the Puerta de Toledo (above), the remaining gate of the eight which once accessed the old walled city, with its pointed horseshoe arches (small sections of the old city walls are also in evidence). Much of the rest of the city’s more historic architecture dates from the 19th and early 20th centuries.

As for museums, in addition to the one mentioned above you’ll want to check out the small, white Museo de Ciudad Real, with a major archaeological collection dating back to the Palaeolithic as well as a natural sciences section with three-million-year-old fossils. Another must is the Museo del Quijote, dedicated to Don Quixote, including exhibitions relating to the novel, its author, and their era, such as the recreation of a Madrid printing shop at the start of the 17th century, when the novel came out.

Out in the Province

Just a short drive outside town, the Alarcos archaeological site has ruins dating back to the 6th century BCE, including a fortified town of the Iberians, the tribes who inhabited Iberia in the Bronze Age, as well as a 12th-century castle and Gothic chapel.

Just a little farther afield – a half hour’s drive south – the town of Campo de Calatrava known for its nearby volcanic field with solidified lava domes, cones, and craters, but also a number of medieval fortresses, palaces, and other landmarks, a legacy of the era when this area was part of the frontier between Christian Spain and Muslim Al-Andalus. And an hour and a half from here as well as Ciudad Real city, the county of Campo de Montiel is home to yet more castles and monuments of the Middle Ages.

A 90-minute drive west from Ciudad Real, meanwhile, will take you to a historic spot that’s more unusual. The area around the town of Almadén is home to the world’s largest deposit of quicksilver (aka mercury), as well as a UNESCO World Heritage Site that was a mining town dating back to ancient Roman Hispania. You can visit a host of buildings and other sites relating directly or indirectly to its mining history, such as Retamar Castle, a medieval hospital, mining university, prison, traditional 18th-century dwellings (some of which form the edges of Almadén’s hexagonal bullfighting ring), and a “mining park” including tunnels and smelting facilities.

Finally, ecotourism aficionados won’t be disappointed by Ciudad Real’s trio of national parks. Cabañeros in the province’s northwest  is home to the best and largest surviving area of Iberian Mediterranean forest, characterised by oaks, wild olives, and juniper and wildlife including boar, deer, and the endangered Iberian lynx. By contrast, Las Tablas de Daimiel, just a half hour northwest of the capital, is a wetland that’s also the smallest of Spain’s 15 national parks. Outfitters may help you spot otters, boar, polecats, foxes, and of course a wide variety of birds here. And down near Campo de Montiel, Lagunas de Ruidera is a park centred around five small lakes (as well as another 11 in the next-door province of Albacete); in addition to more great birding, several of them, like Laguna del Rey, offer swimming, boating, water sports, and eateries/lodging catering to holidaymakers.