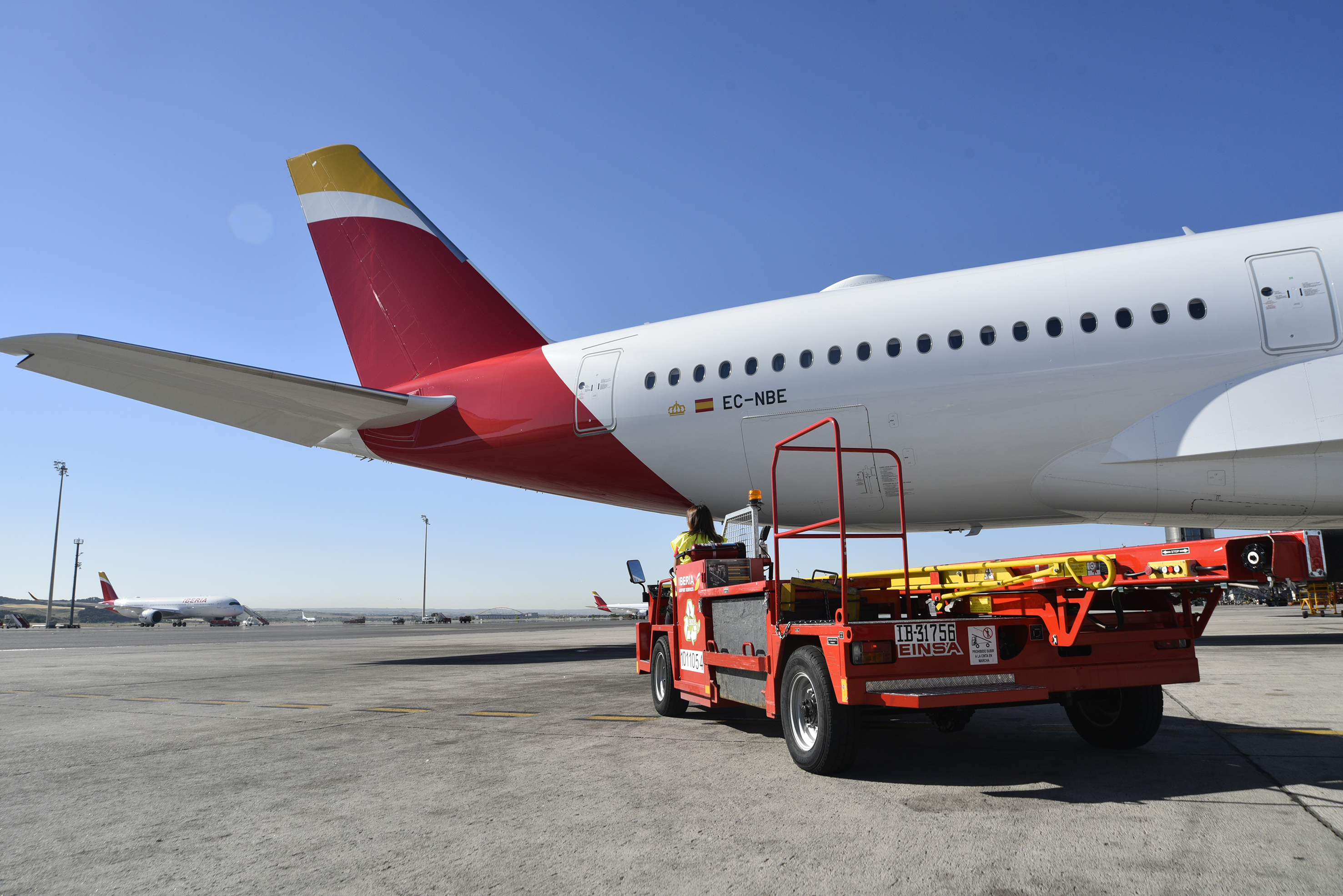 Environmental sustainability – yes, you could say it’s a “buzz phrase”, but even so, it’s a concept that all of us need to focus on in the years to come in order to save our planet’s biosphere. Many businesses are stepping up to the plate, and Iberia is one of them, with initiatives including more efficient, emissions-reducing aircraft; electric airport vehicles; recycling of inflight waste; digitalisation of as many procedures as possible; and renewable energy in our facilities. It’s a commitment shared by all of our employees. And here are some of the ways we’re going about flying greener in 2019 and beyond.

The option to download your boarding card (below; via Iberia.com or our mobile app) to your handset isn’t only tremendously convenient, but also a tremendous paper saver – if everyone transitions to e-boarding cards, it saves 80 tonnes of paper each year.

On both the Ibera app and at check-in, passengers may download their choice among more than 7,000 digital magazines and other e-publications to enjoy during their flights. Here, too, the phasing out of paper inflight publications saves tremendous amounts of paper – 640 tonnes a year – and in addition means less weight onboard, which in turn translates to lower jet-fuel consumption and exhaust emissions.

After the recent renovation of our Premium Lounge in Terminal 4 of our Barajas Airport home base, we’ve substituted beverage cans and plastic containers with glass bottles that are returnable – eliminating waste to the tune of a million cans and 200,000 containers per annum.

In the last four years, Iberia has renewed more than 80 percent of its motorised ground fleet, and nearly 40 percent of that is electric (top); on those vehicles not suitable as electric, catalysers have been installed to make their petrol engines more efficient. 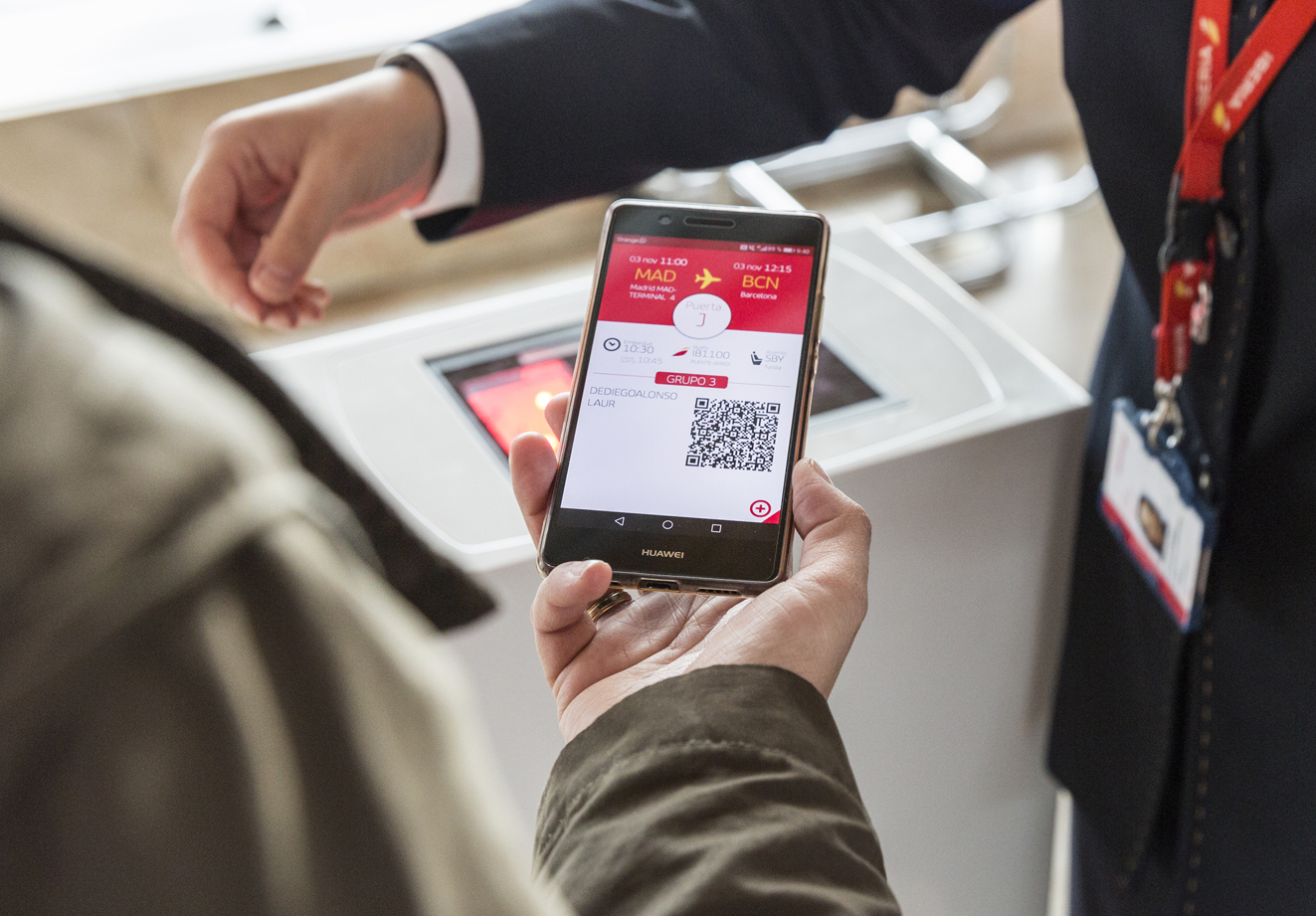 Since 2018, Iberia has been in the process of renovating its long-haul fleet (with an order of 20 Airbus A350-900‘s) as well as its short- and medium aircraft, with the A320neo model. Thanks to its design, the materials with which it’s constructed, and the fact that it’s equipped with Rolls-Royce Trent XWB-84 engines, the A350-900 is currently the most silent-running aircraft on the market, as well as saving up to 25 percent on jet fuel (and therefore reducing emissions by the same proportion). The A320neo, meanwhile, reduces the aircraft’s aural track by 50 percent, as well as emissions of nitrogen oxide and carbon dioxide, by 50 and 15 percent respectively.

This procedure has been applied to waste-disposal sorting on all long-haul flights, and beginning this past June, also short- and medium-haul. The result will be a cut in emissions of 4,340 tonnes of carbon dioxide – the equivalent of 340 flights between Madrid and Barcelona.

The gradual elimination of plastic from products consumed inflight; discounts for passengers who bring their own beverage containers or reuse those given to them by flight attendants; additional procedures leading to less fuel consumption and emissioons; and many other projects in the works to reduce waste, promote recycling, re-use, and generally favour an ethos of sustainability.

Iberia has also has launched a number of internal campaigns to promote more sustainability on a corporate level, out of public sight. In addition to the increasing ongoing digitisation of the company’s operations, we’ve also arranged with our electricity provider that it source our power usage from 100-percent renewable sources, as well as a variety of smaller initiatives among employees, such as introducing a ride-share app and encouraging them to bring their own cups and glasses to work instead of using disposables.

A few weeks ago the Iberia Group published its 2018 Sustainability Report, which among many other facts about the company summarises many of these ongoing efforts and initiatives. Iberia’s social and environmental commitment is in line with the United Nations’ Agenda 2030 and its 17 objectives for sustainable development. And we also take part in the “Responsible Tourism” working group along with another 13 companies from the tourism industry, coordinated by the Spanish network of the UN‘s Global Compact. In addition, among other transnational commitments we also adhere to the World Tourism Organization’s Global Code of Ethics for Tourism; the Convention on International Trade in Endangered Species of Wild Fauna and Flora; and the United for Wildlife Transport Taskforce.