Visitors and locals alike are both still luxuriating in Denmark‘s lovely summer weather, with sunny days and an average temperature of 23° Celsius (73° Fahrenheit). Copenhagen – one of Lonely Planet‘s top ten cities to visit in 2019 – is full of historic sites, cultural opportunities, and for hanging out, cool neighbourhoods like Norebro and Vesterbro, once working-class neighbourhoods and now something like the local equivalent of SoHo or West London, complete with trendy boutiques, eateries, drinkeries, and hipsters into the latest and coolest, who read design magazines in cafés. But recently, I also discovered growing coolness on an island called Amager, which until not so long ago was known mostly to københavnerer.

South of central Copenhagen, most people have been to this 96-square-kilometre (37-sq.-mile) island reachable by bridge and Underground line – but only because it’s the site of the city’s airport (CPH). It’s also worthwhile coming back here for a great change of pace. In part this is thanks to its lovely outdoorsy offerings – the Naturpark Amager takes up a full third of the island out west with a variety of landscapes lovely for hiking and biking (along with a nature centre with exhibits and activities), while on its east coast Amager Strandpark (top) is a popular 4.5km (2¾-mi.) stretch of beach with an amenity-laden boardwalk, a sandy offshore island, and at its northern end, a trio of saltwater pools. Just a couple of minutes south is another, much newer (2005) sea-bathing favourite Kastrup Søbad (above), an award winning swimming complex affectionately dubbed “the Snail”. And just south of here, National Aquarium Denmark, Den Blå Planet is northern Europe’s largest, and surrounded on all sides by water. 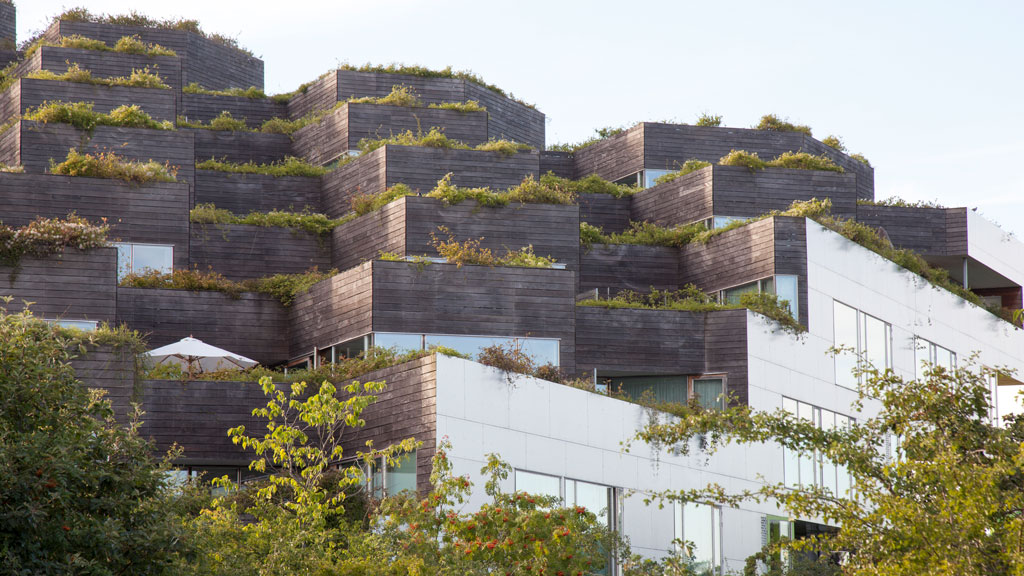 The Søbad’s innovativeness leads me to another side for which Amager is becoming increasingly known, over toward the centre and west of the island and especially in and around the planned town of Ørestad, which started to be developed just 18 years ago and has become the site of important institutions like the DR Concert Hall, Scandinavia’s largest hotel, and Denmark’s national TV broadcaster as well as its largest shopping mall. All that means it’s also become ground zero for cutting-edge architecture such as the 11-year-old award-winning VM Mountain (above), two blocks of flats – one in the shape of a V and the other an M – with cheeky triangular balconies jutting from the buildings.

Another example is 8 Tallet, which takes its name from the figure eight it was designed to resemble. Winner of the 2011 World Architecture Festival‘s Housing of the Year award, this housing development is a harmonious mix of flats, shops, and dining.

And back to that DR Concert Hall – the home of the Danish Symphony Orchestra and hosting myriad other forms of performance was inaugurated in 2009 and designed by Pritzker-Prize-winning French architect Jean Nouvel. Its complex interior is famed for its superior acoustics, and its brilliant blue exterior flashing intriguing images is nothing short of spectacular. But for some locals, in recent years Copenhagen’s true “it” neighbourhood has become Refshaleøen, a peninsula at Amager’s northeastern tip that was home to one of the world’s largest shipyards for more a century, till it closed in 1996. Now it’s an industrial-chic cultural district home to a slew of galleries, shops, restaurants, cafés, microbreweries, and more – many of them on the cutting edge. Three of the biggest deals here are the  Copenhagen Contemporary museum, occupying the shipbuilder’s onetime welding hall; the Reffen street-food market; and CopenHill, which when it opens this October on the roof of a new waste-management facility will offer hiking, wall-climbing, and even skiing (on a silicone track).

Ja, the Little Mermaid still awaits out in the harbour, but today’s Copenhagen is a far cry from Hans Christian Anderson‘s “salty old queen of the sea”!