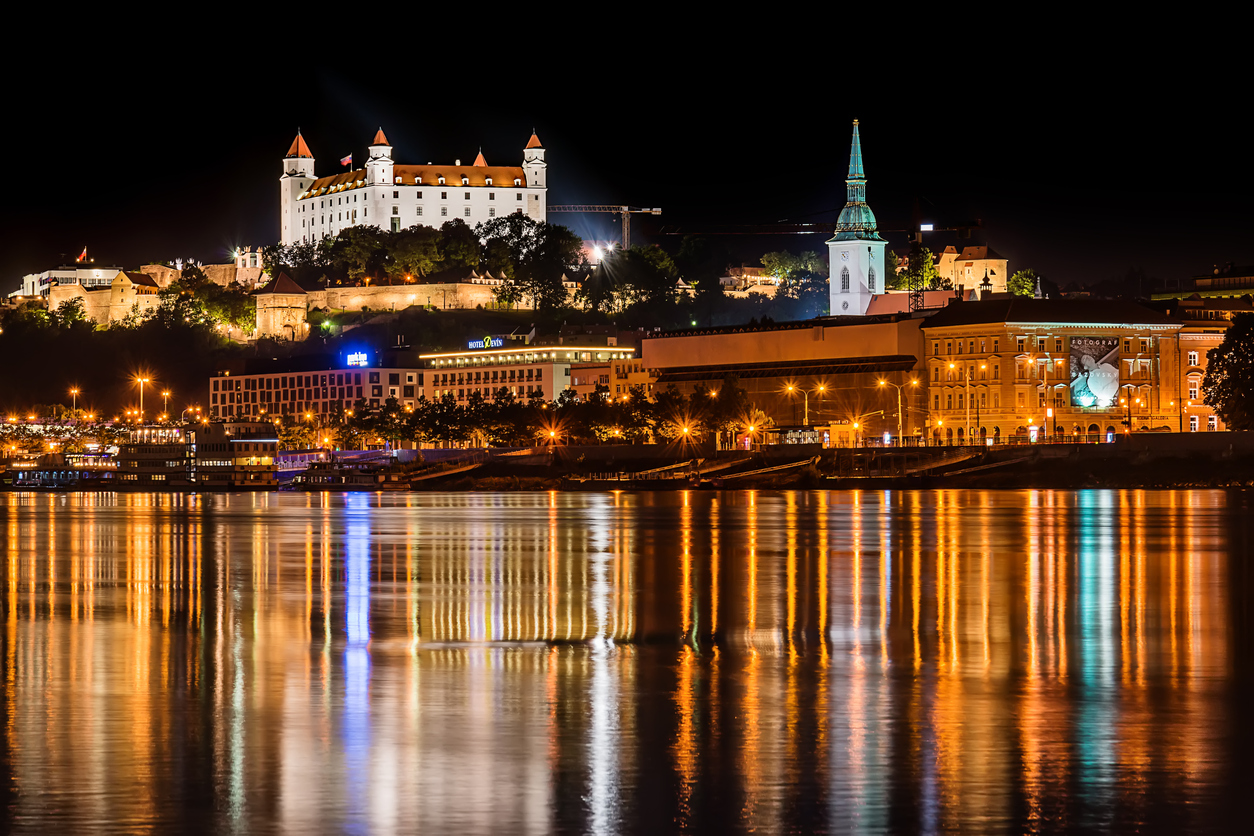 In the delicious blend of old and new that are Central Europe and Eastern Europe, many amazing destinations once locked away behind the “Iron Curtain” of the 1940s through 1980s have of course become favourites of international travelers – particularly the likes of Prague and Budapest. But others have definitely remained a bit more under the proverbial radar both in terms of tourism and general world presence, and the Czech Republic‘s immediate neighbour to the south, Slovakia, is an excellent example.

Once part of the Kingdom of Hungary and the Habsburg Empire, then the junior partner the country of Czechoslovakia with their close cousins the Czechs, the Slovaks broke away in 1992 and then kept a fairly low profile for a number of years. But lately Slovakia has been feeling its oats – becoming increasingly prosperous; just recently inaugurating its first female president (as well as its youngest and most progressive to date); and getting the word out about the exciting allures of a country slightly larger than Mississippi and not even two thirds the size of Scotland.

It’s also easy to get to – just a three-hour drive or four-hour train ride to capital Bratislava (very near Slovakia’s eastern border, with Austria) from Iberia gateway Prague and even much closer to Vienna (also an Iberia gateway), just over an hour by rail or hydrofoil and less than an hour by car; BTS airport also handles flights to/from various medium-haul destinations. I came here recently to trace my family roots thanks to one of my grandfathers, but really wasn’t expecting to find a country so delightful, with such a fascinating history, beautiful architecture, and unspoilt countryside. And having visited others of its neighbours in Eastern Europe, I expected prices here to be good, but was very pleasantly surprised as to how low.

Like Vienna, Bratislava (pop. 430,000) is located on the Danube River, and these days it’s a buzzing city with myriad shops, cafés, restaurants, and bars (Slovaks are biiig beer drinkers, try the local brands like Šariš and Zlatý Bažant). At the centre is a small medieval core which though sliced through by an ugly Communist-era bridge is still atmospheric (it can also get a bit crowded in summer – both with locals and many of the roughly one million tourists who visit here annually). The hub of this Staré Mesto is its main square, Hlavné Námestie, home to the Gothic Stará Radnica (Old City Hall, housing the city museum and a 45-metre/148-foot tower with great views over the Old Town), the neo-Baroque Palugyayov Palác (used by the Ministry of Foreign Affairs), and at its centre Roland Fountain topped by a statue of 16th-century king  Maximilian II. Other major landmarks nearby include the 13th-century Gothic St. Martin’s Cathedral, the late-17th-century neoclassical Primate’s Palace (now home to a collection of – of all things – rare English tapestries).

Bratislava also has some interesting landmarks of more modern vintage, as well, such as the 1920s Synagoga Slovaca (the country’s only remaining synagogue, designed in Cubist style and home to a Jewish community museum); the Modrý Kostol (a blue Art Nouveau Catholic church with white trim); and on a hilltop in the outskirts, the Stalinist Slavín World War II memorial to the nearly 7,000 Soviet soldiers who died liberating the city from the Nazis.

Finally, on another hilltop above it all looms the most notable landmark of all: massive, rectangular Bratislavský Hrad (Bratislava Castle), whitewashed and red-roofed, dating back to the 9th century but its current Baroque aspect fixed in the 18th. Today it houses a branch of the Slovak National Museum dedicated to the country’s history.

(By the way, Bratislava is not only popular with day trippers from Vienna, but conversely, I met plenty of people who actually chose to stay here as a base for visiting Austria’s capital, as it’s so close and provides more affordable accommodation.) 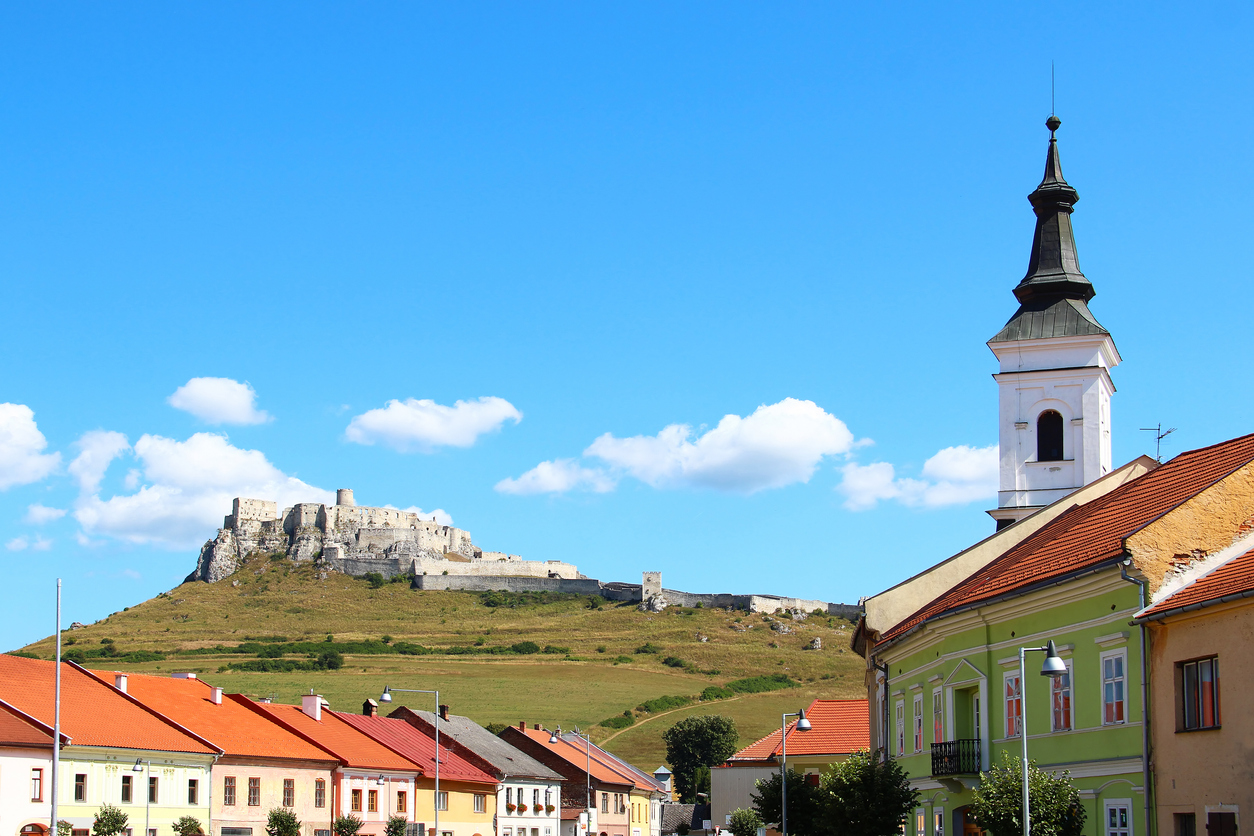 Out in the Hinterlands

Arguably, however, the essence of still mostly rural Slovakia lies outside its increasingly cosmopolitan capital, beginning with Little Carpathians and five other wine regions south and southwest of Bratislava, with a winemaking tradition (the best known Slovak wines being mostly sweet Tokaj) stretching back to before the 13th century and Slovak wine routes becoming a growing tourism sector. (There are a number of fine geothermal spas scattered throughout the country, as well.)

As for getting around out here, though the road system is good for hiring a car and taking motorcoaches, SlovakRail is also a fine way to travel around this compact country, and I’d recommend first class – more comfortable, less crowded, yet still pleasantly inexpensive. Here are three of the main areas I’ve found of interest to most visitors: 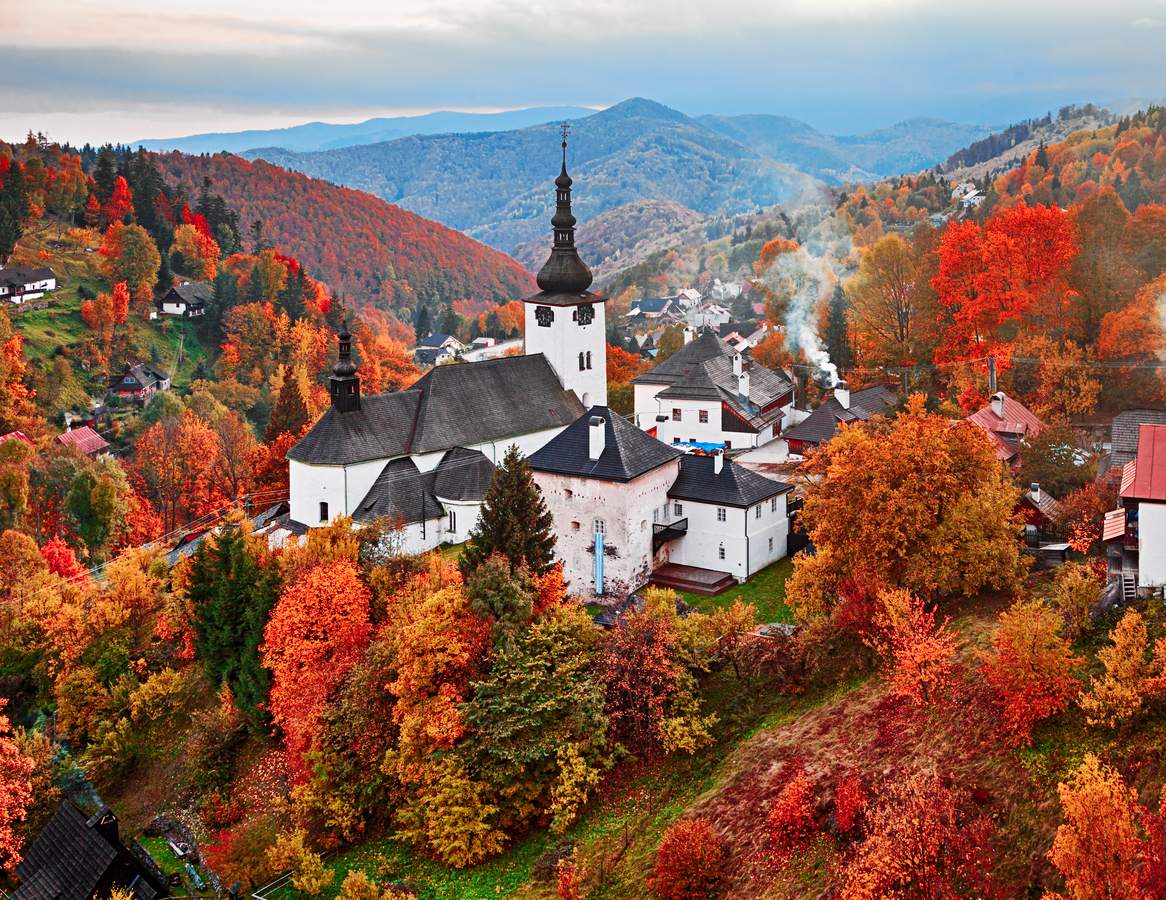 The single largest of Slovakia’s eight regions, in the centre of the country, this mountainous swath (including the Low Tatras range) is also the least densely populated,
with forests full of wildlife-spotting and outdoor-adventure options; fascinating caves; the vintage Čiernohronská Forest Railway; lovely towns such as Špania Dolina; and a “geopark” mixing lovely forestland with preserved historic remnants of the area’s onetime copper-mining industry.

Its capital city, also called Banská Bystrica (pop. around 78,000), meanwhile, boasts a gorgeous historic core hot on the heels of the Renaissance towns of Italy in terms of style and beauty. There’s a long, wide main street peppered with fountains and outdoor cafés, at the end of which main square Námestie SNP features a stone castle dating back to the 13th century and a church with a leaning, 16th-century clock tower (it’s 101 steps to the top); on the hour, the tower plays classical music instead of ringing bells. Perhaps the city’s main attraction these days is the stark, 1960s concrete Slovak National Uprising Museum, which memorialises the eponymous (and alas unsuccessful) 1944 armed insurrection of local partisans and their allies against the Nazi occupiers and the Nazi puppet régime of Catholic priest Josef Tiso in Bratislava; this event is a key part of modern Slovak lore and is even commemorated as a national holiday every 29 August. As a nice bonus, Banská Bystrica is also quite lively thanks to its university and therefore large population of students.

Out in Slovakia’s southeast near the Hungarian border, this fertile and bucolic region is especially known for its lovely national parks, Slovenský Raj and Slovenský Kras (the latter known for its distinctive limestone karst landscape, cool caves such as Jasovská Jaskyňa, and the 136-year-old Štós Spa, which incorporates “speleotherapy” – breathing cave air); castles and manors such as Krásna Hôrka and Betliar; the aforementioned Tokaj wine country; and historic towns and villages like Žehra, Štítnik, and Medzilaborce (this last especially notable for its Andy Warhol Museum of Modern Art, with some works and personal effects of the famed U.S. Pop artist, whose parents Ondrej and Julia Warhola were from here).

The region’s single biggest draw, however, is its eponymous capital, Slovakia’s second largest urb (pop. 240,000), a bit under five hours by road/rail from Bratislava. Košice city’s pedestrian-only old town is centred along its own Hlavné Námestie, a long plaza with a musical fountain (music on the hour, plus a light show at night); the handsome, late-19th-century, neo-Baroque State Theatre; the late-18th-century Shire Hall palace, now home to the East Slovak Gallery showcasing historic Slovak painting and religious sculptures as well as rotating exhibitions of contemporary art; the also late-18th-century Stará Radnica (Old City Hall), now home to the city’s visitor centre and a performance space; and in the middle of the square, the Dóm Svätej Alžbety (St. Elisabeth’s Cathedral), started around 1380. Slovakia’s largest church, its remarkable not just for its soaring Gothic architecture but also its mediaeval art and its Gothic double-spiral staircase – very rare, and also Europe’s oldest.

This is one of several mediaeval remants in Košice’s mostly pedestrian old quarter, with other standouts including Mikluš Prison (now a history museum including the original stone cells); the Urbanova Veža, originally the cathedral bell tower; and the Dolná Brána (Lower Gate), the excavated remains of the city’s original walls and entrance gate. For all its history, however, the city today sports a lively atmosphere, its narrow, winding streets full of cafés, restaurants, bars, and galleries (part of the vibrant local cultural scene showcased when Košice was one of 2013 two European Capitals of Culture). 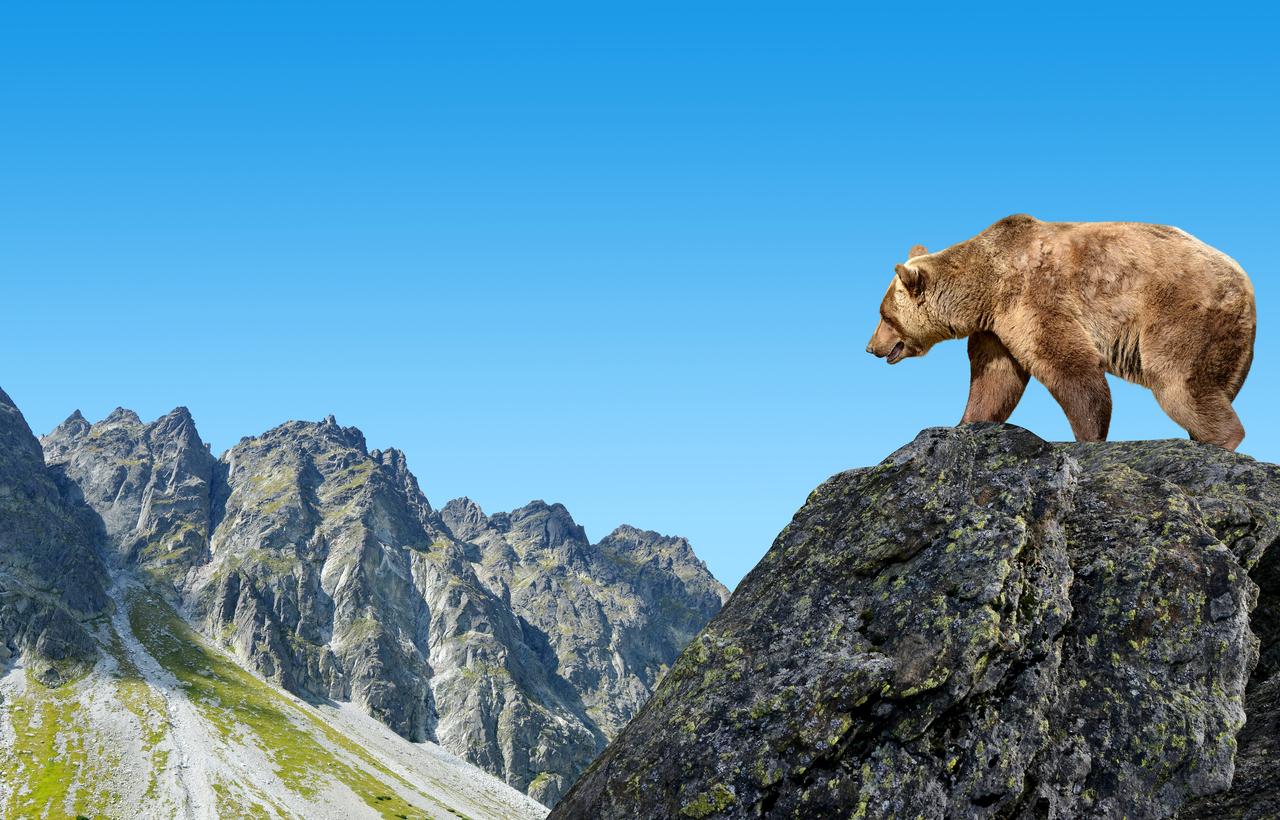 Midway along Slovakia’s northern border with Poland and just north of the Kosice region, the Tatry are the highest mountain range of the Carpathian Mountains that stretch across much of Eastern Europe. They’re packed with craggy peaks (more than two dozen of which break 2,500m/8,200 ft.); forests of beech and spruce harbouring wildlife including antelope, brown bears, wolves, and lynxes; alpine meadows; impressive caves; more than a hundred spectacular lakes and waterfalls; and charming towns/villages where history and/or folk traditions live on, particularly the likes of Ždiar, Spišská Sobota, and Štôla. Opportunities for hiking, biking, mountain biking, ATVing, wildlife spotting, whitewater rafting, and other outdoor/adventure activities abound, and the main town Poprad (3½ to four hours by road or rail from Bratislava, with plenty of grey Soviet-era concrete but also a nice historical centre full of colourful 18th- and 19th-century buildings) is also a good and well equipped base for some fine skiing and other winter sports.

And it’s here that my own personal quest led me, to the town of Podolínec (“Place Between the Hills”), a half hour northeast of Poprad; with a documented history dating back to 1325; and where my dedko (granddad) David Herbst was born one of 12 children in 1896. With a gorgeous mountain backdrop and a population just under 3,200, it’s centred like many old Slovak towns on a historic main square, here presided over by late-13th-century Church of the Acension of the Virgin Mary and flanked by two-storey Renaissance burghers’ houses. Among other things, I found the house my grandfather was born in and descriptions of what the town was like when he was young (for example, I met a 92-year-old man who remembers the names of all the inhabitants and who ran which shop during his childhood). On the outskirts you’ll find the impressive, mid-17th-century Piarist Church and Monastery and a small stone castle from the early 15th century.

Another definite highlights of this area is the much larger (and even prettier) neighbouring town of Kežmarok, whose main claim to fame is its Kežmarský Hrad (third photo, above), a castle compound dating back to 1463 and now housing an interesting local history museum (I was particularly fascinated by photos of the town before and during its occupation by the Nazis). There are also some good restaurants here – one of which belongs to the 30-room boutique Hotel Hviezdoslav, which I loved, occupying a 17th-century burgher’s house. And speaking of castles, the country’s most famous (as well as one of Europe’s largest) is in the charming town of Žehra, a half-hour drive east of Poprad. The dramatic, sprawling Spišský Hrad (Spiš Castle) is a UNESCO World Heritage Site soaked in Romanesque/Gothic atmosphere and home to a museum of history and mediaeval weapons. Žehra is first mentioned in historical record in 1245 and shares the castle’s UNESCO status especially thanks to its onion-domed, late-13th-century Kostol Ducha Svätého (Church of the Holy Spirit) and its wall frescoes.

And believe it or not, there’s much more where all that came from! I’m so looking forward to returning to my ancestral homeland as soon as I can, to explore more of its remarkable history, culture, and nature. And I invite you to put it on your list as well; I guarantee you won’t be sorry.  For more info on the country and its treasures, check out the Slovakia Travel website.

Felice Hardy is co-editor of the ski information website www.welove2ski.com.