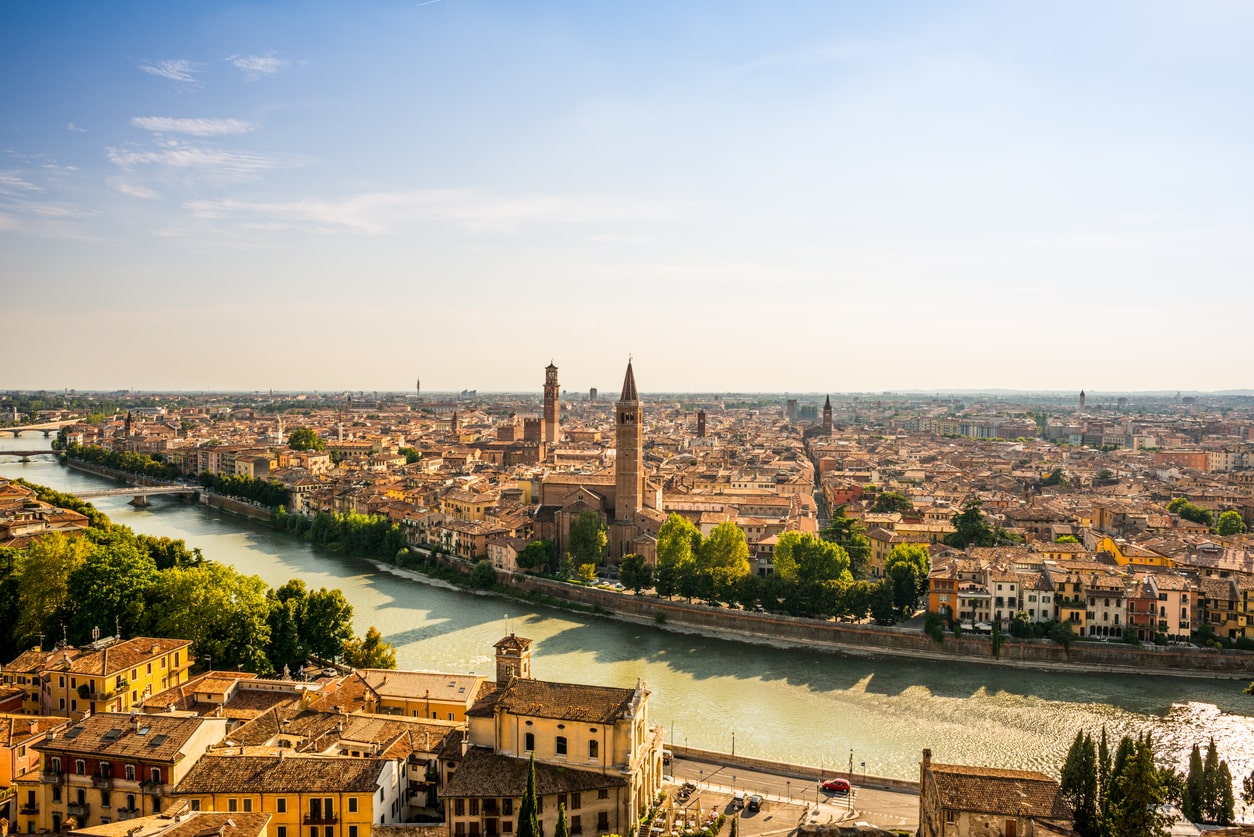 If that’s the claim for this undeniably quite charming northern Italian urb, it’s a pretty bloody big and bold one, on a continent packed with seemingly no end of lovely settlements large and small that positively reek of romance. Heidelberg? Paris, mon amour, for heavens sake? And absolutely no end of entrancing small cities scattered across the hills and valleys of Italy and the rest of Europe?

Well, this in addition to the picturesque piazzas and narrow cobblestone lanes of its mediaeval quarter, handsome Renaissance architecture, the beauteous bridges over the its Adige River, and its spectacular ancient Roman amphitheatre (one of Europe’s largest), it was “in fair Verona where we lay our scene” – namely for William Shakespeare‘s immortal tale of “star-cross’d lovers” Romeo and Juliet. And of course this city of 265,000 (metro area 714,000) has not been shy about making bank on its association with perhaps literature’s greatest love story.


As this blog has noted aplenty, Italy has become a prime focus of the Iberia Group‘s expansion of routes in 2019, with Genoa also in northern Italy along with Bari in the south also being added to its new destinations for a total of 14 in this country alone. And Verona has also been added to the list, as well with for example three weekly flights from/to Madrid in the month of August. Allow me to introduce you here to the urban gem, “rich in beauty”, of the Veneto region – come, we burn daylight, ho! – and take it in what sense thou wilt.

Believed to have its roots in settlement by the Euganei, a pre-Italic, Bronze-Age people, much of the city’s historic centre is a harmonious mix of Romanesque, Gothic, and Renaissance. Its hub is the lively Piazza Brà, one of Europe’s largest public squares, with not just various cafés and restaurants flanking its liston (pink-marble-slab pavement) but also three of Verona’s most prominent landmarks. The neoclassical Palazzo Barbieri, housing the city hall, was built quite late in the game, around the mid-19th century, while the Palazzo de la Gran Guardia with its 13 arcades was completed around the same time even though it started construction in 1610; today it’s a venue for exhibitions and special events. 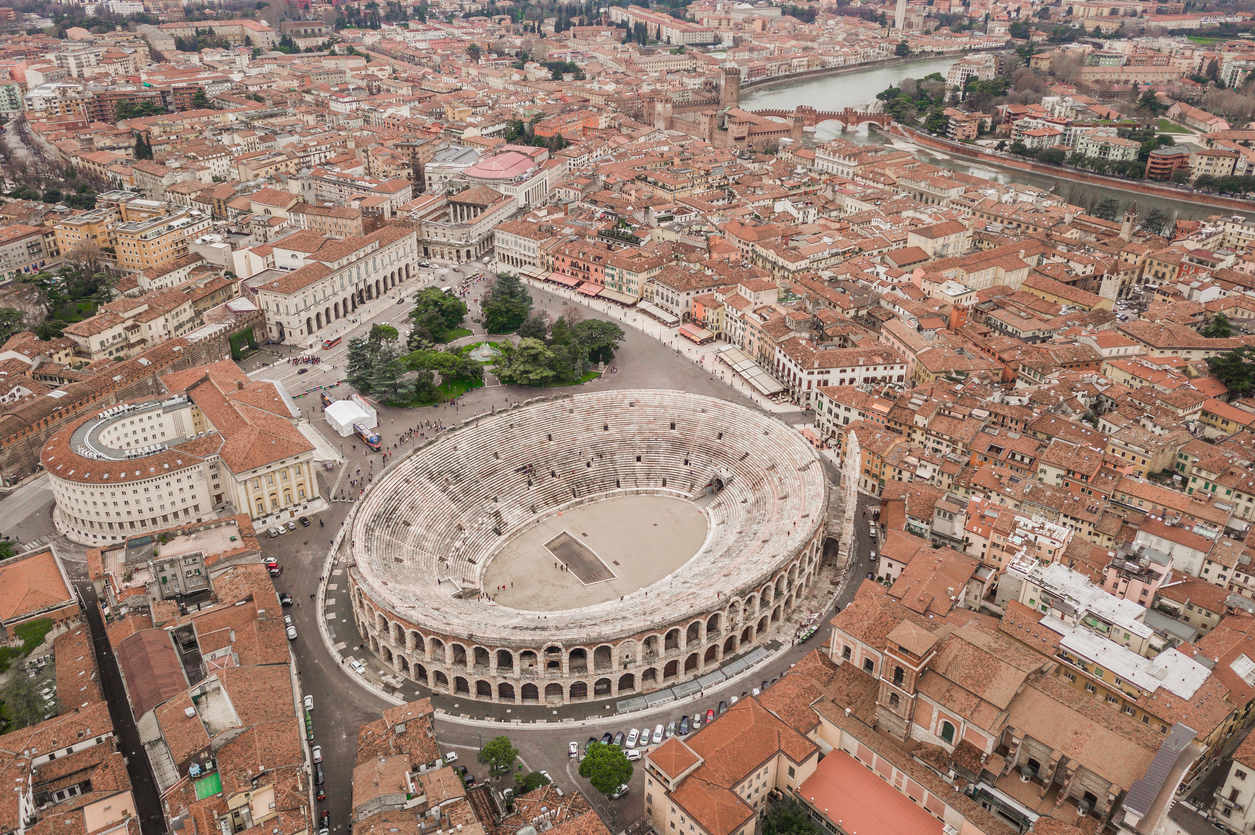 The Brà’s third landmark, however, is one of Italy’s most famous and impressive. Built in 30 CE under Emperor Tiberius, the Arena de Verona is one of the world’s best preserved ancient amphitheatres; accommodating around 30,000 spectators back in the day, thanks to its acoustics and cinematically spectacular ambiance it has long continued to be used for regular performances (it now seats around 15,000) of blockbuster productions from opera to pop and rock (including most recently the likes of Adele, Il Volo, Paul McCartney, and Spandau Ballet).

Actually, the Brà isn’t Verona’s oldest public square; that distinction falls to the Piazza delle Erbe (below), the city’s forum during Roman times, presided over by the 12th-century city hall Torre dei Lamberti, whose 84 metres (276 feet) visitors can ascend (via steps or lift) for impressive views over the old town. Come in the morning to browse its daily street market – around 14th-century fountain crowned by Madonna Verona, a Roman sculpture dating to 380 CE – mixing produce and foodstuffs with handicrafts and souvenirs. Another notable landmark amid the atmospheric mediaeval buildings ringing this piazza is the highly adorned, 17th-century Baroque Palazzo Maffei, whose ground floor now houses an eponymous (and of course fairly pricey) restaurant. Yet another nearby square, the Piazza dei Signori, with a statue of Dante Alighieri at its centre, was the city’s onetime seat of power, ringed by buildings including the Palazzo del Podestà, the Palazzo dei Giudici (still the city courthouse), and the magificent 15th-century Loggia del Consiglio, once the seat of the municipal council. 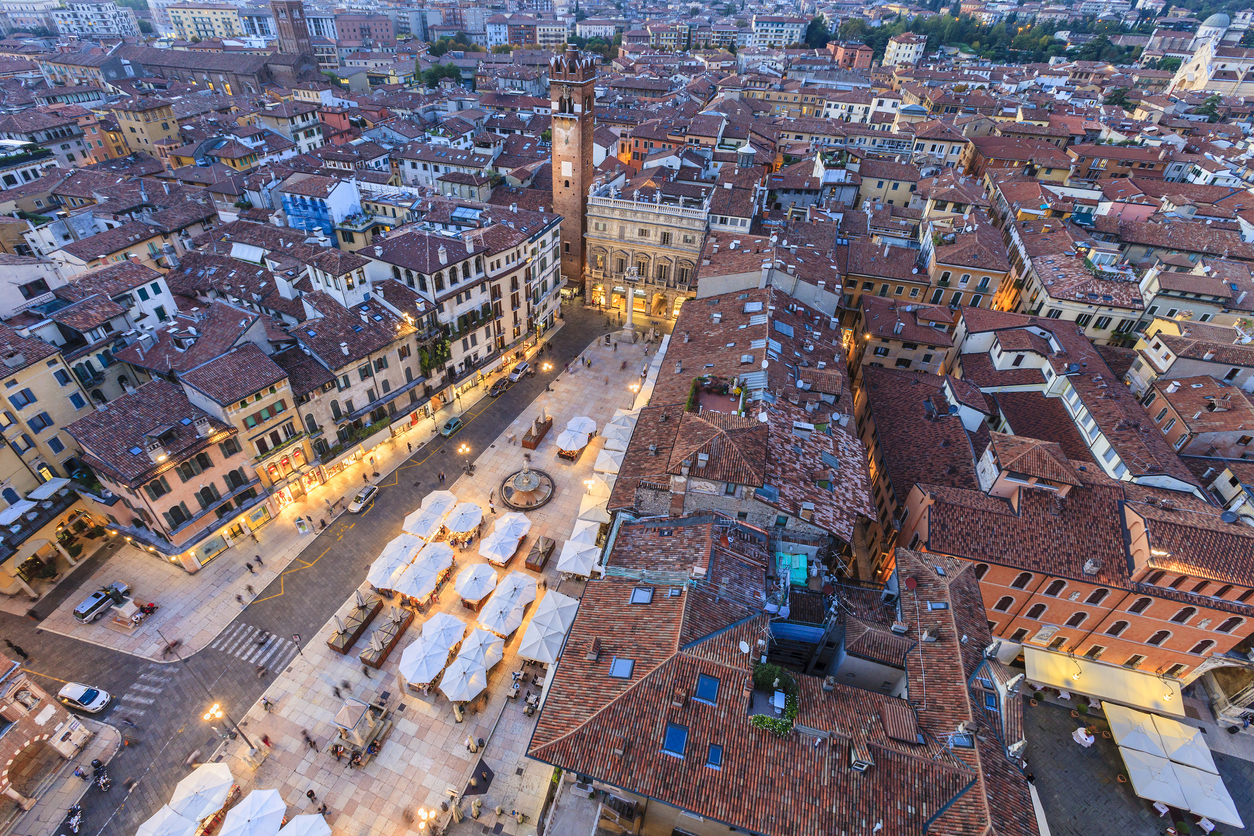 Beyond that, like every good Italian Catholic city this one also has no shortage of churches, and three that also especially merit a visit are the 12th-century Romanesque Duomo di Verona (aka the Cattedrale di Santa Maria Matricolare – relatively modest, but with a lovely interior), San Giorgio in Braida (built in the 16th century in the old town’s most ancient neighbourhood, Veronetta); and the also 12th-century Romanesque Basilica di San Zeno Maggiore (perhaps the most reknowned thanks to its 72m (236-ft.) belltower and Andrea Mantegna altarpiece, in addition to being dedicated to the city’s patron saint and mentioned in Dante’s Divine Comedy as well as Shakespeare’s play, as the place where his legendary lovers wed in secret).

Which brings us, several blocks east of the Piazza delle Erbe, to the Casa di Giulietta, the 13th-century townhouse on Via Capello celebrated at the home of the Capulets. Of course they’re all fictional; the house actually belonged to the Cappello (aka Cappelletti) family for which the street is named, and the similarity in names led to its identification in the popular imagination with Romeo and Juliet. They sold it to the city in 1905, and the famed Juliet’s balcony imagined as the play’s most iconic setting was added afterward, created from a 17th-century sarcophagus. Inside is filled with period furnishings as well as information about the house and the doomed young lovers. 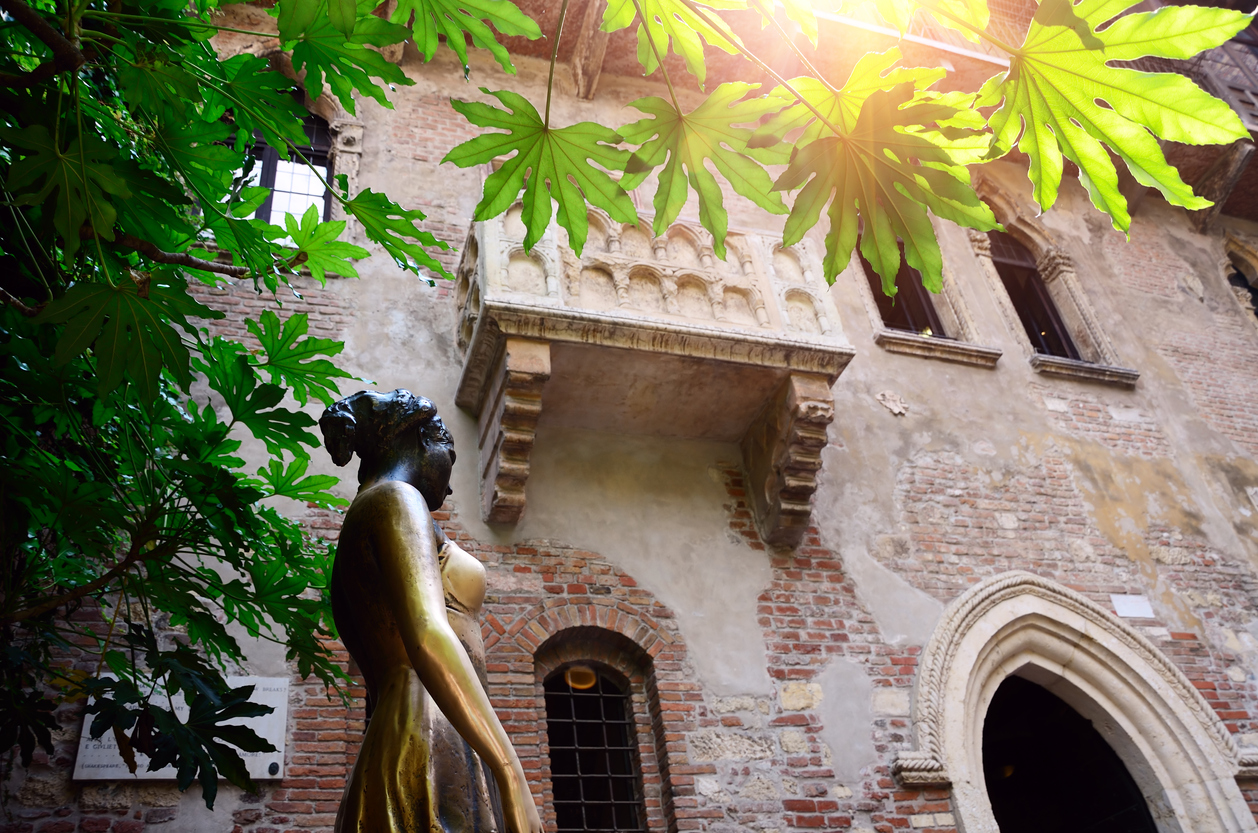 To get to the little courtyard on which the house stands, you pass through a narrow passage between buildings peppered with hundreds of scraps of paper from both lovers and the lovelorn, in dozens of languages (many others even write letters to Juliet, which are answered by several on-staff “Juliet secretaries“). Also in the courtyard, besides the famous balconey above, you’ll find a statue of the young signorina herself, shiny in spots from being rubbed by countless hands seeking good luck.

By the way, if you’re an aficionado of lovely sunsets, it’s well worth catching it here by crossing the Ponte Petra over the Adige and taking the funicular up to the esplanade in front of the Castel San Pietro, ruins of a 9th-century castle and alongside them a neo-Romanesque fortress built in the mid-19th. Plus of course fabulous views out over the city.

Finally, a trio of annual highlights here worth considering are the Arena Opera Festival, held throughout the summer into September, and Verona in Love, a week of events from marketplaces to a half marathon, scheduled around Valentine’s Day; and Carnevale, Verona’s colourful, joyous version of the pre-Lenten Carnival celebrations held across the Catholic world each February/March (depending on the year).

So have I made the case that Verona is Europe’s most romantic city? Whether yes or know, it’s indubitable that there’s a whole lot to love here. Another beautiful bucket-lister, for sure!

By road or rail, Verona is an hour to an hour and a half from both Venice and Milan; for more information on that and the city’s attractions, check out its tourism website.