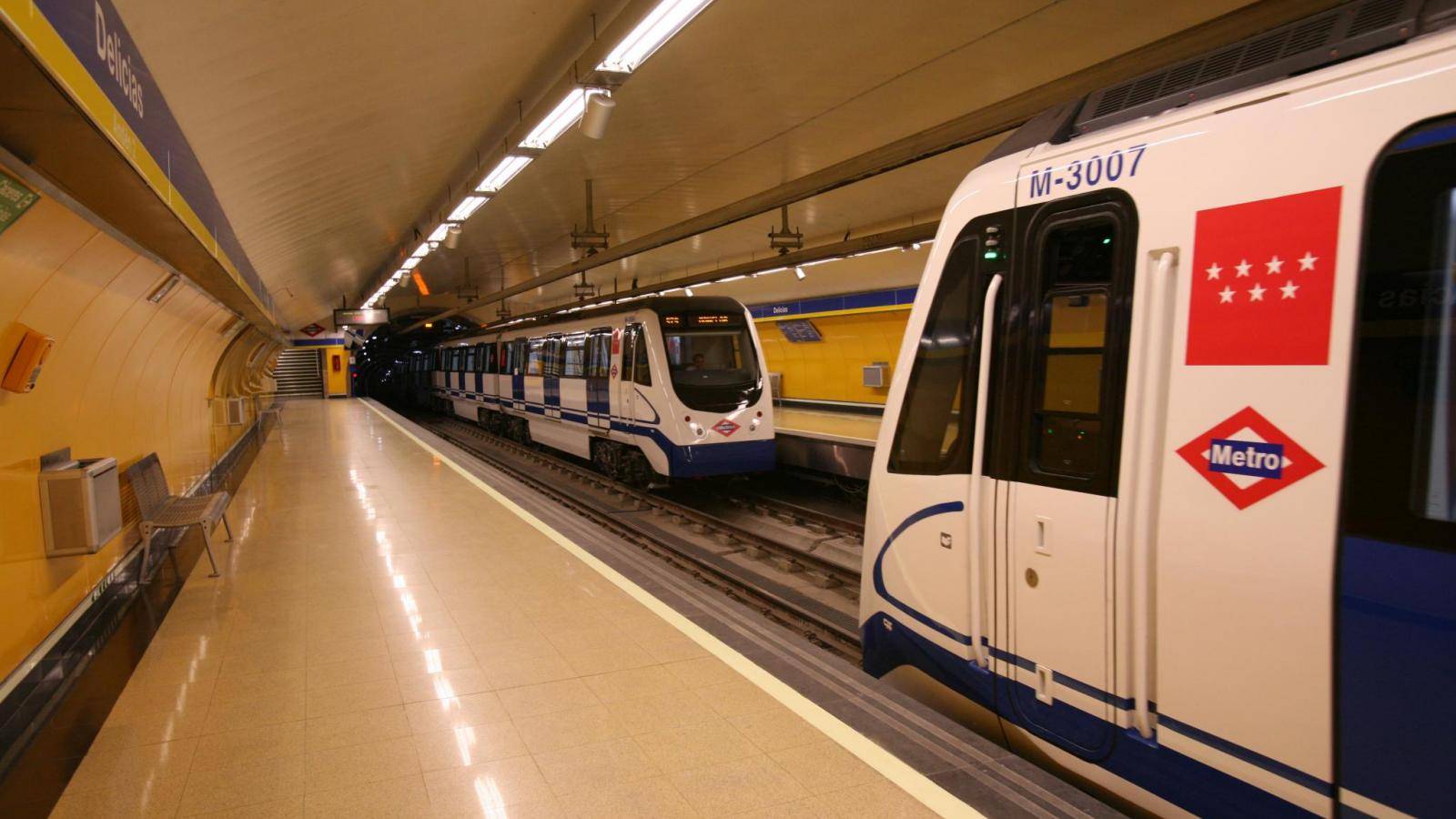 The last decade of the 19th century and the first of the 20th saw a spate of big cities – mostly in Europe and the USA – launch a new era of urban transit by opening underground rail systems. And we as travellers can be extremely grateful, as these wide-ranging Undergrounds make exploring many of the world’s great metropolises marvelously convenient. Nowhere is that more true than in Spain‘s capital, whose Metro is the seventh longest globally, even though Madrid ranks just 50th in population. And this year the city has been pulling out quite a few stops for its Centennial – including myriad events (even a 5K race on streets running above key Metro lines) and a pop-up museum exhibition – since King Alfonso XIII officially inaugurated the Metro, changing the lives of madrileños for the better forever. 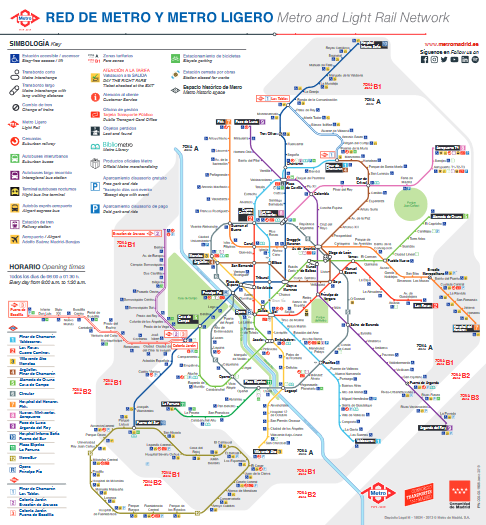 With a daily ridership of around 1.8 million, the 13 lines and 302 stations of today’s Madrid Metro spans 294 kilometres (183 miles) of track, providing dense coverage in much of the city and reaching far out into its suburbs (each ride, by the way, starts at 1.50 euros, with ten-ride tickets starting at 1.12 per ride). But every grand project begins with baby steps, and so a hundred years ago, Line One (this year being celebrated as the Línea Centenario, Centennial Line) ran for a mere eight stops, between the city’s central square, Puerta del Sol, and the Cuatro Caminos neighbourhood, 3.48km (just over 2 mi.) north, and on its first day, 56,220 passengers rode the line. 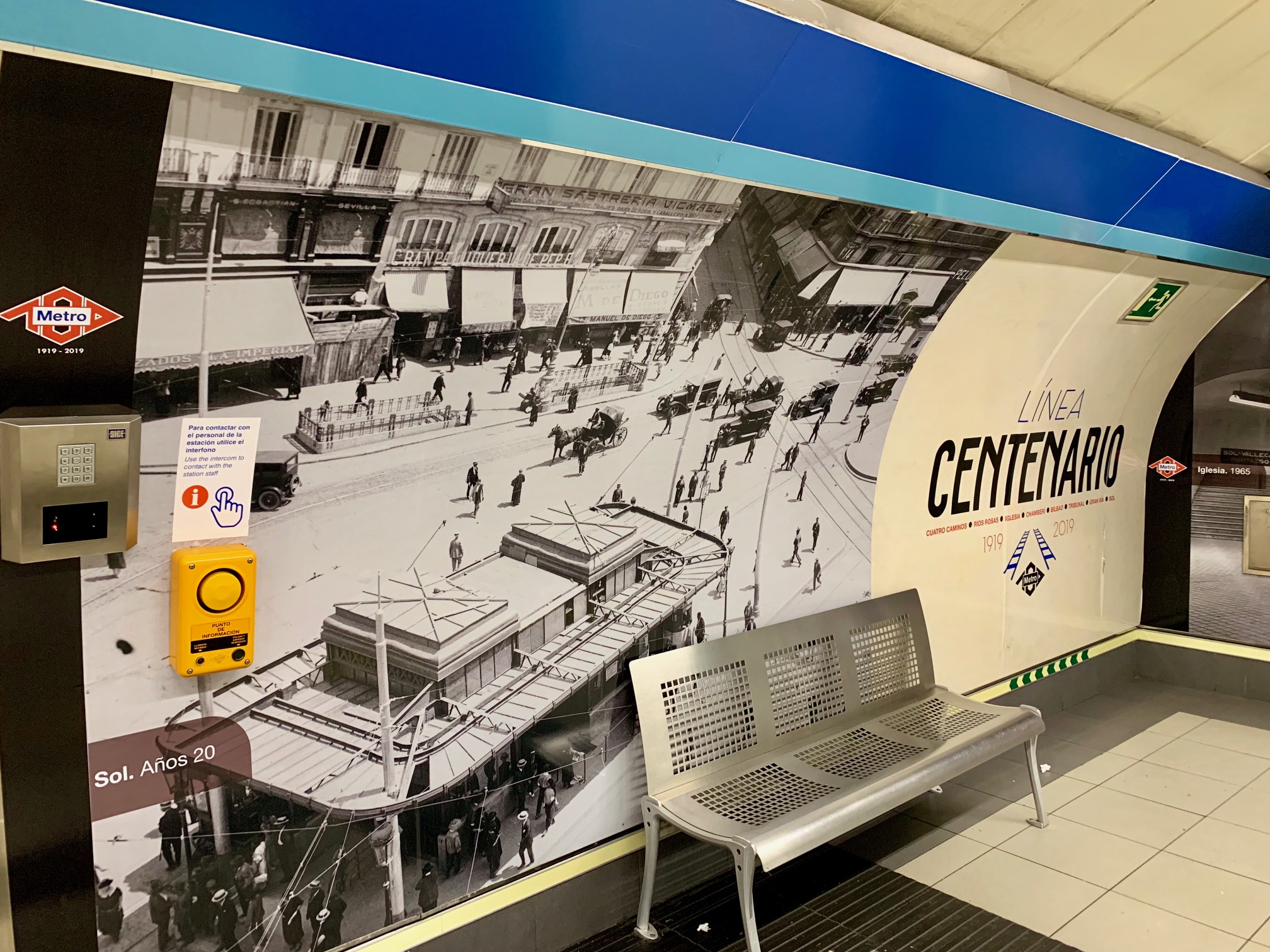 I became interested in all this because here in Madrid I discovered my local stop, Tribunal, is on the Línea Centenario, and I found myself fascinated by the old photos the Madrid Metro authority had plastered all over the station in what is now a permanent exhibition (above). I followed that up with a trip to the aforementioned, free-of-charge pop-up museum in the historic Nave de Motores de Pacífico, the red-brick 1920s building where massive, repurposed steamship engines once supplied power to not only the new Metro system but much of the city. Here amid those black behemoths the history of the evolving network as well as many of its current features were laid out in artifacts, photos, multimedia, and documents. 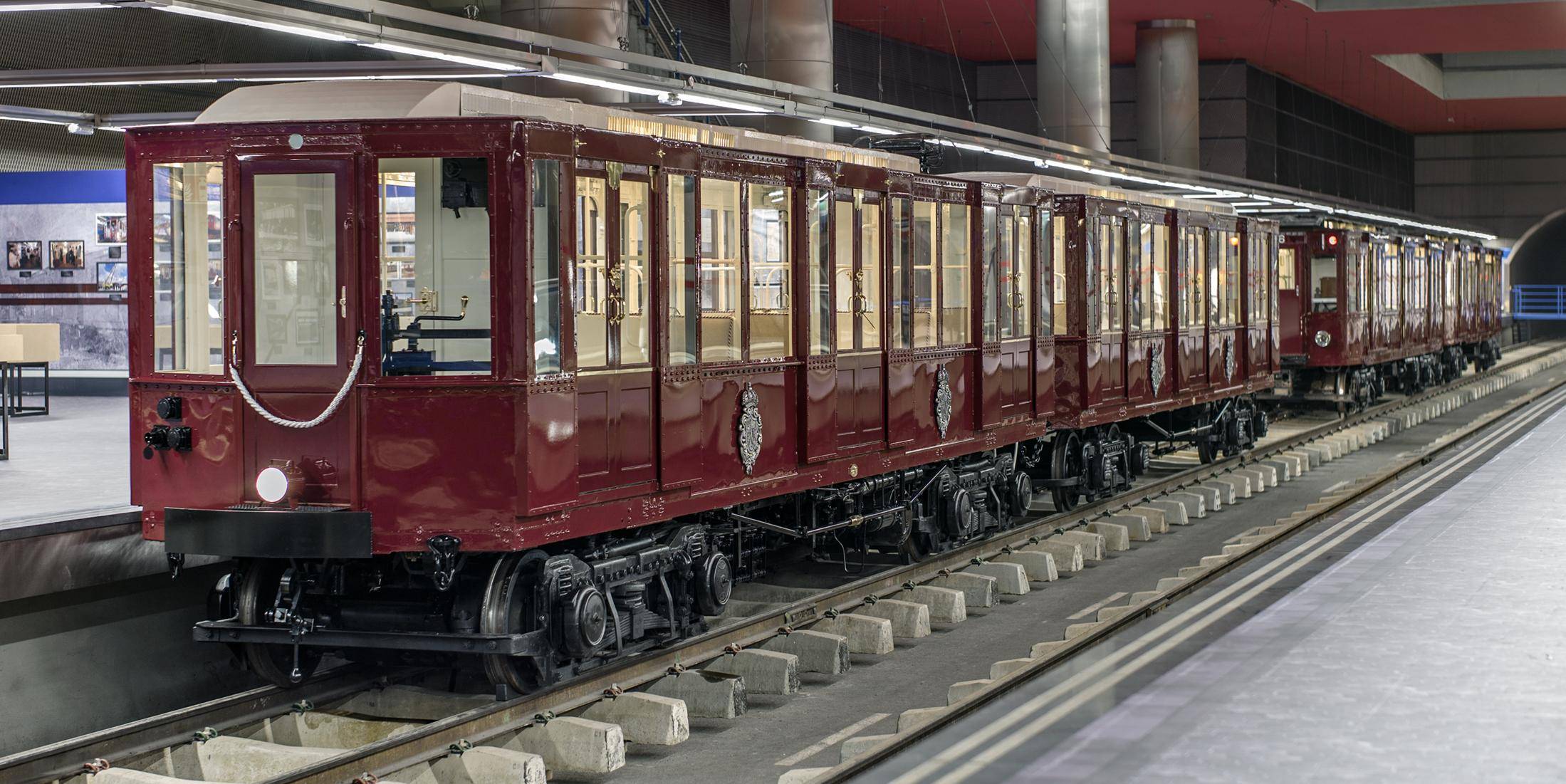 That exhibition is already gone, but visitors can still get a fascinating dose of Metro’s history at the city’s Chamartín Station, where a permanent exhibition gives you a chance to explore nine vintage train cars and peruse displays including a hundred artifacts from the system’s past – antique phones, uniforms, tools, and much more.

Parenthetically, a couple of other stations also offer grist for the mills of culture and history buffs. The Atocha Station (above), right in central Madrid’s “museums triangle” embracing the Prado, the Reina Sofía, and the Thyssen-Bornemisza, gives riders an eyeful of dozens of works of antique and modern art drawn from these institutions’ formidable collections. And the also central Ópera Station (named for the nearby Teatro Real opera house and also very convenient to the royal Oriente Palace), has a museum showcasing some remains of 16th- and 17th-century waterworks uncovered during a 2011 remodelling – the Renaissance Caños del Peral Fountain, the Amaniel Aqueduct, and the Arenal Sewer; alongside there’s a multimedia display explaining their history.

All in all, a fascinating past; a robust present; and a dynamic future. Come ride the Madrid Metro and you’ll see what I mean!