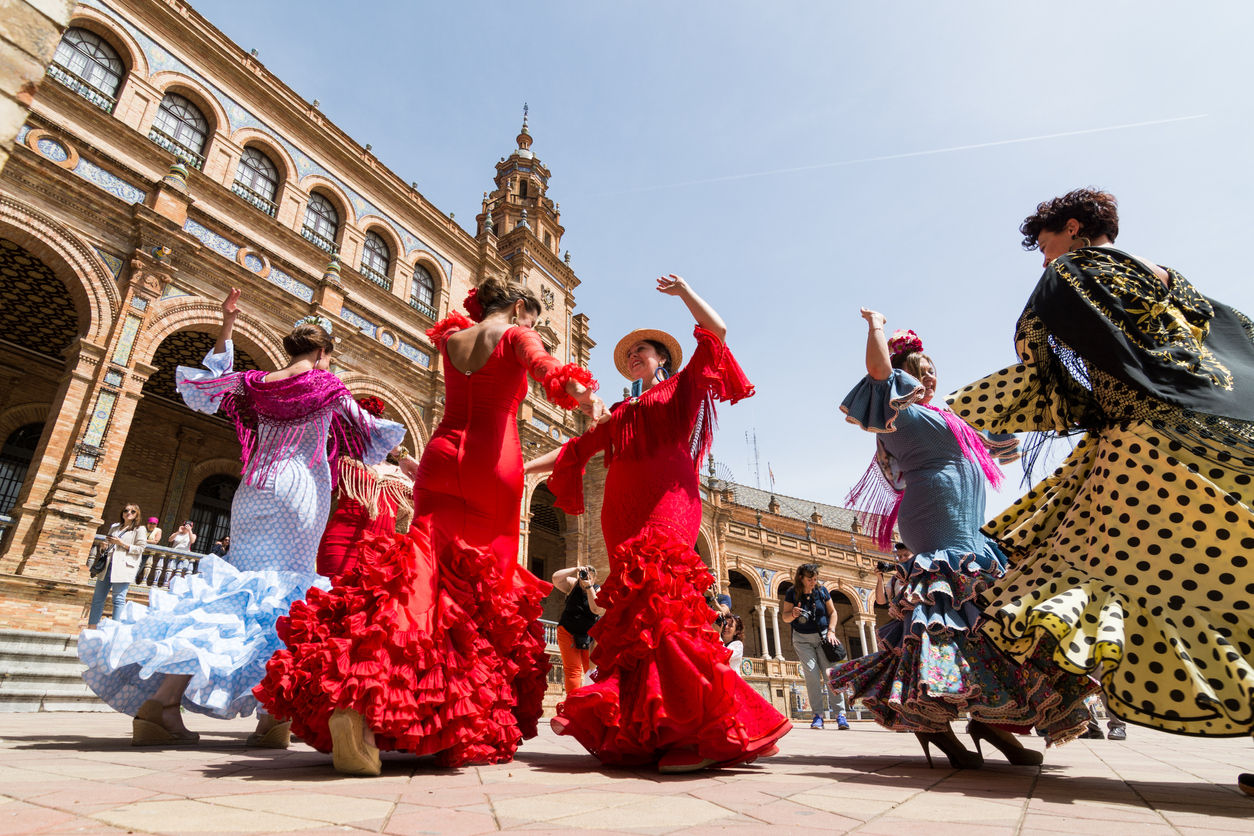 ¡Olé! When it comes to Spanish dances, who hasn’t at least heard of flamenco? And if you’ve witnessed it being performed, you’re inevitably hypnotised by its sinuous moves; rapid, hypnotic shoe tapping; staccato hand-clapping; mesmerising guitarwork; and plaintive singing. But many regions and many traditions means many dances, and so here are a key half dozen you’ll come across as you waltz your way across Spain.

“Scaramouch, scaramouch, will you do the fandango?” Thanks to Freddie Mercury and Queen, many people at least know this word (and even more so in the USA, where it’s also the name of a popular theatrical-movie-reservation app/website), but likely few have a clue that it’s an old traditional dance – probably with roots in Moorish Al Andalus of the Middle Ages – founded in several regions including Andalusia and Castile. Danced by couples or groups of couples usually in 3/4 or 6/8 time and accompanied by guitar, the fandango starts slow and builds in speed, marked also by hand clapping, finger snapping, foot stamping, and castanets. Another version is danced by two men in a friendly contest of one-upmanship.

Another 3/4-time dance that’s related to but even more widespread than the fandango, the jota originated in 18th-century Aragón (also with probable Moorish antecedents) but has distinctive regional versions across much of Spain, including Andalusia (mostly in the east), Asturias, Cantabria, Catalonia, Castile, Galicia, Murcia, Navarre, La Rioja, and Valencia. Accompanied by guitars, mandolins, and other stringed instruments, drums, and castanets, it tends to involve rapid foot movements and little jumps.

This lively jig is from Spain’s northwestern Galicia region, which has its own Portuguese-related language and Celtic-influenced culture – on display here in the steps (reminiscent of Scottish/Irish dancing) and accompanying music (played on drums and gaitas, meaning bagpipes). There are subregional types, of course, including muiñeira de Chantada and muiñeira de Lugo.

One of the higher profile Spanish dances, though not as familiar internationally, this is a classic and dramatic dance and music genre, dating back to at least the 18th century, associated with bullfighting, with versions of the music also used in military parades. On the dance floor, the man is most often said to represent a bullfighter with his characteristic movements and flourishes, though other forms are softer and more nostalgic.

Performed by a circle of alternating men and women clasping raised hands, accompanied by a band consisting of several brass instruments, a double bass, and a drum, the sardana originally hails from northern Catalonia and has been documented as far back as the 16th century and believed to have roots in the Middle Ages or possibly even older, in the era of ancient Roman Hispania. It’s mostly performed at public gatherings, and in Barcelona you can watch several sardana circles in front of the cathedral every Sunday at noon (above).

Originating as the name indicates in Seville, in the 15th century, this folk dance is flamenco-flavoured but easier to learn and not as physically demanding. And what’s more, it’s still popular, even among many younger people, and the dance you’re most likely to spot being performed by regular people in public – not only in Seville and elsewhere in Andalusia but even in other parts of Spain, in bars, parties, festivals, and other venues where traditional music is played.