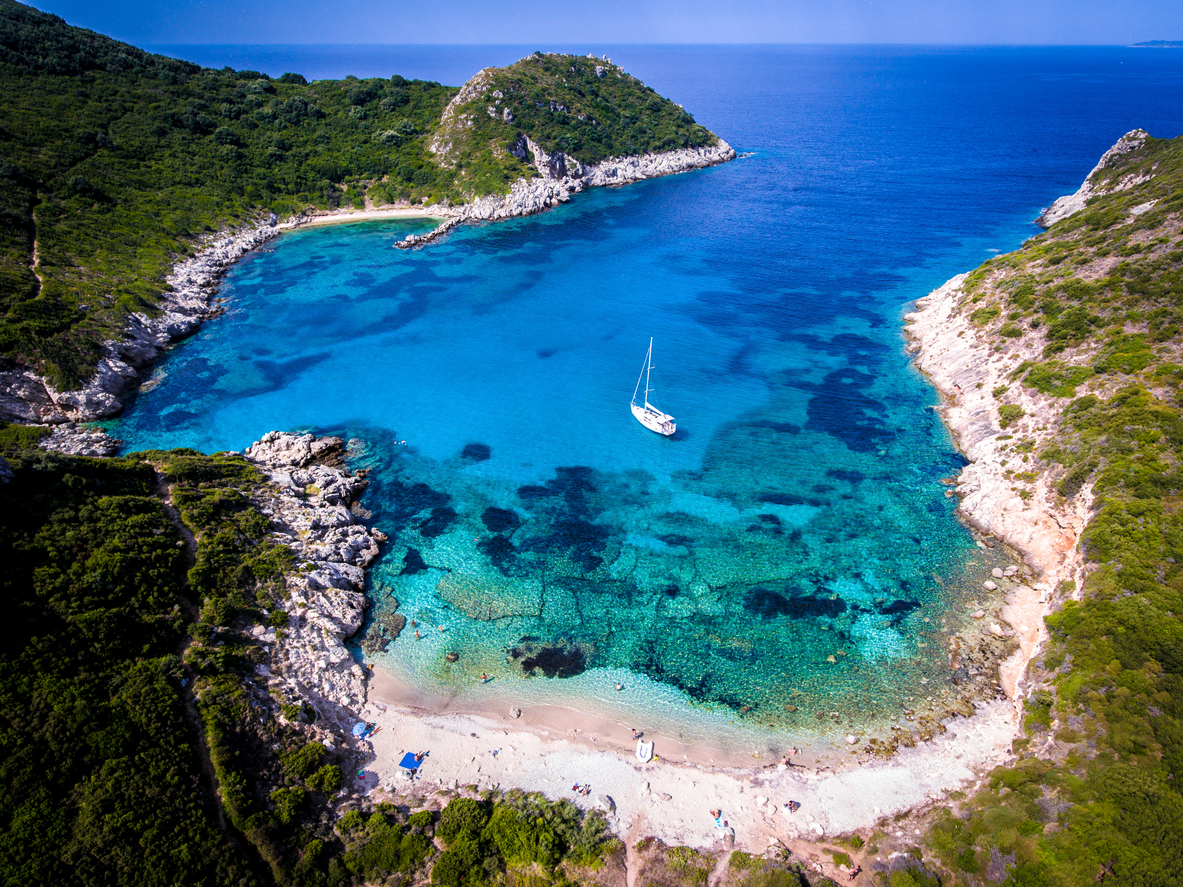 In 2019, Iberia is broadening and deepening its flight offerings around the Mediterranean Sea  in a big way, including two new Greek islands. Last month this blog took you to Crete, and today we’re taking you 876 kilometres (544 miles) northeast, to the Ionian Islands just off Greece‘s far western coast, up against the country’s border with Albania. The most famous and second largest of the seven Ionians is Kerkyra, better known to non-Greeks as Corfu, and it’s become a holiday destination beloved especially by Europeans for its dreamy beaches, virgin nature, friendly locals, dynamic nightlife, and appealing traditional life, culture, and architecture of its towns and villages. For good reason Iberia is now flying to/from here each Saturday, in August upping the frequency to three times a week.

With the first historical reference to Corfu dating back to 1300 BCE, the island figures several times in Greek mythology, beginning with the name Kerkyra deriving from the nymph Korkyra, kidnapped by the god of the sea Poseidon, who was besotted by her beauty. Its strategic location made it an object of desire throughout history, with conquests and rule by warring Greek states followed by Romans, Byzantines, Goths, the Venetian Republic (for 1386-1797 years), the French, and the British, to name just a few.  Today we can see that most of them have left some mark on the island, its culture and architecture (especially the Venetians, including the name, Corfu, by which it’s mostly known outside Greece). 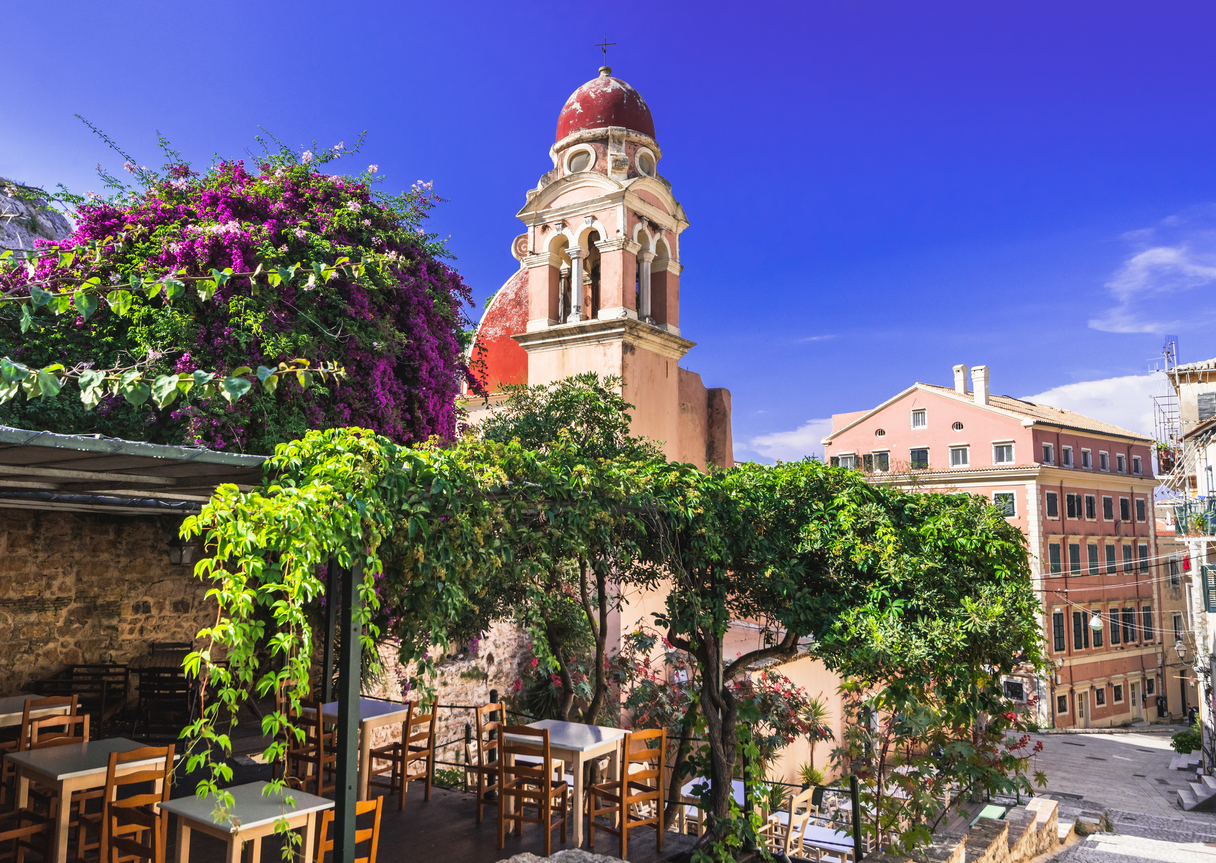 Midway on the island’s east coast, the capital Corfu Town especially reflects its Venetian past as well as its role as a bastion against the depradations of the Ottoman Empire, starting with imposing fortresses on twin hills, the Palaio Frourio, built during Byzantine rule in the 6th century, and the Neo Frourio, built under the Venetians in the 17th. In the old days, these well-preserved fortresses defended the city from invaders, but today they attract a happier form of invasion: the tourists who come for the stunning views, as well as for the exhibitions, concerts and cultural activities that take place within their walls.

It was inside these fortifications that neighbourhoods such as El Campiéllo, the oldest in the capital, grew. You will practically breathe in charm and tradition, thanks to picturesque scenes of colourful houses, laundry hanging in the sunlight and a simple way of life that you will fall in love with; strolling its steep, narrow is quite the experience. All around the historic centre you’ll come across buildings as diverse as the 16th-century Catholic Cathedral of Sts. Jacob and Christopher; the Church of Agios Spyridon, patron saint of the island, decorated with beautiful frescoes and which four times a year exhibits the saint’s mummified face; or the town hall with its distinctive Venetian style.

Another sight not to miss: the Spianáda, a gargantuan plaza at the heart of Corfu, with striking structures such as the Palace of Sts. Michael and George (built by the British), or the Listón, a street of cafés and restaurants built by the French in the style of Paris’ Rue Rivoli. To wrap up our stroll around the capital, two museums, of Byzantine and Asian art (the latter one of the top such institutions in Europe). 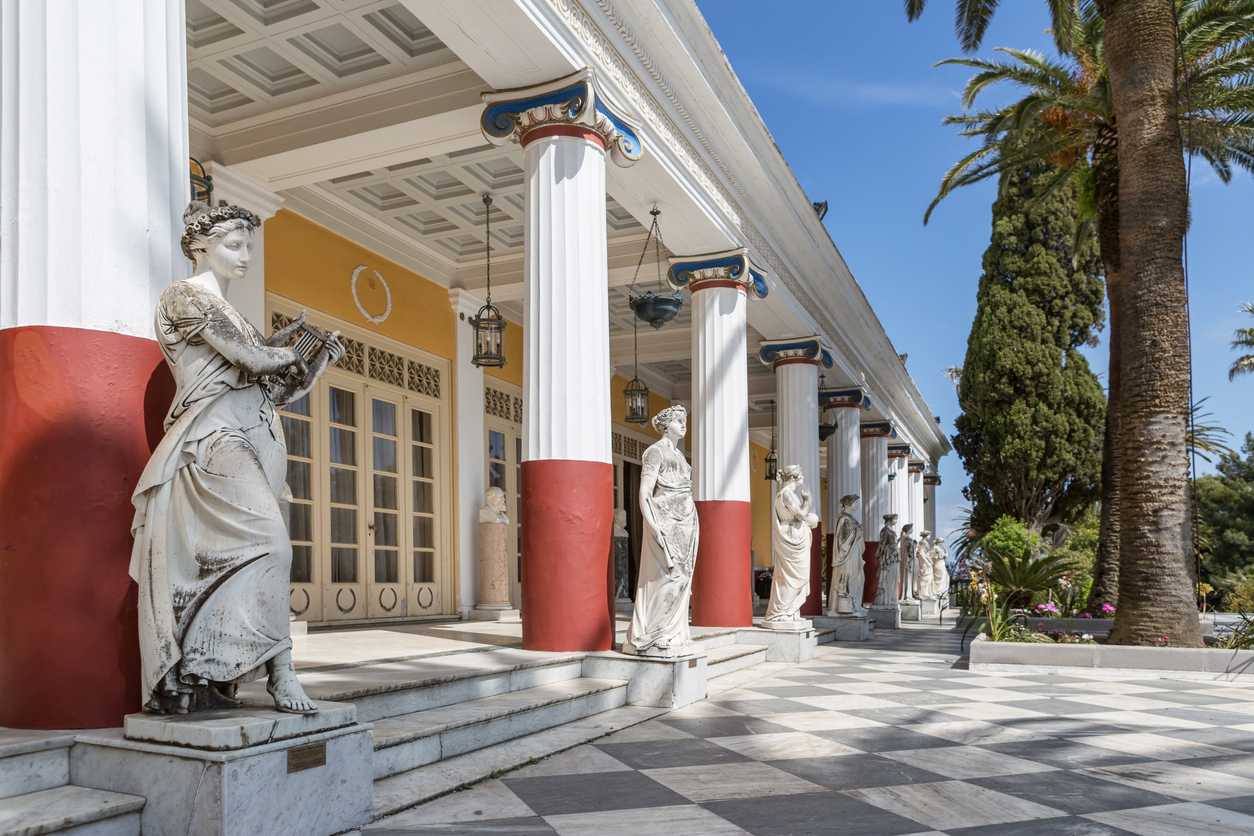 But Corfu is much more than its capital. Not too far to the south, the Church of Pantocrator and the Vlacherna Monastery, two of the most iconic spots on the island, are known for their bucolic charm, and as perfect places to savour a sunset on the horizon.

Farther south still, you’ll arrive at the Palace of Achilleion (above), built in the later 19th century for the Habsburg Empress Elisabeth as a grandiose getaway. With its columns, effigies and pompous architecture designed for a person of her stature, it’s become one of the most popular stops on the tourist circuit in Corfu, so do get there early to avoid long lines. 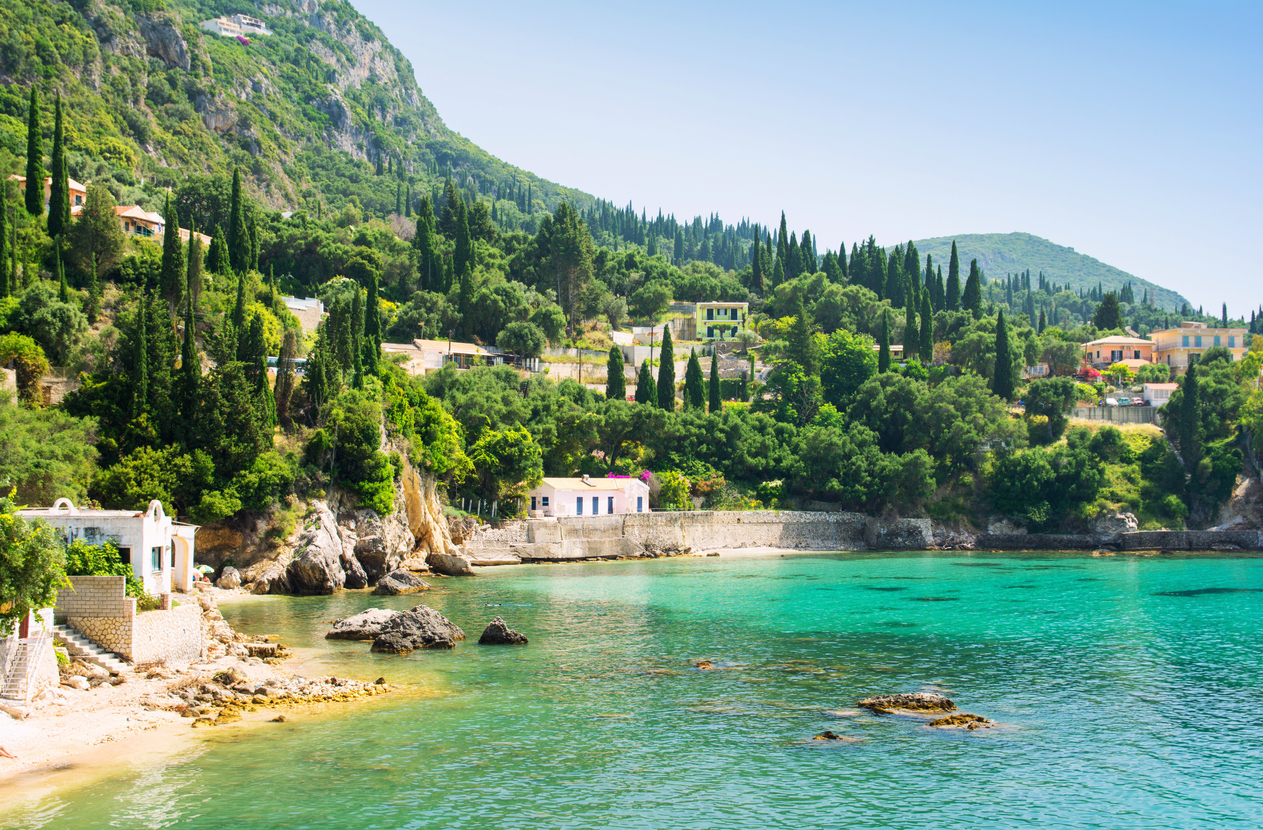 All this is on the eastern side of Corfu, so now we’ll head to the west coast and Palaiokastritsa (above). I will venture to say that it’s my favourite part of the island, a little town known for its fine-sand beaches and crystalline waters, its small coves surrounded by vegetation, and olive groves to explore and get lost in; it’s also an ideal place for discovering the incredible underwater ecosystem, whether by diving or submarine. Palaiokastritsa is equally known for its monastery high up on a hill, which you can reach on foot and from which you can see the Mediterranean in all its splendour. A must-see if ever there were one.

To wrap up the visit, head to the extreme north of the island to Sidari, one of its most famous towns, with its beautiful Venetian-style castle, its lively nightlife, and its Channel of Love, a group of caves and canals in which, so the story goes, couples who bathe together will soon marry. Would you like to try? ?