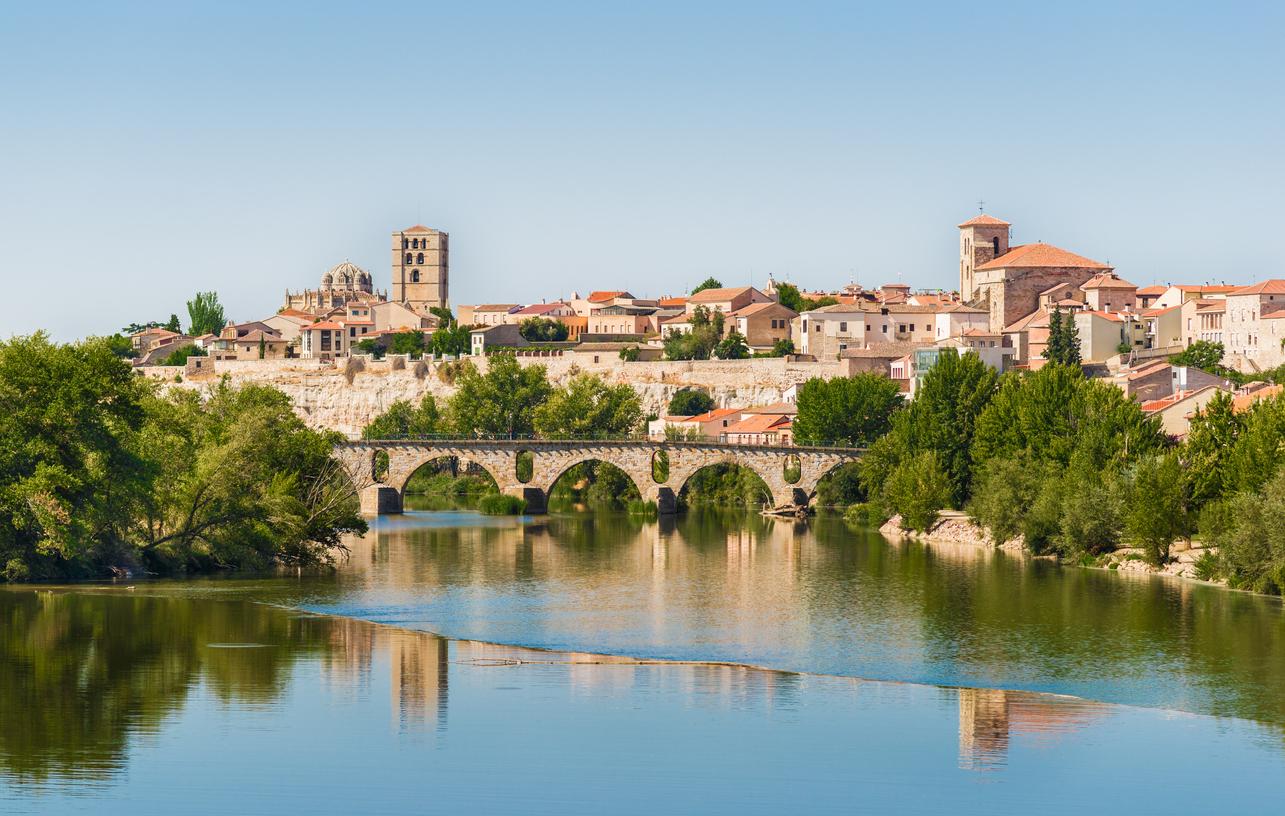 Myriad, of course, are the cities and towns of Spain which can boast an astounding mediaeval legacy. But few places are home to more of a museum of the Middle Ages – especially their earlier centuries – than the small (pop. 62,000) city of Zamora, capital of the eponymous province in the sprawling region of Castile-León, in the northwestern part of the country. Around an hour west of Valladolid and north of Salamanca, and a 90-minute train ride northwest from Madrid, this city is a remarkable UNESCO World Heritage Site that as a visitor, furthermore, you’ll most likely have nearly to yourself, since it’s well off the beaten tourist track. May I introduce you?

Sitting astride the Duero River also just east of the border with Portugal, Zamora’s walled casco viejo (old quarter) is packed with cobblestone streets such as Calle Balborraz,  lined with Romanesque architecture, above all some two dozen churches. Foremost among these, of course, is the cathedral, which in the mid-12th century took just 23 years to build – an amazingly short time for back then. Others of particular note are early-12th-century Santo Tomé and 13th-century Magdalena, La Horta, and San Claudio de Olivares. On the civil side, there’s the Palace of the Counts of Alba and Aliste, built in 1459, especially notable for its patio and staircase decorated with carvings by artists from  Lombardy, Italy. And of course the doughty stone walls and Puente de Piedra (Stone Bridge) are an inspiring sight, with various city gates including the Portillo de la Traición (Betrayal Gate), commemorating the duplicitous assassination of Castilian king Sancho II in 1072 when he and El Cid were laying siege to the city in a battle over succession to the crown of León.

There are a couple of key museums here, as well. The Museo Etnográfico de Castilla y León is a modern, seven-storey museum devoted to the traditional agrarian culture of Castile and León. And opposite the Church of Santa María la Nueva, the Museo de Semana Santa documents one of Spain’s oldest and most iconic Easter week processions, dating back to the Middle Ages, with a large collection of pasos, the religious figures carried through the streets by various cofradías (brotherhoods). In fact, if you can make it here during one of these celebrations (in March or April, depending on the date of Lent; in 2020 it’s the first week in April), it’s a truly extraordinary thing to witness.

In addition, Zamora is a great food and wine town, with local specialities mushrooms and wild trout as well as reds and whites from the vineyards of nearby Rueda and Toro. Another tasty reason to pay this atmospheric little city a visit!