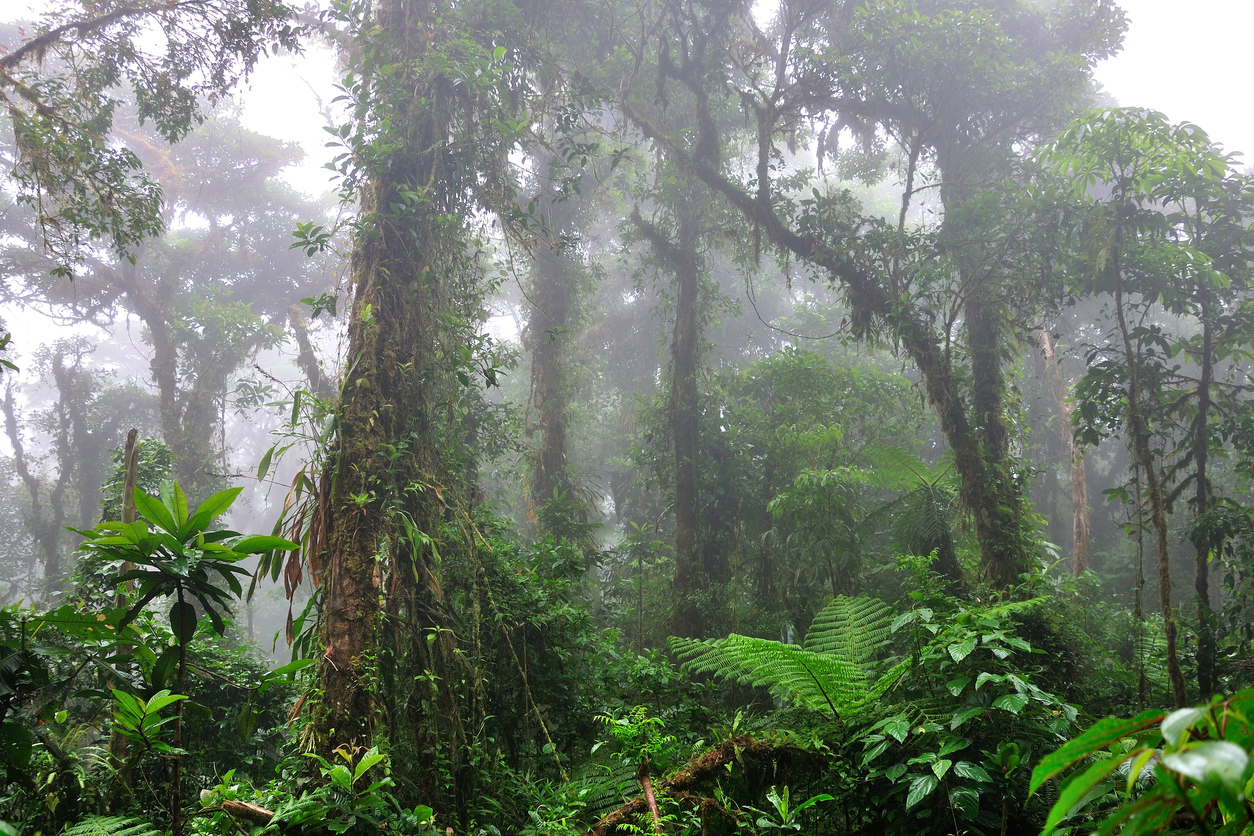 “Cloud forest“. It has such a ring of romance and mystery to it, don’t you feel? Some 1,400 metres (4,600 feet) up in the Tilarán Mountains northwest of Costa Rica‘s Central Valley including capital San José and east of its Pacific-coast beaches, three tiny communities sit on a 1,350m-high (1,450-ft.) pleateau amidst a type of woodland that comprises just one percent of the planet’s total. Cloud forests are humid but cool; characterised by frequent overcast and fog; and covered with a wild profusion of greenery including mosses, vines, lichens, and ferns large and small. With their spectacular “lost world” vibe, they’re one of nature’s otherworldly marvels, with irresistible appeal to eco- and adventure-minded visitors (these days around a quarter million each year), and lie at the centre of the attractions that make Monteverde (“Green Mountain”) one of Central America‘s top ecotourism magnets – and with good reason; when I first visited here 13 years ago while researching a Costa Rica travel guidebook, I was absolutely enchanted. 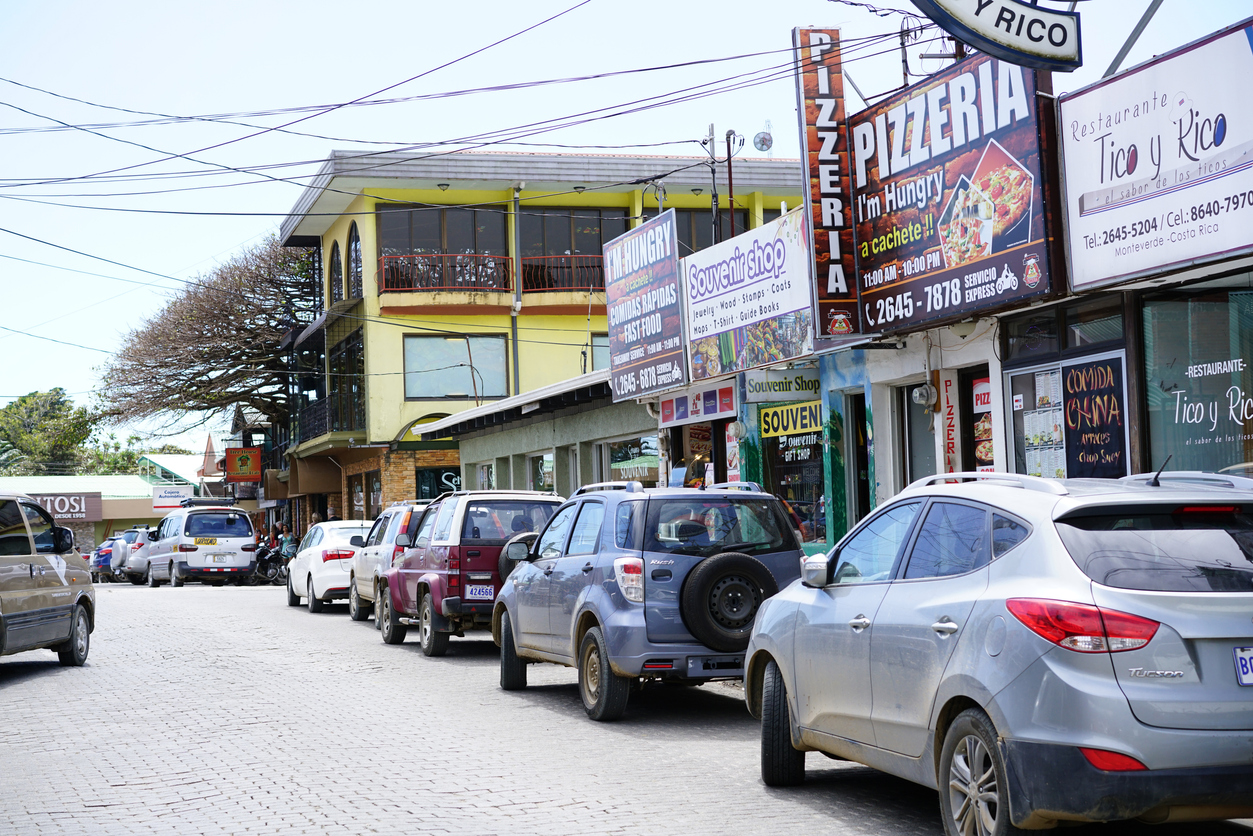 After a bumpy, occasionally hairy, but also spectacular hour-and-a-half ride on a mostly rocky dirt road up from sea level, visitors arrive in the largest village, Santa Elena, peopled by a mix of Ticos (Costa Ricans), mostly English-speaking expats, and descendents of the village’s founders: pacifist Quakers from the USA who moved here in the 1950s to avoid the Korean War draft; they were attracted to Costa Rica because it stayed neutral in world affairs and had – as is the case even today – no army (the total population of the three villages is around 8,000). So while the village itself isn’t exactly a looker (above), its mix of residents is a sometimes colourful cast of characters which I found makes local life surprisingly interesting and feeds a social/arts scene that’s far better than you’d expect for such a small and relatively tucked away community.

There are actually not one bu three bosque nuboso reserves up here. The first (est. 1973), biggest (142 square kilometres/55 sq. miles), and best is the Monteverde Biological Cloud Forest Reserve, which in addition to its singular flora is considered one of the world’s premier wildlife sanctuaries. It also boasts some 13km (8 mi.) of well maintained trails and some of Central America’s best trained and most knowledgeable guides, who’ll point out some of the roughly one hundred mammal species – many of them bats – along with 1,200 types of amphibians, 400 of birds, and more than 2,500 of plants (there’s also a field station called La Casona where you can buy food, drinks, and souvenirs, and even sleep overnight). 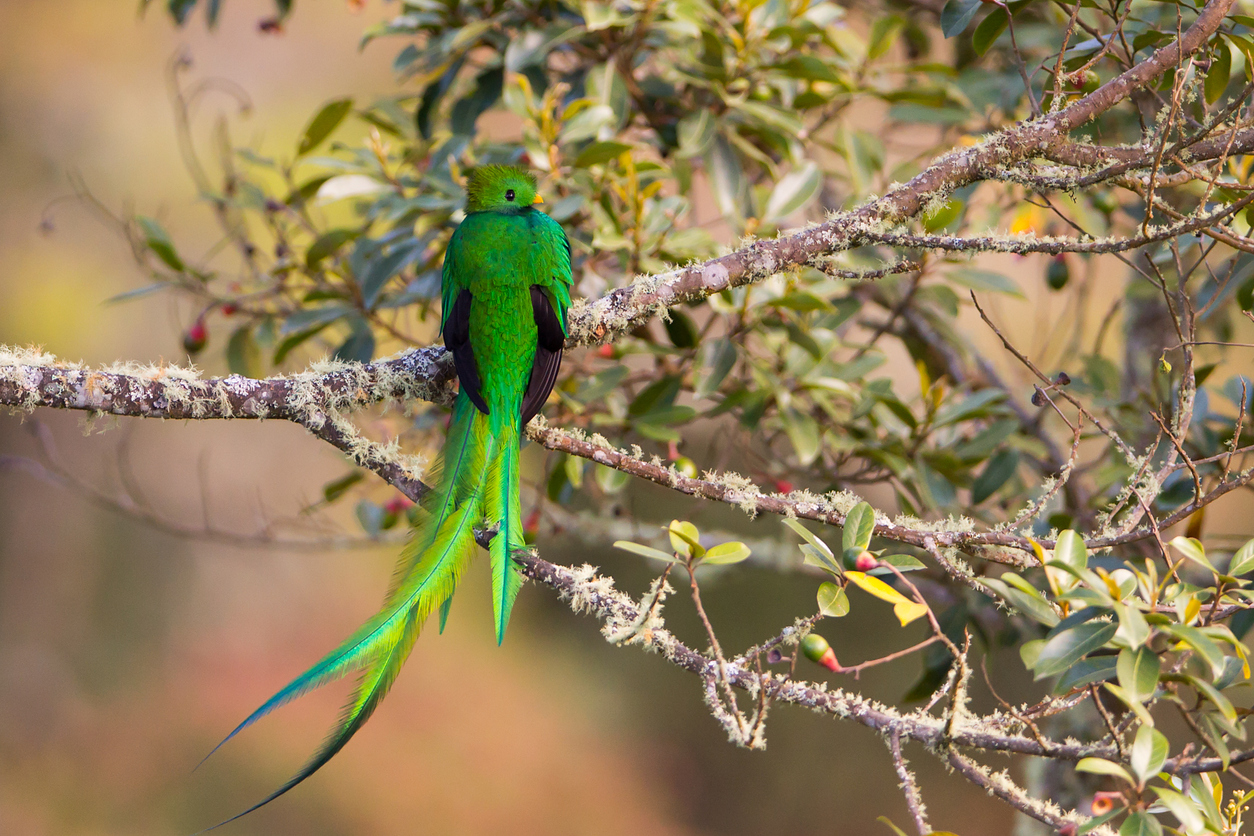 The neighbouring Santa Elena Cloud Forest Reserve is tiny – just six km² (2½ sq. mi.) – and with a similar flora/fauna mix, but smaller trees and denser ground cover, as well as a distinct local ecology including varying microclimates and three separate ecosystems thanks to its location on the moister Caribbean-facing slope rather than the drier Pacific side. Then there’s the largest of all (260 km²/100 sq. mi.), the Bosque Eterno de los Niños (Children’s Eternal Rainforest), so named because it was established by a campaign started by, of all people, a group of Swedish school kids, then expanded donations from 44 countries; a bonus to a visit to Central America’s largest private reserve is a grand canyon’s-edge view out over the Gulf of Nicoya. 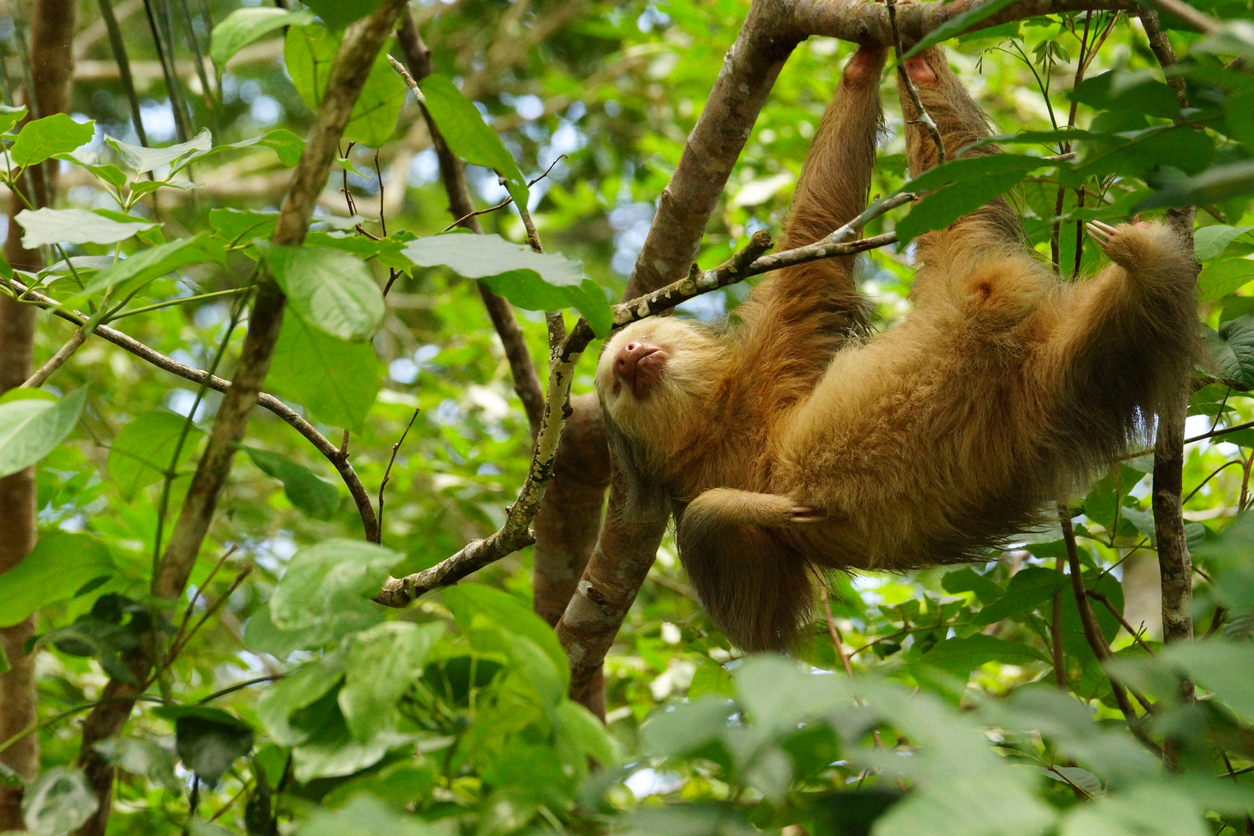 You can certainly do these hikes on your own, but I highly recommend a guide (especially by night), because otherwise many of the local critters can be tricky to spot. That’s especially true of the “holy grail” here: the mythical and elusive bird known as the resplendent quetzal, the males of which (above) are nothing short of dazzling, their emerald-green-and gold plumage accented by a glowing red underbelly and tailfeathers more than a half-metre (two ft.) long. Most of the other fauna is on the smallish side – in the air including myriad bats; butterflies such as the iridescent blue morpho (below); and lots of birds, like swallow-tailed kites, piratic flycatchers, and especially hummingbirds. On the ground it’s 161 species of snakes, frogs, and other reptiles/amphibians, along with deer, porcupine, tapir, two-toed sloth (above), wild pig, agouti, and various rodents. (By the way, Santa Elena also has spider monkeys, which Monteverde reserve doesn’t; also, during the August-through-early-February “green season” you’re more likely to spot quetzales here.)

Naturally, over the years a number of other eco and adventure attractions have sprung up to keep visitors engaged, and the main types are canopy tours with ziplines and bridges through the treetops, with three major operators being the 25-year-old Original Canopy Tour (whose founder actually invented the zipline in 1992; cool touches include climbing up an enormous hollow tree trunk to get to the first platform, and rapelling down from the last platform); Sky Adventures (above, including a series of suspension bridges and one zipline stretching 750m/2,500 ft. more than 120m/400 ft. above the ground); and Selvatura Park (which besides more ziplines and bridges than its competitors has hummingbird and butterfly gardens as well as an insect museum).

Several other local highlights worth mentioning include tours of several coffee plantations; horseback rides; an orchid garden; a ranario (frog exhibition/museum, a common attraction in Costa Rica); a herpetarium (of reptiles/amphibians – snakes, frogs/toads, lizards, turtles.); a butterfly garden, a tree-climbing park; a bungee jump; and the Sky Tram cable car. One thing that’s missing is water activities (we’re on top of a mountain, folks), but a goodly number of visitors pair Monteverde with a stop at another eco/adventure destination, Arenal, several hours north, with a great big lake as well as rivers and waterfalls galore.

Finally, you’ll also find a fairly wide range of accommodations and dining for most tastes and budgets up here. Many tend toward the economical side, especially in Santa Elena – on the order of hostels, inns, and guesthouses – but the road to the cloud forests and the other two local villages Monteverde and Cerro Plano is lined with more mid-range and upmarket lodges and resorts.

So, eco- and adventure-lovers, you’ll find that this is one mountain well worth climbing, especially if you’re curious to experience that rare environment known as a cloud forest for some thrillas in the mist. It’ll be the proverbial eco-holiday to cherish for the rest of your life.