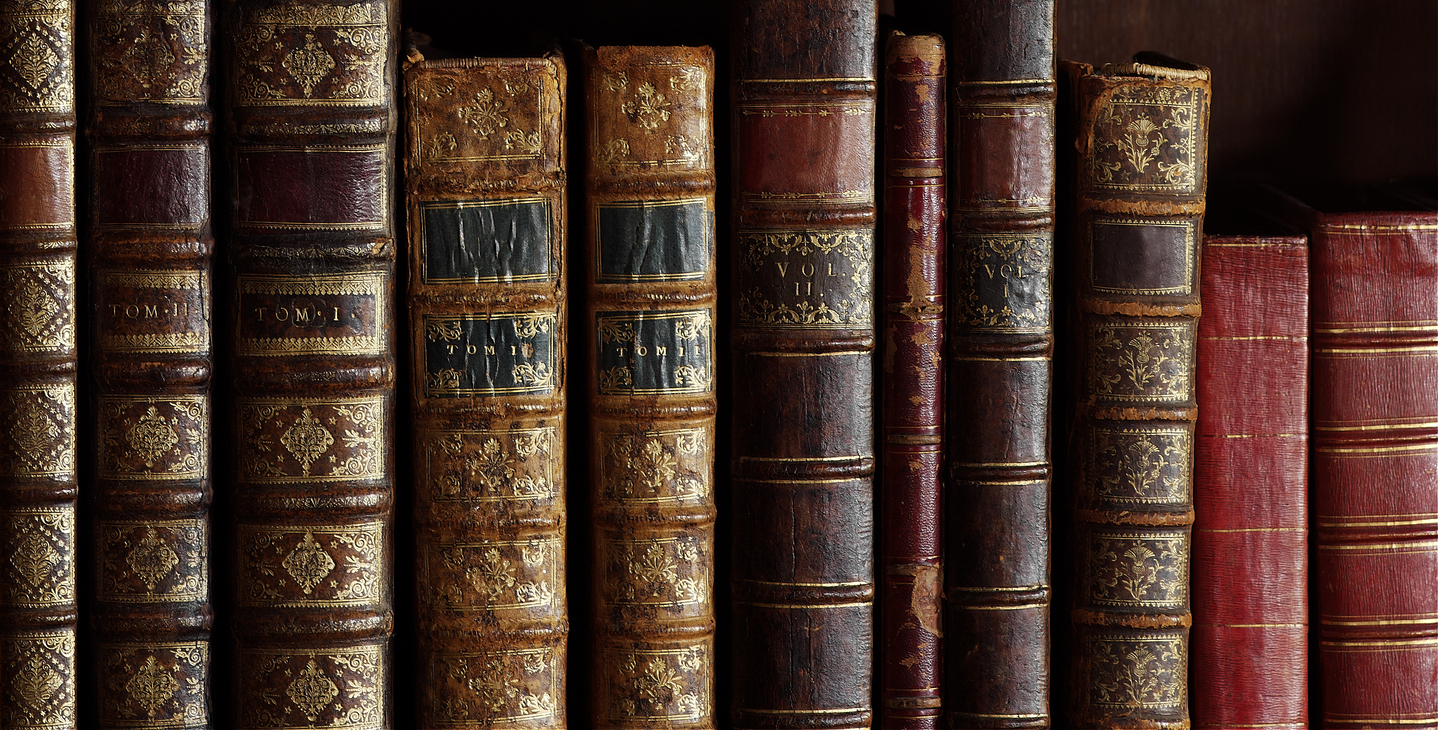 In this souped-up digital age, the concept of a physical, brick-and-mortar space – and what’s more, one meant for quiet study and contemplation – seems increasingly quaint. But for lovers of history, architecture, and culture, they still exert a powerful pull on the imagination – and the eyes (and in any case, some of the newer ones have also been upgraded and even re-imagined for our high-tech age). As a lifelong bibliophile and nerd, I always put libraries on my travel itineraries any time I can – and here are seven of the ones that blow me away the most. I know, I know, it’s a woefully incomplete list, so if you have another favourite I’ve annoyingly left out, please let us know in the comments! 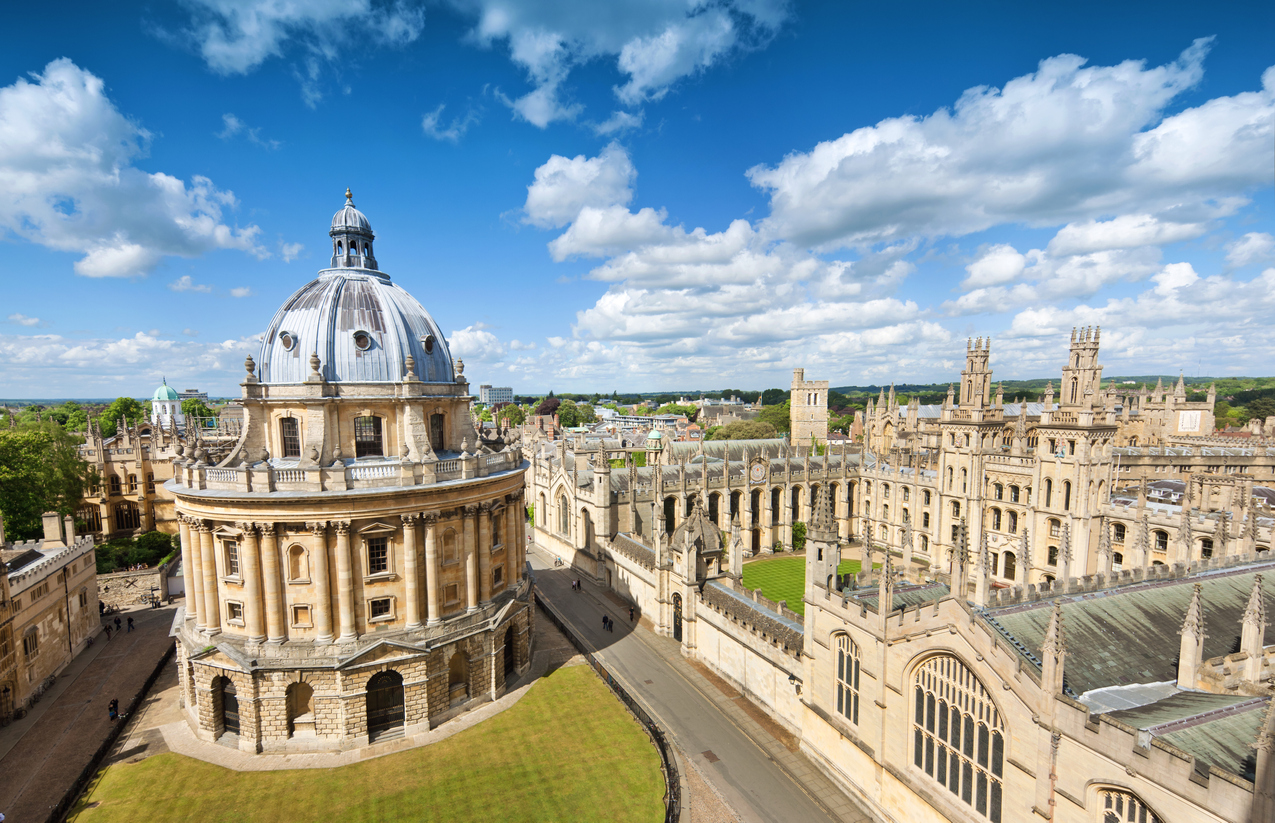 Just 90 minutes from London by road or rail, Oxford University is one of the world’s most venerable monuments to learning, and it main library – the world’s third oldest, founded in 1602 – with its most iconic component the round neoclassical Radcliffe Camera (dubbed the Rad Cam), built in the mid 18th century. The Bodleian‘s been a popular backdrop for film and TV including Brideshead Revisited, The Golden Compass, a couple of Harry Potter movies, and The Madness of King George, and as you’d expect is home to some pretty heavy lit, including the Magna Carta, the Song of Roland, a Gutenberg Bible, the first collection of Shakespeare‘s plays, and Charles Darwin‘s On the Origin of Species. 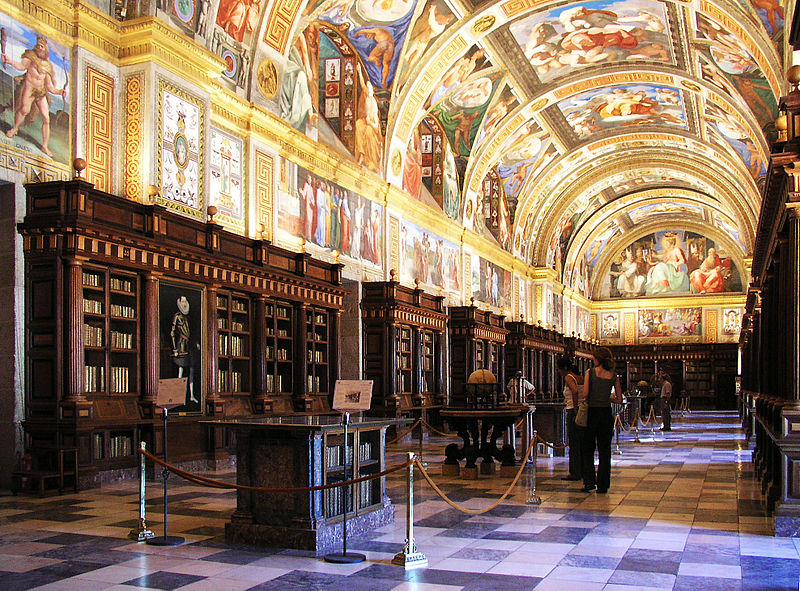 Next stop is Iberia’s home turf! One of the classic day trips from Madrid, this austere but imposing monastery complex built in the 16th century by order of King Phillip II. Its more than 4,000 rooms include a library brimming with valuable and rare manuscripts not just in Spanish but also Arabic, Greek, and Latin. What particularly catches the eye here is a set of seven spectacular frescoes depicting the arts and learning. In addition, there’s a grand basilica; a Royal Pantheon where various Spanish monarchs are interred; and galleries displaying works by the likes of El Greco, Titian, Velázquez, and Bosch. Beyond that, the town of San Lorenzo del Escorial itself has numerous streets lined with palazzos, other majestic buildings, and gardens. 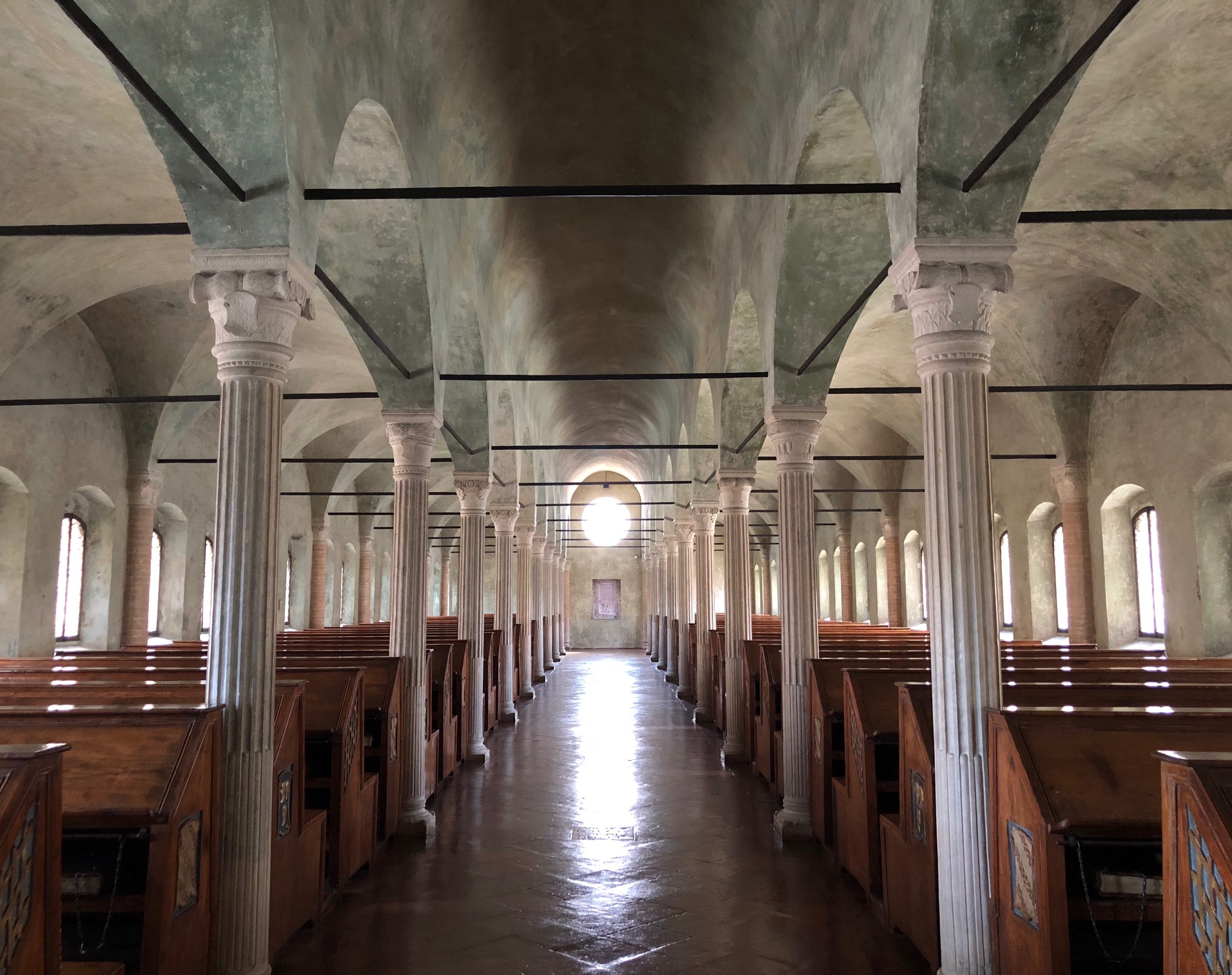 The smallest entry on this list is found in the Emilia-Romagna city of Cesena,  near Bologna, displaying the usual European selection of historic books, maps, letters, lithographs, and more, along with more modern facilities. But what makes this one extra special is the long room on the second floor, built in the mid-15th century, lit by 48 Venetian-style, crown-glass windows and lined with fluted marble columns and 58 wooden reading benches, to whose shelves are chained hundreds of illuminated ancient tomes. Besides being incredibly atmospheric, it’s especially notable for being the world’s first public library (as opposed to belonging to the Catholic Church or an aristocratic family). When I first visited – and made it the subject of my very first travel article, for Travel+Leisure in 1989 – visitors were allowed to sit at the benches and even carefully leaf through the books. Naturally, that’s no longer the case, but regular tours are still offered. 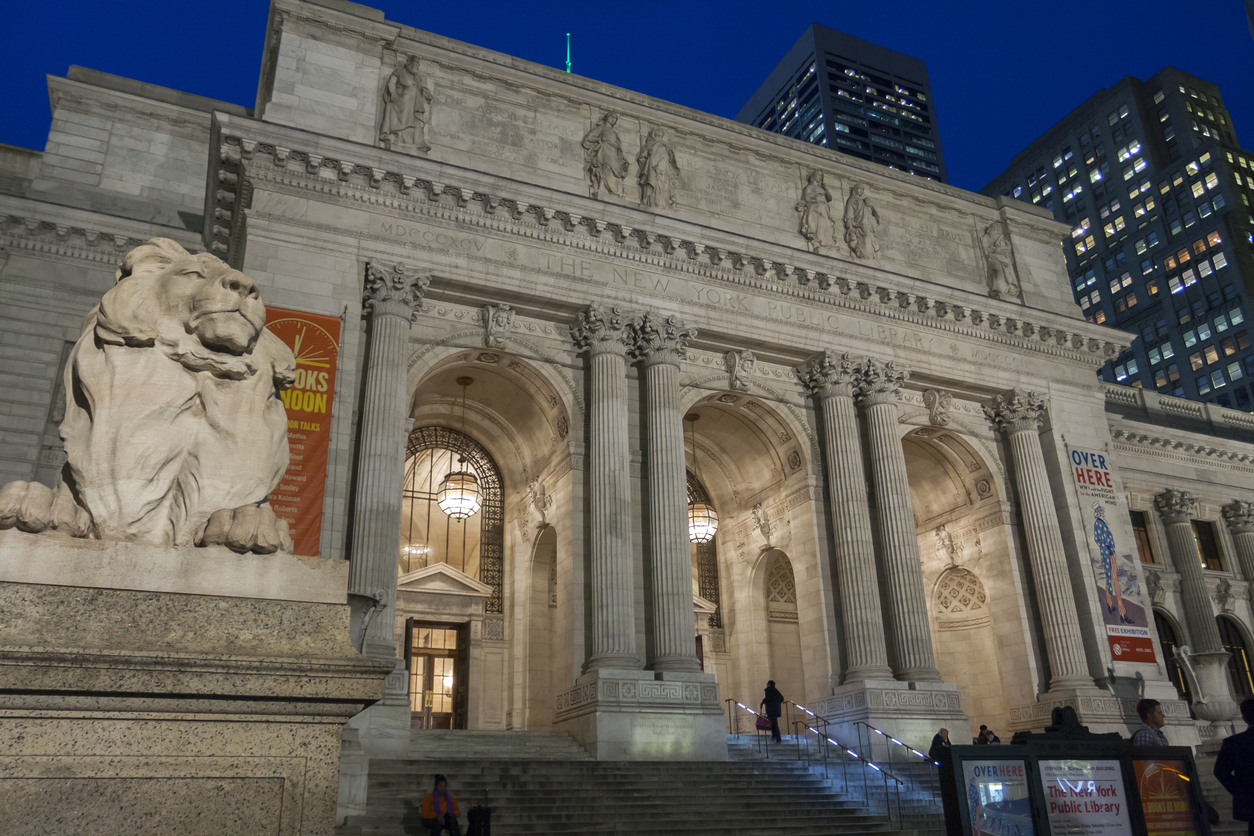 A classic of old New York – and a sentimental favourite of mine, where I’d often study and research in grad school – the majestic, 108-year-old Beaux-Arts edifice at Fifth Avenue and 42nd Street (officially called the Stephen A. Schwarzman Building, by the way) is famously guarded by its stone lions Patience and Fortitude, and impresses inside as well with the likes of its grand main reading room and elegantly appointed maps division. In addition to free guided tours, there’s always something going on here to interest the visitor, from temporary exhibitions (such as the current one marking the 50th anniversary of the Stonewall uprising that launched the gay liberation movement) and events including storytelling, readings, and talks from distinguished and sometimes world-reknowned authors. Fun fact: some of you may remember this building as the central location where survivors take refuge in the 2004 blockbuster climate-change-disaster film The Day After Tomorrow.

Books, reading, and literature are likely not be what comes to mind when you think of Rio, but this gem is well worth a stop when you’re taking in the sights of downtown. Founded by Portuguese immigrants in 1837, its limestone façade inspired by Lisbon‘s elaborately Gothic-Renaissance Jerônimos Monastery, the Real Gabinete Português de Leitura is handsome outside but downright amazing within, its main reading room not terribly large but soaring up to an iron skylight (the first of its kind in Brazil), with elegant blue-and-gold ornamentation along the walls, a striking chandelier, and a lovely monument of silver, ivory and marble celebrating the European age of discovery.

There are a number of cool modern libraries still being built out there, but one of my favourites is this cool, cantilevered bit of business designed by Dutch starchitect Rem Koolhaas. Opened in 2004, its eleven storeys of glass and steel are certainly an eyecatcher in downtown Seattle, and the experience inside is just as cool, with vivid green walls as well as reading rooms sitting in an atrium dappling them in cross-hatched sunlight. City and Puget Sound views from the tenth floor are marvelous, and the library also offers an extensive programme of literary, artistic, and even musical performances.

The Czech capital is of course packed with inordinately impressive architecture and monuments from mediaeval to modern, but the 18th-century library halls of this sprawling white monastery founded in 1143 (of an order called the Premonstratensians, aka the White Canons) rank right up there in grandeur (in this case of a Baroque flavour), especially the Theological Hall, its ceiling adorned with paintings of bibical scenes. Various other similarly decorated rooms are open to visitors, along with the church and an art gallery filled with one of central Europe’s most important collections of Gothic, Renaissance, and Baroque paintings.

Related: Buenos Aires’ Ateneo Grand Splendid May Be the World’s Most Beautiful Bookshop