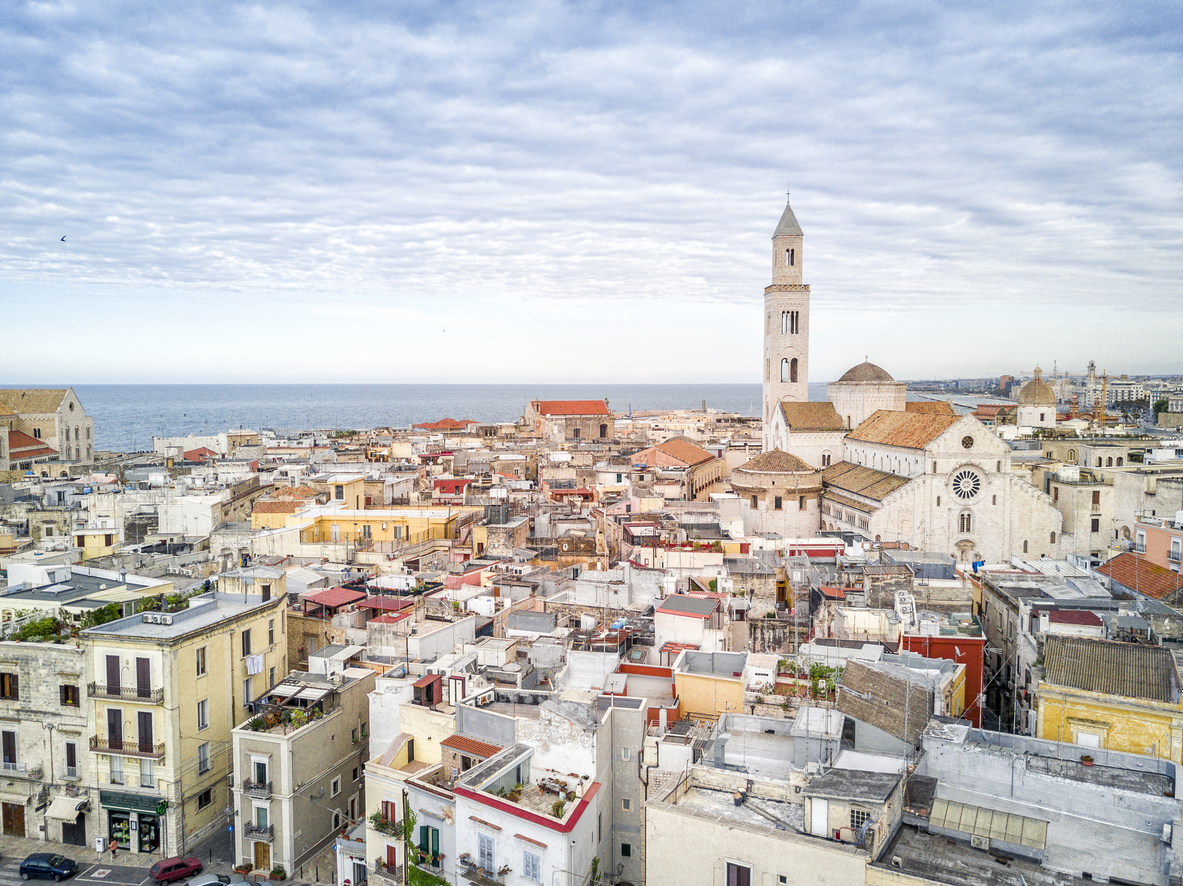 Italy is famously packed with glorious cities to explore, which means a magical spot like Bari – which would be a headliner in many other countries – here tends to be overshadowed by the likes of Rome, Florence, Venice, its fellow southern-Italian destination Naples, and even neighbouring Apulia (Puglia) region gem Lecce. But to miss out on Apulia’s capital  – astride the Adriatic Sea right on the heel of Italy’s famous boot shape – would be a shame for reasons I’m about to go into. And the reason I’m about to do so is that this, along with Genoa and Verona, is one of Iberia’s three newest destinations, with service launching later this spring. Amazing history, culture, nightlife, and delicious cuisine fed by top-notch local ingredients – it’s all here, so…incominciamo!


Located in the Apulia subregion Basilicata, with a population of a bit over 323,000, the city’s history stretches back centuries before the Romans to an Indo-European people called the Peucetii, but later, ancient Roman Barium began gaining in significance as a strategic port and nexus for the eastern Italian peninsula thanks to its 42 kilometres (26 miles) of coast, and to this day it remains an important Mediterranean port, critical to the country’s economy (on the other hand, this also means Bari is on the front line of Italy’s current controversy over illegal immigration, as many migrants land here, though they have negligible impact on the visitor experience).

The most picturesque quarter of today’s city is of course mediaeval Bari Vecchia, with its warren of narrow, winding streets and lanes, punctuated with colourful awnings and laundry hanging off balconeys, and lined with shops, bars, cafés, and restaurants. It’s all anchored by the central square, Piazza Mercantile, dominated by the onetime town hall, the Palazzo del Sedile (aka Palazzo dei Nobili) with its prominent clock tower, dating back to 1601.

Another square well worth visiting is the also 17th-century Piazza Ferrarese (named for a merchant from the northern-Italian city of Ferrara). Opposite the old port and overlooking the Augusto Imperatore seafront (with spectacular sea views) is the square, it serves as the entryway into Bari Vecchia from the sea as well as a focus of nightlife in its various bars and restaurants, and site of the Spazio Murat, a onetime market which these days hosts all manner of art and other cultural exhibitions and events.

From an architectural standpoint, the city’s top landmarks include the Romanesque San Nicola Basilica (above), consecrated at the end of the 12th century, behind whose austere white façade you’ll find a soaring interior featuring slender marble columns and unusual arches across the central nave, crowned by an elaborate ceiling of paintings and gilt; furthermore, you’ll want to pay a visit to St. Nick in the church’s highlight, its underground crypt, the resting place of the titular St. Nicholas, the 4th-century bishop of the Greek city of Myra in modern-day Turkey, whose legendary practice of gift giving gave rise to the figure of Santa Claus.

Another notable trio is the also Romanesque, late-13th-century Cathedral of San Sabino (aka the Duomo di Bari, famous for its bell tower), the Church of San Francesco della Scarpa (with a lovely cloister), and the Teatro Petruzzelli, one of Italy’s most beautiful opera houses (its interior especially is sublime), seating up to 4,000 spectators. 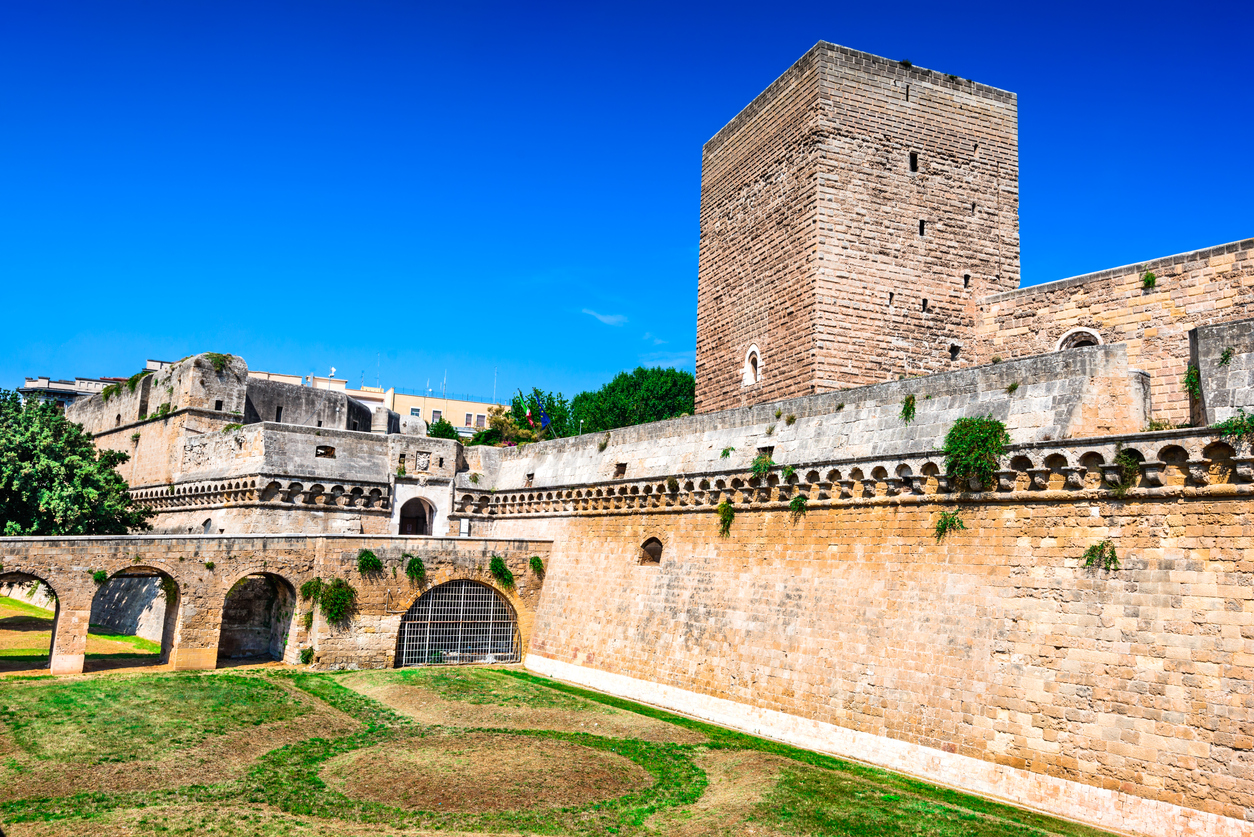 But Bari’s jewel in the crown is without a doubt its impressive Castello Normanno-Svevo, built along the old city walls around 1132 under Sicily‘s Norman king Roger II. Mostly surrounded by a moat, it’s now of course a museum – the coolest feature of which is its network of tunnels spreading out underneath the old town, which visitors can explore with the help of guides. 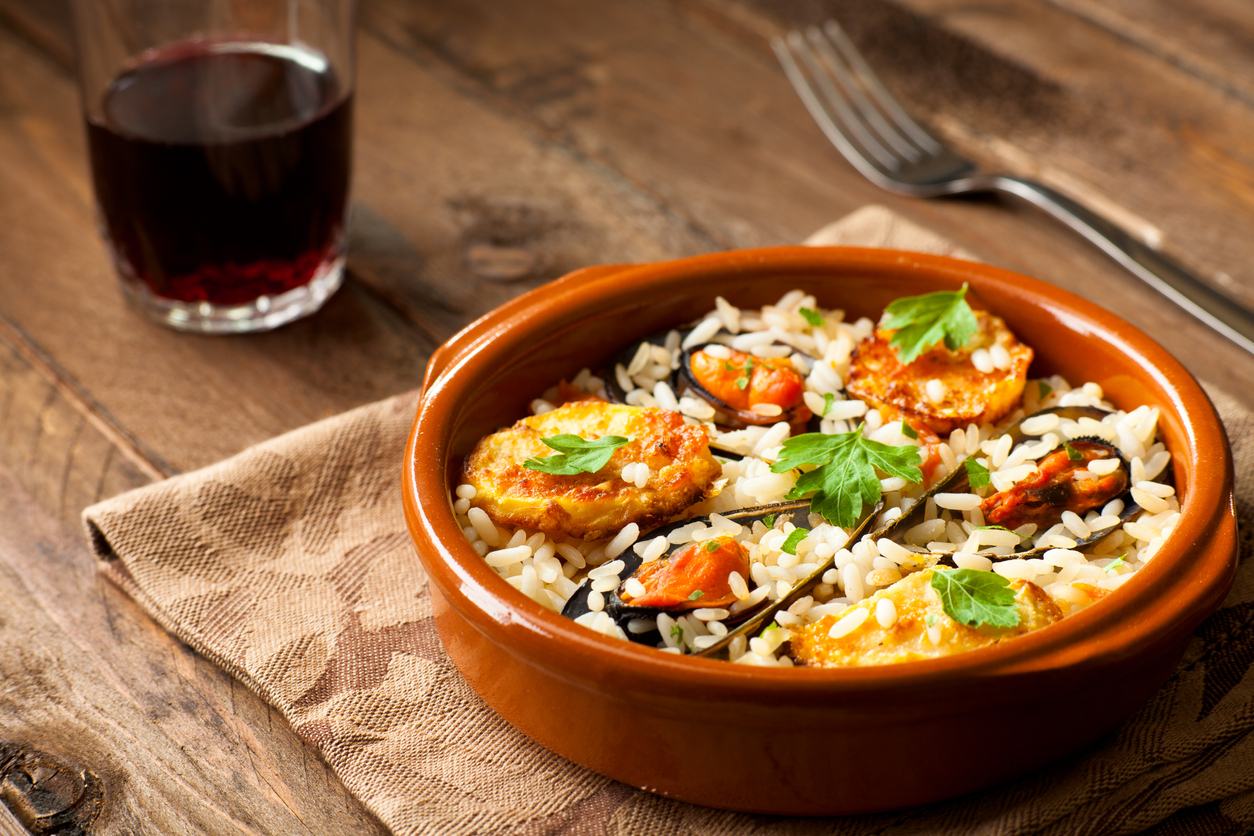 Whilst you’re engaged in all this exploration, along the way you’ll of course be partaking of the delicious local cuisine – much of it with fresh, locally sourced ingredients – and treats to look out for include tiella barese (above), a rice-based speciality served in a terracotta dish with mussels, potatoes, and tomatoes; and braciole alla barese, beef rollups stuffed with cheese, garlic, and parsely, simmered in tomato sauce. The local pasta includes orecchiette con cime di rapa (with turnip tops) and cavatelli ai frutti di mare (with shellfish), while the calzone a la barese is a yummy version of the international favourite with green olives, egg, tomato, pecorino cheese, and lots of onion. Then to cap it all off on the sweet side, a nice zeppole (cream or custard-topped fritter) or bocconotti (originally a Christmas-season treat), mini-cupcake-style biscuits stuffed with jam, honey, or chocolate.

Finally, before or after Bari, be sure to make time for a visit to the city of Matera, less than an hour away. Yes, it’s one of 2019’s two European Capitals of Culture, but what really makes it unique is its mediaeval, UNESCO World Heritage quarter I Sassi, consisting of homes, shops, and churches hewn out of a tufa-rock hillside.