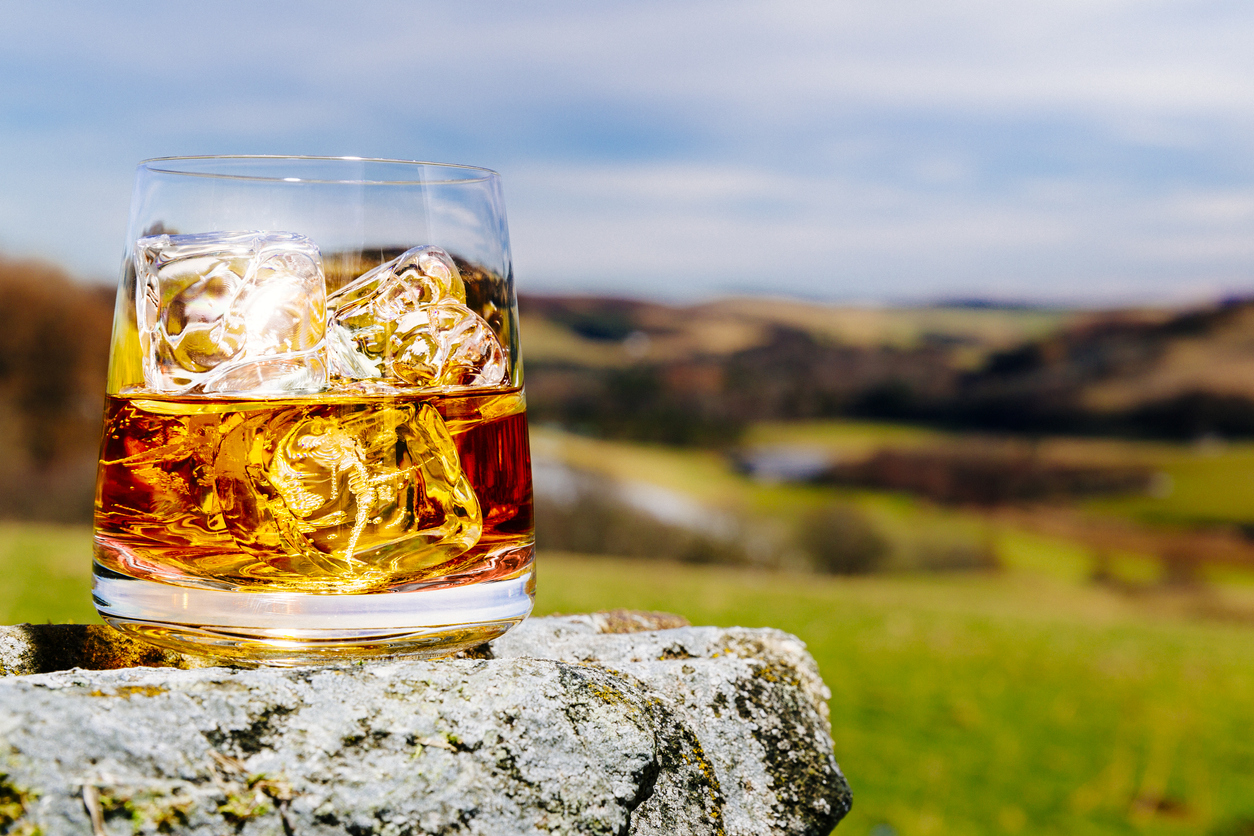 With his dying words, Humphrey Bogart famously expressed a profound regret: “I should never have switched from scotch to martinis.” Fittingly, the word whisky is derived from the Gaelic uisge (“water of life”) – presumably for its medicinal and warming properties.

While I’ll never regret a perfect ‘tini, I’ve long been enamored of all things British, from Downing Street to Downton Abbey. Sipping a single malt conjures iconic images of bogs and bagpipes, spaniels and shooting parties, liveried footmen and libraries redolent of leather: an all-but-vanished era of privilege.

What better pilgrimage, then, on International Whisky Day but to follow one of Scotland’s legendary whisky trails, drinking in the complex production process up-close and personal? At last count, 128 active distilleries blanket the country’s five far-flung official whisky-producing regions: Speyside (home to over half), Campbeltown, Islay, Lowland, and Highland (a case – or cask – can be made for distinguishing the Hebrides Islands from the last). Whisky is produced even in the remote windswept northern Orkney and Shetland Isles. The industry is booming: 13 new distilleries opened in the past two years with another half dozen on the horizon. 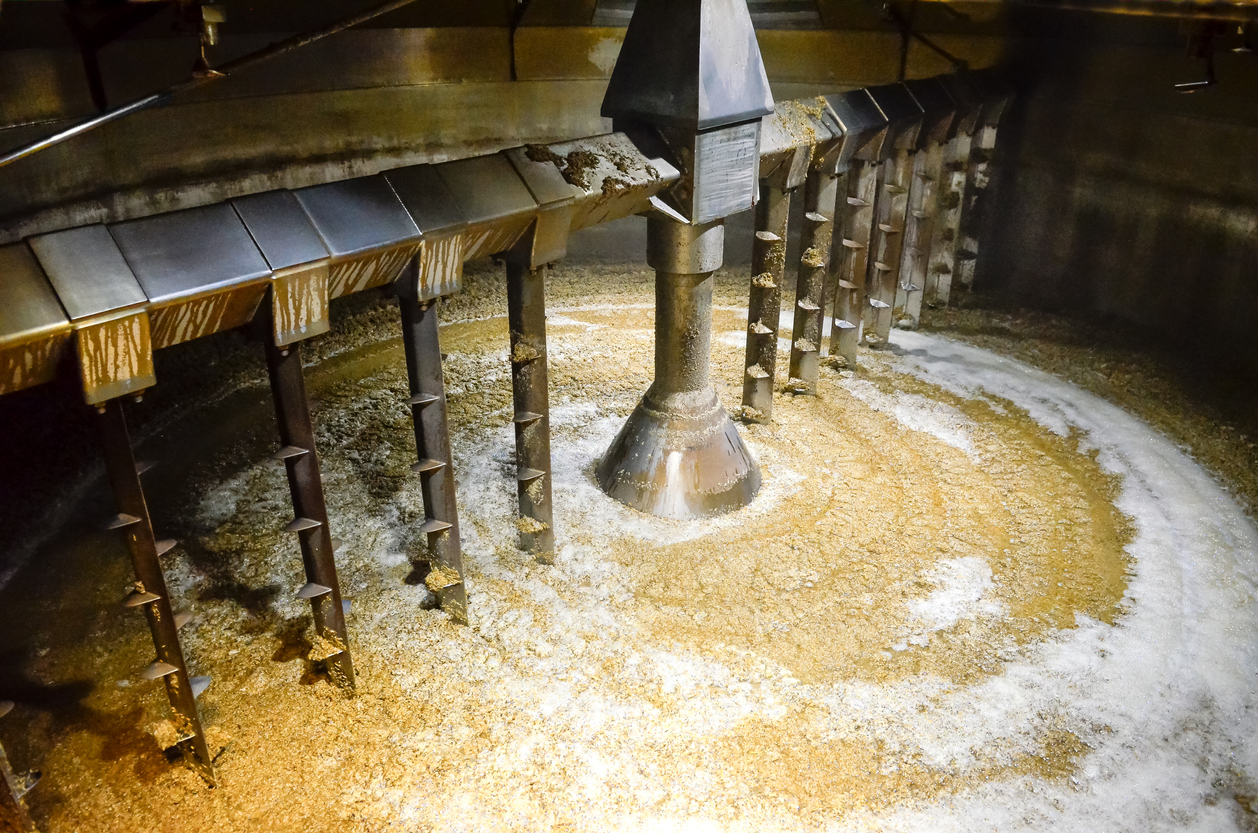 Most distillery tours explain the six primary steps in the technical process, whether for single malts or blends: malting, drying, mashing, fermentation, distillation, and maturation. Nearly every distillery offers several “experiences”, accommodating both amateurs and aficionados, ranging in price from £6 to £155. At the end, you can purchase whisky and paraphernalia at the shop, even personalise bottles and/or fill direct from the cask. 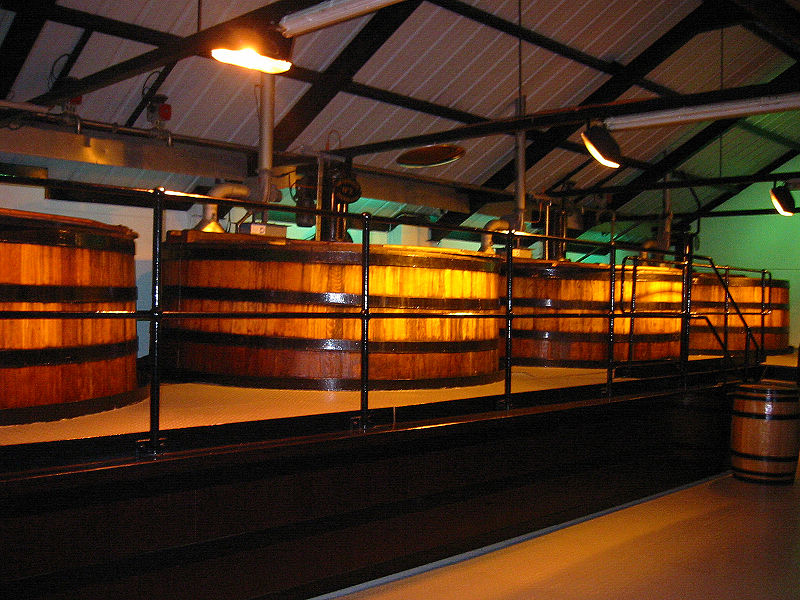 But I first wet my whistle and feet using Glasgow as a base for informal day trips into the Lowland and Highland areas. The nearest Lowland option sits centre-city between the stunning Riverside Museum and the SEC on the banks of the River Clyde, Glasgow’s first dedicated single malt distillery in over a century. Refurbished at a cost of £10.5 million from the iconic Pumphouse on the Queen’s Dock, Clydeside opened in 2017. Savor the classic lighter, fruitier Highland stylings in the café, affording dramatic river views. Then venture further along the Clyde just over the county line, a mere 11 minutes from the city centre via road or train, to 187-year-old Auchentoshan (above), where the “whiskies are so soft and smooth they whisper like a lover,” as one sighing fan(atic) told me. The tours, £10 and up, showcase its renowned triple distillation (most whiskies undergo only two); the top end (£55) includes a master class in crafting high-strength and archive whiskies and a sampling straight from the cask.

The granddaddy of the established routes, the Malt Whisky Trail, slices through the Moray Speyside region – noted for lighter, grassier whiskies – from the Grampian Mountains through beaches and forests, covering eight distilleries (seven still operational, including the world’s two best-selling single malts) plus the Speyside Cooperage, where dexterous coopers refit barrels by hand. Among the highlights is The Glenlivet, “the one that started them all.” It was the first to apply for a license, in 1824, rather than smuggle spirits illegally, while trademarking the brand and cajoling the crown’s endorsement. The three tours run from £12.50 to £65 – including drams, of course.

Rival Glenfiddich (above), still family-run, remains the only distillery to trace the entire process, except bottling, from barley to bar. The 90-minute “Explorers” tour (£10, including three samples) is a comparative bargain, while the £50 “Glenfiddich Solera: Deconstructed” describes their unusual use of the solera method of maturation, and features four cask tastings.

Strathisla, birthplace of Chivas Regal, is Scotland’s oldest continuously operating distillery (since 1786). Scenically set on the banks of the Isla River, this distillery is also arguably the country’s most atmospheric, replete with the inimitable Doig ventilators perched pagoda-like atop the malt buildings. Hour-long “Traditional” tours (£15) offer four samples; longer, more in-depth options include a Chivas-blending experience allowing you to craft your own wee bottling (£60).

Picturesquely perched in the Romach foothills, the enchanting family-owned Benromach is the region’s smallest distillery, noteworthy for the delicate hint of smoke in its expressions. The four tours range from just £6 for the “Classic” to £125 for “Meet the Maker”, where the distillery team guides you through recreating the 10-Year-Old from hand-drawn cask samples (you’ll take home an exclusive bottling).

Not on the “official” Speyside trail but a must-see is the vast new The Macallan Distillery and Visitor Experience, which debuted in June 2018 above the River Spey; a video documents the four-year, £140-million process. The literally groundbreaking design involved excavating the undulating verdant hillside, then piling new mounds atop the finished construction and sowing the beamed roof with 28 varieties of indigenous plants. The interior is equally innovative, an immersive edu-tainment complex. A three-story double-sided glass brand wall showcases 843 historic Macallan expressions. Everything’s efficient, eco-centric, contemporary, and computerised; just two distillers run the mostly automated line, snaking around three pods of 12 stills arrayed in a circle like a 21st-century answer to Stonehenge. Guests crawl along catwalks overlooking the stills and fermentation vats, with six stops providing theatrical pop-up displays. The “Six Pillar Tours” (£15pp, nine daily) are limited to 12 people each: Book well in advance. Eat@TheMacallan offers top-hole Scottish produce, courtesy of the Roca brothers, whose El Celler de Can Roca in Girona, Spain twice topped the World’s 50 Best Restaurants list.

The newly minted, wildly photogenic Hebridean Whisky Trail launched last August, highlighting the region’s rich, sweet yet spicy and smoky single malts. Travel via road and ferry to four distilleries on three of the remote Hebrides: the isles of Skye, Raasay, and Harris. Talisker (above), built in 1830, enjoys glorious vistas of the Cuillin Mountains looming over Loch Harport. The three tours run from 45 minutes (£10) to two hours (£40). Meanwhile, Torabhaig, overlooking the dramatic Sound of Sleath and wilderness of the Knoydart Peninsula, opened in 2017 and offers just a standard £10 tour/tasting for now.

The final Hebridean Trail stop is the Harris Distillery, which debuted in 2015. It’s currently celebrated for its gin (which many distillers craft while they’re waiting three-plus years for their scotch to mature). With luck, they’ll have unveiled their eagerly anticipated The Hearach single malt by the time you visit. If not, the gin – redolent of citrus, coriander, florals, pine – makes a fine substitute for a picnic on the island’s gorgeous beaches. You can try the gin and preview the whisky on the £10 tour, plus browse the distillery’s own Harris Tweed line, slated to premiere by 2020. 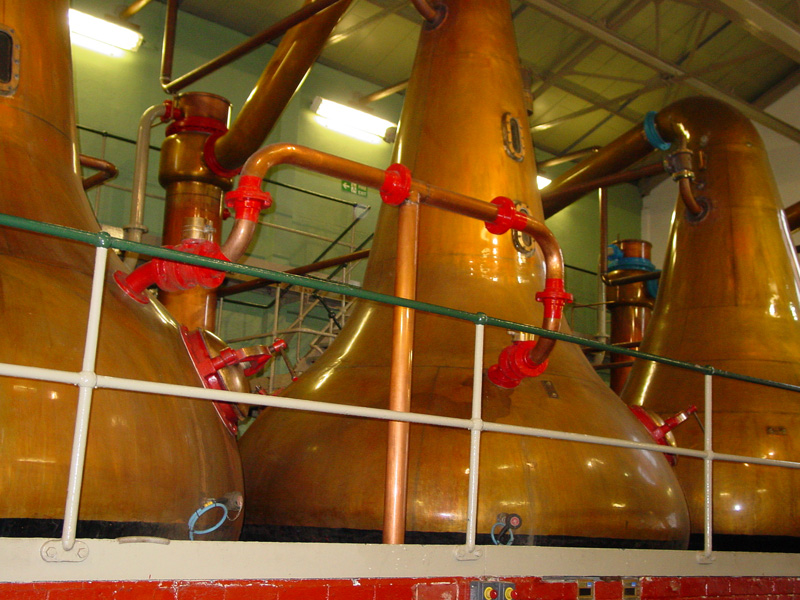 For many, however, the isle of Islay off Scotland’s west coast is the spiritual home of the spirit, hailed and hallowed for its peaty character – due to the high phenol content, up to 55 ppm (phenol parts per million). Its wild, craggy terrain is home to nine active distilleries, including the recently opened Ardnahoe. You can easily visit them all on this wee patch (just 620 square kilometres/239 sq. miles); flights depart Glasgow Airport daily.

Founded in 1825, Laphroaig’s tours highlight the hardy history of distilling – and living – on a harsh islandscape. You can sample three expressions during the £10 “Experience”, but the £110 “Water to Whisky” option includes a distillery tour, picnic lunch, peat cutting, visiting the water source, and a cask selection. Just as old and storied, fierce rival Lagavulin, famed for its unusual pear-shape stills (above), counters with an equally Instagram-worthy coastal setting and exceptionally priced options, from £6 to £35. Last but not least of the Big Three in Islay’s Port Ellen is Ardbeg, whose distillation style imparts lighter, subtler, fruitier tones (despite its 55 ppm). The £20 tour is a bargain, including five tastes, including one limited expression. Finish off the experience with a meal at its Old Kiln Cafe, even stay onsite at Seaview Cottage.

Whether surveying the wild Hebridean tangle of surf and rock or yielding for sheep in a Highland glen, you’ll appreciate Bogie’s last words in a new light!