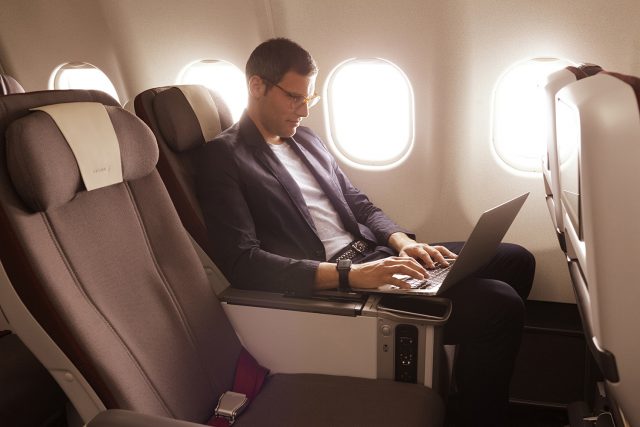 “Wireless Fidelity” is of course now firmly a part of daily life for many of us – and in recent years has also been inevitably extending into the sky as part of airline flights, for several years now including our own, on long-haul routes. And now we’re preparing to install it on our short-haul Airbus A320s, as well. For the occasion, allow us to share with you some interesting details about how inflight WiFi works.

For starters, an aircraft is essentially a Faraday cage, which blocks external electromagnetic fields by distributing the electric charges within the chassis’ conducting material to be distributed so that they cancel the field’s effect inside, thus for example protecting it from lightning strikes as well as shielding its various systems for navigation, communication – and Internet.

Oftentimes the installations that permit inflight WiFi are performed at the factory during the construction of the aircraft itself – accompanied of course by all the necessary technical and legal procedures and certifications. But in other cases, as with the A320s, it’s a matter of installing them in planes which are already in service, during one of their periodic scheduled upgrades.

The connection with land-based servers is accomplished via satellite (thus allowing seamless connectivity also whilst flying above oceans and remote areas where phone service doesn’t exist). WiFi on Iberia’s current long-haul flights have two service providers. On our Airbus A340-600‘s and A330-300‘s it’s SITAOnAir (originally a joint venture with Airbus), using Immarsat SwiftBroadband (L band, with a range of frequencies between 1.5 y 2.9 gigaherz); in the case of the A330-300’s this was installed during construction, while it was added as an upgrade to the A340-600’s.  And more recently, in the new Tourist Premium class this system was swapped out for the Gogo 2Ku system, which allows even faster connectivity. 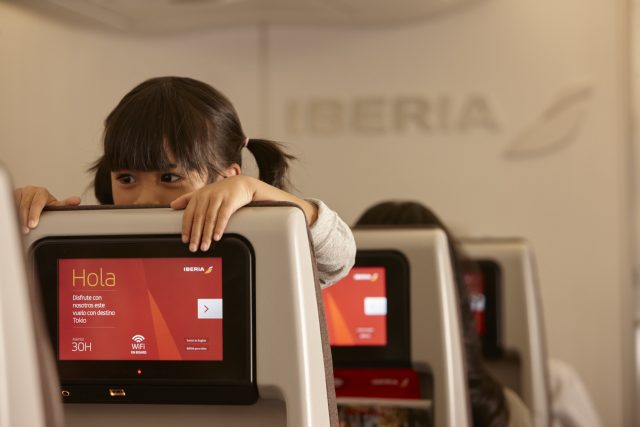 In the A3302-200‘s and A350-900‘s the Panasonic company was chosen to provide both inflight WiFi and the onboard entertainment system, which operates on the Ku band (12-18 GHz), allowing both faster speed and smaller/lighter, factory-installed antennas than L band. In addition, Panasonic operates its own communications-satellite network providing worldwide coverage.

In 2017, Iberia’s parent company IAG selected Immarsat and Deutsche Telekom para to provide this service, operating with two technologies to provide global coverage – via land-based antennas and Immarsat via satellite. Thus each aircraft is equipped with three antennas – two in the lower section connecting to the terrestrial antennas and the third connecting to an S-band satellite.

The imminent installation of the necessary equipment in our single-aisle (short-haul) aircraft – along with the various antennas; two or three WAPs (wireless access points), depending on the model; and servers – will be carried out by our maintenance division, taking about one week per plane. These WAPs, by the way, which work much like the router we all have at home, are hidden in the ceiling panels of the cabin, thus avoiding the above-mentioned “Faraday cage” effect of the fuselage.

An interesting bit of history, by the way: the first service of this type that also operated over water was introduced back in 2001 by Boeing, and entered into commercial use in 2004. But even as some airlines started adopting it, Boeing announced in 2006 that it was seeking to sell or discontinue the service; the half-million-dollar price tag on these modifications turned off other airlines, and the nail in the coffin at the time proved to be the travel slump in the wake of the traumatic terrorist attacks of September 11, 2001, which led most of the U.S. carriers which had signed up for this service to pull out. Boeing announced its discontinuation noting that “the market for this service has not materialised as hoped”.  Little more than a decade later, all that seems just a distant memory.