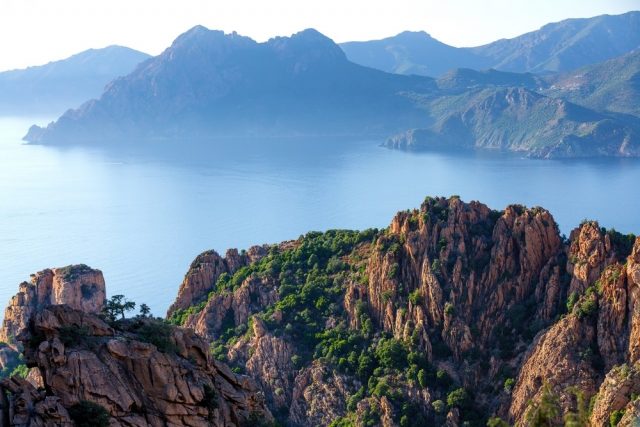 Not all that many non-Europeans are familiar with the largest island off mainland France and just north of Sardinia, but Corsica (pop. 330,000) in recent decades has become a favoured holiday destination – not just for many French people but other Europeans such as Italians and Brits – especially thanks to its nearly 200 lovely beaches along some thousand kilometres (621 miles) of gorgeous coastline. And whilst there, many visitors discover the other fascinating attractions of a highly charismatic isle with its own distinctive language and culture. And now that Iberia is launching service to the island’s second largest city Bastia, allow me to take you on a little introductory tour.

With a history of human occupation documented as far back as 11,000 years ago, Corsica became part of the Roman Empire and subsequently was controlled by various domains of pre-unification Italy, including Lombardy and Pisa, but especially Tuscany and Genoa. This history – including a good deal of immigration at one point from Tuscany – left it was a strongly Italian-flavoured language and culture even after its conquest by France in 1769. In the centuries since, French language and culture has permeated the island, and the native Corsu language (derived from mediaeval Tuscan) is now spoken by just half of the population – though there is strong local support for increased autonomy from the French state (and among a minority, even full independence, even to the point of some separatist terrorism in the 1970s). These days the regional-party-dominated Corsican Assembly enjoys uniquely broad powers of autonomy. 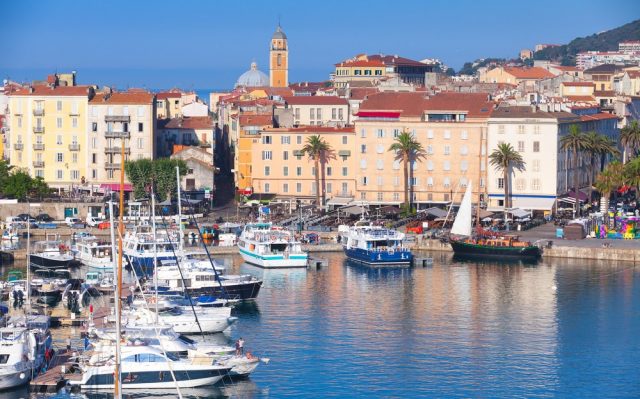 On the west coast, capital Ajaccio (above, pop. 69,000) dates from classical antiquity but much of its character derives from 19th-century France of Emperor Napoleon Bonaparte, the restored monarchy, and the Third Republic. With a Côte d’Azur vibe and loomed over by the picturesque 16th-century citadel (not open to the public because it is still used by the French military), the old town is anchored by Place Maréchal-Foch, with its palm trees and centred on a fountain featuring a statue of Napoleon (or as he was known when he was born in this city in 1769, Nabulione Buonaparte). You’ll see a lot here of the world’s most famous Corsican and his extended family, starting with his birth house, the Maison Bonaparte. The Palais Fresch Museum of Fine Art was built by the emperor’s uncle, a Catholic cardinal, and is home to some amazing French and Italian Renaissance masterworks, among others. Ajaccio’s Hôtel de Ville (city hall) has a grand salon featuring portraits and frescoes depicting the family and Napoleonic history. And even the 16th-century Baroque Cathedral of Our Lady of the Assumption is marked with a high altar donated by sister Eliza Napoleon (above it hangs The Triumph of Religion by 17th-century master Eugène Delacroix). 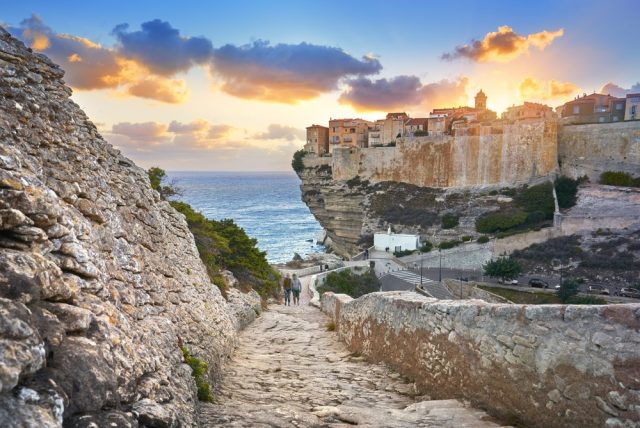 There are a number of other charming towns scattered along the coast as well, most notably:

Near the northern tip, Iberia’s new gateway Bastia has an attractive port with the 14th-century old town and citadel above, and gracious 19th-century boulevards and plazas radiating from it. The narrow streets are great for wandering; the port lovely for enjoying a drink or meal in the afternoon and evening; and t the citadel you’ll find a pair of fine old churches and the Governors’ Palace, now home to the city museum.

Bonifacio (above) is dramatically perched on limestone cliffs at Corsica’s southern tip, where top sites include the 13th-century L’Entendard Bastion (now home to a museum); the 12th-century Sainte-Marie Majeure Church; and the spectacular blue-violet Dragon Grottoes.

Over on the northwest coast, Calvi is known for its crescent-shaped bay and beach, and is dominated by its own citadel, built in the 15th century, its cobblestone old quarter home to 16th-century St-Jean-Baptiste (no longer officially a cathedral), as well as a military museum and the Museum of Corsican Ethnography. The harbour, meanwhile, is these days dominated by fancy yachts as well as smart restaurants and cafés.

A half hour up the coast, L’Île Rousse was founded in the mid-18th century, and most of its architecture is from that period and the early 19th century. Its narrow streets mostly straight instead of winding, it’s become something of a fashionable tourist mecca, but doesn’t have much in the way of “sights” except for a pair of churches in the town centre.

Porto-Vecchio is down on the southeast coast, a half hour north of Bonifacio. Another Genoese settlement, established in 1539, this stylish resort town fancies itself Corsica’s St-Tropez. The quaint, cobblestone Upper Town sports several old bastions, gates, and churches, whilst down below the Place de la République becomes a chic social centre during high season.

Wrapped around a northern bay between Bastia and L’Île Rousse, Saint-Florent is yet another onetime Genoese-town-turned-summer resort. Its round, 15th-century citadel now hosts exhibits, and its mediaeval-looking Nebbio Cathedral is older than most on the island, begun under the Pisans in the 12th century. And just outside town, the vineyards of the Nebbio region produces some very good local wine and receive visitors. 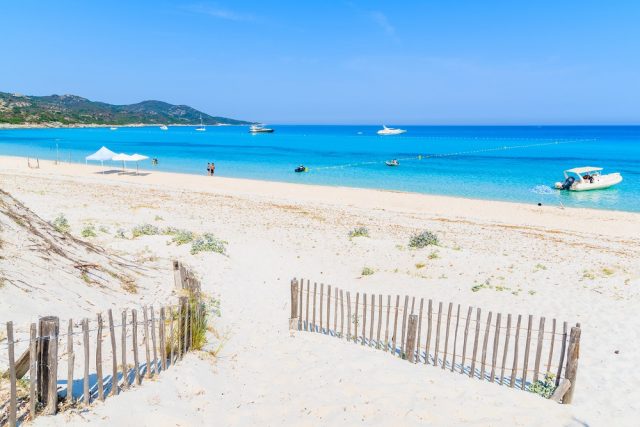 Ultimately, however, what draws most visitors to Corsica at least initially is still its stretches of white or golden sand, considered by aficionados among the best in the Mediterranean, and some with an almost Caribbean feel. The most reknowned is probably Palombaggia, 20 minutes from Porto-Vecchio. Two kilometres (a mile and a quarter) of powdery golden sand flanked by umbrella pines and mountains, it does get packed in summertime! Other similarly fetching and popular beaches include Santa Giulia and Pinarellu, also near Porto-Vecchio; strands in and around Calvi; and Roccapina, set in a nature reserve 45 minutes from Bonifacio (a little closer to town, just 20 minutes out, the Plage du Petit Spérone is a small gem).

Some of Corsica’s most striking beaches, though, are the ones more out of the way and harder to get to, for example its many isolated little coves. Many aficionados especially love Saleccia (above) because of its wild nature and scenic beauty; trouble is, apart from no amenities out here, it’s surrounded by hectares of arid countryside accessible only by 4×4 – or you can take a ferry from Saint-Florent.  And just north of L’Île Rousse, also wild and pristine Ostriconi Plage is a 20-minute from the nearest car park.

By the way, while you’re here, in addition to the fine local red, rosé, white, and Muscat wines (from three other regions besides Nebbio), be sure to sample the local cuisine, as with everything else on this island strongly influenced by the Italian. Particular standouts include polenta, cakes, and even beer crafted with chestnut flour; sheeps- and goats-milk cheese; and dishes made with wild boar (such as the island’s “signature” dish, the hearty civet de sanglier casserole.

If all this intrigues you, then my work here is done. And remember, Corsica vi ricevi (Corsica welcomes you)!