We human beings by nature tend to stereotype, of course, when it comes to national characteristics – and that goes for national cuisines, too. For example, some might think we Spaniards do nothing but sit around quaffing sangría, sipping gazpacho, and munching paella and potato omelettes (and never mind the even more clueless who somehow think we eat tacos and enchiladas, lol). But the fact is that apart from its better known greatest hits, Spanish cuisine – or more properly cuisines plural – are amazingly and deliciously diverse, with lots of regional variants, many dishes of which have made their way onto menus all across the country. Here are a half dozen key standouts. Forks up!

Its 1,500 kilometres (932 miles) of coastline and intense relationship with the sea make fish and seafood of varying types central to the nation occupying Spain’s northwestern corner. And among that marine bounty, polbo à feira (“market-style octopus”, top) is front and centre. Basically it consists of boiled octopus cut into slices and served together with salt-boiled potatoes cooked in salt, garnished with laurel and topped with salt and paprika (the spicier the better). Most traditionally, it’s all served on a round wooden platter which has been submerged in the water used to boil the octopus, to keep the dish warm longer. The consumption of polbo à feira (you’ll see it on menus outside Galicia as pulpo à feira) has skyrocketed in recent years thanks in part to culinary fairs such as the Octopus Festival held every August in the town of Carballiño (province of Ourense), where in a single day more than twenty tons are dished out, and where the best pulpeiro in Galicia is chosen.


Morcilla (blood sausage) is certainly not everyone’s cup of plasma, but it’s beloved by many in Spain – especially northern Spain – and has variants all over the country. The gold standard is considered to be the one hailing from the Castilian province of Burgos, which has even been awarded a Protected Designation of Origin thanks to special characteristics relating to its environment and ingredients. Besides pork blood, morcilla de Burgos is made with lard, onion, salt, paprika, oregano – and rice, an ingredient that differentiates it from others. It can be eaten at any time of day, served as is (often accompanied by roast peppers) or combined in other dishes (scrambled eggs, for example). 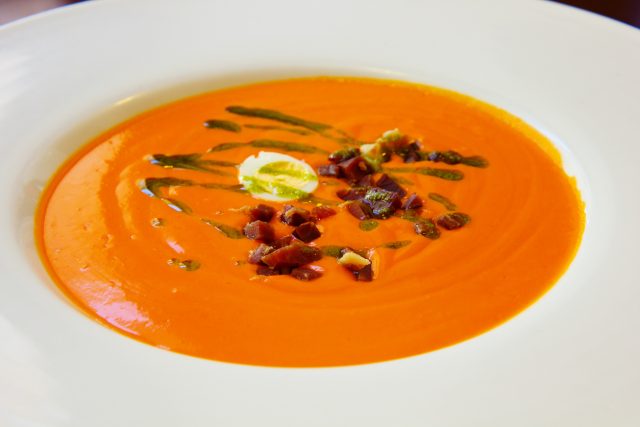 It’s not unusual for summer temperatures in Andalusia to hit 40 degrees Celsius (Fahrenheit) and even beyond. So cold soups are the friends of every andaluz, and besides the now internationalised gazpacho a still local classic (and particular favourite of this particular Sevillean) is salmorejo, a thick, creamy vegetable soup made with tomato, bread, garlic, salt and olive oil. With an intense orange colour, it’s served on a plate topped with small pieces of cured Serrano ham and boiled egg (and may also be accompanied accompanying it with fried bread). Salmorejo can also be used as a sauce to accompany other foods. Originally from the province of Córdoba, its now widespread throughout Andalusia.

Spain’s far north is a green land, but also one where cool and even cold temperatures are common. So hearty stews warm the cockles of Cantabrians’ hearts like nobody’s business. Called cocido montañés in Spanish, it originated in a valley called the Cabuérniga and spread throughout not just Cantabria but also to the surrounding regions of the north. White beans and cabbage are the two main elements, and as they simmer, chorizo sausage, blood sausage, bacon, pork ribs are added. Unlike most other Spanish stews, it contains no chickpeas, and the entire thing is eaten in the same dish instead of in phases as with Madrid– or maragato-style stews. A big old pot of cocido montañés is often placed in the centre of the family table, and each diner’s portion ladled out generously. Delicious!

Such a simple thing, roasted scallions. But among the traditions of Catalonia, few are more beloved than calçotades, communal feasts which revolve around the mass roasting over hot coals and subsequent consumption (with the hands, and even bibs) of calçots – tender, elongated shoots with little bulbs. They’re accompanied by sauces, usually salvitxada or romesco, both orange and with a recognizable almond and hazelnut flavour. Calçot season runs from November to April, with January through March being the peak – and of course if you’re not fortunate enough to be invited to a calçotada, restaurant menus are also replete with this seasonal delicacy.

Another one that’s definitely not everyone’s cup of cartilage! But in Spain the saying goes that “the pig is used right down to the trotters“, and this staple meat of Spanish cuisine has for many generations made ample appearances on tables as casquería: not just trotters but also liver, tripe, gizzards – and ears (though admittedly this earthier sort of thing has been declining in popularity among the younger generations). Pigs’ ears are one dish which still retains more of a following, with the draw for aficionados being the gelatinous essence from the cartilage. Orejas de cerdo are most often prepared a la plancha (grilled) and served as a starter with a piquant red sauce, creating an interplay between crispy on the outside and soft on the inside; they also can be found in stews such as Madrid’s famous cocido madrileño.