There was definitely some truth to the old tourism tagline “Spain is different”.  And perhaps nothing distinguishes Spain from the rest of Europe than the seven centuries most of the Iberia Peninsula spent under the rule of various Muslim dynasties which first swept up from North Africa in 711 and were gradually pushed back whence they came, with total expulsion by 1492. Islamic al-Andalus left this country with an astonishing, exotic wealth of Moorish architecture, art, and other culture in nearly all of its regions, and even after it was gone, the style/aesthetic known as Mudéjar (pronounced “moo-DAY-har”) continued to influence Spanish culture for centuries. Here’s a quick primer for examples you’re almost certain to encounter in your visits here.

Derived from the Arabic Mudajjan (“tamed”), this term coined in 1859 refers to unconverted Muslims living in post-Reconquest Spain, and by extension to the culture created by them – particularly the architects and artisans building and decorating all manner of structures in areas of Spain (and Portugal) reconquered from Muslim rulers, piecemeal from the 12th century onward; it even spread to parts of Latin America, and beginning in the late 19th century, neo-Mudéjar adaptations came into vogue (especially at one point in Madrid).

Applying Islamic forms and elements to mediaeval and Renaissance Christian art/architecture, Mudéjar is mainly executed in brick structures, adorned with elaborate tilework (above), plasterwork, wood carving, and ornamental metals – especially evoking geometry and Arabic calligraphy. Though in my humble opinion not always as graceful as its Moorish antecedents – perhaps in part because brickwork is naturally “blockier” – Mudéjar is still a uniquely beautiful idiom, and one that’s also Spain’s most unique contribution to world architecture and art. 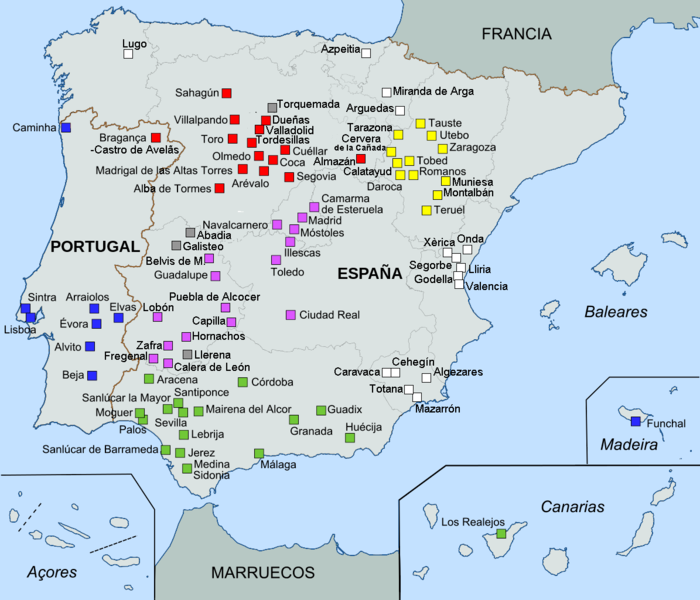 As I mentioned above, the style is found in almost all major regions of Spain, both dating back to its late-15th-century roots and in adaptations throughout the 500-plus years since. The first examples of Mudéjar – such as the churches of San Tirso (below) and San Lorenzo – date back to 12th-century Sahagún, about a half hour southeast of León. But its greatest expression flourished in Andalusia, Aragón (whose capital Zaragoza, the city of Teruel and three surrounding valleys have the single largest concentration in the country, landmarked as a UNESCO World Heritage Site), and Castile, especially in Toledo.

The Real Alcázar of Seville (tilework detail above) – Built over the course of generations following the Reconquest of Seville in 712, this grand palace is open to the public but still used by the Spanish royal family when their members are in town.

Casa de Pilatos, Seville (2nd photo above) – Begun in 1483, the Renaissance/Mudéjar palace of the Dukes of Medinaceli was used in the filming of several Hollywood blockbusters, including Lawrence of Arabia, 1492: Conquest of Paradise, Kingdom of Heaven, and Knight and Day.

Cathedral of Santa María de Mediavilla de Teruel (top) – Started in 1171 and expanded over the course of several centuries, it’s considered one of Spain’s most notable examples of Mudéjar architecture.

Cathedral-Basilica of Nuestra Señora del Pilar, Zaragoza – Its current incarnation begun in 1681 and also expanded in the following centuries, this Baroque-Mudéjar hybrid was apparently the first church in Christendom dedicated to the Virgin Mary (here “Our Lady of the Pillar“), and is home to one of Europe’s most famous Madonna statues.

Toledo various – Including the 13th-century churches of Santiago del Arrabal and Santa Maria la Blanca , as well as the 14th-century Tránsito Synagogue.

Chances are that in the course of your travels in Spain you’ll come across plenty of Mudéjar and/or neo-Mudéjar architecture; I hope this little primer will help your understanding of its origins and place in Spanish and world culture!