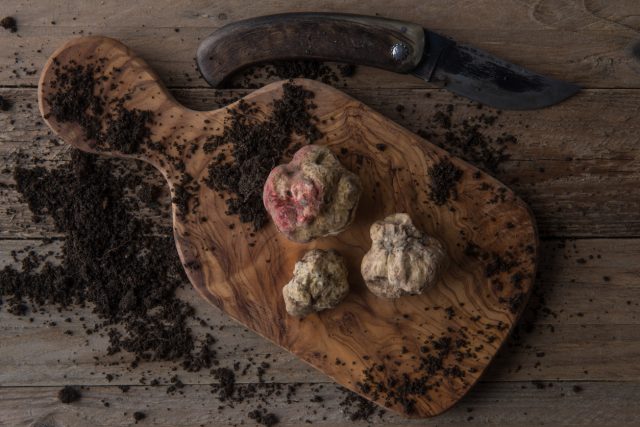 It’s that time of year again in north Italy: the “gold rush” – not for element 79 but for tuber magnatum, the “white gold” that is one of the world’s most sought-after foodstuffs. The pungent scent and delicate flavour of the white truffle turn a simple dish of pasta or risotto into a gourmet meal – though at a steep price, of course. Because while black truffles can be cultivated, their white counterparts can only be ferreted out amid the roots and fields of the European countryside, especially the south of France and the north of Italy.

Probably the most famous place in Italy to do so is around the city of Alba in Piemonte, and its 88-year-old International White Truffle Fair from 6 October to 25 November is a huge event which attracts thousands of foodies from all over Europe and beyond.

But right behind Piemonte when it comes to truffles is Tuscany, and it’s here that I recently had the pleasure of discovering the equally high-quality trufi that grow in the vast chestnut forests of its Colle di Val d’Elsa, near the historic cities of Siena and San Gimignano. Here it’s all about the quality of the soil along with the weather – a balance between plentiful sunshine and not too much rain (which will render the mushrooms spongy and essentially useless). Truffle hunting here goes on through January, and my own recent experience took place at a fantastic resort called Borgo Pignano, near the atmospheric towns of Poggibonsi and Volterra. 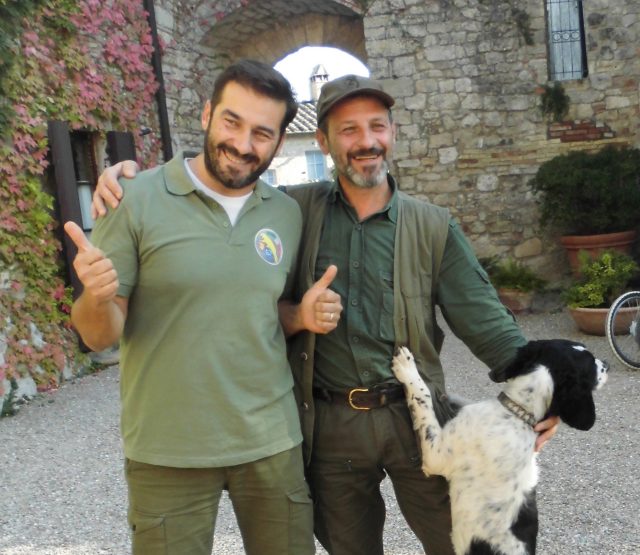 This 142-hectare (350-acre) spread is home to not just a grand hotel and spa but also an eco-friendly farm with bees, pigs, chickens, and greenhouses where just about any food used in the kitchen is grown. And then, of course, there is the possibility for hunt for your own truffles in the woods which belong to the estate.

Two professional and licensed truffle hunters, Daniele and Alesso (above), guided me on a two hour hunt, accompanied by two essentials: Pato the cute truffle dog (without whom nothing would be found) and a rather vicious looking sharp instrument called a vanghino, needed to dig the precious tubers out of their hiding places deep amid the roots of the chestnut trees. 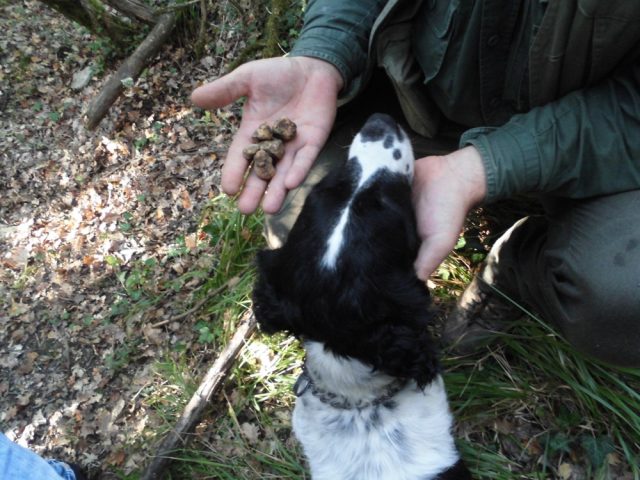 
A word about the these highly trained dogs, the preferred breed of which is a spaniel-retriever mix (as Pato is).  As Daniele explained, they cannot go hunting for more than two hours because it’s stressful for them. Dogs are by nature prone to sniff out animals, not mushrooms, so for this task they must concentrate intensely and will be exhausted after two hours. As were we, to be honest, because we went deep into the woods, over fallen trees, small rivers, through brambles and slippery leaves. But we were lucky, all in all – we were rewarded with finding five white truffles.

Only a few steps into the woods, Pato started scrabbling, nose to the ground and unearthing the first truffle. No, they don’t bark when they find a truffle, just look up and snuffle.

At a sharp command from Daniele, Pato desisted immediately so that Daniele could start digging with his vanghino, carefully pushing earth away with his fingers. Truffle dogs are seemingly gourmets too – if they’re not used to obeying and stopping, they will eat the truffle themselves!

Groups at Borgo Pignano are kept to no bigger than five to protect the environment. That’s also the reason why since the 1970s the iconic truffle-hunting pigs of yore have been banned; they caused damage to the soil and the mushrooms themselves, throwing the spores in all directions and thus impeding the next season’s growth. 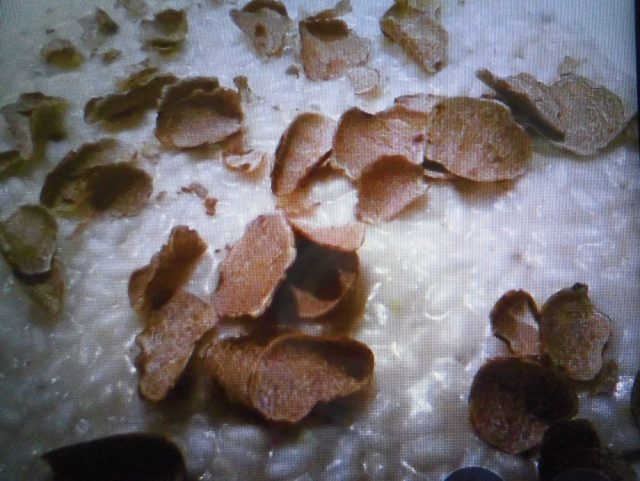 Back at the resort, chef Vincenzo Martella prepared our dinner, a thick risotto covered with an even thicker layer of truffle shavings (because we found so many) – delizioso!

White truffles, which must be firm to the touch, are best consumed fresh out of the earth. As Chef Vincenzo explained, they will however keep a few days in the fridge, wrapped in newspaper under a layer of rice to prevent them absorbing moisture.

Although Martella served us risotto, his own favourite truffle dishes are fried eggs with potato cream (according to him, shaved over the semi liquid yolk, the truffle releases its full flavour), as well as in desserts (!) – zabaione, tiramisù, and chocolate mousse. Guests at Borgo Pignano have a choice between the fine-dining restaurant and a communal table in a room with a huge fireplace – which we did and was much more fun!

The estate is pretty much self contained and you can also see how they make their honey, produce soaps, candles and even the flour for the bread. Much is done by hand; this resort is a prime example of sustainability. 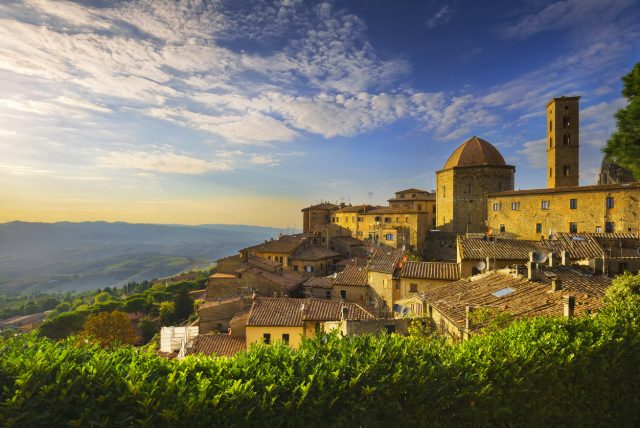 Literally in the middle of nowhere, you can relax and enjoy the peace or, if you come by car or hire a taxi, explore the beautiful town of Volterra (above), where currently the next series of the British-Italian TV series The Medici: Masters of Florence is being filmed (its distinguished cast including Dustin Hoffman). Incredibly atmospheric San Gimignano is also not far away but quite touristy, whereas Poggibonsi is much quieter but also features a castle and a lovely town center. If you happen to visit on a Sunday, you can watch bersaglieri marksmen with their picturesque cock feather hats doing their thing in front of the town hall. And some 40 minutes further away, the ochre and green city of Siena beckons with yet more history, churches, museums, its annual Palio festival, and scrumptious Tuscan food.

The nearest international airports to Borgo Pignano are Bologna, Florence, and Pisa. And of course you’ll need a car to get around. Buona caccia (happy hunting)!
Related: A Fungus Among Us! The Truffles of Northeast Spain