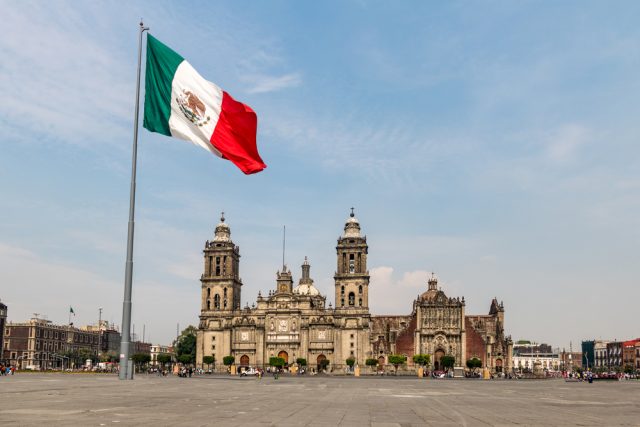 Whether you’re a first timer or repeat visitor, Mexico offers no end of fascination – and that includes its sprawling capital. And though in some quarters Mexico City has garnered a bad rep for crime and pollution, for the casual visitor (and even for most residents), its fabulous advantages greatly outweigh the drawbacks. Here’s a rundown of both, and you can be the judge!

What to Definitely Do

Explore its historical centre, cleaned up, fixed up, and offering a lively street life and marvelous Spanish colonial architecture. The district is anchored by its enormous Zócalo square (the world second largest urban plaza after Beijing‘s Tiananmen).

To the west of the centre, stroll broad Paseo de la Reforma, the city’s most glamorous thoroughfare, a hub of highrises and upmarket hotels and shopping.

Check out the Coyoacán neighbourhood a few minutes south of here, feeling like a small town (which it once was), with narrow, leafy, cobblestone streets, colourful houses, delicious restaurants and shopping opportunities at street stalls and cute shops. Then of course there’s the bright blue Frida Kahlo Museum House, showcasing the life and art of Mexico’s most iconic painter.

Make it over to Polanco, the city’s poshest – some would say snootiest – neighborhood. It doesn’t have much in the way of monuments, but it is packed with appealing shops, restaurants, cafés, and nightlife that highlight the massive income inequality in this city (and indeed, in the country at large).

Pop into several of the many tianguis (marketplaces) throughout the city. Both enclosed and open-air, they’re a mix of workaday goods, amazing handicrafts, and lots of stalls selling tasty homestyle food.

If you’re travelling with kids, there are three spots you shouldn’t miss, starting with the giant theme park Six Flags. Meanwhile, the children’s museum Papalote Museo del Niño, is an interactive, multimedia extravaganza that will engage adults, as well. Third is KidZania, an indoor “edutainment” park aimed at kids up to 14 to try out adult professions and activities – including its very own KidZania currency!

Even if you’re not a museum maven, another absolute must is the Museo Nacional de Antropología, truly one of the world’s great anthropology museums thanks to its  extensive holdings of artifacts (some of them huge and elaborate) from Mexico’s Mayan, Aztec, Olmec, and other civilisations dating back millennia.

See if you can attend a football match or perhaps a concert at the Estadio Azteca, the world’s second largest stadium (after Rio de Janeiro‘s Maracanhã), seating 87,000. If not, there are also guided tours.

Come nighttime, swing by the Plaza de Garibaldi near the historic centre to check out the mariachi bars, clubs, and restaurants, as well as a uniquely Mexican phenomenon: the mariachi marketplace. Yes, dozens of mariachi groups stoll around this square playing and singing their little mariachi hearts out, hoping to attract clients to hire them for parties and other events (they’re also here during the day, by the way, but the nocturnal scene is even more fun).

Spend an afternoon in the Bosque de Chapultepec, Mexico City’s Hyde Park or Central Park – but actually so much more. In addition to its lovely, leafy paths and plazas, this 686 hectares (1,695 acres) is home to a historic castle crowning its hill, as well as various other great attractions including the Chapultepec Zoo, the Museum of Anthropology, and the Rufino Tamayo Museum. Especially in the warm-weather months, the park also hosts various nighttime shows from theatre works to ballet to music concerts of various types.

Take an out-of-town excursion to Teotihuacán, 90 minutes north, a UNESCO World Heritage pre-Aztec archaeological site of disputed origins but rising around 400 BCE. It’s air of mystery and legend will entrance you (if you’re not hiring a car, buses and tours can get you here).

What to Definitely Not Do

Take a taxi on the street, as this is indeed, sadly, a security risk, especially after dark. Instead, look for taxi stands of the pink-and-white vehicles, or pre-order by phone or smartphone app.

Drink directly from taps. The water-delivery system introduces contamination, and locals are used to it, but theses days many don’t drink it either. And “Montezuma’s revenge” is no joke. Fortunately, most better hotels and restaurants purify their water, and bottled water is available pretty much everywhere. Be careful, too, with water-based fruit shakes like agua de frutas.

Not dress in layers. The temperature fluctuates greatly throughout the year, but especially from the end of summer through the start of spring. You could be looking at 5 Celsius (41 Fahrenheit) at 9 in the morning, rising to 23 C by 2 pm, then dropping to 10 C by 8 pm. So with layers, you can add and subtract as needed!