Two hours’ drive east from Montevideo and a little over an hour from Punta del Este lies a stretch of coast some 180 kilometres (112 miles) long that’s been the secret of a few in-the-know Uruguayans and fewer neighboring Argentines, and even fewer other foreign visitors – with wild sand dunes, little villages, sea-lion colonies, whale watching (October and November), and unspoilt white-sand beaches such as Punta del Diablo, Cabo Polonia, Santa Teresa (top), and La Paloma. But my subject today lies not here but inland: a look at the ecotourism bounty of one of Uruguay‘s more undersung departments, La Rocha. 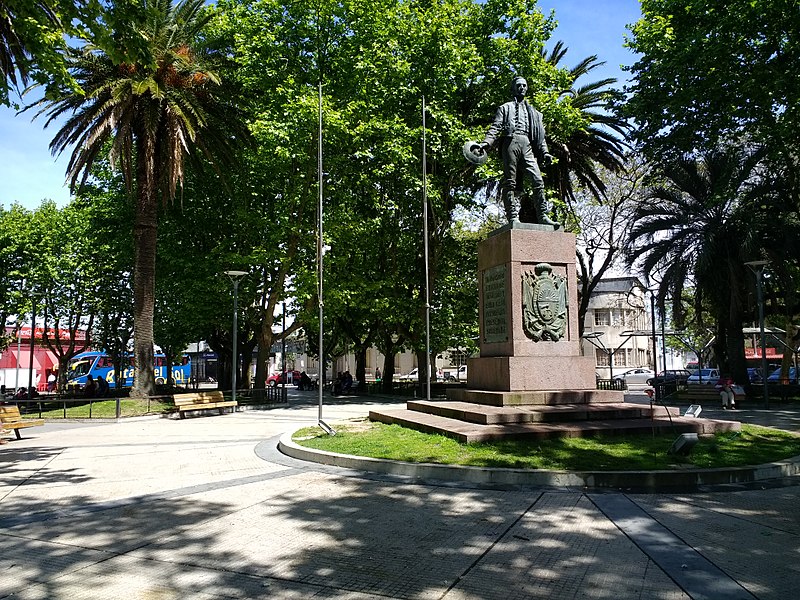 Founded toward the end of the 18th century, the department’s eponymous capital Rocha (pop. around 25,500) is a small, pleasant city about just a few kilometres inland from the coast, featuring charming architecture (including an elegant 1910 theatre) and a relaxed, very local vibe.

But for the ecotourism-minded, there are a number of other highlights – all benefiting from this area’s moist, temperate, ocean-influenced climate – spread across the 10,551 square kilometres (4,074 sq. miles) of this bucolic department, which mostly makes its living from cattle ranching (and let me tell you, organically raised, free-range Uruguayan beef is as good as or maybe even better than Argentine – here I enjoyed one of my tastiest parrillada barbecued meals ever). 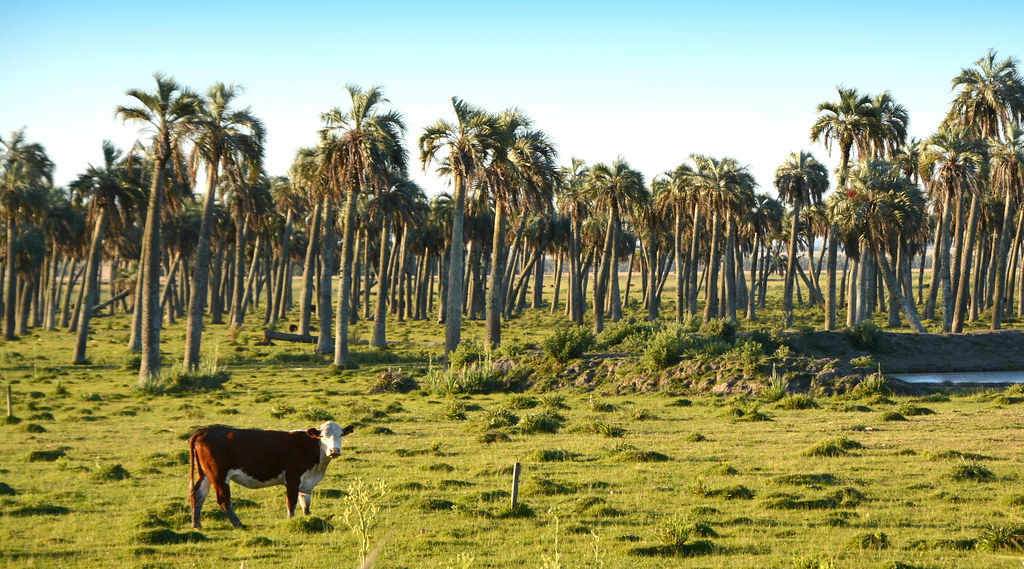 Just outside the department’s second largest town, Castillos (pop. barely 8,000), about 45 minutes from Rocha city and even closer to the beaches, The Palmares de Rocha are a 70,000-hectare (270-sq,-mi.) swath of indigenous butia odorata palms, some 200 to 300 years old and up to nine metres (30 feet) tall. These palms also yield a fruit, called butiá, which is locally made into sweets, jams, and liqueurs.

Another even more characteristic local tree is the ombú, a massive evergreen indigenous to the pampas of Uruguay and Argentina, some of which live at least 500 years and sport protuberant roots and hollow trunks, as well as fantastical canopies spreading 12 to 15 m (40-50 ft.) wide and with a height of 12 to 18 m (40-60 ft). They grow all over the region, but the best place to see these majestic ombúes (also dubbed bellasombras – beautiful shade) is the magical forests of them – like something out of a Tim Burton movie – around the large, freshwater Laguna de Castillos northwest of Cabo Polonia on the coast).

And although Uruguay is often associated with pampas and other flatlands, did you know it also has mountains? OK, well – hills, really. But some 200 to 500 m (656-1,640 ft.) high, and lying just 10 km north of the departmental capital, the Sierras de Rocha present wild, fantastical landscapes packed with indigenous flora along with fauna such as the carpincho (the world’s largest rodent, up to 1.30 m/four ft and 65 kilos/143 pounds), the guazuvirá (a local species of deer), the mano pelada (crab-eating racoon, though it’s omnivorous), and three species of wild cats; the local conservation group Ambá runs various expeditions out here. One of the most prominent hills is Cerro de la Virgen, crowned with a viewing platform for gazing out not only at the sierras but the Atlantic coast, not far off (you can even spot whales from up here). Unless you stay in Rocha town, local inns and bed and breakfasts (even several yoga and other New-Agey retreats) out here make great bases for rambling as well as horseback riding; mountain biking; ATVing;  bathing in natural pools and waterfalls; even paragliding. 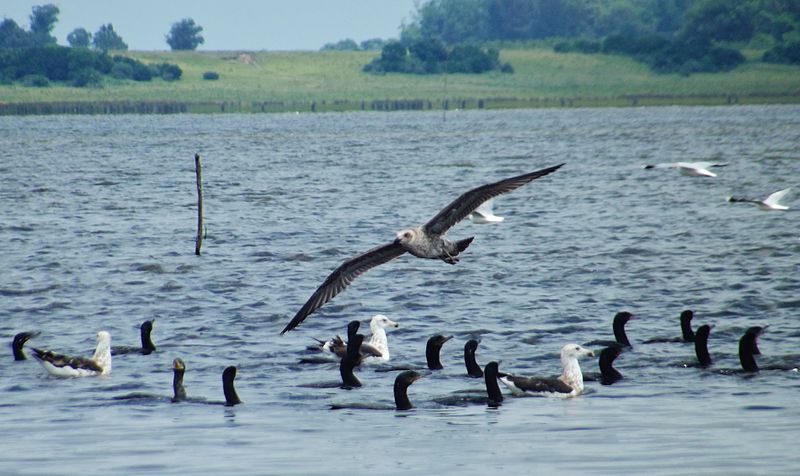 Another cool outdoor spot is the 7,200-hectare (28-acre) Laguna de Rocha, just a short hop in from the beach at La Paloma and periodically open to the ocean as the sandbar in front of it waxes and wanes.  Ringed by reeds, salt marshes, and flood plains, it’s just half a metre (1½ ft.) deep and it’s a birders’ bonanza, attracting more than a hundred species including the Amazon kingfisher, the Chilean flamingo, the intriguingly named dark-faced ground tyrant, the whistling heron, and the white-throated hummingbird; the surrounding area, nearly three times the size of the lagoon itself, is home to fauna such as capybaras, foxes, and otters, and off the coast, you can spot whales and La Plata dolphins.  There’s also a 70-year-old community of traditional fishermen and shrimpers along the sandbar area, as well as traditional, family-run cattle farms. 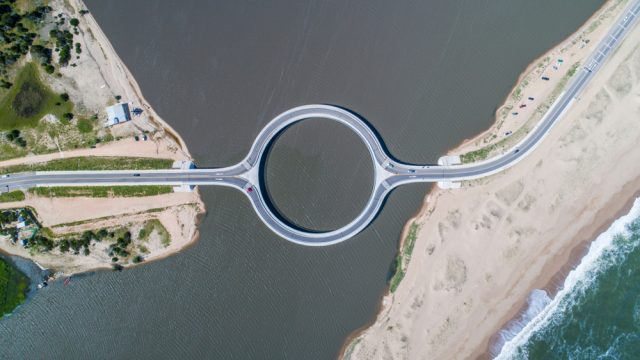 This 1,750-hectare (6¾-acre) freshwater lagoon is sheltered from the Atlantic by a thin strip of beach near right at Rocha department’s southwestern corner at the border with next-door Maldonado department. Reachable in about 45 minutes from Rocha town and an hour and a half from Cabo Polonio up the coast, in addition to plenty of birds – such as Oirog’s gull, the buff-breasted sandpiper, blackthroated swans, and southern flamingos – the lagoon’s a great place to witness amazing sunsets and is also popular with kiteboarders.

Part of the Laguna Garzón has been crossed for the past three years by a cool new bridge (above) designed by the New York City-based Uruguayan starchitect Rafael Viñoly, the Garzón Bridge links the two neighbouring departments and is the only one in the world which is shaped like a circle designed to calm traffic and built high enough above the water to minimise its environmental impact. There’s also an observation deck and fishing pier up here.