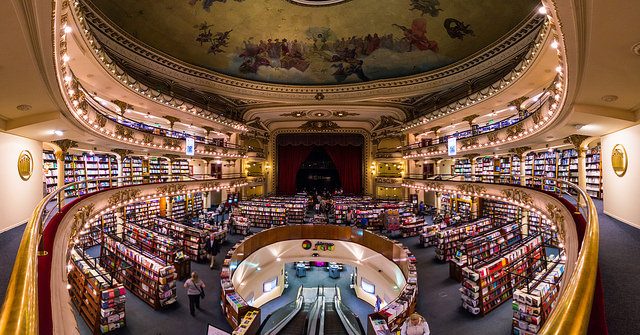 Sometimes it seems, sadly, that brick-and-mortar bookshops are slowly slipping into the past, with the exception of some chains, speciality shops, and doughty independents with devoted followings. But there’s one city where they’re still a thing: the capital of Argentina, which some have called “the world capital of bookshops”, with an estimated 734 for a population of 2.8 million, or about 25 bookstores for every 100,000 porteños. Furthermore, Buenos Aires also holds the distinction of having one of those bookshops be considered the world’s most beautiful. Welcome to El Ateneo Grand Splendid. 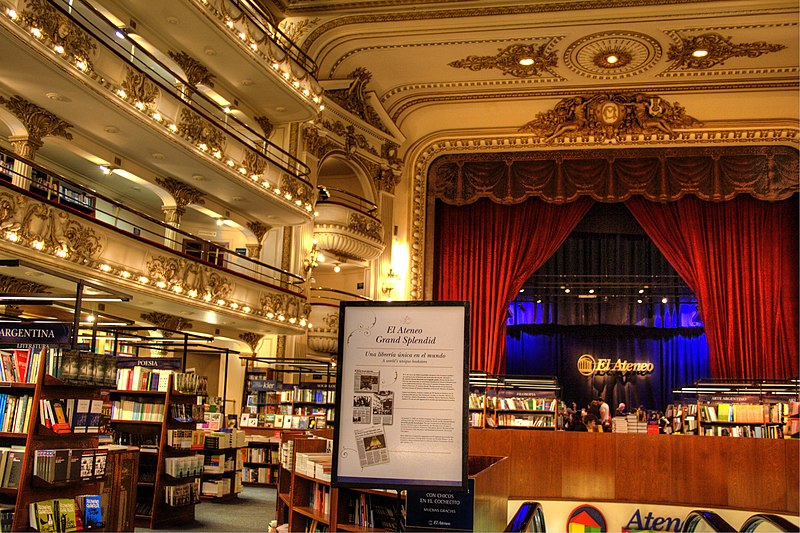 About to celebrate its 100th anniversary in 2019, the Beaux-Arts-style Teatro Gran Splendid started its life in the well-heeled Recoleta district as a 1,050-seat theatre which quickly became a cultural lodestar of the city, hosting theatre works as well as ballet; symphonic and other concerts; and of course lots of tango, attracting the likes of Carlos Gardel and other immortals of the genre. Then in the 1920s it was converted into a cinema. And most recently, in 2000, it was leased by a publishing group which within renovated it into the magnificent bookshop it is today.

These days, instead of theatre seats, bookshelves and reading nooks line its floors and balconies, providing eye-popping views of the ornate woodwork; the ceiling frescoes (depicting an allegory for peace after World War I); the dramatic crimson-velvet curtain framing the stage that’s now home to a bar; and all the other elegant, gorgeous details of a bygone age. An upper floor, meanwhile, is devoted to exhibitions. Around a million visitors a year come flocking – some to browse, more to gawk.

Speaking of browsing, if you don’t read Spanish, there’s a selection in English, as well – on the fiction side consisting mostly of romance and mystery novels, interspersed with a smattering of classics. It’s also great for English-language books on Argentina and Latin America travel, history, culture, and cuisine. And meanwhile, the basement is home to a great selection of music, videos, and children’s books.

El Ateneo Grand Splendid is open daily (Monday-Thursday 9 am to 10 pm, Friday-Saturday 9 am to midnight, Sunday noon to 10 pm).