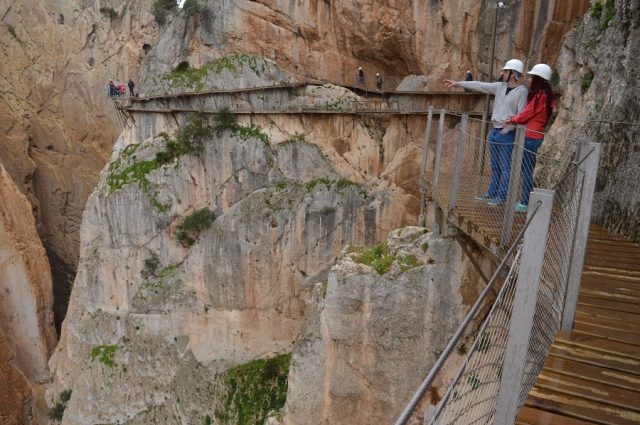 You may have heard of Málaga province’s stunning Caminito del Rey (“King’s Little Pathway”), once named the most dangerous in the world after claiming five lives. Built 1901-05 as workers’ access routes to local hydroelectric plants, it was closed to the public for several years, and since re-opening in 2015 after a three-year restoration it’s still as head-spinningly high (up to 100 metres/330 feet) and dramatically beautiful – and now definitively safe, appropriately rebuilt (above you see a section with both old and new pathways) and/or reinforced and with metre-high railings. Still, I booked the tickets (not cheap, either, at 25€ a head) while trying not to think too much about the vertiginous heights of a path clinging to a sheer rock face or whether my stomach or head could handle it.

About one metre (three feet) wide, the pathway runs for eight kilometres (five miles) through El Chorro gorge outside the town of Ardales, fifty minutes inland from Málaga city. Half of it is ground-level mountain trail, the other half a bolted-on wooden boardwalk. And I’m happy to say that even the suspended bridge at Desfiladero de los Gaitanes, one of its most photographed spots, didn’t make my stomach turn. I stopped on the bridge, looking way down, and rather enjoyed the pronounced bounce (hubby created) – rather proud that I didn’t need leading across like my son’s girlfriend. I’d even stepped out onto the glass floor with no problem, while inwardly smiling at another woman clinging and looking towards the rock face as she sidled past.

Due to its well earned reputation and eye-popping scenery, Caminito del Rey is these days a fairly busy attraction – even if a bit of a commitment because of the admission fee and the fact that you have to walk the entire length – which can take up to four hours). But should you find yourself elsewhere in Spain, and/or prefer a similar but less vertigo-inducing experience, here are five more river walkways – two more in Andalusia but three farther north, up in Aragón near Zaragoza (and what’s more, all with free access and no obligatory helmet):

Right in my own back yard, just over an hour east of Jaén city, this easy, fairly level 11-km (seven-mi.) route follows the sinuous, beautiful Borosa River in the foothills of the Cazorla Mountains – in my opinion well worth sticking it out till the end (three hours each way) for the lovely little waterfall with crystal clear water (bring your swimsuit!), but with several other options to head back sooner.

Another mountain town, with steep cobbled streets and whitewashed houses, Castril is an hour 45 minutes northeast of the city of Granada city. Park by the waterfall and head into the leafy tunnel of trees to the beginning of this very pretty wooden cantilevered walkway following the tumbling, greenery-engulfed Castril River, where you can dip your toes and cross a wobbly, suspended bridge across (which hubby also just had to jump upon). It’s an easy 2.1-km (1⅓-mi.) circular route with plenty of vegetation and taking just a leisurely hour to complete; furthermore, an ideally placed bar en-route makes a great pit stop, especially in summer.

Outside this small town just under an hour from the city of Teruel and about an hour and 45 minutes from provincial capital Zaragoza, this attractive walking route (signposted PR_TE10) has two very different sections. The first is 6.5 km (four mi.) along a suspended walkway with hardly any differing of level, which can easily be covered in an hour and 45 minutes. It starts in the mining area of Santa Bárbara, passes the 17th-century Baroque Virgen de la Zarza chapel, and finishes at the La Aldehuela reservoir in front of a hulking, abandoned electric plant. The second part runs a rather more adventurous 2.5 km (mile and a half), climbing from the water’s edge to the height of the dam wall.

This rather gentle 2.2-km (1⅓-mile) circular route actually starts in the Plaza Mayor of Alquézar, a tiny medaeval mountain village about 90 minutes northeast of Zaragoza. The first of seven foot bridges comes into view between a rocky crag and the castle wall, and the metal suspended walkways lead to the old hydroelectric mill, where a shallow turquoise bathing pool with small, sandy beaches makes a great cooling down spot in the summer. 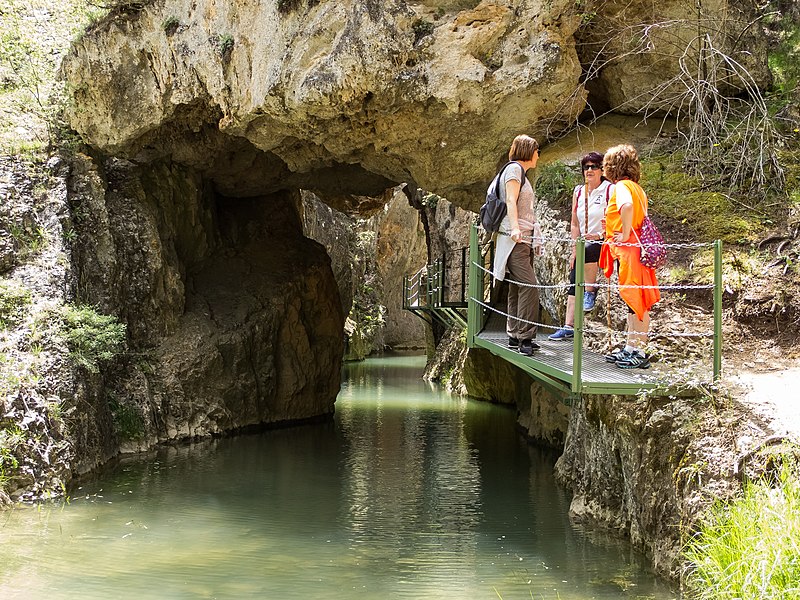 Also about an hour from Teruel (and three hours from Zaragoza), in the even tinier (pop. 80) village of Calomarde, an 8.5-km (5¼-mi.) passes through stunning scenery of the De La Hoz Ravine, with bridges, walkways and steps down to a natural rock bridge, the Puente de Toba, following the Blanco River to its end, where it flows into the Guadalaviar River. Ending in another village, Frías del Albarracín, the walk takes about two hours and 40 minutes.