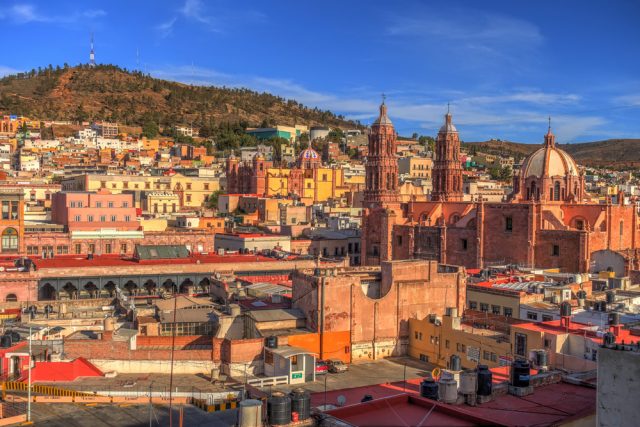 Located in north-central Mexico a bit over seven hours by road and an hour and a half by air from Mexico City, Zacatecas (pop. just over 138,000) is one of the country’s more glorious and romantic colonial cities, founded by Spanish colonisers in 1564 as a silver mining camp.

The Allures of Zacatecas City

This city’s crowning glory, unsurprisingly, is its largely Baroque old town, one of the world’s loveliest and a UNESCO World Heritage Site featuring quite a few façades covered in pink stone. Highlights in this warren of cobbled streets, anchored by the central square, the Plaza de Armas on which you’ll find the city’s most important civic and religious buildings, including the state government palace, supreme court, and the early-18th-century cathedral. Others in the quarter include the also early-18th-century San Francisco Convent (whose star attraction is a fine museum showcasing pre-Columbian artifacts along with a vast collection of thousands of traditionally inspired masks created by 20th-century painter Rafael Coronel). Such is this city’s romantic appeal that many Mexicans come here to get married.

And by the way, you can add your own bit of romance by splurging on a night or two at the Quinta Real, a 49-suite luxury hotel occupying an 1866 bullring (below)!

Zacatecas is also known for its many picturesque annual festivals – 13 in all, the most of just about any town in this country apart from Mexico City – so there’s a decent chance you can schedule your visit to include one of them. Still left on the calendar for 2018: the biggest party of the year, the Morismas de Bracho (30 August-3 September); the Feria Nacional de Zacatecas (6-24 September); and the Festival de Teatro de Calle (20-27 October), a street-theatre extravaganza.

The 5 ‘Magical Towns’ of Zacatecas State

Mexico Tourism has designated 111 towns, villages, and small cities throughout the country as “Pueblos Mágicos” because of their particular traditional charm and cultural traditions, and the state of Zacatecas is home to five of these. If you can spare an extra day or three, any or all of them make fantastic day trips or overnighters from the state capital!

Founded in 1569 and ensconced in a green valley just under an hour’s drive southwest of the capital, Jerez (pop. nearly 58,000) centres around a square called Jardín Rafael Páez, where you can watch locals playing dominoes and bands playing local tamborazo music. Local highlights include the 19th-century cemetery Panteón Museo de Dolores; excellent handicrafts; and delicious local cuisine, with distinctive dishes such as boda jerezano (aka asado de boda), pork stewed with chiles, traditional at weddings.

The oldest of Zacatecas’ Pueblos Mágicos (above) was founded in 1531 in a nopal-cactus-strewn area previously inhabited by the pre-Columbian Tecuexes and Caxcanes. With just over 26,000 inhabitants lies some 2 1/2 hours south of the capital. It’s worth the drive to experience the music playing all over Nochistlán, Catholic processions, and the pervasive aromas of the surrounding peach and lemon orchards. Annual highlights include January’s big Papaqui, in honour of St. Sebastian, and the Fiestas de Octubre (first Sunday in October). If you can’t make either, try to be here on a Sunday, when men/boys and women/girls walk in traditional circles in the traditional El Jardín. The surrounding hills and gullies, meanwhile, are great for hiking.

Much smaller than the others, with a population of around 5,600, this 424-year-old town once another centre of gold and silver mining is itself a UNESCO World Heritage Site, just under two hours east of Zacatecas city, along a route filled with historic 17th-century haciendas. The main square is marked by a historic clock tower and is awash in the aromas of surrounding gardens. A particularly tasty local dish is conejo con mole de pinole (rabbit in a rich brown mole sauce).

Yet another UNESCO World Heritage Site in the northwest of the state, in a valley some two hours from the capital, this small city of just over 58,000 is filled with charming plazas, narrow streets, and orange-hued buildings, including some monumental colonial landmarks such as the 16th-century San Mateo monastery complex. Festivals include February’s Virgin of Candelaria; another on June 6 celebrating its founding in 1555; and the third is July 27th’s Noria de San Pantaleón. A must-taste – besides the asado de bolas mentioned above – is brujitas, turnovers filled with beans or shredded meat (the name, which means “little witches”, comes from the idea that they “fly” out of the baskets when brought for sale to the market). It’s also well worth exploring the nearby Sierra de Órganos National Park, known for its diverse arid ecosystem and towering rock formations reminiscent of organ pipes (hence the name) – so striking it’s been used by Hollywood as the backdrop to movies involving the likes of Glen Ford, Gregory Peck, Anthony Quinn, Ringo Starr, and John Wayne.

Some three hours south of Zacatecas at the forested juncture of two small rivers, the scent of orange blossoms is in the air in this lovely town of some 3,200 inhabitants, founded in 1536 not for mining but rather focused on livestock and the cultivation of agave plants for mezcal liquor. And indeed, besides wandering Teúl’s lovely old quarter, visitors should take the time to stop at one or more of the area’s seven mezcal distilleries. The town is also known for its delicious cheeses, wooden masks, and ceramics.