The island of Gran Canaria is known for its balmy year-round temperatures – as well, of course, as some of Europe’s most enticing beaches. But instead of spending their entire holiday turning and burning on the coasts, I always encourage visitors to take advantage of the delights of my adopted home Las Palmas de Gran Canaria. One of the Canary Islands‘ twin capitals (a status shared with Santa Cruz de Tenerife), this city of  384,000 is these seven islands’ most bustling and multicultural, and a regular port of call for cruise ships, with a mix of of modern buildings with Old-World architecture and cobbled streets and a sub-tropical climate making it feel at times more Caribbean than Castilian.

Founded in 1478 by invaders send by the “Catholic Monarchs” Ferdinand and Isabella (who went on to dispatch Christopher Columbus to the Americas 14 years later), in the 20th century the sleepy city became one of the Canary Islands’ earliest tourist destinations – one notable early visitor, in 1927, was famed English mystery novelist Agatha Christie, who completed The Mystery of the Blue Train, one of her Hercule Poirot titles, at the Hotel Metropole, since converted into a Canarian government building (she even has a local street named after her).

The island’s airport is roughly 20 minutes from the capital. Avoid the taxis and go local by taking a Global bus to their Santa Catalina terminal rather than the San Telmo one. After dropping your bags at one of an ever increasing selection of hotels, begin your day at the La Puntilla end of Las Palmas’ golden wonder of a beach: Playa las Canteras. It’s never too early (or, indeed, late) for a coffee on the island and the terraces along here are perfect spots for people watching. For a regular cuppa, ask for a café con leche – although locals tend to prefer the shorter cortado, which is served in a glass (request yours largo if you prefer a milkier version).

Suitably caffeinated, you’re now ready to indulge in one of the islanders’ treasured pastimes: a paseo. Stroll westwards along a promenade running for 2.8 kilometres (roughly 1¾ miles) above Gran Canaria’s longest beach. At either end, La Puntilla and surfers’ fave La Cicer, blue-collar neighbourhoods La Isleta and Guanarteme have become more gentrified as the all-year-round warm has turned the city into a hotspot for digital nomads. 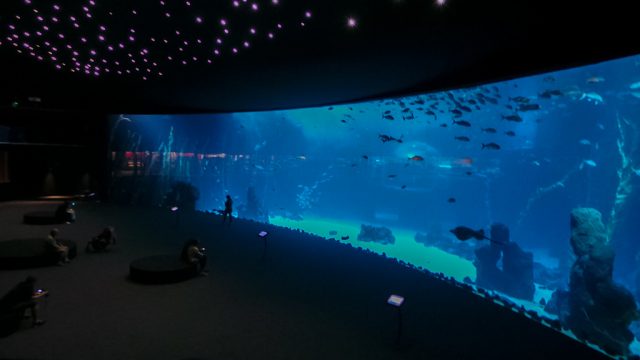 One of the reasons Las Palmas de Gran Canaria lost tourists to the likes of Playa del Inglés farther south is its tendency to cloud over. Indeed, the city is engulfed by the panza del burro (donkey’s belly), a low-lying cloud cover, for the bulk of the summer. A great local non-beach option is the new Poema del Mar, a state-of-the-art aquarium opened in winter 2017. Its beach section houses a tank with more than 400,000 litres (105,669 gallons) of ocean water packed with multi-coloured fish. Elsewhere, the deep-sea zone boasts the world’s largest curved glass wall (above). Poema del Mar are as committed to education as they are to entertainment, and are eager to share news of their conservation projects, which include the return of the likes of loggerhead sea turtles to the wilds of the Atlantic.

When the sun goes down yet the temperature hardly, make your way to nearby Parque Santa Catalina, which despite its name is more square than park. Stay street level to watch the locals play dominoes or take a lift up to the top floor of one of the plaza’s hotels to enjoy a birds’eye view over tasty artisan cocktails. 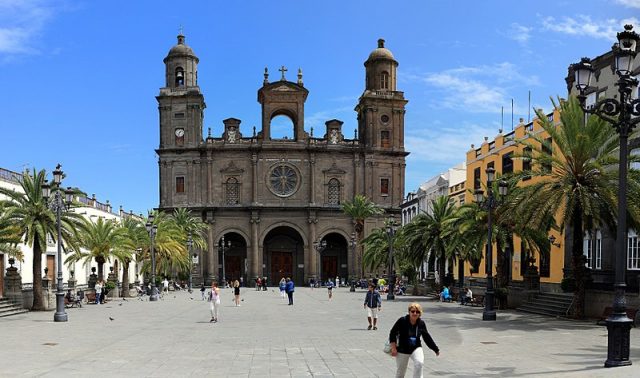 What was once an outdoor market dating back to 1787 became the covered Mercado de Vegueta in 1858. Rub shoulder with and get photo ops of locals doing their morning marketing amid the colourful produce, meat, and fish stalls, and sit down for a tasty breakfast of churros (fried dough) dunked into thick hot chocolate at one of the churrerías in and around here.

Just around the corner, as in a two-minute walk, is Casa de Colón (Christopher Columbus House). Don’t let the name fool you, as the great explorer never lived here but was rather received here in 1492 at the residence of governor Antonio de Torres whilst repairing ships sabotaged by disgruntled crew members as well as recruiting rather more reliable sailors.

The nearby Catedral de Santa Ana was built over 70 years over the course of the 16th century and remodeled since into a mishmash of Baroque, Gothic, and neoclassical styles, overlooking the Plaza de Santa Ana, a smaller version of Madrid’s Plaza Mayor (and with just a couple of eateries rather than the dozen or so in Madrid – for other options, check out nearby cobbled streets such as Calle Montesdeoca). 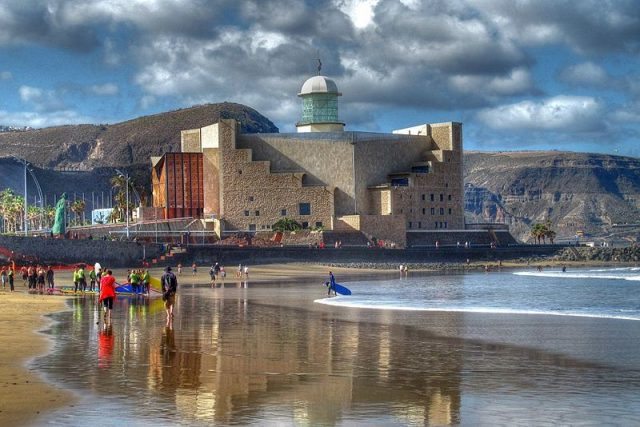 Cross the GC-5 roadway to explore the neighbouring Triana barrio, where the Calle Mayor de Triana is Las Palmas’ main shopping street. But just like London’s Oxford Street, it’s what’s off it which is more interesting, such as Plaza Cairasco, where the Hotel Madrid takes pride of place. Franco slept the night of 17 July 1936 in Room 3, and the next morning began an uprising against the democratically-elected Second Republic which led to the Spanish Civil War. Then, just under 20 years later, Gregory Peck was a barfly there by night after shooting John Huston’s Moby Dick by day. Explore the districts increasingly sophisticated foodie scene, side by side with more traditional bars and eateries.

And finally, if on either of these two nights there’s a classical or other concert on at the Auditorio Alfredo Kraus (above), designed in the 1990s by Óscar Tusquets toward the end of the Playa de las Canteras, by all means take advantage!