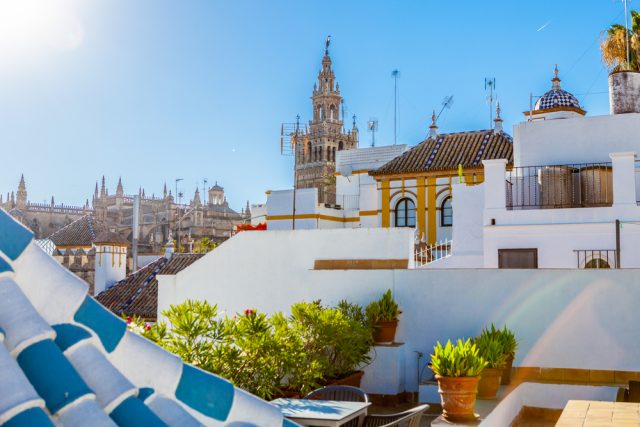 The capital of Andalusia – and Spain’s fourth-largest city – looks its age – in a good way – a journey through its streets crosses time, space, and genre. With architecture that’s at turns ancient Roman, Moorish, Gothic, Renaissance, and Baroque – and of course these days no small amount of cutting-edge modern.

Great to visit in winter and for an alternative spring break when the temperatures are closer to 15° Celsius (59° Fahrenheit) than the high as 50° (122° F) it can reach at the height of summer. Keep cool in the warmer months by strolling along the city’s water feature, the Guadalquivir River. Seville’s harbour, located approximately 80 kilometres (50 miles) from the Atlantic Ocean, is Spain’s only river port. Another way to chill is to sup on a caña, a roughly half-pint glass of the local suds, Cruzcampo.

You’ll need at least two days to explore Seville fully. Here are some top tips to get the best out of your stay. Do them in any old order but tick them off bucket-list style for maximum effect. 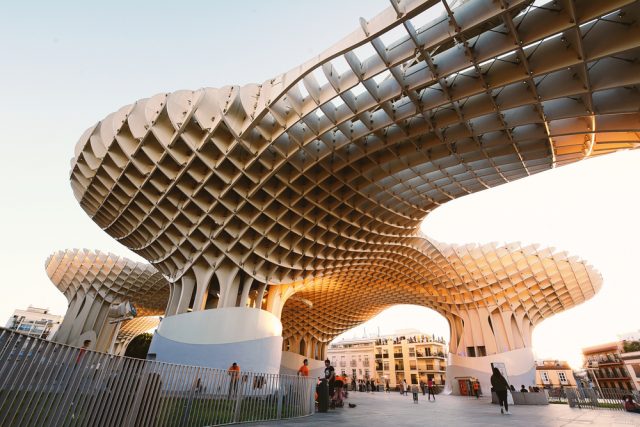 History is all around you in beautifully-preserved Seville. The city’s majestic 15th-century cathedral is the world’s third largest, its royal palace (Alcázar), dating back to the 8th century – the oldest permanent European royal residence – and its 16th-century General Archive of the Indies, the most significant collection of documents after the Vatican City archives. Unsurprisingly, UNESCO have designated both World Heritage Sites.

It’s at the unlikely hyper-mod setting of “The Mushrooms“, aka Metropol Parasol, aka officially Las Setas de la Encarnación – where you can go all Marty McFly however, mixing past and present. Love ’em or loathe ’em (and many locals are haters), the world’s largest wooden buildings have become foremost among cutting-edge-modern Seville landmarks. They’re also home to Past View Sevilla, which allows visitors to see how local buildings originally looked. Equipped with special glasses, an iPhone, and earphones, you’ll see and hear history in the making – including the arrest of Miguel Cervantes, the greatest of Spain’s literary giants, and the opening of the Giralda, the iconic bell tower of the cathedral. 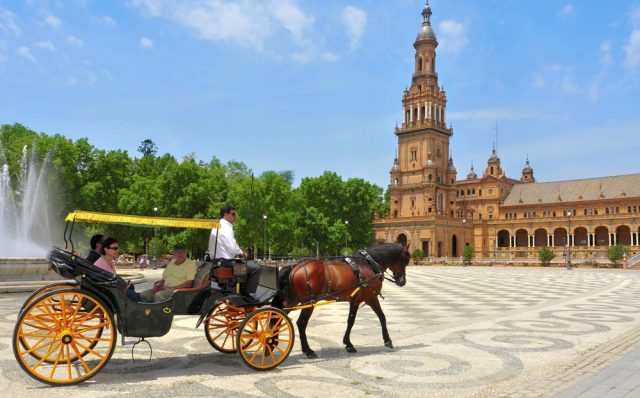 On Foot, Horse, and Tram

If you really want to take in everything Seville has to offer, the best way is by foot. Although prepare to get lost, in more ways than one, in the labyrinth of streets which doubles as the pedestrianised city centre. You can’t even use an orange tree as a reference point, for these trees are here, there, and everywhere. Clearly, for Seville – where among other things they’re used to create the famous local marmalade – oranges are the only fruit.

Another alternative way of getting around Seville is by horse, with Andalusians noted practitioners of equestrianism. As you’ll see if you’re lucky enough to catch one of the shows which see horses perform to music. A more everyday experience is a horse-and-carriage ride around the city. Check out the equine taxi rank at Plaza del Triunfo.

Seville does have a Metro. However, a more picturesque journey along the tracks is to be found on the street-level T1. This 2.7-kilometre (1⅔-mile) tram route through the heart of the city only has four stops: Plaza Nueva, Archive of the Indies, San Fernando, and Prado de San Sebastián. 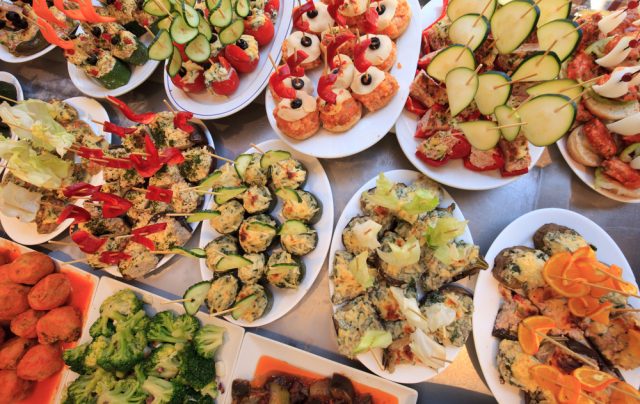 Eating and drinking in Seville is superb, with its some 3,000 eateries and bars – and furthermore, it’s widely regarded as the world’s tapas capital (though Granada is also a strong contender). Public drunkenness – at fiestas aside – is a rare sight in Spain. The reasoning would be simple: Spaniards ensure their stomachs are well lined by snacking as they booze.

Across you the river via the Isabel II Bridge, the less touristy area of Triana is an especially good neighbourhood for tapas. But to avoid walking into a tourist trap, though, it’s recommended to take a tapas tour. Devour Seville Food Tours steer you away from the overpriced, faux tapas joints,  leading you to the authentic places beloved of locals in neighbourhoods which are more residential than anything else. 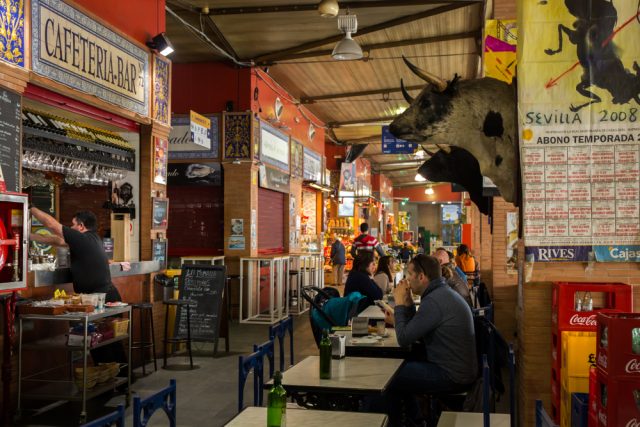 To Market, To Market

Seville has four main food markets: Arenal, Encarnacíon, Feria, and Triana. All have different hours of business but you can guarantee if you visit one and it’s closed, the next one you try will be open.  The last of these is the most interesting of these, a 150-year-old market constructed on top of the foundations of San Jorge Castle – famously once the headquarters of the Spanish Inquisition. Here around 100 stallholders, proudly displaying their titles on ceramic nameplates, sell Spain’s famous cured ham and sausages, seafood (some of it still living), and locally raised fruits and vegetables. 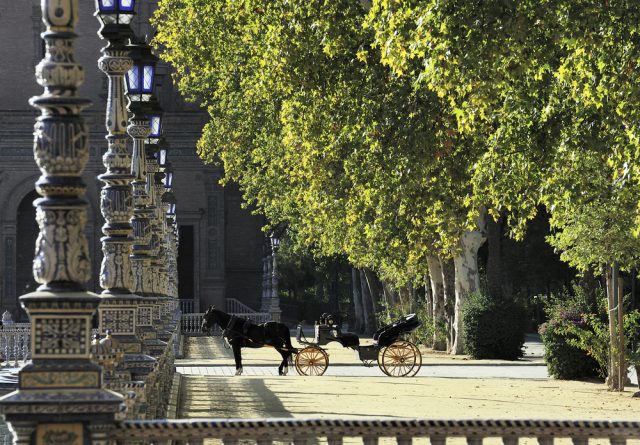 If you take the bus which connects Seville’s airport (about a half hour away) and its city centre, María Luisa Park, the city’s main green space, will be the first you see, centred around the gardens of the 17th-century Baroque Telmo Palace, now the seat of Andulusia’s parliament;  here you’ll find the Mudéjar Pavilion (the Moorish-influenced style of post-Islamic Spain), now the Musuem of Arts and Traditions. Other lovely parks include centre-city Alameda de Hércules (one of the oldest public gardens in Spain and all of Europe), the gardens of the Alcázar, and the Murillo Gardens. A bit up the Guadalquivir River, eight-year-old Alamillo Park provides another delightful respite on Cartuja Island, site of the 1992 World Expo and today home to various museums and cultural attractions. 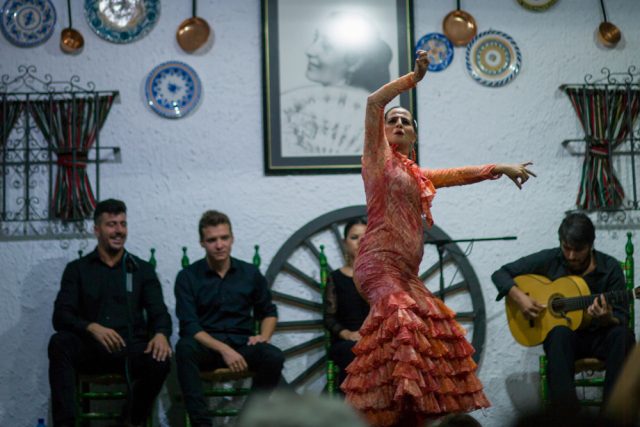 Get a Good Clubbing

Seville nightlife is a mix of the more contemporary – familiar throughout the world – and flamenco joints (such as Triana’s Casa Anselma), which still enjoy considerable popularity among many locals. Head to the central – and studenty – Alfafa district, where prices reflect the funds available to the majority of their clientele. Clubs here are on the small side, as they are in the nearby Alameda de Hércules neighbourhood. Don’t be surprised to see these empty before midnight and then in a reverse Cinderella-like moment, magically fill up when the clock strikes twelve. For a flashier night out, head to Cartuja Islands’s Antique Theatro, being sure to scrub up well and put on your glad rags to party the night away with local sporting heroes (and this being Andalusia, we’re talking bullfighters as much as football players).