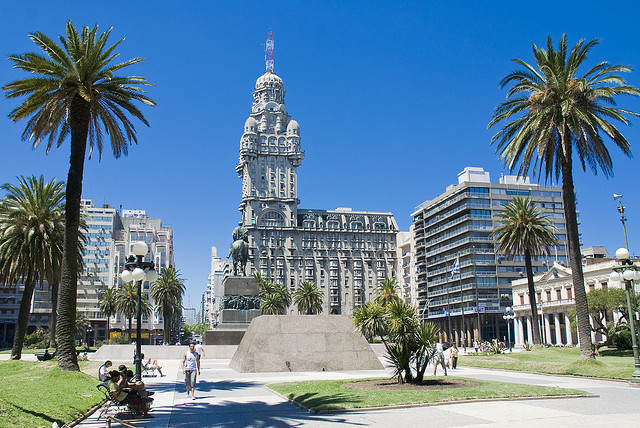 The small country of Uruguay and its progressive president have been making a good bit of news lately,  but its pleasant capital – the Western Hemisphere’s southernmost – on the oceanlike Rio de la Plata remains pretty much as laid-back as it’s always been. And one thing you notice after walking around this city (to which Iberia starts flying four times a week on Sept. 1) is how much Montevideo residents truly love their mate, an herb tea also popular in Argentina and Paraguay.

Actually, “love” may not even be a strong enough word. It seems everyone here is constantly drinking the stuff, thermos in hand, either alone or in groups. Coffee? Not so much. No soft drinks, or even bottles of water. It seems to be all mate, all the time.

And the national drink is a smooth, soothing infusion that fits perfectly with the laid-back, unhurried vibe of the city, which while gracious lacks the grandiose monuments of some other South American capitals. The Plaza de la Independencia (Independence Square, top) marks the edge of the Ciudad Vieja (Old Town), and that’s where you’ll find the city’s most iconic landmark, the Palacio Salvo, a massive, somewhat bizarre Deco/neo-Gothic hybrid from the 1920s. Right next to it is the historic Puerta de la Ciudadela (Gateway of the Citadel), one of the few remnants of the 18th-century city walls.

The Ciudad Vieja’s main drag is the Peatonal Sarandí, a pedestrian thoroughfare where you’ll find all manner of shops, galleries and the Torres García art museum. Also along here is the city’s oldest square, Plaza Matriz, with the city cathedral and the cabildo (colonial government house, now an archive and museum), along with outdoor stands selling engravings and the like.

Several blocks away at the Mercado del Puerto, a restored covered market from the 1860s, the joie de vivre of montevideanos is on full display, with eateries, drinkings spots, and shops both inside and out. It’s just the place to try a classic parrillada (barbecue), chivito (tasty steak sandwich with mozzarella, tomatoes, and olives, among other things), and medio y medio (white wine mixed with sparkling wine). Old Town is full of plenty of other dining options, as well, including a new wave of sophisticated restaurants that are remaking Montevideo’s reputation as a foodie destination.

After taking a snapshot of the grandiose 1904 Legislative Palace, time to continue along the waterfront Rambla to take in the Art Deco buildings, then after Bulevar General Artigas we start getting to some of the posher neigbourhoods, like Punta Carretas and Pocitos, filled with parrilla restaurants and entertainment spots. And as long as we’re in the area, why not take a dip at Playa Ramírez, one of Montevideo’s various beaches.

On the way back, take a swing through romantic Parque Rodó before heading back into Ciudad Vieja for stops at several charming squares, Plaza Zabala, Plaza de Cagancha (with Uruguay’s “kilometre zero”), and Plaza Independencia, where you’ll find the Teatro Solís, the country’s oldest theatre (1856), its facade adorned with a sun which inspired the imagery on the national flag. Also nearby is the Cementerio Central, which in the tradition of Buenos Aires’ Recoletos and Paris’ Père Lachaise is not only the resting place of some of the country’s most prominent personages but also represents a marvelous collection of architecture and sculpture.

The nights tend to be lively in Montevideo, as the streets of the Old Town are full of boliches, as they call pubs here. And don’t worry, this time they do like stuff a bit stronger than mate. 🙂

Montevideo has around 1.3 million inhabitants (1.7 million in the greater metro area).

The climate is a mild subtropical one, its winters humid, overcast, and windy with average temperatures 7° to 16° Celsius (45-61° Fahrenheit) and summers that are warm but not excessively so, with temperatures 16-28° C (61-83° F).

The currency is the Uruguayan peso.