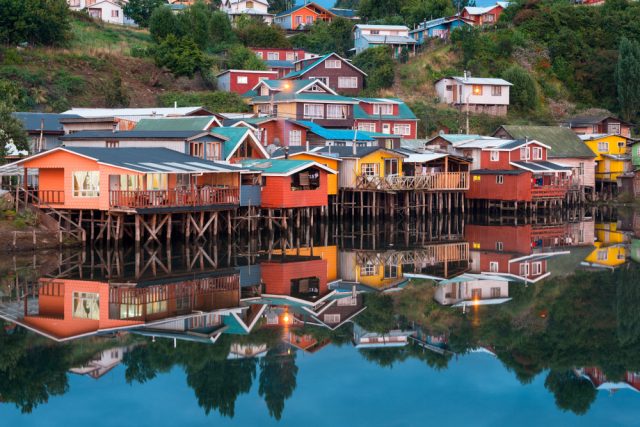 In the Chile Lakes Region on the south-central coast just under two hours by air from capital Santiago, lies the Chiloé Archipelago, its largest island one of this fascinating country’s most fascinating destinations – a mix of wild nature and mountainous interior, pristine beaches, and distinctive architecture (including more than 150 historic wood churches) that’s like taking a time machine back a century. And while cattle ranching, farming, and fishing still form the backbone of many chilotes‘ (locals’) livelihoods, tourism is on the rise and more and more visitors are discovering these islands’ rough-hewn charm.
The archipelago’s main island, Isla Grande de Chiloé, is home to the largest of the archipelago’s ten  towns, Castro (pop. 40,000) on its east coast, and it like all of theme exudes a jumbled, faded charisma, with their low-slung houses of wood and various other materials – colourfully and cheerfully painted to counter the often grey, dreary weather hereabouts. These are particularly noticeable in the palafitos of Castro, houses on stilts over the water; other landmarks include the 18th-century Spanish colonial fortress of San Antonio in the town of Ancud.

And to get to know the locals a bit, on our visit we based ourselves in the tiny, sleepy town of Cucao, on the shores of the eponymous lake, and right at the entrance to Chiloé National Park. There we were hosted at the farmhouse of a rather hardbitten, taciturn lady named Silvia, who nonetheless at night regaled us with some of the islands’ fantastic local legends, such as El Caleuche, a ghost ship manned by witches who hold nightly gatherings. The lights from the ship have enticed unwary sailors, who then become enslaved by the witches. They were also said to have shady dealings with some chilotes, and that’s why historically those locals who are a bit more well off have tended to be looked upon with suspicion by their neighbours. 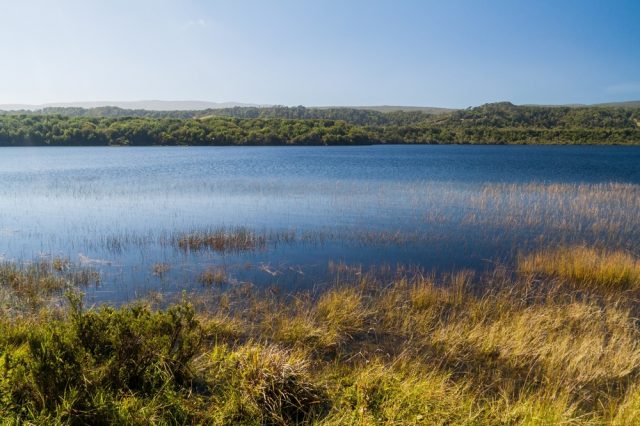 For nature and adventure lovers, this archipelago and especially the “Big Island” are a particular delight.  One example is the hike we did from Cucao to the wild, remote Cole-Cole Beach outside the village of Quinchao, accessible only via this trail or by boat. We left our farmhouse at 8 am and walked for hours in the rain through dramatic countryside, along the way encountering other small villages; long, vacant beaches; dense forests; and narrow trails carved into green hills.

Meanwhile, the Parque Nacional de Chiloé on the island’s west coast offers more dramatic landscapes, including sand-dune-backed beaches, Valdivian rain forest (an ecosystem particular to Chile and part of neighbouring Argentina, characterised by lots of everygreens – some endemic to this region –  myrtles, ferns, and bamboo), and even an islet called Metalqui, home to a large colony of sea lions.

Another marvelous is the penguin colony at Puñihuil, some 30 kilometres (miles) southwest of Ancud – a beach and handful of islets that are nesting grounds for two species which normally aren’t found together, Humboldt and Magellanic. Visitors may also kayak along this stretch of coast, along the way spotting whales and dolphins. 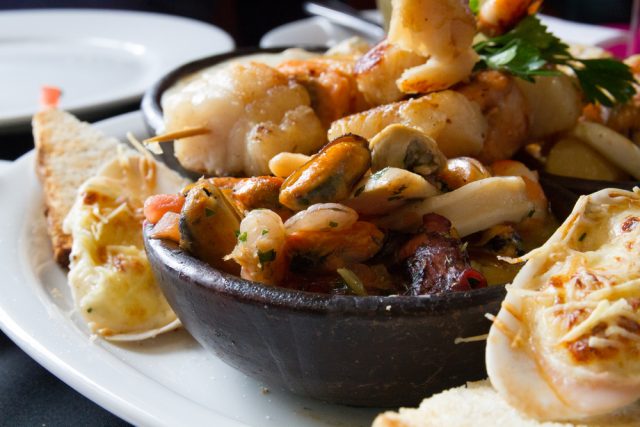 Apart from the usual tasty fare found throughout Chile, there are a handful of local specialities, foremost among them curanto (above). A hearty stew of fish, shellfish, potatoes, meats, sausages, and vegetables, it dates back thousands of years and is most authentically prepared in a hole in the ground, cooked by red-hot stones and covered with large leaves of the local pangue plant.

So while, this long, narrow country at the bottom of South America is home to an amazing diversity of landscapes and experiences, this archipelago and its Big Island stand out as one of its more memorable. Definitely worth a visit to make memories of your own.