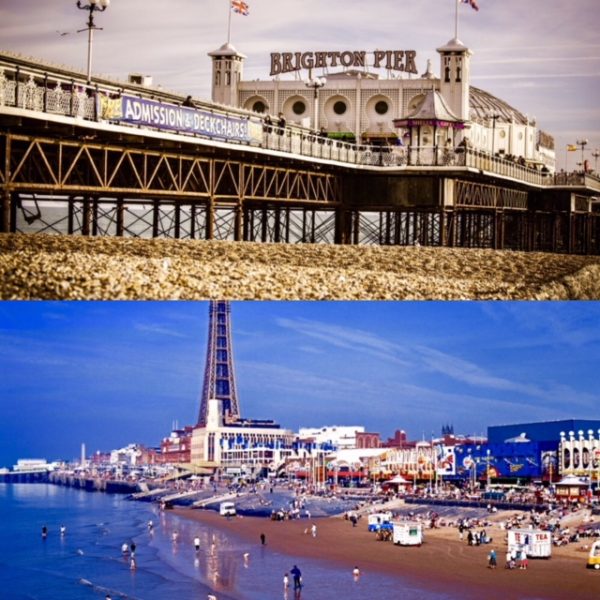 Nothing says “summer” in Britain as much as a jaunt to the classic seaside resort cities beloved of many generations of Brits – and after a few years on the skids, now seeing a bit of a renaissance. Brighton, down on the English Channel coast and Blackpool, up north between Liverpool/Manchester and the Lake District, have become a funky mix of old-timey and hip that are now charming new generations of Brits and overseas visitors alike (not to mention a favourite venues of British political party conferences).

Down on the East Sussex coast just an hour by car/train/bus south of London, this area was populated as far back as the Bronze Age, and in the Dark Ages was recorded as the town of Brighthelmstone. But much of what we see now in this city of 290,000 dates from the Victorian era, when Brighton became extremely popular as a sea-bathing and then general tourist destination, with many of its most iconic landmarks built during this period, such as Brighton Palace Pier (1899, top left), a mix of amusement rides, games, food/novelty vendors, and other attractions.

The broad beach here is of course the traditional core of Brighton’s allure, and another key local landmark is the Royal Pavilion, the palace of the Prince of Wales finished in 1823 with a flourish of domes and minarets characteristic of the style of the British Raj in India; these days its sumptuous public spaces and Regency garden are a popular attraction for visitors. Another is the lordly, mid-18th-century Preston Manor, while interesting museums include the Brighton Museum & Art Gallery, the Booth Museum of Natural History, the Brighton Toy and Model Museum, and the Brighton Fishing Museum.

For an excellent feed or three, there are some 400 diverse restaurants (a number of fetching options can be found amidst the galleries and shops (especially antiques) along the collection of narrow lanes called, well, The Lanes. And beyond the traditional attractions, the vibe here has become quite progressive (it’s the only British city with a Green Party member of Parliament), reflected in its brilliant music and nightlife landscape as well as the fact that the Brighton LGBTQ scene is one of the best and most vibrant in the country – it’s even been dubbed Britain’s gay capital.

Up in Lancashire, the sandy, eleven-kilometre (seven-mile) beach of this town of now some 140,000 also became a draw for the well-heeled of cities like London (a bit over four hours away) and especially Manchester (an hour) and Liverpool (a bit over an hour). Changing times and tastes by the late 20th century had led to Blackpool’s decline and perception as “old fashioned”, but a renaissance in the early 21st brought new dynamism and popularity back as a domestic tourist destination – though it still very much retains its “working-class” feel.

Along the beach and waterfront promenade, Blackpool like Brighton has a handful of amusement piers (three, to be precise, one including a Ferris wheel and another a theme park), along with the landmark Blackpool Tower (inaugurated in 1894, inspired by the Eiffel Tower and these days featuring attractions such as indoor mini golf and the Blackpool Town Dungeon, an elaborate, often tongue-in-cheek “haunted house” complex with a hair-raising drop ride) and Pleasure Beach, a full-blown amusement park with 38 rides. Also along the promenade you’ll find a cool aquarium called Sea Life, showcasing a thousand aquatic species; Madame Tussaud’s waxworks,  which just opened a Marvel superheroes section; and an arcade called Mr. T’s Amusements.

It pretty much goes without saying that there’;s a huge nightlife scene in Blackpool, as well, with one especially prominent complex being the Winter Gardens, featuring a dozen venues (including bars, clubs, Britain’s largest theatre, and a convention space that’s also hosted meetings of most of Britain’s major political parties among other gatherings).

On a more historical/cultural note in the area, check out the vintage Heritage Trams (some up to 80 years old); a local history museum called the Lytham Heritage Centre; a handsome 18th-century Georgian manse called Lytham Hall; the early-19th-century Lytham Windmill; and the contemporary works at Grundy Art Gallery and Fylde Gallery.

Blackpool, too, boasts a thriving LGBTQ scene, and in fact it’s been dubbed “the gay capital of the North.” And the cool vibe continues once summer is over, too – come during the fall, for example, to marvel at the Blackpool Illuminations in September and October  (the 31 August kickoff for this year’s 139th edition will be headlined by Britney Spears!)