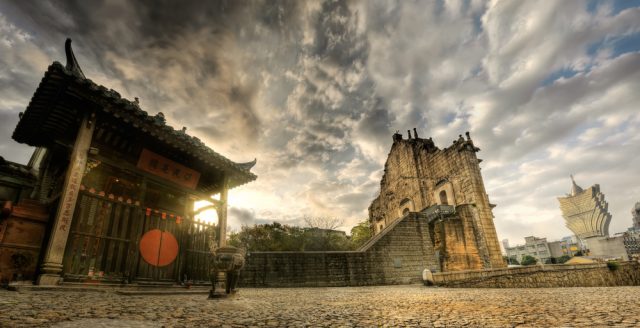 The year 1999 was notable among other things for the handover back to China from Great Britain of the bustling, dynamic colony of Hong Kong. But less heralded that year was another colony handover to China. Founded around 1557, subtropical Macau was ruled by Portugal for 442 years, and though since 1999 it’s changed quite a bit, this much smaller (30.5-square-kilometre/12-sq.-mile) enclave on a narrow peninsula and pair of islands – also in the South-China province of Guandong, an hourlong ferry ride across from the Pearl River Delta from HK – is much less familiar to non-Chinese. But it still affords an extraordinary mélange of Asian and Western, historic and cutting-edge. Come with me, won’t you, for a quick taste…

Founded in the mid-16th century, Macau’s current population of around 602,000 is a mix of Cantonese and Macanese (aka criulos), themselves a mix of Chinese and Portuguese, often sprinkled with Indian, Japanese, Malay, and Sinhalese (from Ceylon, now Sri Lanka).  Like Hong Kong, it’s a “special administrative region” part of “one country, two systems”, with some degree of local (albeit still essentially undemocratic) rule, and its own currency, the pataca, judicial system, and other aspects significantly different to mainland China’s. The tasty local cuisine is a mix of Chinese, Portuguese, and Macanese, a fusion of the two, while Macau’s Cantonese/Portuguese patois has all but died out. 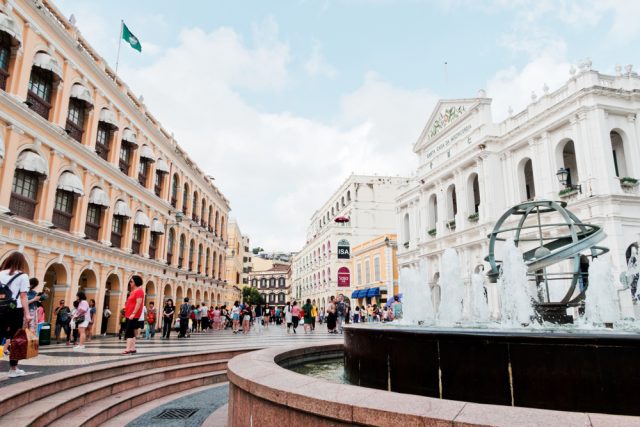 The areas of most interest to visitors are fairly compact, so a lot can be seen by scooter or even on foot. You’ll be spending most of your time on Macau Peninsula, considerable swaths of which have been more visible than that in Hong Kong. The place to start is Largo do Senado, the black-and-white-tiled square dominated by the 18th-century Senate building, still used by the regional government. Catholic churches worth a gander include 16th-century São Domingo and São Lorenço, as well as 17th-century São Paulo Cathedral – though of this last only the soaring façade (below) remains all these years since a 19th-century fire. For a bit more history plus some of the best views out over the territory, head uphill to the 17th-century Guía Fortress and Monte Fortress. 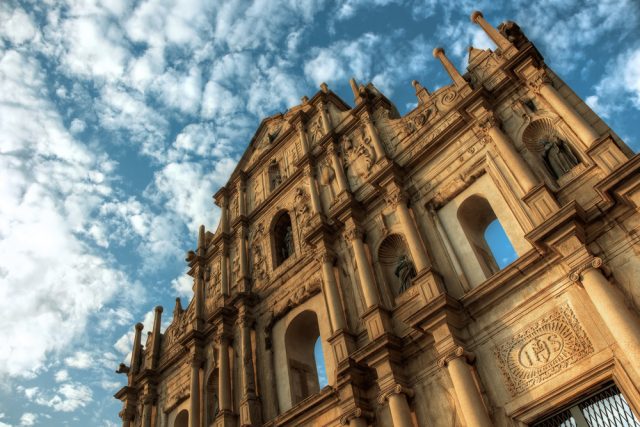 Beyond all that, there are also a handful of museums worth a look, most notably the 20-year-old Museum of Macau, near the Monte Fortress, providing a good overview of the territory’s history and culture; the distinctively designed, five-floor Macau Museum of Art, with a mix of Asian and Western works, along with  a collection of ancient Cantonese artifacts; and the 21-year-old Maritime Museum, showcasing seagoing history covering East Asia and Portugal.

By the way, if you’re interested in mixing local colour with some cool shopping, check out Rúa da Tercena, behind Largo do Senado, a bustling street lined with myriad art/antiques shops and flea markets.

And one new peninsula landmark (built in 2001) definitely worth your time is the hundred-metre (328-foot) Macau Tower, which besides the expected observation deck also offers thrills to the steel-nerved like an open-air stroll around the tower’s exterior — without handrails though with a tether; the world’s highest bungee jump; a tethered climb all the way up the tower on a ladder; and a non-freefall descent on a bungee cord all the way back to the ground. 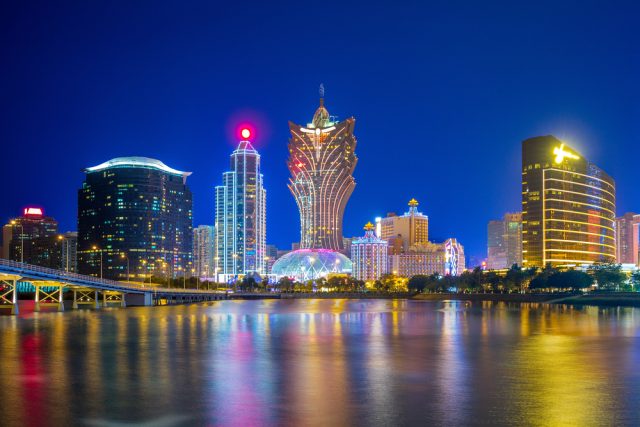 Speaking of new, the other, more modern – and these days, most popular – allure of Macau, is the one that’s been booming since the opening up of casino licenses refashioned it into “the Las Vegas of the Orient”. It’s showcased on the reclaimed 5.2-square-kilometre (two-sq.-mile) swath of land called Cotai, where the venerable (founded in 1970) landmark Casino Lisboa is very much worth a visit to get an eyeful of the lovely Chinese antiques from the collection of owner Stanley Ho. There are also a bunch of sleazier gambling spots nearby, but Cotai has in the last decade or so been especially remade by the arrival of glitzy Vegas-style extravaganzas such as the City of Dreams, Galaxy, Grand Lisboa, MGM, Sands, Venetian (the biggest not just in Macau but the entire world), and Wynn.

Finally, for a more laid-back, rural/small town experience, head down to Taipa and Coloane, each with eponymous villages – still inhabited by some fisherfolk, and interesting with narrow lanes lined with colonial-era (largely Mediterranean-style) shops, houses, and restaurants (Taipa is especially noted for its eateries). Coloane is also the site of A-Ma Cultural Village, built in 2003 in Qing-dynasty style, as well as Macau’s two beaches, Hác Sá and Cheoc Van. Taipa, meanwhile, has the Museum of Taipa and Coloane History and Taipa-Houses Museum. For the outdoorsy, meanwhile, both islands also offer nice options for hiking and biking.

So as you can see, there’s a lot of unique history and culture here – and if you can manage to coordinate your visit with one of the various festivals throughout the year, even better! In June alone, for example, you can thrill to dragon-boat races or get a whiff of the more sedate Lotus Flower festival.

Macau is a 2½ -hour flight from Shanghai and just under 3½ from Beijing. More info: MacaoTourism.gov.mo.