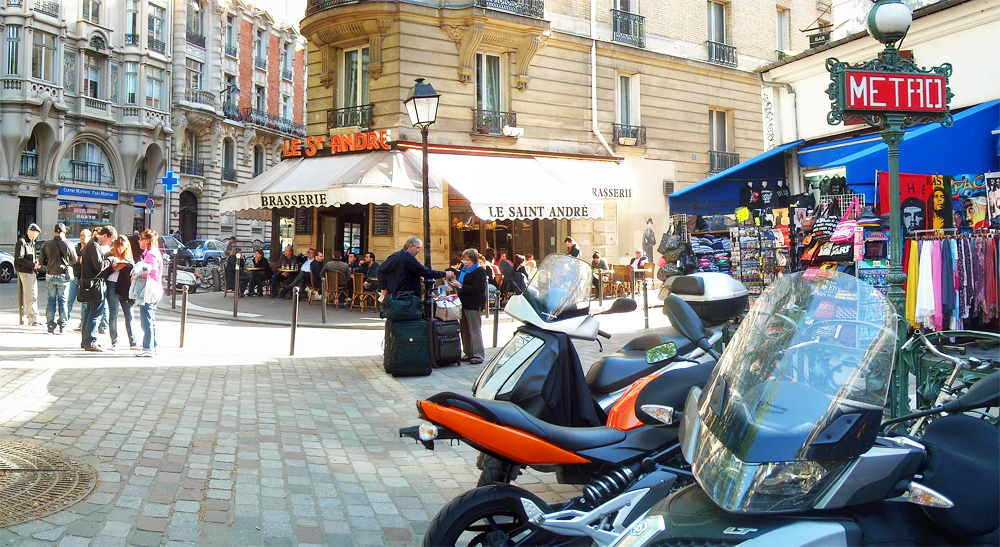 How do I love thee, Quartier Latin? Let me count the ways: Students. Chilled rosé at a sidewalk café. Students. Reveling in the Bohemian joie de vivre. Students. Chantilly-cream crêpes from a street stand. Students. Browsing fascinating museums like the Orsay and the mediaeval Cluny. Students. Selecting exquisite hand-crafted bonbons in a side-street chocolatier.  Students.

Repetitive? Well, not too surprising, really: on the Left Bank of the Seine, home to not just the University of the Sorbonne but to at least a half-dozen more institutions of higher learning, it’s these, ahem,  studious youngsters who truly bring this patch of Paris’ 5th and 6th arrondissements to vibrant life. And while the city as a whole is famously sophisticated and bourgeois—and correspondingly pricey—it’s also thanks to young people that the Latin Quarter is the most affordable of areas popular with tourists.

The Quarter’s name dates back to the 13th century, a time when Latin was pretty much the universal academic language of Europe, and therefore of the Sorbonne, its main building on a lovely plaza graced with fountains and chattering twentysomethings. 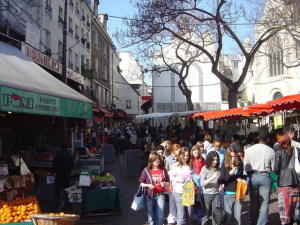 Before them, these streets and plazas were trod by intellectuals such as Ernest Hemingway, Simone de Beauvoir and Jean-Paul Sartre—and of course let’s not forget the students who battled police during the tumultuous weeks of strikes and civil unrest in May 1968. As a visitor, you’ll never tire of strolling amid the bookshops, clothing boutiques, and cafés of the Quarter’s main boulevards, Saint-Germain and Saint-Michel, the majestic fruits of the gentrification masterminded by Baron Haussmann in the 19th century.

Make your way through the Marché Mouffetard, a little street market that adds some wonderfully colourful notes to the Quarter. Sit a spell (if you can find a spot) at the grandiose fountain of the Place Saint-Michel, depicting the Archangel Michael vanquishing Satan, and perhaps pop into one of the neighbouring bars. A spot of coffee? Sip it at the reknowned Art Deco Café du Flore (172 Boulevard Saint-Germain). Peckish for a crêpe? Look for stands or establishments with lines, or try Paradis (64 Rue Mouffetard) or Crêperie de Cluny (20 Rue de la Harpe).

As for sights and things to do, many places you go hereabouts you’ll spot the unmistakable neoclassical cupula of the Panthéon, the huge, grand mausoleum where you can pay your respects to some of France’s greatest of greats, including Voltaire, Marat, Jean Monnet, Victor Hugo and Marie Curie (the only woman). Explore the Sainte-Geneviève Library, housing the exquisite collection of a famous demolished abbey, and the nearby church of Saint-Étienne du Mont, housing the shrine of the library’s namesake, St. Geneviève, the patron saint of Paris.

Here and there you’ll come across little cobblestone streets that managed to escape the tender mercies of Baron Haussman, as well as impressive open spaces such as the stately Luxembourg Gardens, which besides formal gardens is home to sundry statuary, fountains, a café, performance and exhibition spaces, and most notably the Senate of the French republic. During the course of your day you’ll also want to work in a visit to at least one of the Quarter’s distinguished museums such as the Orsay, the Museum of the Middle Ages (aka the Cluny), the Musée Curie, or the Arab World Institute, this last an 11-storey, modern glass block with a terrace affording some fab free views over Notre Dame cathedral and the cityscape of central Paris.

And once night falls, of course, around here it’s all about students, beer, students, wine, students, cocktails…and so on into the wee hours. Maybe not too surprisingly, beaucoup de students but not nearly as much studying.