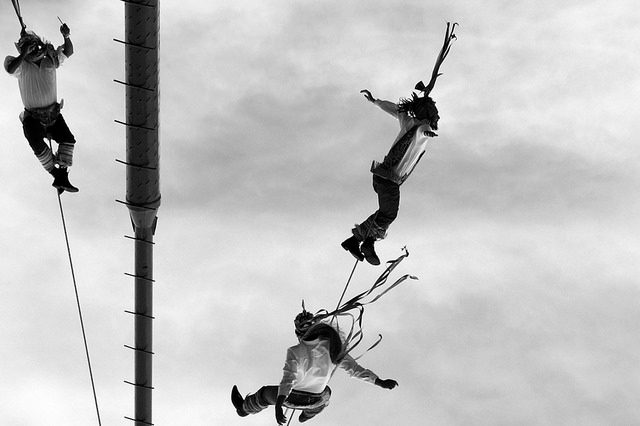 They fly through the air with the greatest of ease, these Totonac “bird men” re-enacting ancestral traditions in their home town of Papantla, located on forested hills a four-hour drive or one-hour flight from Mexico City in this country’s northern Totonacapán region of Veracruz state (it’s four hours by bus from the city of Veracruz). It’s truly a great show – and furthermore a true slice of authentic Mexican culture with pre-Hispanic origins dating back to 600 AD.

This Danza de los Voladores (Dance of the Flyers) originated with the Nahua, Huastec, and Otomí peoples of what is today central Mexico and spread throughout Mesoamerica. These days, the Totonac remain its main practitioners, and 90 percent are to be found in this city of 153,000, which before it was founded by the Totonac was a site of the ancient Olmec and Huastec civilisations (the impressive ruins of El Tajín nearby are thought to have been the work of the Huastec).

This ancient ritual stemmed from the need the ancient Totonac felt to appease their gods and in particular beg forgiveness for any perceived offense given, resulting in a period of prolonged drought. Every Saturday in front of the city’s Church of Our Lady of the Assumption, after a ceremonial dance on the ground, five young men attired in red trousers, white shirts, and flower-adorned hats ascend a wooden pole – 30 metres (98 feet) high and a mere 25 centimetres (one foot) in circumference – all the better to better approach the celestial gods.

There’s a small platform up there, where one of the men dances and plays the flute and drum (representing birdsong and the voice of the gods, respectively) while the other four – representing the four cardinal directions – leap into the air, tied by ropes around the waist, to simulate the falling rays of the sun and drops of rain, winding out and finally ending up back on the ground. The purpose of the exercise is to pay homage to the sun god in particular and seek the approval of the gods in general.

(By the way, if you’re unable to make your way to Papantla, similar spectacles are staged at Mexico City‘s Chapultepec Park, the ruins of Teotihuacán outside Mexico City, and the Riviera Maya attractions Xcaret and Xel-Ha; they’re also performed at various festivals and special occasions throughout Mexico.)

Founded in 1230, Papantla is also a worthwhile destination in its own right, where it’s not uncommon to see locals in traditional dress, as well as attractions beyond the El Tajín ruins such as the Centre of Indigenous Arts, (including plenty of context about the Dance of the Flyers) and the Mural Cultural Totonaca depicts the clash between modern and traditional life, with images of the old gods as well as the pyramids of El Tajín alongside oil rigs and farm machinery. You’ll also see lots of places selling vanilla-derived products such as the local liqueur Xanath, as this region is where vanilla originally comes from, and you can arrange visits to local vanilla growers; unsurprisingly, there’s also a big vanilla festival here, which runs during the Catholic celebration of Corpus Christi (this year, 31 May, in 2019, 20 June).