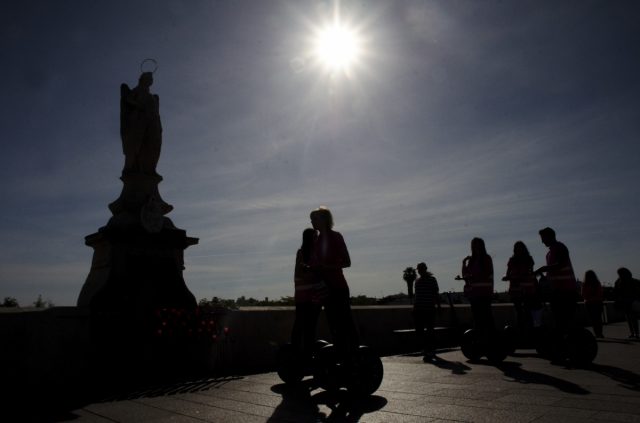 I’d been to this ancient city on the Guadalquivir River – just over a couple of hours from my home in Jaén province’s Cazorla region – a number of times, soaking up the whitewashed mediaeval atmosphere of its Judería (Jewish quarter); the awe-inspiring forest of Islamic striped arches inside the Gran Mezquita (Great Mosque), hybridised shortly after Córdoba‘s recoqnuest from the Moors in 1326 into the city’s Roman Catholic cathedral; and the impressive Moorish ruins of Medina Azahara.

But it’s the first time I’d navigated these narrow, winding cobblestone streets and lanes on that new-fangled contraption called the Segway, and on a recent visit with my husband and two of our sons, I discovered it was a whole new experience.

When we got to the tour operator and were allotted our machines, my men hopped on and in no time had them under control. I, not so much.My driving skills have always been pretty good, I still ride a bike at times, but mastering the Segway stop didn’t come naturally to me – my version was teetering balance that by no definition was controlled. Hence the odd hand-grabbing or hand-stilling from one of my kids or another a third party, especially at the crossings.

Our guide must have realised I wasn’t going to improve much more, so off we bumped. Over cobblestones between and around a throng of Japanese tourists and into a wider space around the Mezquita. Most people smiled at me and moved out of my way – being older has some advantages! 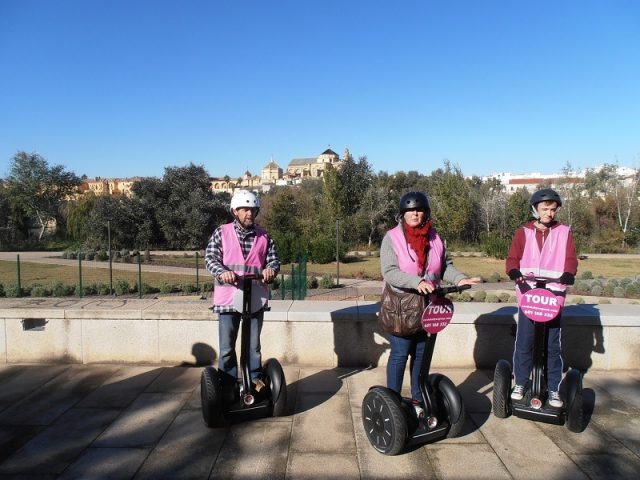 Along the way, I found that I slipped – more happily than I would’ve thought – into being told where to go, how fast to go, what to look at, and when to stop (this last was the trickiest, as stepping backwards off the machine is not allowed).

And so I happily poottled along – usually bringing up the rear – over the stone San Rafael Bridge (finished in 1953), then along the Guadalquivir opposite the mediaeval quarter, past the mostly Moorish Calahorra Tower, the city’s oldest remaining defensive structure,  and across the Puente Romano (though what we see today is also Moorish, built on the ruins of the actual 1st-century Roman Bridge).

Passing over this bridge – nine metres wide and 247 long (9½ by 810 feet), it’s hard to imagine that oceangoing ships once navigated this now largely silted-up flow. From the bridge we glimpsed the Alcázar fortress (built in 1238 after the reconquest of the city from the Moors two years earlier) and the Mezquita (realising anew just how enormous it is). Returning to home base, we passed both, headed back into the warren of narrow lanes and tiny, flower-bedecked patios.

Wow. This was not merely my first Segway jaunt, but also my first guided tour of Old Córdoba, and I found myself surprised just how much I enjoyed both not being in charge and how informative it was. As for this new-fangled contraption, it’s not like riding a bike, for sure, but just as fun, and I’ll definitely go on another spin in another city if given the chance!

Rachel Webb has lived in Jaén province since moving from her native England with her husband and sons in 1996. When she’s not drinking Earl Grey tea or Spanish wine on her patio, she can be found exploring Spain and writing about it on her blogs Andalucia Explorer and Luxury Spain Travel while visiting boutique hotels to add to her portfolio Only Spain Boutique Hotels.