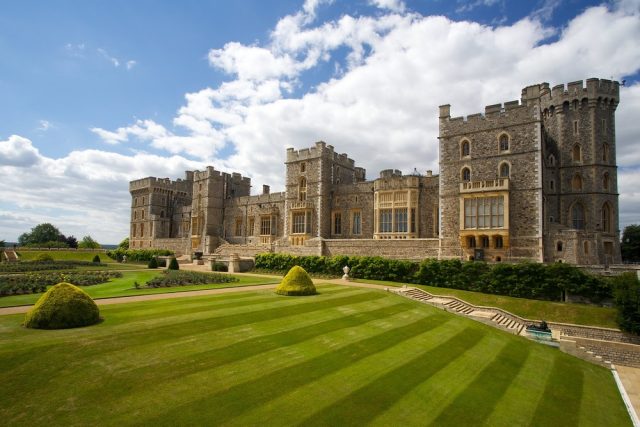 Just about an hour by car or train east of London, this city of just over 32,000 has a history stretching back to at least the 7th century. Windsor’s historic core is a charming olde Englishe market town, but there’s no question the main attraction by far is Windsor Castle, the United Kingdom’s oldest royal residence (not to mention the world’s oldest continually inhabited one), built under William the Conquerer after the Norman conquest of 1066.

Though Queen Elizabeth, Prince Charles, and other members of Great Britain’s royal family still regularly occupy the premises (it’s one of the queen’s favourite weekend getaways), you and I can join the million of other peasants per year allowed to tour significant areas of the castle for a mere £21 (regular adult admission; that’s currently about 24 euros/28USD; discounts available). Regular tours were on hold this weekend, however, because of the royals’ latest “fairytale wedding” – the social event of the year not just for Brits but for millions in Europe and beyond. 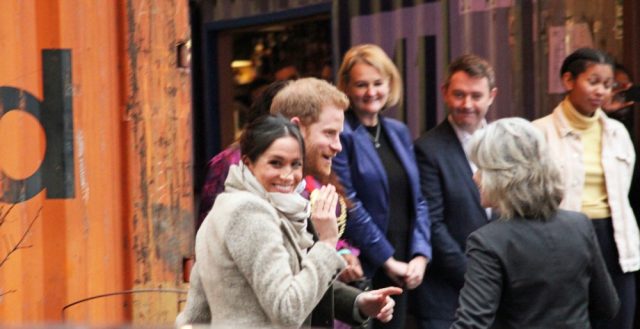 The nuptials of Prince Harry and U.S. TV starlet Meghan Markle will take place tomorrow at noon in St. George’s Chapel, where Harry was baptised and ten rulers are buried, including the notorious Henry VIII. Plans besides the ceremony, conducted by the Archbishop of Canterbury, include lunch for hundreds of guests hosted by the queen; a carriage ride through the town to greet expected crowds; and a smallish dinner hosted by the Prince of Wales.
As for your own visit to the castle, you may be especially interested in the wedding venue itself, St. George’s Chapel; dating back to 1475, despite the unassuming “chapel” it’s a grandioseof Britain’s finest Gothic landmarks (and I found myself especially in awe of its soaring stone ceiling, below). Other highlights include reception and state rooms and apartments; a priceless collection of period pieces and artwork including some by Europe’s most distinguished Old Masters; and of course the changing of the guard. (By the way, kids and adults alike may also be especially charmed by Queen Mary’s Dolls’ House, built in the 1920s for the wife of King George V, with remarkable scale models of furniture, carpeting, and other items depicting life in the early 20th century.) 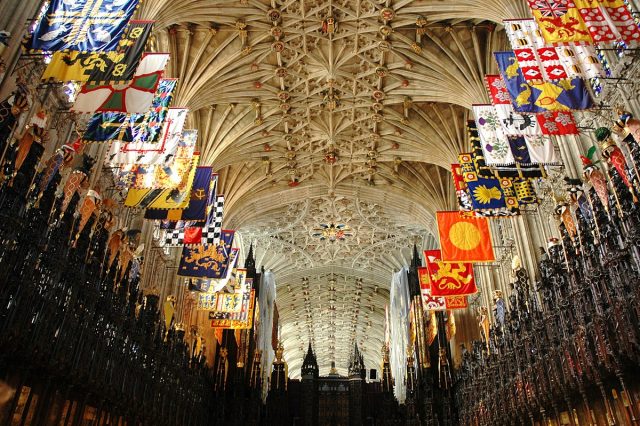 Some day trippers out of London do the castle (depending on how much you see, it can take up to five to six hours) and call it a day, but there’s more than enough in and around Windsor to merit an overnight and even more. There are several scenic strolls, including the Dorney Circular Walk, Great Park Walk, Queen Anne’s Ride, and the scenic half-hour stroll along the River Thames to the cute little town of Datchet.

In and around the quaint downtown, with plenty of attractive shopping and dining, you’ll want to take in sites such as Sir Christopher Wren’s gracious, late-17th-century Guildhall (below), the former town hall now housing the Royal Borough Museum and otherwise used mostly for ceremonial occasions, especially weddings (including that of Charles to Camilla Parker Bowles and in 2005 one of Britain’s first same-sex civil-partnership ceremonies, involving some chap named Elton John). Others include also late-17th-century “Crooked House” and the 1820s Windsor Parish Church of St. John the Baptist. A short hop outside town, there’s the stunning 1440s Tudor manor house and gardens Dorney Court in the village of Dorney; the meadow at Runnymeade, with various memorials including one to the legendary Magna Carta, which in 1215 became a landmark in protecting liberty against despotic monarchy; and just across the Thames from it, the the millennia-old Ankerwycke Yew tree, another important symbol of liberty near the picturesque ruins of 12-century St. Mary’s Priory. 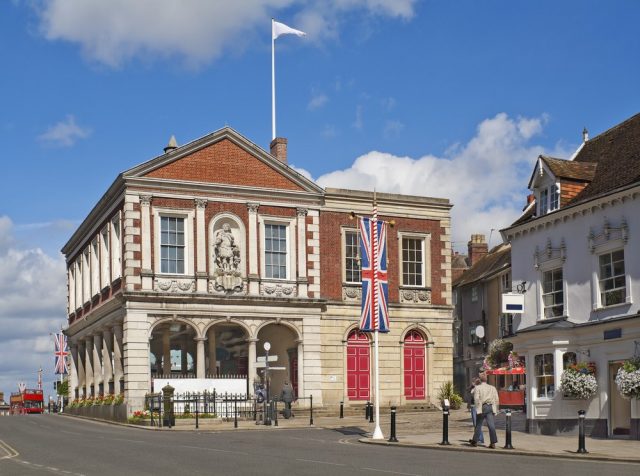 And right across the River Thames, connected by Windsor Bridge, don’t forget the smaller city of Eton, dominated by Eton College, the storied boys’ boarding school founded in 1442 by King George VI, where centuries of royals, aristocrats, and other movers and shakers have their education (whilst at Eton, Harry regularly crossed the Thames to have tea and such with his gran); you can tour the campus from May to early September.

Finally, families may also want to make time for Legoland, the world’s second after the original in Denmark), with rides and attractions geared to youngster up to 12.

Several train lines serve this area; the most direct takes 53 minutes from London’s Waterloo Station. Trains leave every half hour, then it’s a five-minute walk to the castle. It’s also about an hour by coach, and a bit more by car (parking is not permitted near the castle, so be prepared to park in town).

At the beginning of the 17th century, William Shakespeare the Bard set his comedy The Merry Wives of Windsor in this very town – and very soon Meghan will become another of those (hopefully) merry wives. As Falstaff says in scene three, “sail like my pinnace to these golden shores”, and experience the place where it all happened!

Based in Hollywood, Florida, Marcia Levin is a longtime travel writer who specialises in topics of interest to seniors and cruise fans. A past president of the Society of American Travel Writers, her work has recently appeared in AAA Living, Porthole magazine, and numerous websites such as NeverStopTraveling.com.