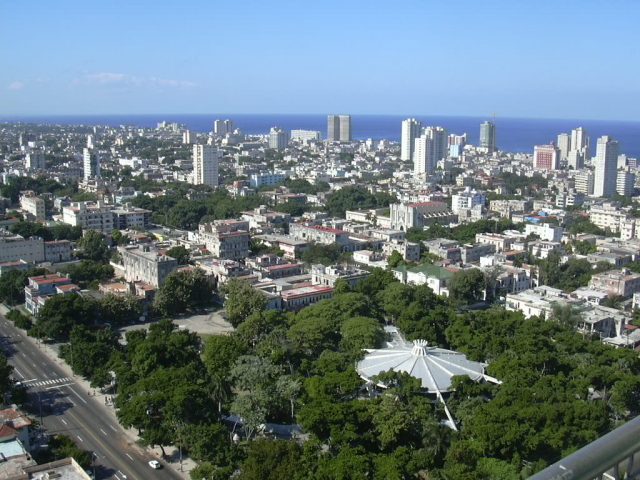 Though mostly shabby and decrepit except for its UNESCO World Heritage colonial core, Habana Vieja, being restored for the tourism trade with the help of the Spanish government, the European Union, and other international donors, the capital of Cuba is truly one of the more remarkable cities in all the world, as millions of new visitors have been discovering each year since the régime started increasingly opening up the island to visitors in the years following the 1991 collapse of its geopolitical patron, the Soviet Union. Furthermore, Old Havana is just the smallest part of this sprawling city, and I’m here today to introduce you to the allures of another of its distinguished neighbourhoods, El Vedado. 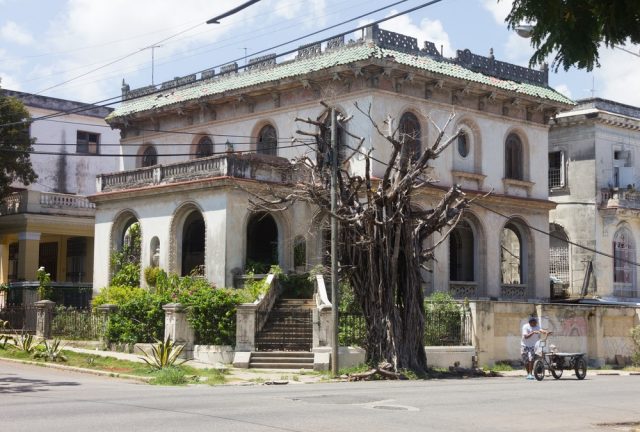 The Spanish word vedado means “closed off” or “forbidden”, and that’s what this forested swath of territory mostly was during the colonial period, when it was a military buffer zone. After Cuban independence from Spain in 1898, wealthy Cubans started building manses and villas here large and small, and many of these early-20th-century, mostly neoclassical Republican gems such as the one above still line the leafy streets here, joined as the century wore on by more modern additions up till the time of the 1959 Revolution.

Some of the blocks of El Vedado alongside and close to the sea also became the site of a number of grand hotels, resorts, and casinos – such as the Hotel Nacional de Cuba, the Havana Hilton (since the early 1960s rebranded as the Habana Libre), the Capri, and the Riviera – which were the glamourous focal point of the increasingly booming tourist trade from the United States in the 1930s through 1950s (many patronised by Hollywood A-listers and international political heavyweights, and not a few also notoriously entwined with the American Mafia, especially the Riviera, owned by gangster Mayer Lansky). 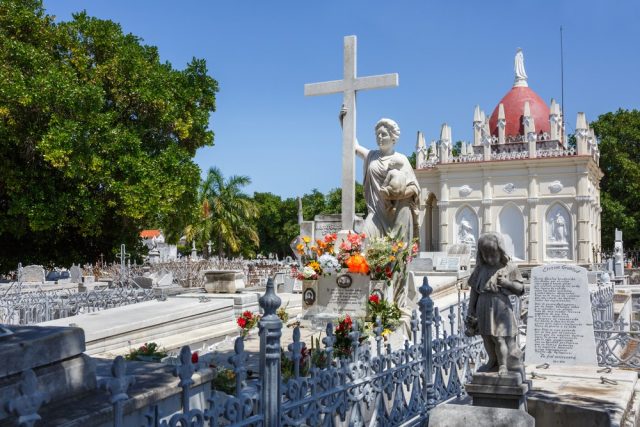 The Cementerio Colón, named after Christopher Colombus (Cristóbal Colón in Spanish) dates from 1876, when Spain still ruled, and is the resting place of many of the great and good of Cuban society from then through much of the 20th century. Much like Père Lachaise in Paris and Recoletos in Buenos Aires, this 57 hectares (140 acres) is an amazing open-air museum of some 500 beautiful paragons of sculpture and architecture, with highlights including a spectacular monument to heroic firemen who gave their lives fighting a massive 1890 conflagration; another commemorating sailors who perished in the 1898 explosion that sank the Maine warship and served as a pretext for the Cuban-American War which culminated in the island’s independence; and the tomb of Amalia (above), a bittersweet focus of visits by women who are expecting or hope to be.

Heading up the street called La Rampa from the Malecón, Havana’s waterfront promenade, you’ll arrive at the iconic Yara Cinema and the Habana Libre hotel (an intersection that’s also a well known open-air hangout for the Havana gay community). Across from them, what looks like a leafy park (the green bit in the photo at top) is actually the home of one of the Americas’ most famous ice cream parlours, Coppelia. The main building, a swooping mid-century Deco affair, is for a change the only place in Cuba open to Cubans and closed to foreigners instead of the other way around. But we gringos can sample several flavours of its famous frosty treats at a smaller stand a few steps away. If you’ve seen or heard of the 1994 gay-themed film classic Fresa y Chocolate (Strawberry and Chocolate), this is a central location.

Named after the firm which constructed it, this massive feat of civil engineering  (and to this day one of Latin America‘s largest concrete structures) was built in 1956 for a radio/TV network and houses nearly 400 flats as well as ground-floor shops and other businesses. Most notably for visitors, on the 33rd floor there’s a fancy international-cuisine restaurant, La Torre, with some of the most sweeping views available of the Havana cityscape (but if you don’t want to shell out for a pricey meal, you get the same views for the cost of a mojito or Bucanero beer at the bar!).

“Friendship House” on the broad boulevard called Avenida Paseo (aka Avenida de los Presidentes) is a pink mansion that’s the fruit of a scandalous love affair between famed beauty Catalina Lasa, and landowner Juan Pedro Baró. Though she was engaged to another man, they eloped, and he had this manse built this for her in her favourite colour. These days it’s a romantic restaurant with charming gardens and outdoor seating, much favoured by Cubans for special occasions such as quinces (Sweet-Sixteen parties), as well as a great spot for a variety of live music, from old-timey Cuban boleros to rock and roll (and you might even spot the ghost of Catalina, who died here relatively young of an illness).

Also known as Almendares Park thanks to its location on the Almendares River, this 700-hectare (1,730-acre) spread is the city’s only urban forest, designed in the 1920s by the Frenchman responsible for the Eiffel Tower’s Champs-de-Mars gardens and Barcelona‘s Parc de la Ciutadella. (as well as this city’s own Paseo del Prado, Parque Central, and the University of Havana‘s main-campus steps). With giant trees and bosky corners, it’s centred on an amphitheatre which when not hosting concerts is quite popular as a locals’ hangout. 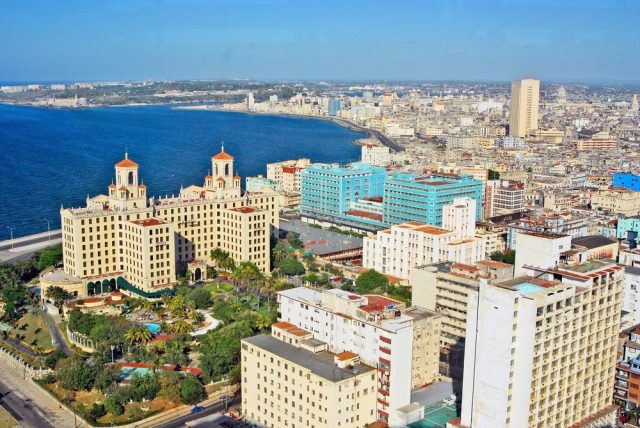 On a hilltop overlooking the Malecón and the Caribbean, El Vedado’s most distinctive and grandiose classic was built in 1923, designed by the famed architectural firm McKim, Mead & White, also responsible for New York City‘s Washington Square arch and other venerable U.S. landmarks.  Back in the day, the Nacional was frequented by the likes of Marlon Brando, Winston Churchill, Errol Flynn, Ava Gardner, Rita Hayworth, Cuba resident Ernest Hemingway, and Frank Sinatra. Today you might still spot the occasional celebrity (especially during special events such as December’s international film festival) whilst savouring mojitos and cigars and listening to Buena Vista Social Club chestnuts from strolling musicians out on the romantic back patio. The overpriced dining and rooms here are nothing particularly special, but you might well want to consider an evening at the nice cabaret, offering elaborate and nostalgic stage shows.

This quirky bit of business is the labour of love of one Orestes Ferrara, housed in a 1929 neo-Florentine Renaissance manse just off Revolution Square (see below) and offers four floors dedicated to memorabilia and art relating to this gentleman’s passion, the life and times of 19th-century French emperor Napoleon Bonaparte (don’t ask). 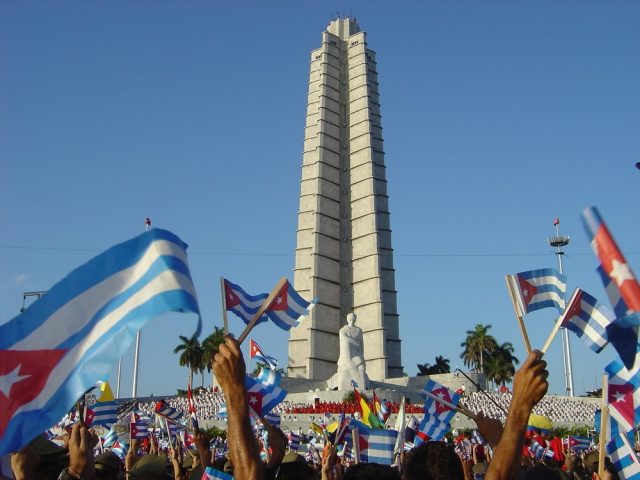 Inaugurated in 1959 as the Plaza Cívica and renamed Plaza de la Revolución after the eponymous Revolution swept away the old order at the end of that year, this 4.5 hectares (11 acres) of expanse has packed in more than a million for many of Communist Cuba’s mass events (as well as huge crowds for masses by visiting popes Francis and John Paul II). It’s dominated by a 109-metre (358-foot) tower on the north side honouring the Republic of Cuba‘s main national hero José Martí, depicted in a seated statue 18 m (59 ft.) tall. Across the square is the national interior ministry with its iconic steel-cutout mural of Communist hero Che Guevara, right next door to the Telecommunications Building with a similar homage to revolutionary Camilo Cienfuegos; other landmarks ringing the plaza include the National Library and the Palacio de la Revolución, housing Cuba’s parliament (by the way, for some smokin’ live music and packed LGBT Fridays, don’t miss the basement club Café Cantante Mi Habana, just off the square’s northeast corner).

Built in 1952 and framed by a swooping arch out front, the country’s main synagogue is the headquarters of the mostly Ashkenazi “Jewban” (Cuban Jewish) community of some 1,300, and invites visitors to its Saturday services. (Check it out in the hourlong 1995 documentary Havana Nagila – oy, mi madre, you’ll plotz!)

This cultural centre was established in 2009 in one of those graceful early-20th-century mansions to promote the cultures of ALBA, a group of Cuba allies in Latin America and the Caribbean: Antigua and Barbuda, Bolivia, Dominica, Ecuador, Grenada, Nicaragua, St. Kitts and Nevis, St. Lucia, St. Vincent and the Grenadines, and Venezuela. But these days its cultural programming is much broader. A must on the Havana cultural calendar!

In 2014,  a huge cooking-oil factory built out near the Almendares River in 1910 was brought to a newly creative boil as the quarters of the “Factory of Cuban Art” (above; widely known locally as la Fábrica de Arte or la FAC). The brainchild of popular rocker and artist X Alfonso, its multifarious gallery, performance, and partying spaces attract a hip young crowd and some transgressive art (i.e. not always toeing the régime line).

Top contenders include the Galería Latinoamericana (Calle G betwen Calles 3 and 5) and Galería Habana (Línea 460, between Calles E and F), and Galería Servando (Calle 23 at Calle 10).