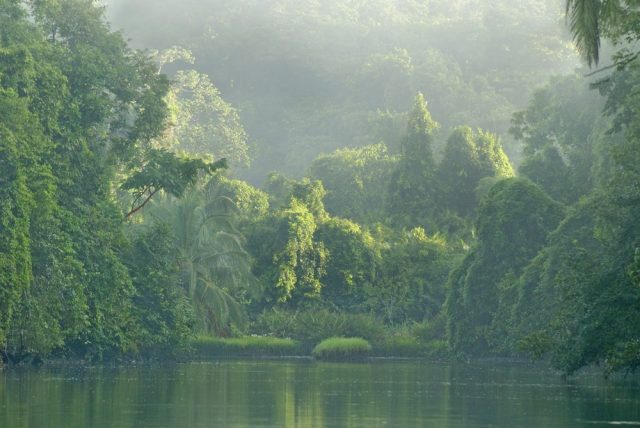 The sun had set and the stars above seemed brighter than I’ve ever seen them before. Floating in the warm waters of the Golfo Dulce, in Costa Rica‘s remote Osa Peninsula. tiny, bright green balls of light swirled around me – bioluminescent algae. Grinning uncontrollably and feeling like a twelve-year-old, I finally ran from the water and through the warm sprinklers of a nearby beach resort just off shore. It was my third time in two weeks visiting this hidden strip of beach in Puerto Jiménez, the Osa’s main town. And it was just the beginning of my discovery of how the Osa Peninsula is a truly magical place.

I was introduced to this marvelous destination by Lokal Travel, a California-based social enterprise with a focus on community tourism, connecting travelers worldwide to locally led projects through their online booking platform. 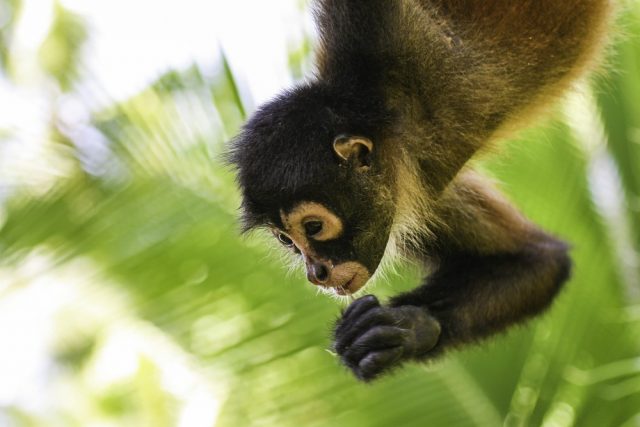 Travellers usually fly into Puerto Jimenez, with which I quickly fell in love. This small town with a population around 9,000 is filled with neighbourly love and delicious seafood. My couple of days here with lounging on golden beaches and in hammocks with a book and cocktail in hand, and in the evenings I hit several salsa joints and even a karaoke bar located along PJ‘s main drag.

Next stop was Dos Brazos de Río Tigre, a charming village just outside Corcovado National Park, since 1975 the core of the Osa’s eco-bonanza and covering a third of the peninsula. Dos Brazos’ residents historically had minimal economic opportunity except for the environmentally destructive palm oil and gold mining industries, but mining was banned with the establishment of the park and sustainable ecotourism has become a mainstay thanks to the likes of the Corcovado Foundation, which sponsored locals to become tourism guides. It was here I met Xinia and Tomás.

Xinia, my “queen of the jungle”, is a small but mighty woman whose determination to create Descanso La Pizote, a tourism project from the old cabin her mother had grown up in has sparked a new wave of eco lodging in Dos Brazos. Out in the rainforest an hour and a half from the village, the cabin sits at the edge of Corcovado. Our afternoon hike out to it – on a trail built by Xinia herself – was marked by sweaty shirts and beautiful wildlife, as we stopped to spot toucans and scarlet macaws (part of Central America’s largest population of macaws; the Osa is also home to not just more than half of Costa Rica’s abundant biodiversity but a full 2½ percent of the entire world’s).

The cabin is rustic – no electricity – but does have running water, piped in from the nearby waterfall to the sinks of the cabin, and there’s a trail leads to a beautiful lookout to watch the sunrise over the ocean in the morning. The only sounds are of millions of cicadas, and Xinia cooking up incredibly flavourful local dishes.

From her place you can access the Corcovado trail that leads you back into Dos Brazos – an eight-hour hike that is exhilarating but can also be exhausting. Our young guide Tomás made it even more thrilling with his incredible eye for spotting just about any creature lurking in the trees. Having grown up in the jungle, working with his father to mine gold, Tomás quickly learned the dos and don’ts of Corcovado. He could easily live off the land for a month or so based on his knowledge of the region. He may lack even a sixth-grade education, but he certainly has a PhD in jungle lore. I couldn’t have imagined a more memorable jungle outing, from wandering amidst spider monkeys (above) and baroque strangler trees to having a delicious lunch of gallo pinto (rice and beans), boiled eggs, and fried plantains, all wrapped up neatly in a banana leaf.

Other land and sea wildlife in this 424 square-kilometre (164-sq.-mile) park harbours 140 mammal species, 370 bird species and over 10,000 kinds of insects, such as various monkeys, tapirs, sloths, margay cats, marine turtles, and crocodiles. There are even a few endangered jaguars out here, but they’re quite elusive, and visitors are unlikely to spot them.

That evening, as I lay under mosquito netting in a comfy log cabin in town (with two and a half walls completely surrounded by rain forest), I was lulled into restful slumber listening to hundreds of nocturnal wildlife species harmonise among the trees, and the next morning came my favourite part of waking up in Costa Rica: a delicious cup of local coffee. Bringing that cup to my lips as the sun begins to warm my skin has become a lasting sensory memory that I hope to relive again and again. 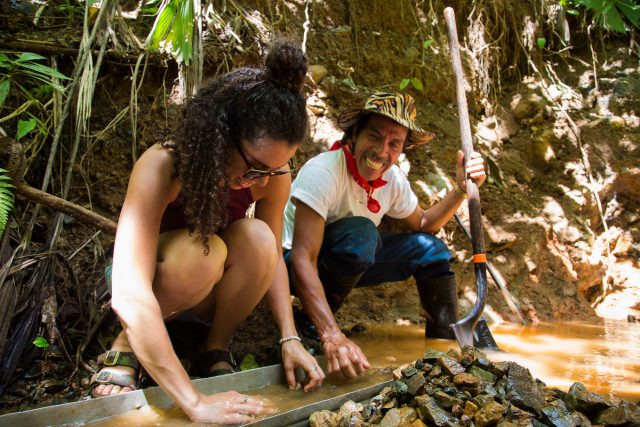 Next up was Rancho Quemado, about an hour’s drive north of Puerto Jiménez, a village which has become another of the Osa’s rural tourism and ecotourism hubs, with a tourism cooperative offering locally led tours, activities, and accommodation.

Here’s where I met Carlos Villalobos, the visionary, fortysomething owner of more than 400 hectares (1,000 acres) of conserved rainforest. After studying tourism and forestry in capital San José, he brought his knowledge back to “monetise” the rainforest to empower the community through tourism. Carlos has also been very diligent about conserving a small lagoon that separates the town from the extensive rainforest on his property and where we listened to howler monkeys roar and spotted flocks of endemic birds as we canoed its calm waters.

Sunrise the next morning led us to Juan Cubillo, also fortysomething, a gold miner-turned-tour operator who leads artisanal gold mining tours on his ranch, Finca las Minas. Since opening up his property to tourism, Juan has been able to walk away from mining and focus on sharing the heritage of the Osa by providing hands-on experiences for visitors. I was in awe of the intensity and backbreaking work that goes into artisanal gold mining. You could imagine my excitement after the second try, Juan and I actually found a few specks of gold! But I couldn’t imagine doing such intense labor for hours on end for weeks at a time, sometimes months, in order to put food on the table. 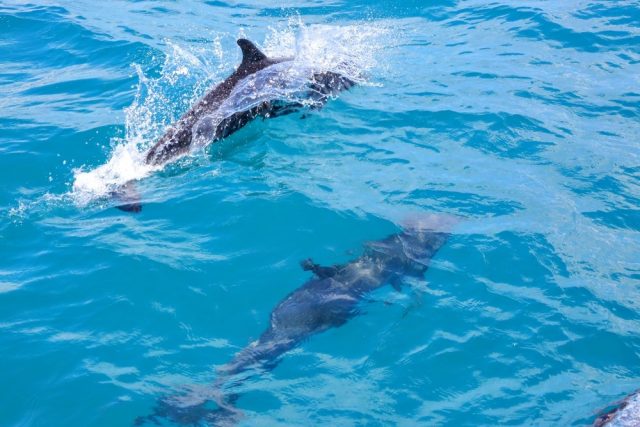 The final stop on my adventure, Drake Bay lies off the peninsula’s northwest coast. Its main beach town, Agujitas, is lined with cute shops, restaurants and bars blaring reggaetón music, but the smaller inland villages are where the real action lies. Away from the water and up a steep hill outside one, Los Planes, you’ll find Naguala Ecolodge, a serene and tucked away ranch with secluded cabins surrounded by vibrant wildlife; a delicious home cooked meals; and a handcrafted wooden yoga platform; and an epic waterfall in close hiking distance. During the day you can hike, swim, lounge, zipline across primary rainforest, go horseback riding, or snorkel out in the bay; at night, it’s all about chilling out, stargazing at the clear night’s sky, and getting to know your fellow guests from around the world.

On our last day in Drake Bay, we hit the  water in a speed boat for an afternoon of snorkelling off Caño Island as well as spotting olive ridley turtles (depending on the season and the luck of the draw, humpback whales and bottle-nose dolphins also put in appearances). Back on shore, our group tucked into a beautiful spread of coconut rice fried with fresh eggs and spices wrapped in banana leaves, accompanied by avocado and cilantro salad, nacho chips with guacamole and refried beans, and vegan bannock with fresh Rancho Quemado cocoa spread. As I watched another docking group of visitors line up for a lunch of white-bread sandwiches on plastic plates (which by the way will be banned in Costa Rica by 2021!), I was saddened by how little passion and responsibility had been put into their outing. As eight of us crammed onto a pair of park benches, sharing, laughing and reminiscing, their group sat awkwardly on the sand away from each other, looking glumly at their sandwiches.

As we finished up and rode off on horseback down the beach to another beautiful lodge overlooking the water, I reflected how grateful I was to experience such a beautiful form of sustainable tourism, and also how thankful I was for the people I had met – the ones who totally made the difference is creating a memorable adventure.

The Osa isn’t a place you can just turn to a guidebook for; it’s the community as a whole  that have come together to provide unique experiences for travellers which they couldn’t uncover on their own. The stories I’ve come away with have shaped my experience and outlook on community tourism, around which I’ll form my future travels. As I reflected on the glowing algae, for example, I totally see why my childlike self came out to play. Meeting new friends, wandering through vibrant jungles, and tasting new foods makes the Osa basically a fantastic eco-theme park for adults, but authentic.

Eighty percent of traveler dollars spent on Lokal Travel’s platform go directly towards the incredible tourism projects it’s is working with in countries all around the world. For more information, check out Lokal’s website here. And for more info on the Osa, click here.