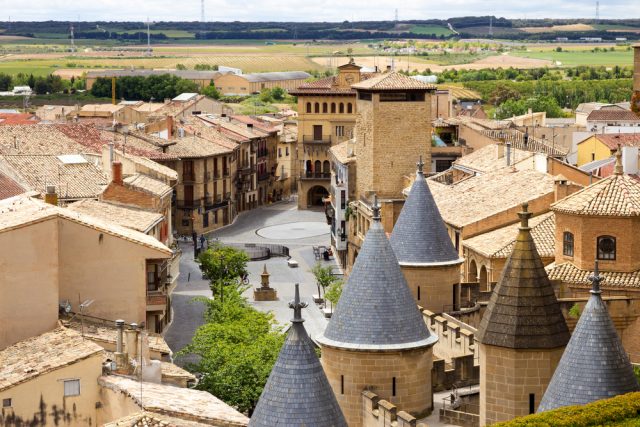 Just a half hour’s drive due south from Navarre‘s capital Pamplona is a small town (pop. barely 4,000) whose old quarter is so redolent of its heyday in the Middle Ages – narrow cobbled streets; seigneurial stone manses with prominent family crests; whimsical towers; a spectacular royal palace – that Olite regularly makes the top-ten lists of Spain’s most charming towns.

Called Erriberri in Basque (spoken in much of Navarre), Olite can boast a history dating back to its 7th-century founding as Oligicus by the Visigothic ruler of the day; it then became the capital of the Kingdom of Navarre for centuries, up until union with Castile in 1512, and that’s why a town that’s relatively tiny by today’s standards can boast such architectural magnificence. The coup de grâce is the crenellated Gothic Royal Palace (below), covering nearly a third of the old quarter, which in addition to atmospheric chambres and courtyards also includes an exhibition on the mediaeval Navarran court. And by the way, you can even overnight here, in the Parador Príncipe de Viana, one of the network of quasi-state-owned paradores (inns) often housed in historic landmarks. 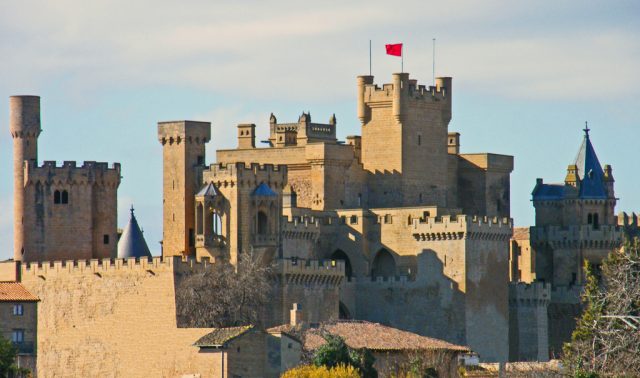 What’s more, this singular spot also has more to offer beyond mediaeval twee. Top of the list is Olite’s status as Navarre wine capital (vienyard tours can be arranged, and there’s a wine museum in town, as well, shared with the town tourism office), closely followed by a delicious culinary scene featuring the likes of stuffed cod, lamb al chilindrón (with tomatoes and peppers), and torrijas, the tasty local take on french toast. A range of accommodations for every budget allows for overnighting and enjoying this magical townscape by lamplit night, as well.

Any time of year is wonderful to visit, of course, but if you can make it in August (booking lodging well in advance, of course!), the highlight of each year is Olite’s Fiestas Medievales (this year, 10-12 Aug.), with all manner of pageantry, jousting, mediaeval markets – and of course, much juggling.