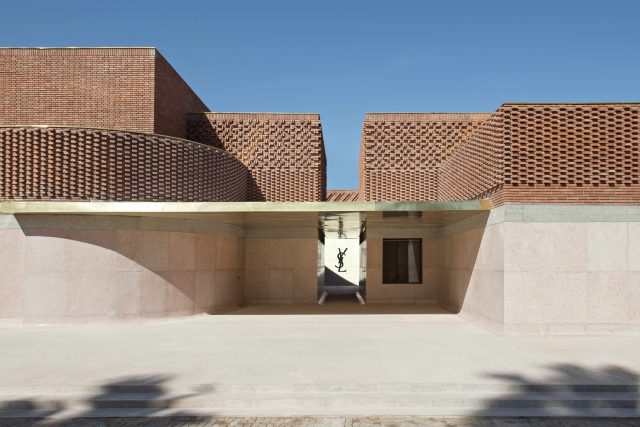 Morocco‘s best known city has long been known as a destination that’s exotic yet not too exotic, with a wonderful balance between traditional Maghrebi culture and Western influences – often but not always driven by expats. Sure, there are plenty of old souks and young belly dancers, along with the snake charmers and water sellers of the famous Jamaa el Fna square on the edge of the mazelike, UNESCO World Heritage old quarter. But there are also plenty of upmarket hotels, boutiques, avant-garde restaurants, and galleries spearheading a thriving contemporary arts scene. It’s that side of Marrakesh I want to talk about today.

The modern side of this country’s most iconic city (and arguably most important of its four historic “Imperial Cities”) is where most locals and expats alike live their lives, and the most prominent of these neighbourhoods is called Gueliz. It’s also become something of a playground for discerning visitors, including plenty of boldface names from the worlds of the arts, entertainment, politics, and more (Beyoncé, Ronaldo, David Beckham, Cameron Diaz, Naomi Campbell, and Nicholas Sarkozy ring a bell?). And annual events such as FIFM (International Film Festival) and International Festival of Music brings in even more every year in December.

Dating back  a century or less, to the French colonial period (1912-56), it’s quite a contrast to the warrenlike old medina area, with broad avenues a mix of early-20th and 21st-century architecture. The main thoroughfares are Avenue Mohamed V and Avenue Mohamed VI (named after Morocco’s current king and his grandfather), lined with most of the city’s most impressive and luxurious hotels (some evoking the style of the riads, traditional Moroccan manses); international fashion and other retail brands;  mostly international-cuisine restaurants; and nightlife open till the wee hours (even – unusually in a Muslim country – a handful of gay clubs).

Speaking of fashion and gay, in terms of attractions and landmarks, front and centre in Gueliz are a couple that are the legacy of legendary French designer Yves Saint-Laurent (1936-2008), born in French Algeria and where he and partner Pierre Bergé spent long stretches since first visiting in 1966,  and bought the Majorelle Garden (below) in 1980, named after the lovely, blue-hued, Moorish/Art Deco masterpiece created by painter Jacques Majorelle in the 1930s and 40s. The couple lived in one of the villas on the property; Saint-Laurent’s ashes were scattered in the rose garden; and today the garden is open to the public, with the painter’s onetime studio turned into a Museum of Islamic Art. 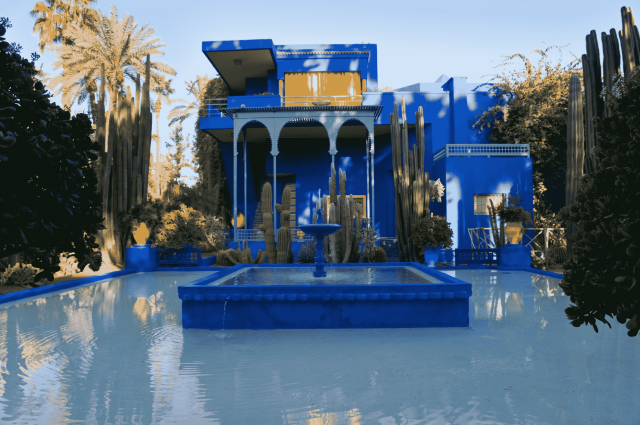 And just this past year, the Yves Saint-Laurent Museum (top) opened just behind the garden, its 4,000 square metres (just over 43,000 sq. feet), including a permanent exhibition of 50 YSL creations including the legendary Mondrian dress as well as assorted accessories; another space hosting rotating fashion exhibits; a 140-seat auditorium; and a research library.

Nouvelle Moroccan cuisine is another piece of the puzzle out here in today’s Marrakesh, with this city taking the lead in this culinary movement. One of its stars is also one of Morocco’s most distinguished chefs, Mohamed Fedal, who has received many international celebrities as well as Moroccan luminaries up to King Mohammed himself at his Dar Moha restaurant (located not in Gueliz, however, but in the old quarter, in the riad once owned by another legendary French designer, Pierre Balmain). He specialises at reinventing and giving a contemporary twist to traditional Maghrebi fare such as tagines, couscous, and pastillas (pigeon pie), incorporating new elements such as pâté de foie gras and refined oil of the argan tree endemic to Morocco.

In short, the modern side of Marrakesh, too, offers a feast for all the senses!