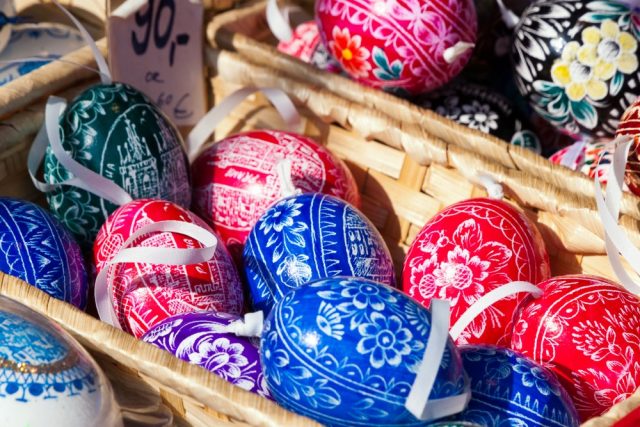 As the cradle of Christianity, the Old Continent’s history with Easter is millennia old.  And though recently it has evolved from a merely religious observance to an secular cultural (even pop cultural) phenomenon, the mix of elaborate religious pageantry and modern developments like bunnies, chicks, and Easter eggs is quite something to experience during Easter week. This blog has covered Spain’s Semana Santa (Holy Week) traditions aplenty, from processions (in general as well as the particularly mediaeval-flavoured one in Zamora, Castile-León) to special seasonal food treats. But quite a few other European countries don their Easter finery, as well, with colourful celebrations that visitors can enjoy as spectators and sometimes even participants. Here are my half-dozen favourites: 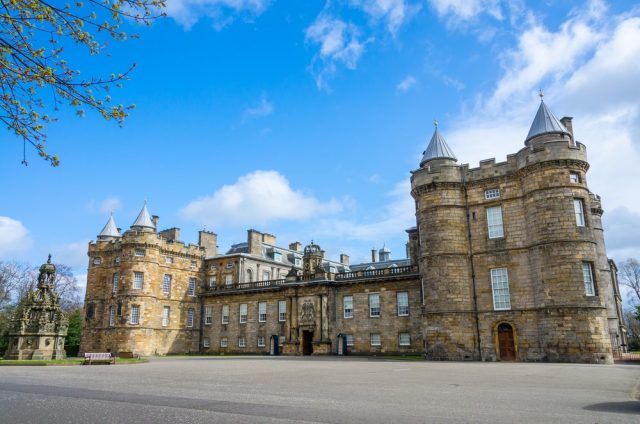 Bunnies, chicks, and eggs are popping up in décor all over town, of course. But several spots are particularly worth your while, especially if you’re travelling with little ones. The local palace of the royal family since the 16th century, Holyroodhouse (above), opens its doors for a commoner-family run; music and storytelling; and the Fabergé Family Fun day, featuring an egg hunt and a “make-your-own” Fabergé egg session. And while you’re here, have a look at the impressive royal apartments and atmospheric abbey ruins.

Meanwhile, covering 28 hectares (70 acres), the 17th-century Royal Botanic Garden hosts an Easter Trail featuring the “Botanics Bunny”. And Edinburgh Castle, dating back to the 12th century and looming over the city’s old quarter, is staging its own fun programme include an egg-and-spoon race, crafts making, Easter treats, and the Alba Puppets Easter Show. More info: Edinburgh.org. 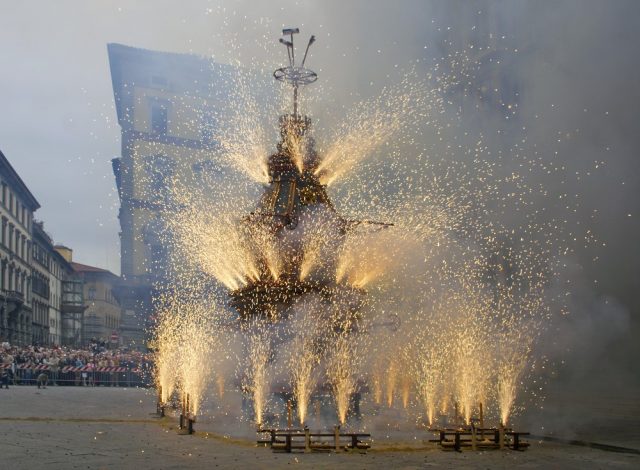 Pascua is big all over Catholic Italy, of course, and many Italians are drama queens par excellence, but nowhere is the observance more dramatic than in Tuscany’s capital, where during Easter Sunday mass in the Duomo a mechanical dove flies from the altar out into a two-storey oxcart in the square outside, setting off spectacular fireworks. Held in honour of a Crusader knight this centuries-old tradition of the Scoppio del Carro (Explosion of the Cart) is supposed to be auspicious for prosperity in the coming year.

Parenthetically, down in Rome, the Pope blesses the torchlit stations of the cross set up near the Colosseum, while in other cities and towns there are processions Friday through Monday involving statues of Jesus Christ and the Virgin Mary, as well as dances, concerts, and sometimes traditional games (check and see what’s on in the places you’re interested in visiting; there will surely be something). 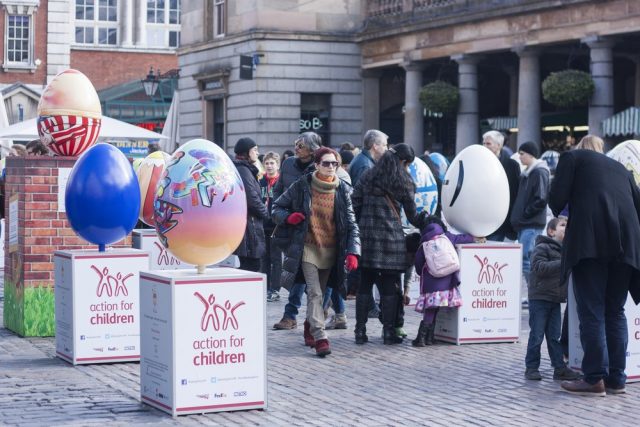 No exploding oxcarts in Britain’s capital, but plenty of elaborate doings around town during this season. Of course Easter mass in grand churches like Westminster Abbey, St Paul’s Cathedral, and St Martin-in-the-Fields is quite an experience, but so is Good Friday’s dramatic re-enactment of the Passion of Christ in Trafalgar Square (above).

For something more interactive and secular, the Horniman Museum, a 1901 manse devoted to anthropology, natural history, and musical instruments, runs an Easter Fair  with games, music, crafts, storytelling, and more, while Covent Garden (above) runs a pop-up-market and various other activities. And did your kids see the recent Peter Rabbit movie? They’ll love the PR-themed days at the famous 18th-century Kew Gardens botanical park, including games and other entertainment, from 20 March to 15 April. Then of course there are the elaborate Easter windows and interior displays at grand department stores such as Harrod’s, Marks & Spencer, and Selfridges. More info:  Visit London. 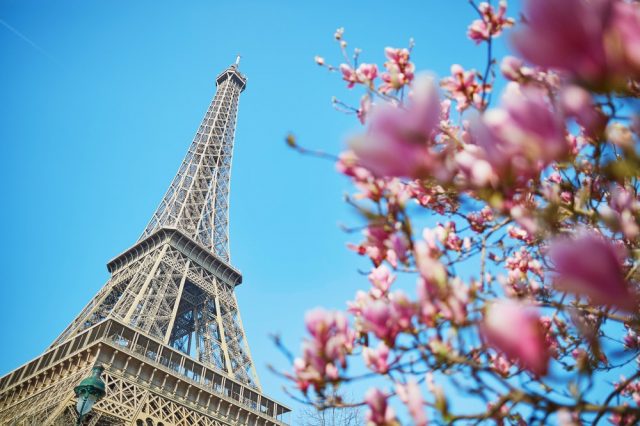 No better time to experience masses in landmark churches like Notre-Dame and Sacré-Coeur (if you can get in!), but there are also plenty of chasses aux oeufs (egg hunts) and other fun family activities all around town (try the one on the Champs de Mars in front of the Eiffel Tower – now there’s a backdrop that can’t be beat!). And Euro Disney – well, you can imagine. Paris’ many exquisite chocolatiers and pâtisseries roll out special Easter treats; churches and other (mostly classical) venues stage special Easter concerts; and if you’re up for splurging, indulge in a special Easter brunch menu at various of the city’s elegant restaurants and hotels. The Paris tourist office can provide specifics at ParisInfo.com. 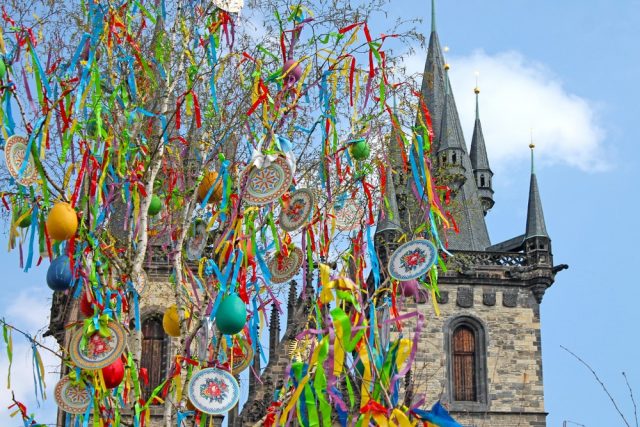 The big thing in the Czech capital is Easter markets held 21 March to 12 April, especially at the foot of Wenceslas Square and in Old Town Square, brimming with traditional food and crafts sellers (get an egg handpainted with your name or any other message). You’ll also find smaller markets on Kampa Island in the Moldau River, Havelská Street, as well as in front of the basilica up in the Prague Castle district (above). Folk music and dance performances take place on a stage set up in Old Town Square, and there are booths where kids can try their own hands at crafts. More info from Prague Tourism.

The Ostermarkt (Easter market) is also big in Catholic Austria’s capital, with the biggest being the dozens of vendors assembled in from of the Schönbrunn Palace from 17 March to 2 April, which also includes activities for kids, in which they make marzipan bunnies and flower arrangements, as well as participate in an egg hunt.  Over in the Innere Stadt (old quarter) the elegant square called Am Hof hosts another, and just a bunny hop away on the gracious 19th-century Freyung square, the Old Viennese Easter Market’s star is being Europe’s biggest tower of eggs – some 40,000! Meanwhile, a little farther from the centre (just 15 minutes by tram), the Kalvarienburg Festival on Kalvarienburggasse not only has crafts and food vendors but music, a kids’ program, and crafts workshops. All this, of course, in addition to the usual special Easter masses, concerts, and meals in the churches, restaurants, and hotels of this grand and elegant Habsburg city. More info.