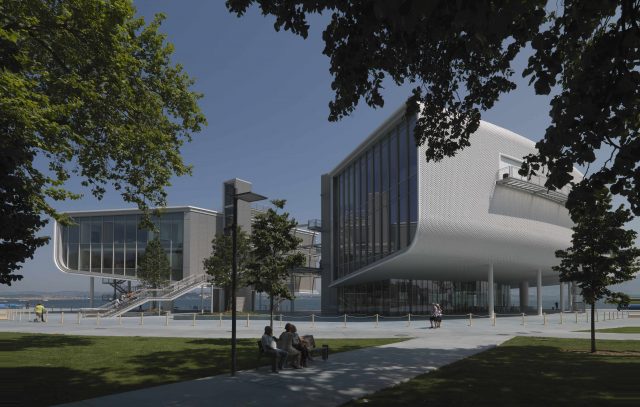 Every contemporary city that keeps pace with the times has at least one structure which ends up becoming its symbol of an era. And for the early 21st century, in Santander on Spain’s north coast, that icon arrived last summer in the form of a world-class modern-art museum called the Centro Botín, first covered in this blog last September. And already, less than a year in, the Botín has not only reinvigorated the cultural scene in the capital of verdant Cantabria province – a city of some 173,000 – but is also becoming a must-visit on Europe’s contemporary-art circuit.

In its prime location, in the Pereda Garden on the bay, just a hop and a skip from Santander’s historic centre, the first thing you notice about this edifice is how it seems to float above ground, supported by stylised, seven-metre (23-foot) columns, allowing the site of the shimmering sea to come through. Above them sit a pair of grand, sleek wedges cantilevered over the water make those who approach it feel puny!

These two structures are connected by an innovative network of glass-steel passageways dubbed the pachinko (after the Japanese vertical pinball game). The west wing is where the exhibitions take place, throughout 2,500 square m (26,910 sq. ft) divided into two enormous spaces, while the east wing is devoted to classrooms, a 300-spectator auditórium, and offices. The whole business is covered with 27,000 round ceramic tiles which lend it a light, luminous feel, reflecting the world around it. All that, in addition to the sweeping bay and city views from the rooftop, make the Botín a must for any visitor to Santander today, even apart from the museum’s highly engaging content.

This modern architectural masterpiece is the work of the firm of Italian “starchitect” Renzo Piano (winner of, among other top honours, the 1998 Pritzker Prize, the Nobel of architecture). Piano has always been noted for his passionate commitment to sustainability as well as his talent for integrating futuristic designs into existing environments. And here he has outdone himself in that regard, with the Botín’s construction leading to an overhaul and expansion of the Pereda Gardens, tripling the size of its green spaces to 20 sq. kilometres (nearly 8 sq. miles) and bringing it right out to the water’s edge. As an interesting punctuation mark, the area in front of the art centre is home to a five-piece sculpture group by National Visual Arts Award recipient Cristina Iglesia. Called From the Underground, these pool- and pondlike structures evoke the fecund subterranean life and the primordial ocean that gave rise to the rest of life on earth.

As for the aforementioned engaging content, the world-class artistic programmes here, designed to bring the arts to the public, cover not just painting and sculpture but also the likes of cinema, theatre, music, and literatura. Most folks experience this, of course, most directly through the many rotating exhibitions, such as the one being inagurated today. Running through 3 June, “Itineraries XXIV” is a collection of works in varios media from eight talented young beneficiaries of Botín Foundation arts grants.

And on 20 March, fans of 20th-century art should be fascinated by Joan Miró: Sculptures 1928-1982, from the Catalan maestro – one of the greatest Spanish artists of all time, and known mostly for his colourful,often whimsical two-dimensional work. The artista once commented that during his walks, he felt the need to assembled the things he encountered along the way in a kind of poetic frenzy – ordinary, everyday ítems that by becoming part of something larger could achieve a new dimension. Of the more than 100 sculptures brought together here many have never been publicly displayed, and this is sure to be one of Spain’s cultural blockbusters of 2018.

Cutting-edge modernity and design paired with an exciting world-class cultural programme – that’s the Botín Centre, and it’s proving to be a pivotal momento for the aristocratic north-coast city of Santander, as the Guggenheim was for Bilbao, 6½ hours west. Come and discover it for yourself!