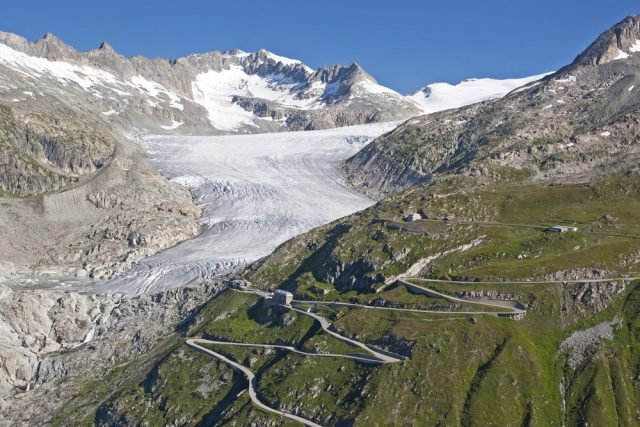 The famously globetrotting superspy franchise has over an astonishing 56 years and two dozen films been especially fond of Europe’s quintessential Alpine country from practically the beginning, with key scenes filmed here for For Your Eyes Only, Goldeneye, Goldfinger, On Her Majesty’s Secret Service, and The World Is Not Enough. But the sadistic, corpulent international businessman Auric Goldfinger has always been one of my favourite Bond villains (movie polls – not to mention the American Film Institute – seem to agree with me), and the cat-and-mouse game he plays with 007 in the eponymous 1964 blockbuster takes place largely here in seriously scenic Switzerland.

After James Bond flies into Geneva, the movie takes viewers to a number of picturesque spots, including the village of Andermatt (above) on the outskirts of which the famous Aurora petrol station (Gotthardstrasse 163) was where 007 leaves Tilly Masterson – who is also after Goldfinger, motivated by revenge – after one of her tyres blows out (thanks to one of the nifty gadgets on Bond’s silver Aston Martin DB5, actually). But the station was attached to the Hotel Aurora, whose owners in 2014 sadly had it torn down to create a new entrance to the hotel. Still, a comfy night’s stay, and jawdropping views, for sure!

At 1,437 metres (4,715 feet) up and with a population of just 1,355, the utterly charming Andermatt lies at the heart of one of the Swiss Alps‘ most celebrated skiing/snowboarding meccas (the closest mountains being Nätschen and Gemsstock), just over three hours’ drive from Geneva. And every March (this year it’s the 16th-17th), it also hosts a big-deal festival called Andermatt Live! with concerts and parties as the winter-sport season heads into its home stretch (until 21 May). 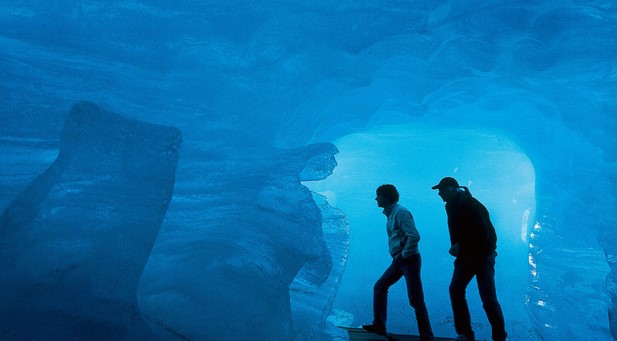 Beyond the spectacular local scenery, the reason this particular stretch of cliff-hugging road through the Furka Pass (top) was chosen was its famous twistiness and sinuousness. And one of my favourite moments during this car chase comes right at the beginning, as we see Goldfinger’s yellow Rolls-Royce Phantom, driven by Korean henchman Oddjob, glide past the now abandoned Belvedere Hotel (see video below), and behind it in the distance, the spectacular Rhône Glacier. Though like most glaciers these days sadly shrinking due to climate change, this river of ice is still a majestic sight indeed, and if you’re an adventurous sort, you can do a guided trek on its surface – or just take the less strenuous option of popping into the ice grotto (above) carved into it – glowing with magical blue light – near the Belvedere. 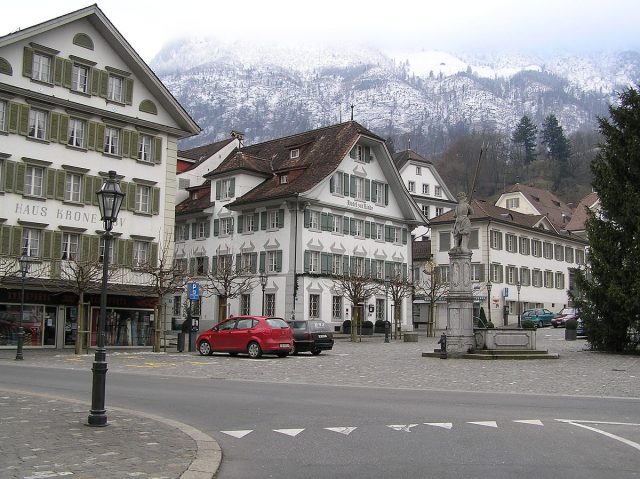 Another noteworthy site is the factory where Goldfinger hatches his nefarious plans. Outside the lovely town of Stans (above, pop. 8,300) and its Stanserhorn mountain, less than an hour from Andermatt and just 20 minutes outside Lucerne, it’s actually 79-year-old Pilatus Aircraft Ltd., which to this day still produces sleek planes for niche markets and military training purposes; you can take a free two-hour tour of the facility – but be sure to book well in advance, they’re crazy popular!

Click here for bargain fares into Geneva, and here for more info on the attractions of spectacular Switzerland!