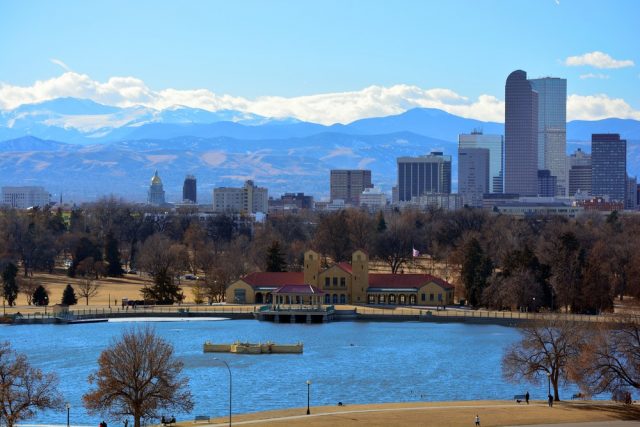 The USA‘s 19th largest city (pop. 693,000, metro area 3.1 million), and at 1,609 metres (5,280 feet) its highest-altitude, has come a long way from its humble beginnings in 1859 as a gold-rush mining town. Sleepy at first, much of the “Mile-High City‘s” growth didn’t pick up steam until the 1890s, with the real boom not kicking in till after World War II. Today, this dynamic, high-tech bastion is a major business, cultural, and sports power which trends young and cosmopolitan without letting go of its outdoors-oriented lifestyle.

Sitting on a rolling plain astride the South Platte River in north central Colorado just east of (not, as many assume, actually in) the Rocky Mountains, Denver has certainly not escaped many of the common urban ills of the early 21st century, but it does tend to be cleaner, more polite, and more progressive than many others in the United States.

The epicentre of it all is original city core, Larimer Square (below, during its annual Chalk Art Festival), now packed with an enticing array of shops, restaurants, and nightspots. But most of the city’s main “sights” to see are not here but rather in nearby districts such as Capitol Hill and LoDo (Lower Downtown, also home to its own slew of upmarket restaurants and watering holes). Main spots to check out include LoDo’s Union Station, its current Beaux-Arts incarnation dating from 1914 and since 2014 including a fancy hotel plus loads of shopping and dining options alongside city and intercity train stations operating from a modern addition.

You can take a free weekday tour of the stately, gold-domed Colorado State Capitol, inaugurated in 1894, as well as the 1906 Denver Mint, a major source of the U.S. currency in circulation. One real mustn’t-miss is the Molly Brown House, the 1880s home of the “unsinkable Molly Brown“, the rags-to-riches society lady and social-justice philanthropist who was dubbed “unsinkable” (even inspiring Broadway and movie musicals) because she survived the Titanic disaster. Some of these highlights and more are included on Denver Free Walking Tours, a nonprofit (obviously) run by a local guide cooperative (they’ve got ghost tours, too!). 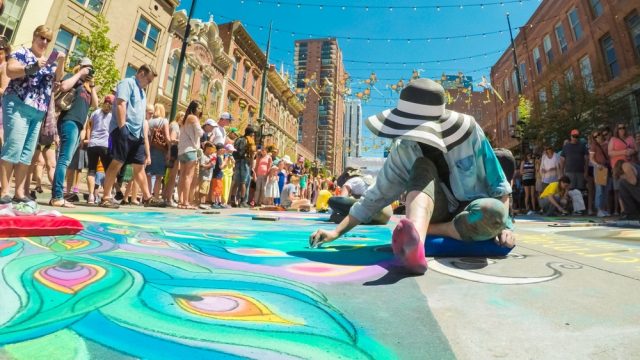 There are several great museums definitely worth your time, as well. The 125-year-old Denver Art Museum is these days housed in boxy gray quarters with a daringly angular annex, with a collection dating from ancient China and pre-Columbian Mexico to old European and American masters to contemporary, including the likes of Georgia O’Keeffe, Henri Matisse, Marcel Duchamp, Pablo Picasso, and Andy Warhol. For all modern, all the time, the Museum of Contemporary Art offers for your delectation exciting rotating exhibits that have included names like Damien Hirst and Chris Ofili. And since you’re out West, I highly recommend the smallish American Museum of Western Art, covering the early 19th century to the present day.

History is well covered hereabouts, too, starting with the six-year-old History Colorado Center, with a great multimedia presentation of the subject reaching back into pre-Columbian times. Also pretty cool, the open-air Four-Mile Historic Park is just under five hectares (12 acres) centred around Denver’s oldest remaining house, dating back to 1859. And for an unusual take on Old West history, I find the townhouse-based Black American West Museum quite an interesting visit, too.

Mums and dads might also be interested to learn that a number of great local attractions make Denver a particularly charming family destination, starting with the 32-hectare (80-acre) Denver Zoo – 122 years old and the first in the USA to use naturalistic indoor/outdoor enclosures instead of cages. The Downtown Aquarium (on Water Street, no less!) includes a 4D theatre and a restaurant surrounded by water, and the Denver Botanic Gardens, divided between three locations, is classified as one of the USA’s top five. The Children’s Museum of Denver recently got a major expansion that brings it into the country’s top tier, as well. Finally, theme park fans will get a kick out of Elitch Gardens (still keeping things exciting after 128 years) and Water World.

The arts are way big here, too, from way back; even as a rough-and-tumble frontier town, Denver had a dozen theatres before it had a hospital. Some of the historic classics are still around, such as the Historic Eltich Theatre and the Mayan Theatre, variously showing live performances and movies, while the newer Denver Performing Arts complex hosts a variety of productions as well as Broadway road shows.

Other neighbourhoods to keep in mind include River North (RiNo) for hipster bars and cool street art; Lower Highlands (LoHi) and South Broadway for great eateries and live music; Cherry Creek for glam; and Santa Fe for arts, theater and museums.” Keep in mind, too, that one particular type of establishment that the city has become especially known for in recent years is brew pubs/microbreweries, with dozens of great options to choose from (to get a sense of what’s here, check out this Denver brewery guide).

Finally, if you want to get a taste of quintessential American sport while here, there are quite a few options, with the most prominent being the home games of American football’s Denver Broncos (the season runs September though December) and Denver Nuggets basketball team (mid-October to mid-June).

Accommodations, by the way, of course run the gamut, and if you want to stay in upmarket, historic style, consider the Brown Palace (1892) and the Oxford (1891).